For anyone who paid attention to the Scout class figures offered for the fisrt movie, you know that it was all Cybertron rehash. Most of them were unfortunate pegwarmers for Target, who had the rights for the Scouts. Hasbro has fortunately seen the value of a scout class, especially in these tough economic times. Therefore, for this go around, we get new molds. The first to be reviewed here is the Decepticon Dead End.

Even other Decepticons think Dead End is creepy. He's quiet most of the time, and when he's not it's usually to either snarl or say something weird. Even in robot mode, he creeps around on all fours. He refuels by siphoning energy from other robots. If he can't find Autobots to steal from, he quietly attaches his filters to other Decepticons wen they're not paying attention, and slowly drains them dry. 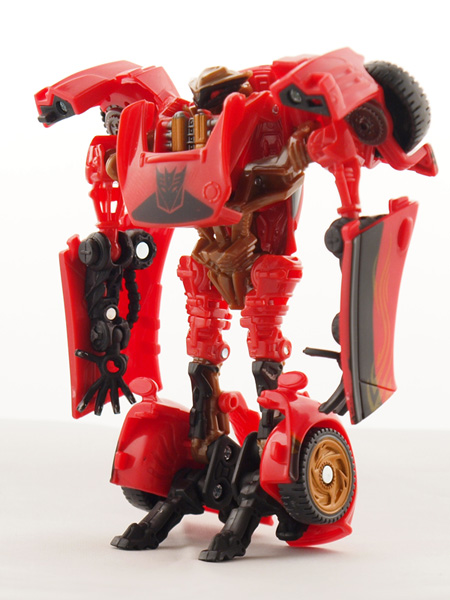 Dead End looks as creepy in robot mode as his bio suggests. He has a mixture of red, gold and black throughout. For being a scout class, he has a remarkable amount of detail built into him. This includes the arms, which featured 5-digited hands. The head sculpt is minimal, but fits the tone for the character. 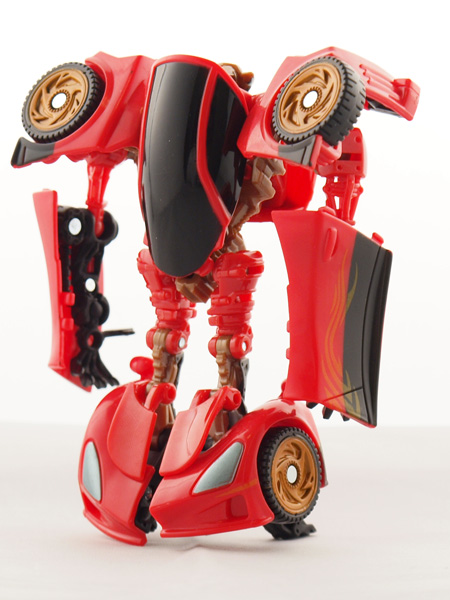 Being a scout class figure usually means some compromise on articulation or excessive kibble. There's little of either with Dead End. Sure, the door panels on the forearms might look a bit large, and you could point to the wheels hanging off his shoulders, but he does pack a remarkable amount of articulation. The only fall point would be that the elbow sockets are a bit sloppy. 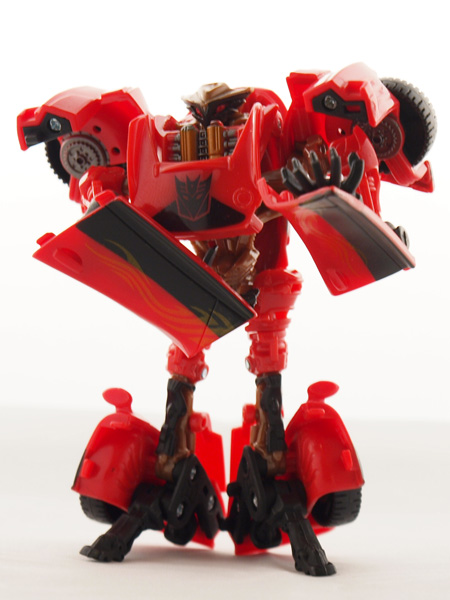 
There's lots of flexibility in the posing department. The only downer is a lack of a rotating head.

Rotate the forearms so the door panels face back. Align the door panels to the rear wheels. Pull on his back so that the chest flips around to form the rear end. Pull out the panel with the Decepticon insignia in a half moon motion to form the decklid. Fold up the feet so that the foot and the haunch are flat. Rotate the front wheels so the hood aligns with the cockpit. Peg both feet together. Fold the rear wheels inward, making sure to align all the panels and pegs in place 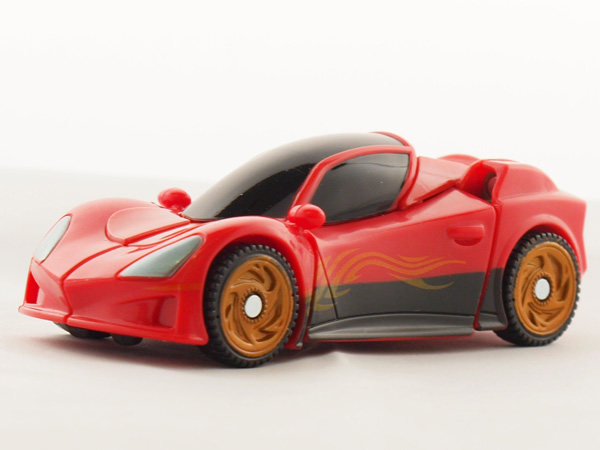 His alt form is a small sports coupe. Mainly red in color, the lower side panels are draped in black. You can also make out a faint flowing flame accent on the doors. The wheels are done in copper, with the rim design being a sawtooth type. You can make out a detailed engine behind the cockpit 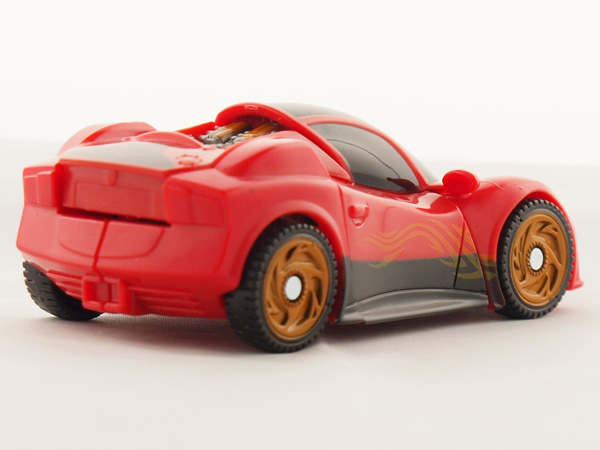 The design is very Hot-Wheels oriented, but is a nice, flowing design. Besides the silver painted headlights, there are no other painted details. Look hard enough, though, and the details are there, including the taillights and single port exhaust. Overall a pretty slick car.

If this figure is any indication of how other Scout classes will be designed, they just might become the surprise hit of the lineup.