It's a treat that not only with the new movie are we getting unique Scout class molds, but also alt modes that are rarely portrayed. There has only been a couple of times that a forklift has been used as an alt mode, after all. Dirt Boss, while an interesting name for such equipment, becomes the latest offering.

Though he is usually occupied acting as a servant to larger, more powerful Decepticons, Dirt Boss has big plans. He constantly schemes to acquire more power, laying plans to betray or discredit his competitors and superiors in the hope of taking their positions. in combat, his body is as surprisingly agile as his mind. It's not uncommon to see him leaping through the air towards the enemy, with all his weapons blazing. 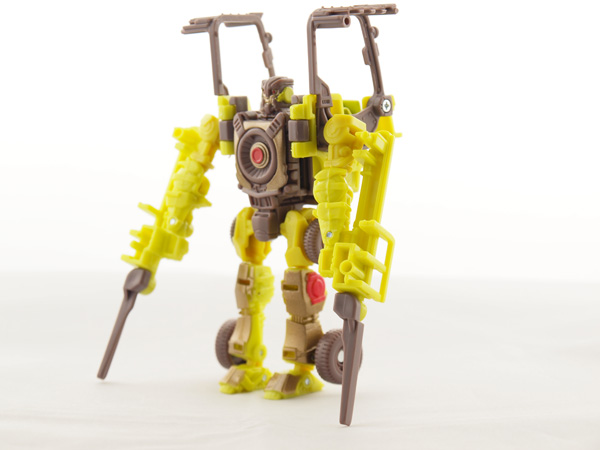 Although small in stature, he certainly looks like he'd hold his own. His limbs are primarily fluorescent green, with the body being done mostly in gray. A red orb on his chest breaks up the gray apps. You'll also see some red on his legs. Each arm carries a fork, which can be used as a sword. The head sculpt has a surprising amount of detail despite the size. 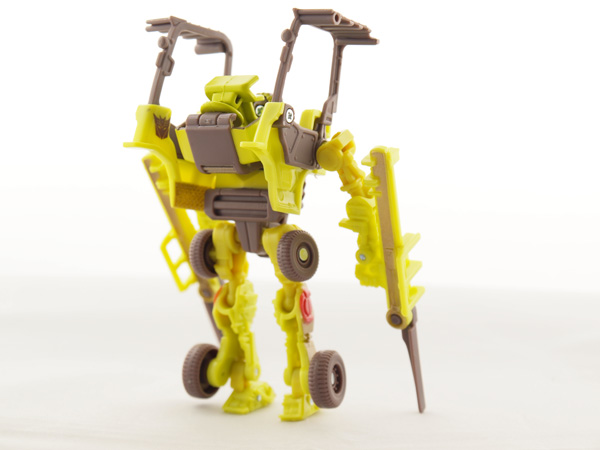 Although the figure has a moderate amount of kibble, it blends in well. His "backpack" (which becomes his cockpit interior) is concealed by the side panels. The forks, while making it difficult to do poses without moving his arms aside, serve a battle purpose that isn't hard to imagine. The only thing that stick out are the canopy halves. 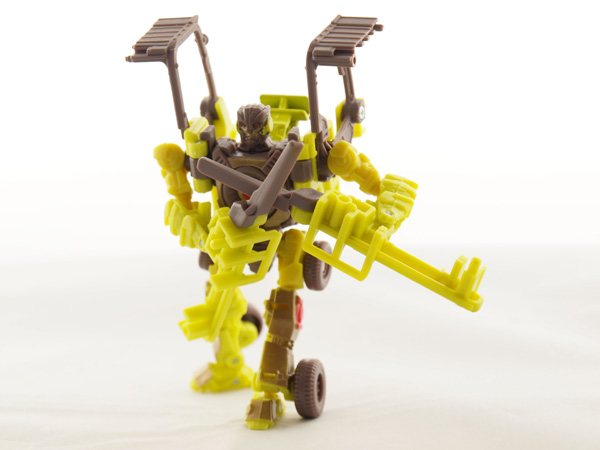 
Leg posing is hindered slightly by the wheel on his thigh. Also, the arms may restrict some standing poses.

Rotate and spread out the arms so the ball joint allows the arms to fold backwards. Fold out the boom on each arm and position the forks perpendicular to the boom. Fold back the arms, then flip each canopy side in half moon fashion until they merge in the front. Don't forget to align the various pegs. Slide the legs up so the head is recessed. Unfold the backpack and push the cockpit interior through the back opening of the canopy (it's a tight fit). Flip the feet back, and finish up by folding the legs into the bottom of the lift. The legs secure to the body via a pair of tabs. 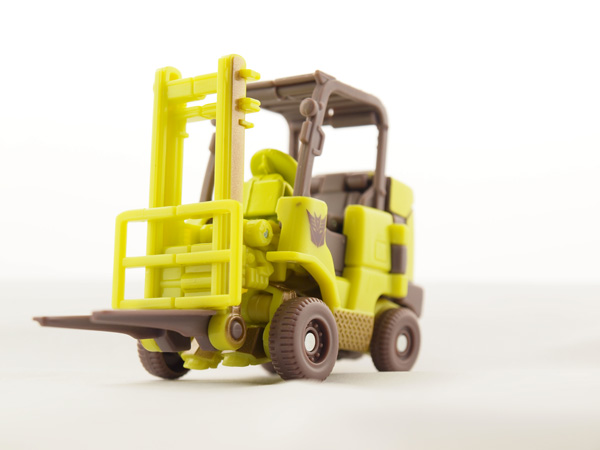 Dirt Boss uses the alt form of a warehouse capacity forklift. He retains the fluorescent green and gray paint scheme. In the cockpit, you can make out the driver's seat as well as a steering wheel, complete with a speed turn knob. He also has diamond plated skid plates on either side of the cockpit towards ground level. 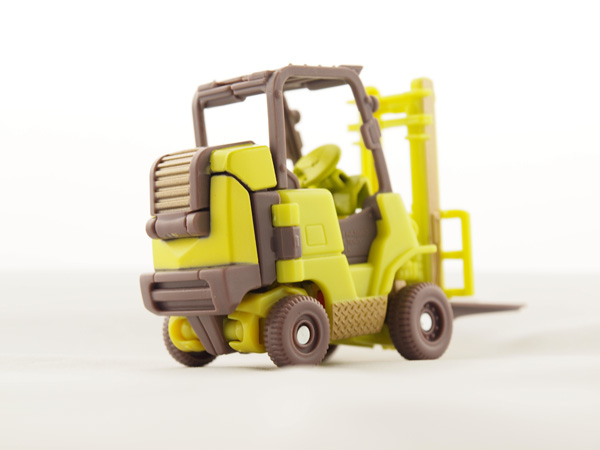 The scouts this time around pack a good amount of detail. You can make out hydraulics and a load guard on the fork boom, and said boom does tilt to about 30 degrees. However, there is no lift. You can also spot a radiator on the rear of the lift. There are headlights built into the canopy of the lift, as well. I have to admit that I find myself continually impressed with these scouts.

Overall good design, some kibble does get in the way
Alt Mode:

A good design for a normally untapped vehicle mode. The level of detail of the Scout class sets a new bar for the size.