In 2007's movie, Megatron gets killed off by a human and dropped into the darkest depths of the seas. Sounds like he's done, right? WRONG! Megatron has been pieced back together and is looking for vengence. For the fans, this means an all new mode in two classes. This review will look at the Leader class figure.

Rebuilt with parts cannibalized from other Decepticons, Megatron rises once again to lead his army. Though the Allspark destroyed him once, he can now feel its power coursing though his circuitry. It calls him to seize his rightful place as ruler over the puny planet on which he was imprisoned and destroyed, and from which he will launch his conquest of the universe. Optimus Prime is all that stands between him and victory, and the Autobot leader has done a poor job of hiding himself. At long last, Megatron knows exactly where his enemy is, and he has power enough to destroy him. 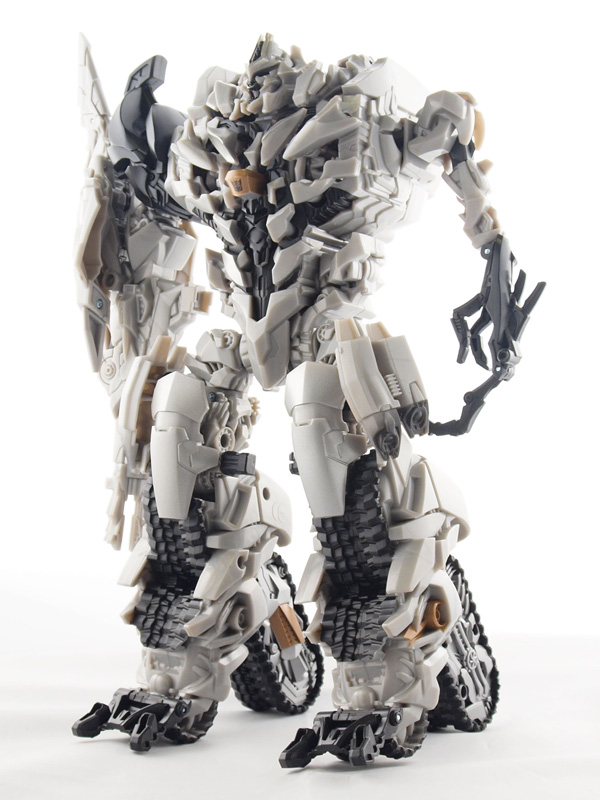 Compared to 2007's model, he's definitely gotten a new look. It's also a better look, for the most part. Gone are all the flashy blues and pinks. Now, he sports a gray and black motif. You can catch a tiny glimpse of gold on the chest. The new head sculpt does Megatron much more justice than his last Leader class figure. 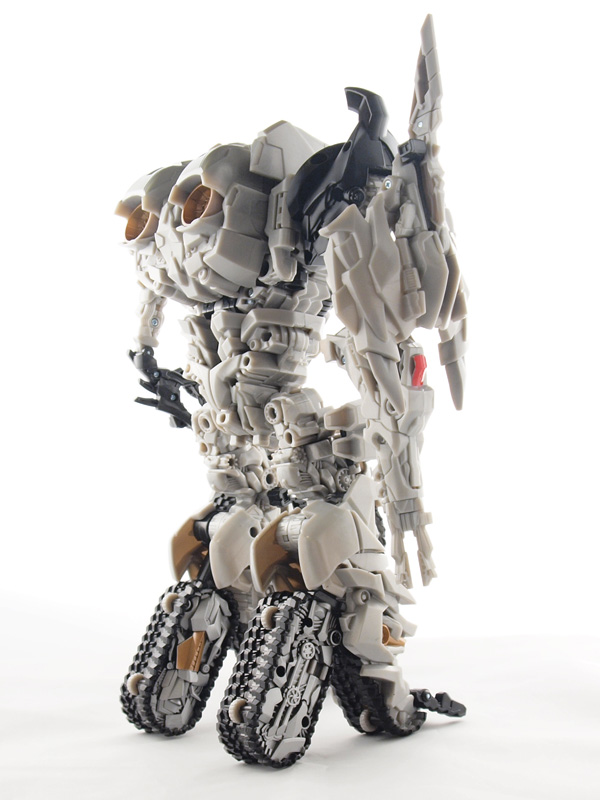 Some may take issues with the asymmetrical arms. The right arm is a cannon, complete with launchable missile. Also attached to this arm is a combat knife. Activating a lever on top of the shoulder will flip down the blade. To finish up, flip the shoulder stock in a half moon to replace the barrel with the knife. The missile is still launchable in this mode. Don't move the shoulder around too much, unless you like the sound of fireblast every time you give it a click. The left arm looks very improv, with a 3 clawed hand. The middle finger is jointed.

With every Leader class figure comes electronics. We've already discussed the right arm. The other big gimmick is with the chest. Pulling down the gold lever on his chest does a couple of things. One, it activates a blinking red LED in both the chest and head. The mouth and eyes will blink red. Two, you will see a series of gears move around inside either side of his chest. Finally, in case you forgot which figure this is, the lever will remind you. Lot of activity for one lever. 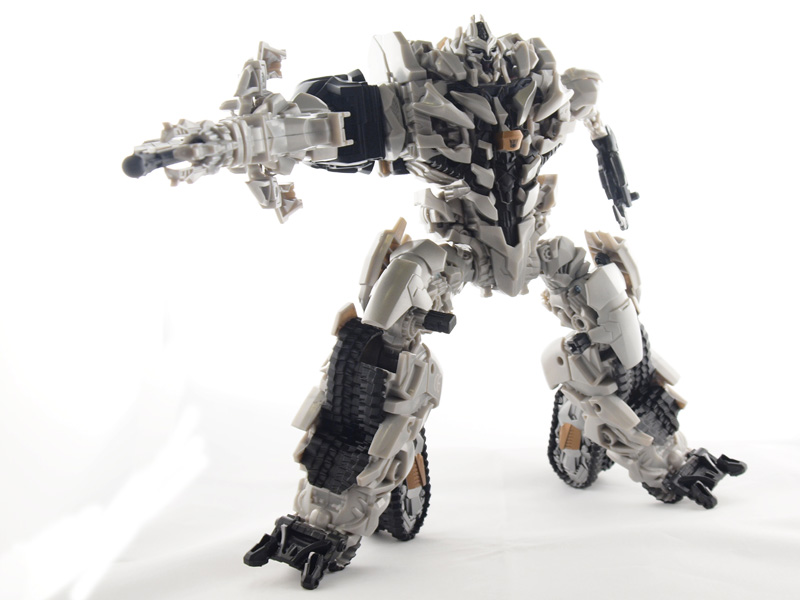 
The legs are very solid thanks to the footprint. Arm action is somewhat limited due to a lack of a right elbow. Also, the head is pretty much pointed straight.

Start by pulling both shoulders away. Fold the feet upward to form the treads. Pull both hips apart from the waist and form a 90 degree spread. If the right arm falls off, no worries. The pin system keeping it on is mediocre and attaches back on easily. Rotate the hips so the black tabs face the front. A transform up sound will be heard when you rotate the left leg. Pull his back from the chest and flip it around until it attaches to his groin. The exhaust ports should be pointing towards the ground.

Rotate the legs (keeping the hips in place) so the black tabs now face the chest. Flip in the left arm so that this hand lays on the right behind his head. Be sure to fold the middle finger completely in. Rotate the right arm so the cannon faces up above his head. Flip the right shoulder and the cannon should snap into place via a peg and tab. Fold in the legs, aligning the black tabs to where his shoulders were. The right tab will go in with a convincing click, the left tab with a less assuring click. Pull the knee guards forward so they protect the rise in the tread. Now, pull the back tread out, rotating it so the gold portion faces the outside. Fold it until it's all the way in the back. There is a tab system for each rear tread to clip to. 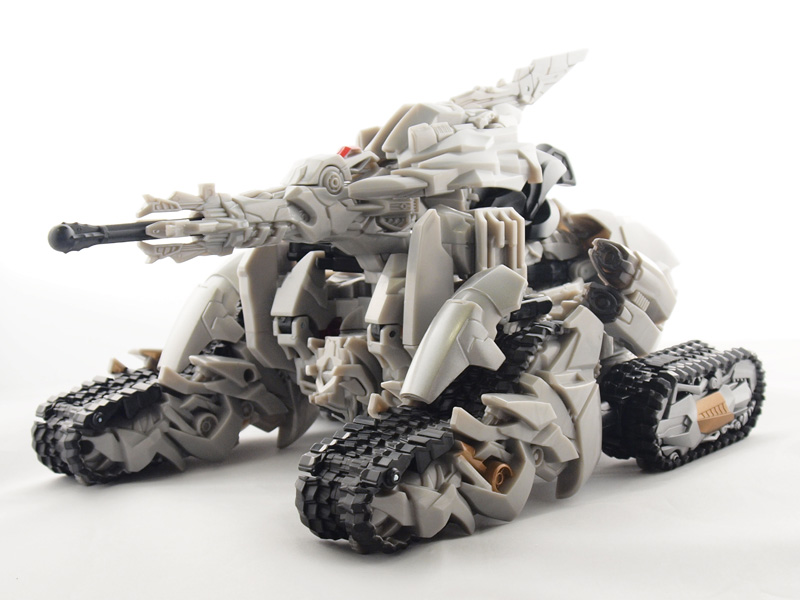 The end result after all that transforming is a very sinister Cybertronian tank. The treads are plastic, but have an almost rubbery feel to them and are intricately grooved. There are 6 molded wheels (2 up front, 4 in the rear) that help roll the tank along. You'll note that in the transform instructions, I didn't move the head up as the instructions let on. That's because I hate any Transformer with it's head showing in alt mode. I prefer to keep it down. 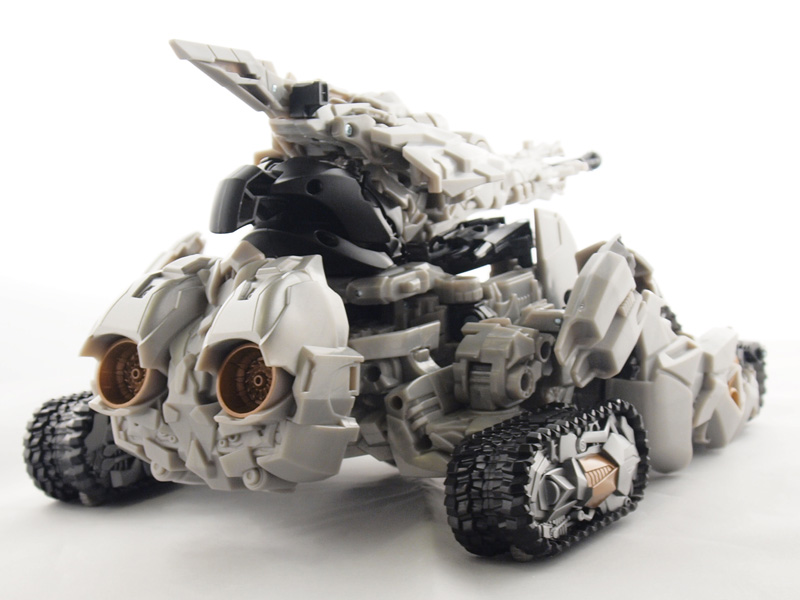 As much detail as there is, the tank is lacking in crucial areas. Mainly, the turret cannot be moved... at all. No rotational and very limited tilting options are available. Also, there are no electronic effects available in tank mode (which could be good or bad). From a distance, the tank looks killer. From close up, though, there's too many gaps to enjoy it much.

Leagues better than the 2007 Leader figure, but it still has it's letdowns.