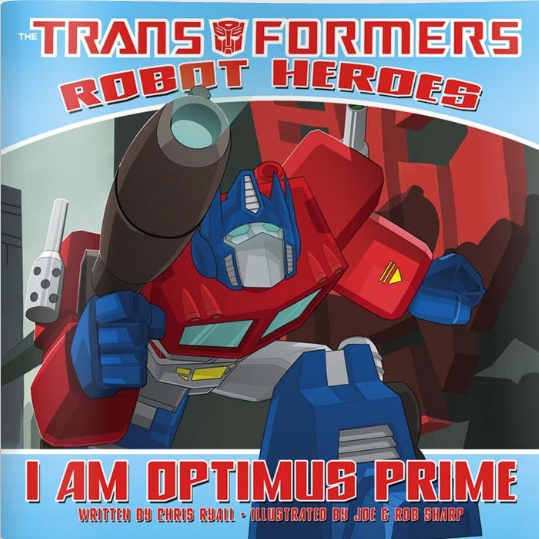 I am Optimus Prime is a children’s book based on the Robot Heroes line. It is an introductory book, no real story, just an establishment of setting with a hero and villain roll call.

The book has a crisp clear cartoony style that evokes the feeling of the toys it’s based on. Friendly and bright, Megatron smiles kindly as he informs us we are doomed. Like the line it’s based on, this totally works here.

The physical quality of the book is great too, hard cover, high quality paper and print. Parents familiar with the cost of children’s books, especially of the licensed variety, will find good value for their money. 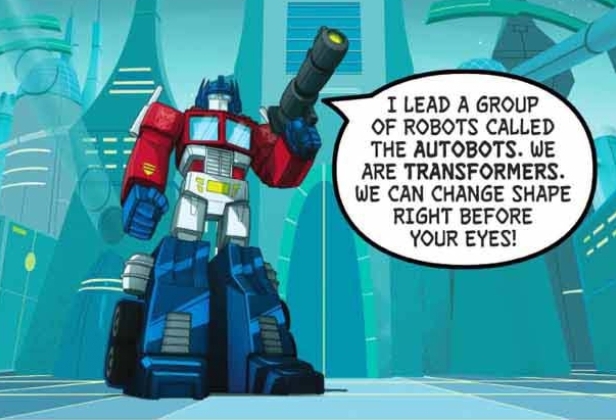 Overall, this is a great Transformer kids book. A cut above what we’ve come to expect in this arena. With any luck they’ll make a dozen more of these. It’s clear a lot of thought and effort went into this, and the result is a book kids can enjoy, and even older fans will get a kick out of.

There are lots of fan nods in here if you look, alt modes from More than Meets the Eye. Primus’ Shadow behind Prime in the light of the Matrix. Little things that ad depth.

I am Optimus Prime would be perfect (apart from saying the Ark is under water only to show it crashed on the next page, G1 style) except for one critical issue.

For those who don’t know, and that’s still probably a lot, Drift is IDW’s attempt to add a character to the G1 universe. In my recent review of his Spotlight comic I expounded my opinion on the success, thus far, of this attempt.

The jury is still out on Drift, he’s really still just IDW’s “fan character” and including him in this introductory level story as if he has significance in the fiction is disingenuous at best.

So premature is Drifts’ inclusion that to my knowledge this is the first time his earth mode as appeared in print! His part in the book is understated, given the circumstance I felt like it was as if they knew they shouldn’t be including him but were hoping no one would notice.

He’s portrayed as mute, not the case in his comic appearances. 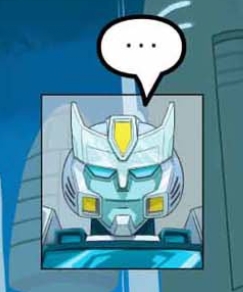 Then there’s this picture…

Worse than the philosophical implications, it’s really distracting. Case in point, half this review is about his random inclusion. It’s the elephant in the book. In their attempt to retcon Drift into continuity via this stripped down iteration of the Transformers, all IDW has done is illuminate how out of place Drift still is. I know an Ironhide fan or two who will be deeply offended.

I don’t mind Drift, I hope he works out for IDW, but he does not belong here. I’m all for experimenting with the fiction, but leave my kids out of it. There is something about this that feels like finding a store clerk whispering to your child behind you telling them to ask for a toy. In the next book I fully expect a panel of Starscream reading a 30 Days of Night trade.

The great concept, art, and quality of this book overcome this foible, it’s just annoying.