The Leader class didn't have much diversity last year. A couple of Primes, a Megatron and a redo of Brawl. At least this time around, we have more originality. Along with a all-new Prime and a Megatron, we have been bestowed upon the old coot known as Jetfire.

Jetfire grew tired of war a long time ago. The reckless ambition of the Decepticons, and the senseless violence of their war sickened him, and so he left Cybertron to go into hiding. The form he eventually chose on Earth seemed appropriate for one who wished to remain unseen. He slumbered in peace for years. Now, reawakened by the arrival of the war on Earth, he decides again to enter the fight - this time on the side of the Autobot, and this time to end it for good, whatever the cost. 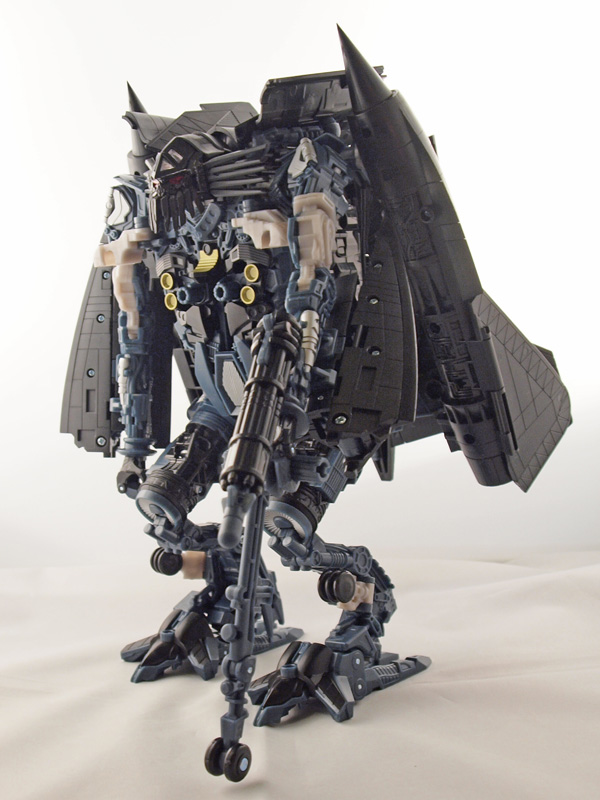 Jetfire certainly has the "old coot" image down pact. He is mostly a cobalt blue with some black in various spots. You'll also note some light green, PVC gray and silver appliques. He has a gun that attaches just above the wrist on his left hand. The gun features a launchable missile. He also has a cane that can be used by either hand. It doesn't firmly attach, so it does tend to wiggle around a bit. 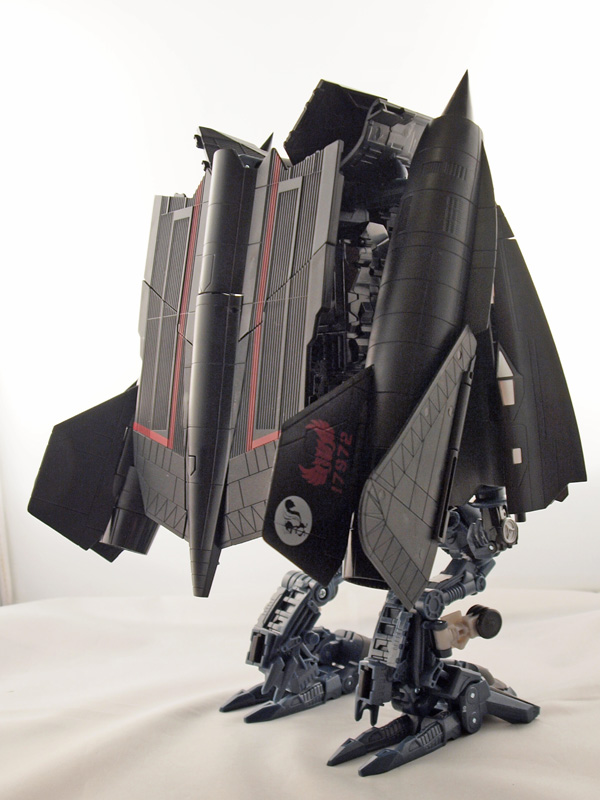 Speaking of wiggling, there's alot of that going on with the Mech Alive gimmick. Pulling down on the gimmick will do the following:

1) Light up the eyes and chest
2) Move internal gears in his chest
3) Cause his head to shake to the left and right
4) Cause him to say "Jetfire's my name."


It's kind of underwhelming, especially with the soft spoken voice used. The head is interesting, with a faux cockpit on his forehead. The "beard" and "whiskers" are all rubber and the eyes are red. Overall he's not too bad. The arms might seem a bit skinny, but given the transform sequence they have to be. 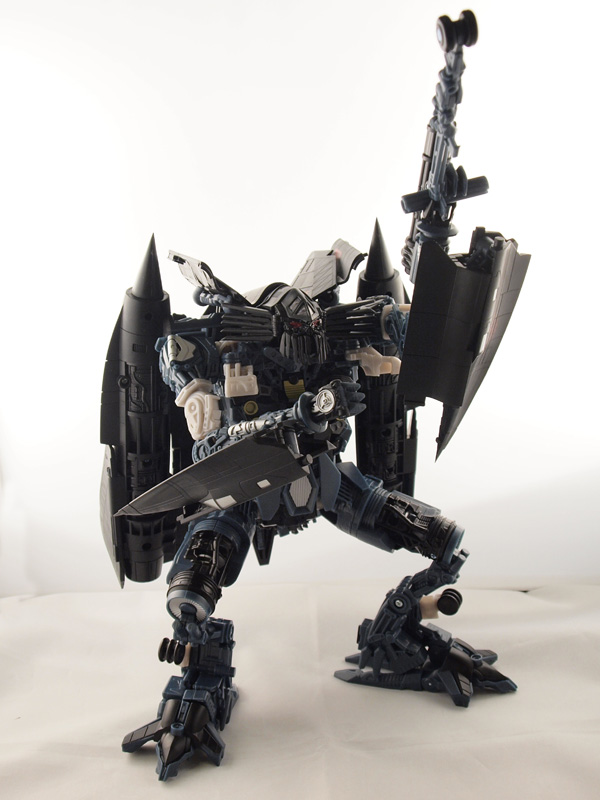 
You have to use some care posing the legs, as the joints will collapse somewhat easy. Kibble on forearms and sides can restrict articulation some.

It should be noted that there are a variety of small tabs and pegs that need to be aligned to transform. These tabs/pegs routinely don't hold until everything is in place, so time and patience is essential. Remove the gun and cane. Fold the whiskers forward as far as you can. Pull up and out on the engines. Pull out the flaps that sit beside his head, but under the larger flaps (they say JTFR). Fold down the topmost flaps, then rotate the smaller flaps in place so that the straight edge ends face forward. Lock the flaps together using the peg, then lock them in place to the larger flaps. Lift up on the back panel and slide it forward into place.

Pull the back apart from the chest. A transform down sound will follow. Spread the 2 apart so the back (housing the soundbox) sits below the chest. Fold the back panels onto the chest, watching the 2 loose flaps to make sure they clear. Rotate the engines 90 degrees so that the spires point upward. Spread the arms out 90 degrees. Fold out and connect the two nose halves then rotate the arms 180 degrees. The next part is easier if you bend the elbows slightly. Fold up the shoulders and join the 2 nose halves together using a series of pegs and tabs. Fold up the nose and attach it to the rest of the plane.

Fold out the stabilizers on the engine assemblies, then fold them back in. If done right, there are tabs that clip to the underside of the rear assembly and it will look seamless topside. It may take a couple of tries. Take the two bungeed halves and connect them together. They are meant to lay loose along his belly by the soundbox. Fold the haunches of his feet around and into the feet. Fold the feet straight down and rotate the lower legs 90 degrees out. You will note a peg sticking out from his foot area. As you rotate the hips 180 degrees into the plane belly, this peg lines up into a hole in the underside. If done right, the knees will be angled out forward. Rotate the hands under the nose so the palms face down. Open both hands. The cane will bend near the wheel. With the wheel facing back, hook the cane into the hands and close the fists back up. There is a tab on the cane that will help align the front wheel. Attach the gun back on the clip of the nose. Adjust the landing gear and wings to finish. 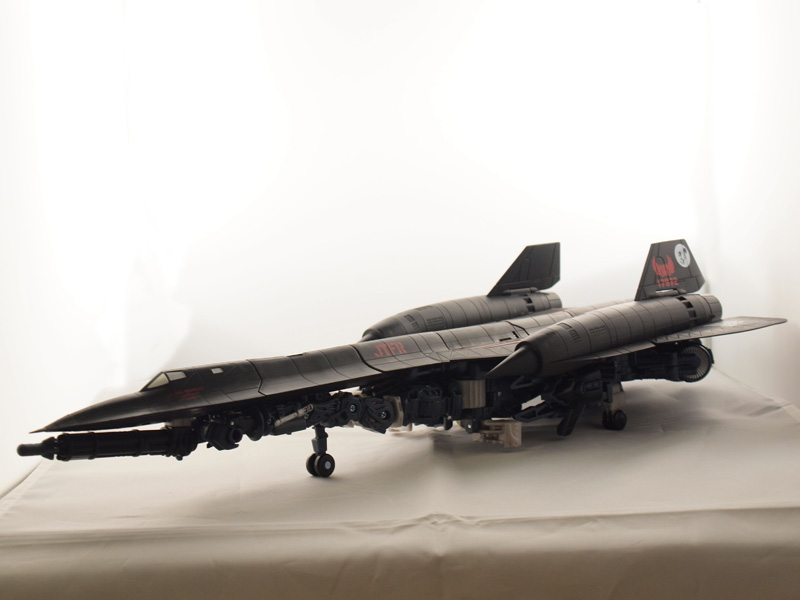 Jetfire's alt mode is a SR-71 Blackbird jet. The jet is almost all black with some red accents. Details include pilot information below the cockpit, the infamous "Skunk Works" loge on the stabilizer and a winged Decepticon insigina, along with "17972". There is also a scratched Decepticon insignia on each wing. Finally, there is the aforementioned "JTFR" behind the cockpit. 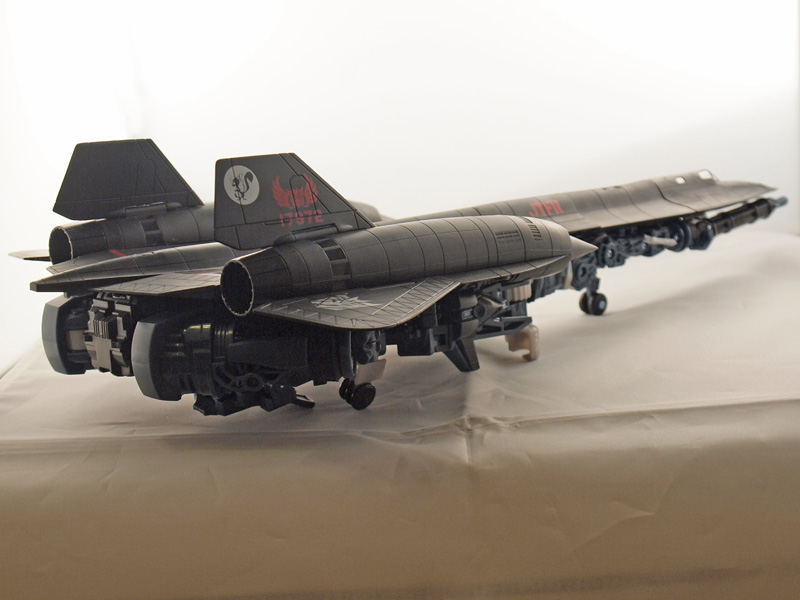 Jetfire does sport 3pc landing gear that is retractable. Although the top of the jet is splendid, the bottom of the jet is less so. Although not outwardly looking like a folded up robot, it does clutter up the profile of the jet. As for sounds, pushing a small button on the tail of the plane will emit a flyby sound.


We're not done yet, folks. Jetfire can remain in jet mode. However, get your Leader class Optimus Prime out and have him ready in Robot mode, because we're gonna combine the two!

Detach the engines and spread them out and forward. Rotate the hips out 180 degrees. Rotate and position the legs like you're going to transform him into robot mode EXCEPT leave the haunches in place. Instead, pull what was the lower leg assmebly towards the back. Rotate the feet 180 degrees so the toes point back. Pull the two bungeed pieces apart. Take the two PVC gray tabs towards the front and flip them down. These two previously useless parts are about to serve their purpose. There is also a blue section above the soundbox that flips out.

Remove the gun and cane from the nose. Detach the two nose halves and fold them back 90 degrees. Rotate the arms so the cockpit halves face towards the plane belly. Detach the rearmost part of the plane (it's on tabs). Fold down the two blue halves to expose a grip and a barrel. Now, take the landing gear and position it so the cane handles fit in the circular groove inside the section. Fold the section into the cane to complete the gun.

From robot mode, fold the rear wheel fenders so they point down. Rotate out the panels on his back so they look like wings. Fold out the feet so that the toes point down, but the soles point back. Now, you're ready.

First the feet. Place Optimus in front of Jetfire. There are tabs on Prime's feet that will correspond with tabs on Jetfire's haunches. Connect them. Next, Next, the waist. Connect the blue tab to Prime's crotch. However, it's not necessary to do so and it will restrict leg movement some. Next, take the two bungeed tabs, bring them around to Prime's abdomen, and lock them in place to form a guard. The gray tabs on the back are supposed to hook on to the tabs behind Prime's shoulders, but don't do so very well. As long as you have the waist band and feet hooked up, it'll be stable. The gun fits in either hand by slipping the grip into his hand and locking the tabs in place. 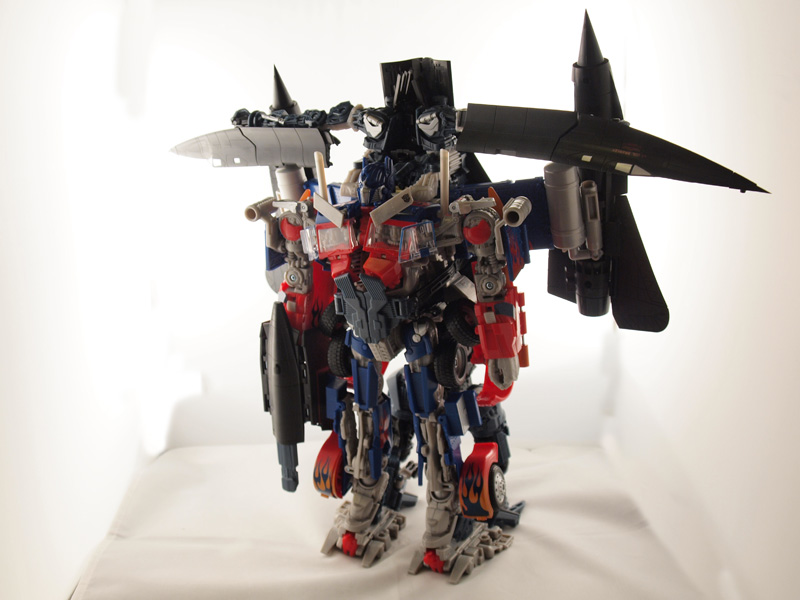 How you might view Super Prime depends on which angle you look at him from. From the front and a 3/4 perspective, he looks impressive enough. However, from the side it's less impressive. The legs don't bond together too well, which causes a gap. This also causes Prime's legs to have no knee articulation, as well as marginal hip movement. Still, it does add some value to both figures. Just not as much as one might have hoped.

Very accurate jet mode on top, not so much on the sides or bottom.
Super Mode:

Not perfect by any means, but when viewed from the right angle it looks great
Overall:

It has it's flaws, but the pluses that it bears makes it hard to pass up.