So far, it's been somewhat mediocre in the Constructicons department. Demolisher had a great alt mode but a terrible robot mode. Rampage's rearward kibble took away from an otherwise impressive figure. Mixmaster had a battle mode more reminiscent of post-battle artwork. Now, we come to the 4th member, Long Haul.

Long Haul is too bitter to be an effective soldier on his own. Despite the fact that he is part of one of the most destructive and terrifying Decepticon squads of all time, he is too often treated as little more than a cargo hauler. Other Decepticons sling their gear into his bed without a second thought, and order him to carry it around for them Rather than confront them, he'd rather grumble about it privately, then stop on the way and destroy whatever he's been given responsibility for. 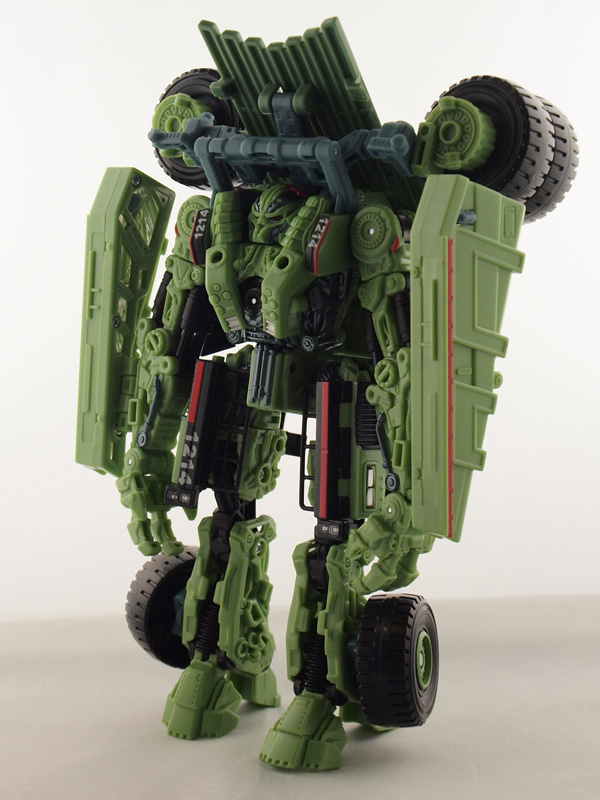 Surprisingly, Long Haul is a more traditional Constructicon when it comes to looks. He is mostly construction green with some black and bluish gray apps. Seeing his photo pics, you would think he's bulky. However, in person he's more proportionate. The head sculpt is also more traditional looking than with the other Decepticons. The eyes are piped red... if you can get light back there. 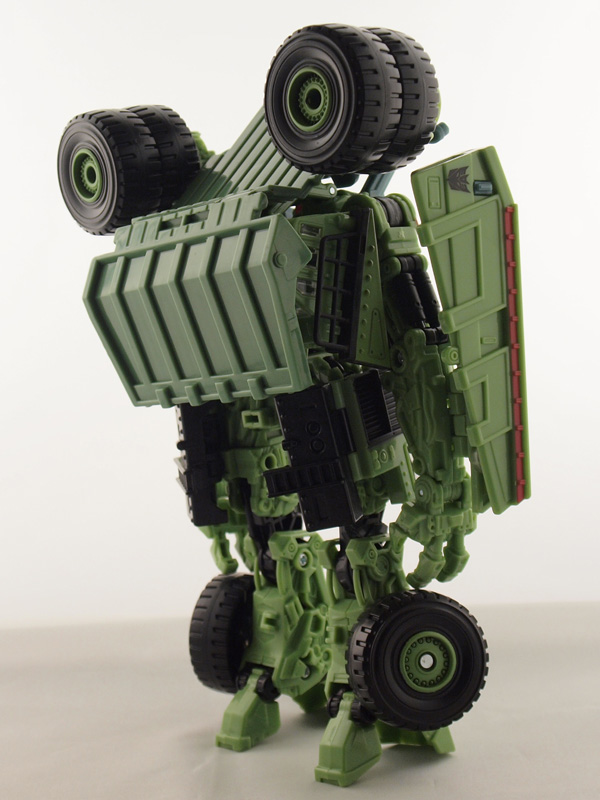 There is a heavy amount of kibble above and behind the head that blocks lights to the piping source. Another head scratcher is the Mech Alive gimmick. The elbows are supported by both a pin hinge and a series of struts. Is this enough to really qualify as Mech Alive? Fortunately, he has another gimmick that's better. Press the buttons on the arm attachment and a pair of clear blades will flip out. They actually look more like hatchets, but they do have some nice detailing. 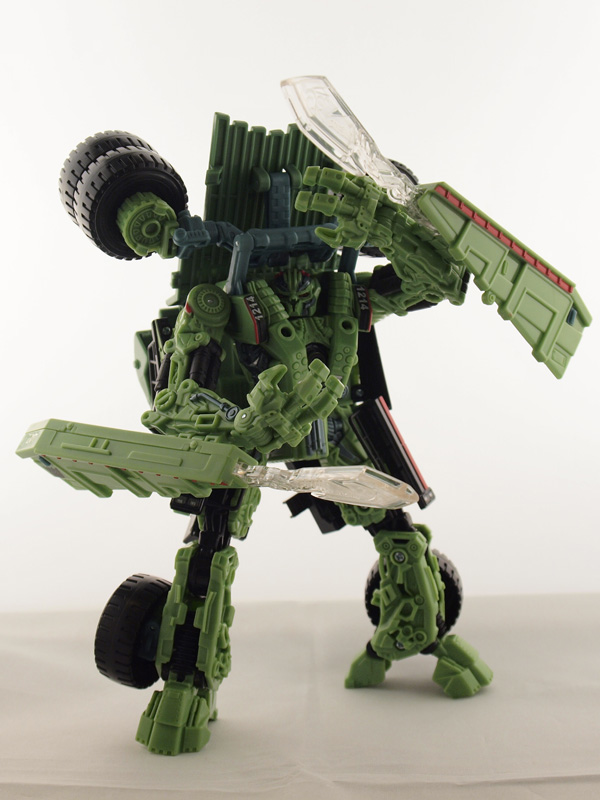 
Kibble is this figure's only real weakness. Too bad, because the joints are set up to do so much more.

Flip the wheel and back assembly over his head so the wheels cover his face. Rotate and press the wheels together so they form the rear axle. Rotate the sword holsters back against his arm, then fold up his hands so they rest on his forearms. Lift the cockpit on his back up 90 degrees. Pop the chest off of the pelvis (held by 2 pegs) and flip the chest assembly up 90 degrees.

Fold together the grille, which is wrapped around his thighs. Collapse the feet into each other, then flip the wheels and half-moon them upward. Fold the knees 180 degress so the lower and upper legs meet. Then, rotate the hips 90 degrees back to force the feet upwards. There are 2 tabs on the lower legs that connect to the waist panel. Rotate the 2 grille halves until they join, then push the grille into the cockpit, connecting the tabs to the legs. Rotate the arms so that the hands face back. Unfold the bed assembly so that the bulkhead rests above the cockpit. Fold the arms into the bed to finish. 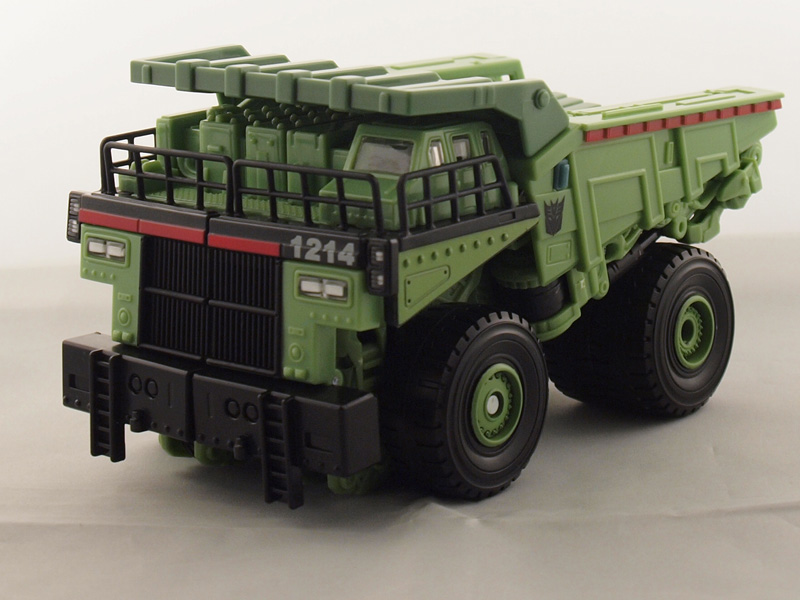 Long Haul is modeled after the Caterpillar 785C mining truck. He retains his green paint, and adds some red pinstriping. You'll also note a small Decepticon emblem on the left side of his bed. The truck is highly detailed, with all the ladders and catwalks intact. 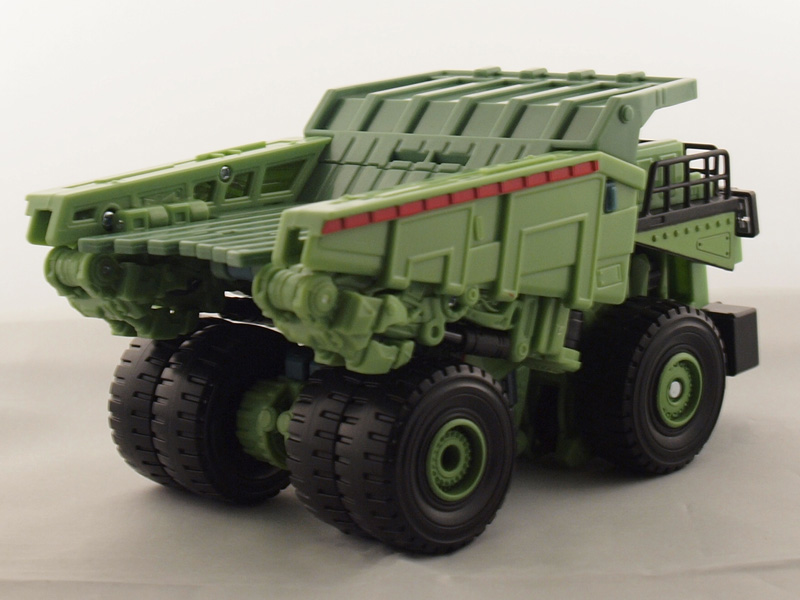 One very nice feature is that the bed can tilt about 30 degrees. It does this using the elbow joints. With the struts attached, it makes the action that much more realistic. You can make out the hands in alt mode... somewhat. It's not a real standout. Perhaps the only complaint in alt mode is that it is extremely close to the ground.

Best robot mode yet out of the Constructicons, minus the kibble
Alt Mode:

A bit low to the ground for such a vehicle, but otherwise tops.
Overall:

This is the Constructicon to get, even if you won't get a "non-combiner"