It seems that, besides the twins, alot of the new characters for the movie got quite the jip when it came to screen time. That couldn't be more true for Jolt, who just got a couple of cameo shots. Fortunately, he has a more prominent role in the Deluxe class lineup.

Jolt loves to cause trouble. more than one group of Decepticons has watched in confusion as Jolt, all alone, raced around them in circles, taunting them. They're not used to Autobots acting crazy. Little do they know that it really is just an act - part of a plan to lure his enemies in close where he can deliver a crippling blow with his electro-whips./p> 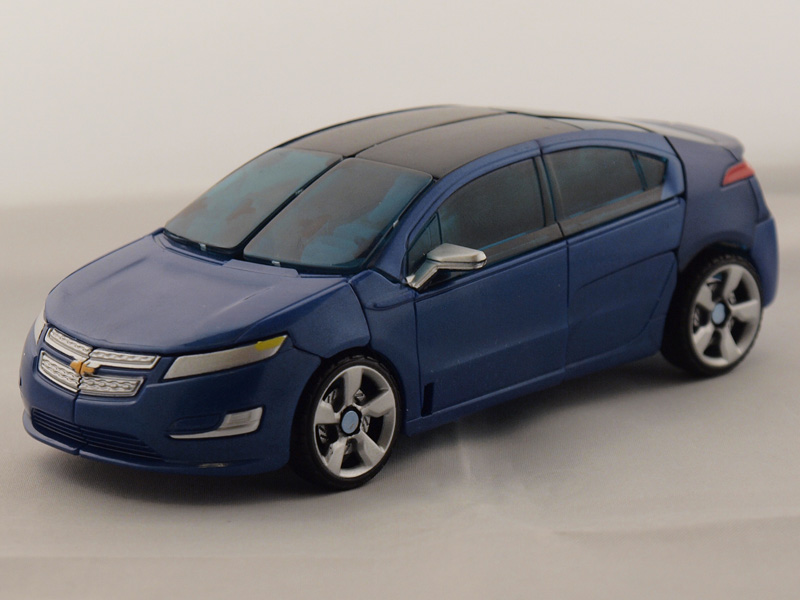 Jolt is based on the upcoming 2011 Chevrolet Volt hybrid. Color is a deep bluish purple. Design wise, it's pretty faithful to the actual vehicle, down to the blackened trunklid and fastback rear. The windows are all translucent blue. 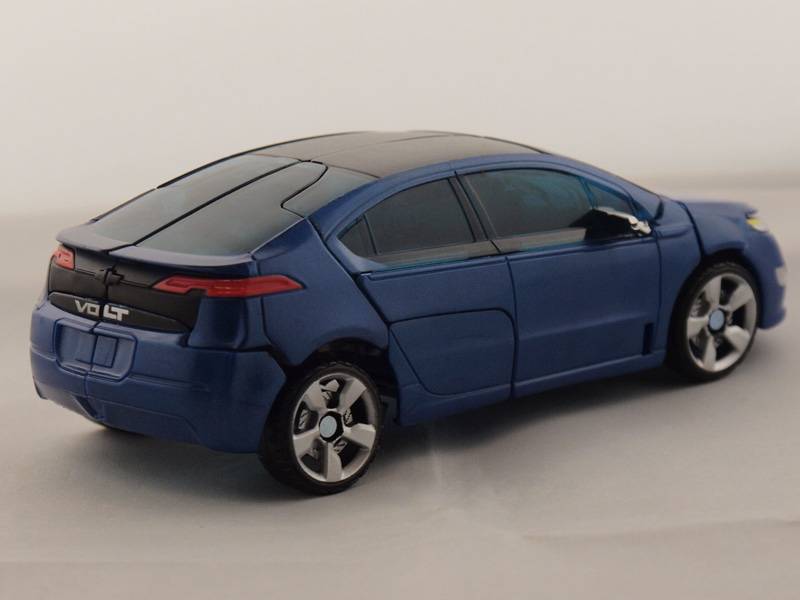 Overall, it's very nicely executed. One curiosity is the rear view mirrors, which are in stark contrast to the rest of the car. The rear glass also draws attention, as it has irregular seams and, in the right light, exposes the gap underneath.

Jolt is surprisingly simple to transform. Split the front grille in half and fold each half away. Flip the hood completely forward. Split the roof in half and swing each half to the sides. Fold the front end down to expose the head fully. Separate the door panels from the roof (if it hasn't done it naturally) and fold them so they drape the sides. Fold down the arms, then flip the windshield panels up. Split the rear end. Grab the rear bumpers and pull them down, positioning them to form the feet. 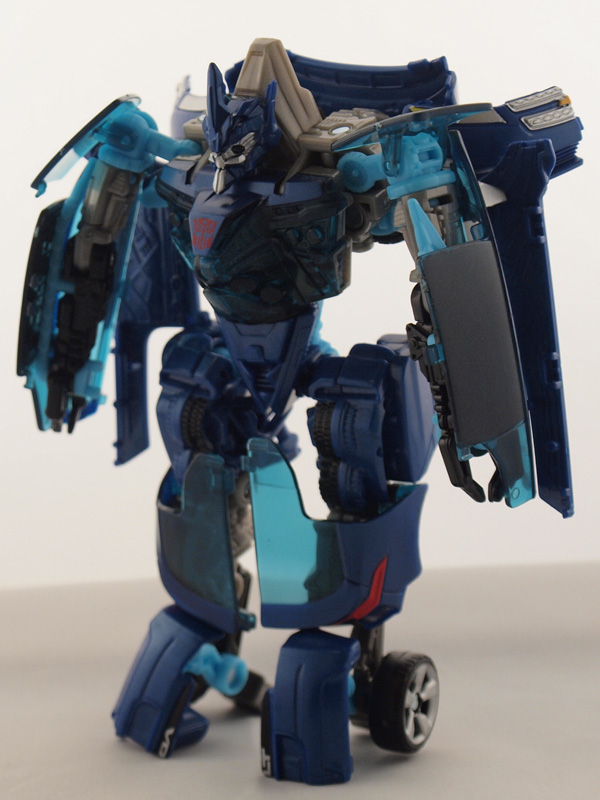 I have to say I'm torn on this guy a bit. The blue-purple motif continues in bot mode, but it also adds a sky blue in the arms. The chest is entirely translucent. The head is a bit of an oddity, having a cutesy feel to it. There is blue piping, but there is a panel directly behind his head that makes the piping almost moot. 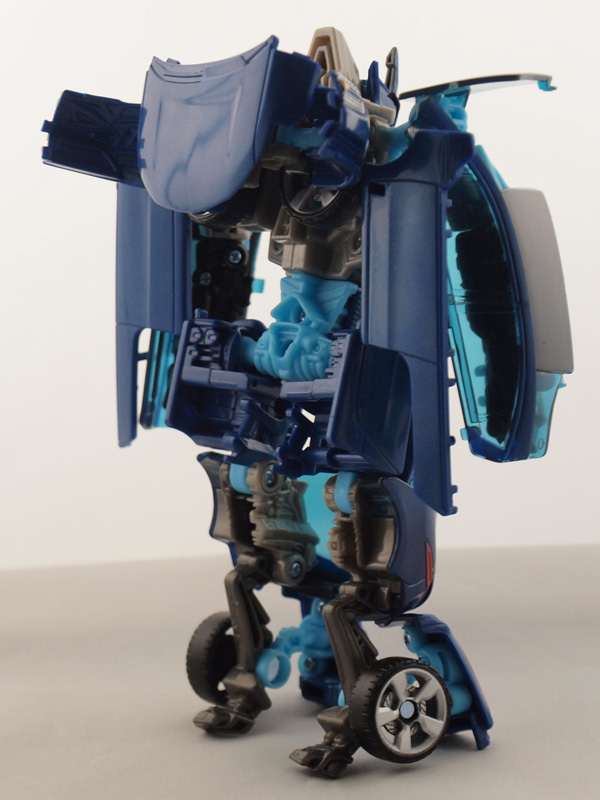 Jolt's weapons are his electro-whips. To expose them, turn a knob on the inside of his forearms. They feel like they should be longer, but due to how they stow away it wouldn't be possible since they're solid plastic. One of the things that bothers me with Jolt are the legs. They almost look like an afterthought. Surprisingly, they're not brick-like, and he can actually pull off some good poses. The arms also seem bricky, but have good hinging as well. What kills the arms is the roof kibble. 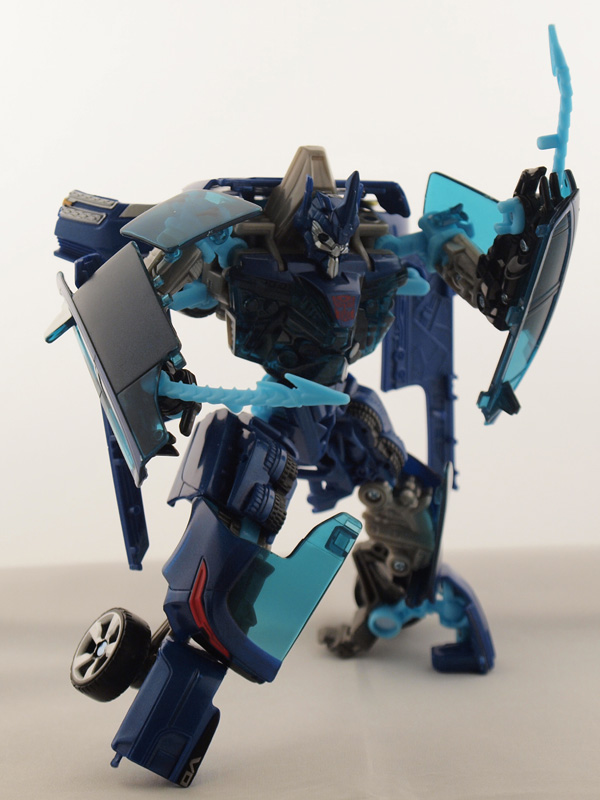 
Due to the panel behind his head, movement is almost nil. Arm kibble will interfere with posing a bit.

Love it or hate it design, looks kibbled but has surprising articulation.
Overall:

He's quirky in robot mode, but surprisingly agile. A nice Deluxe to have.