This week brings us the newest installment of the ongoing Movie-verse serial comic from Titan. Written by none other than Simon Furman with art by John Davis-Hunt, this latest story, New Tricks focuses on a confrontation between Ravage and the ever embattled twins, Mudflap and Skids.

In the great tradition of serialized stories, New Tricks has conveniently delt with the consequences of the last episodes cliffhanger between installments, and has moved on. Putting us roughly back were we were at the beginning of last months comic, with a distrusted, bizzarly non-Ice Cream Truck, Skids and Mudflap desperately trying to get to talk to Optimus Prime, because for some reason no on else in the Autobot chain of command can receive intelligence reports.

The art of New Tricks is easy on the eyes. While not fantastic, it makes the most of the movie designs which frequently leave much to be desired in comicdom.

Simon Furman’s Twins try to be their movie selves but I suspect Mr. Furman’s vocabulary doesn’t stray far enough into the inane to portray them correctly. They banter, but they banter in well spoken English. They don’t seem like Skids and Mudflap, which, ironically is one of the highlights of the story. 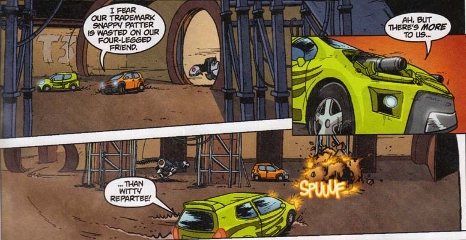 Despite this second threat of investigations and court martials, one half expects the next issue with the Twins helping Ratchet build a base as he says “You ‘bots betray us 13-14 more times… and your out of here!”

Didn’t we just leave this party?