So far, we've had Ramjet (as a Starscream repaint) and Thrust (as a Breakaway repaint) representing the "conehead" squadron. This review will give a look at the final member, Dirge, who has broken away from the pack and gotten his own mold.

Dirge thought the heard of enemy territory - N.E.S.T. headquarters - was the perfect place from which to launch a secret campaign of terror. A single slip-up revealed his presence, and brought his plans crumbling down. Now he's running scared with Bumblebee and Armorhide on his tail. he's too frightened to land, but so terrified of running out of fuel that he finds himself breathing a sigh of relief every time he touches down. 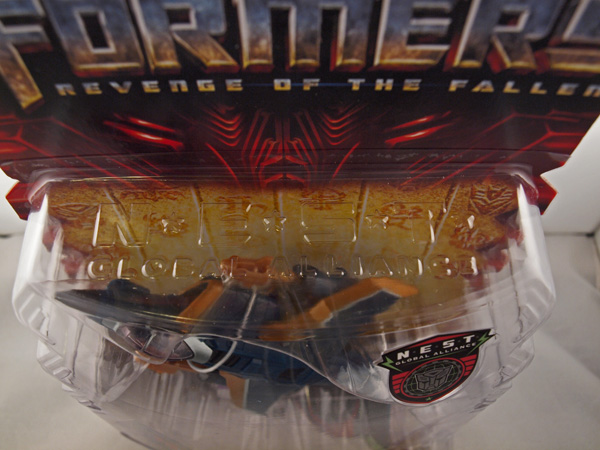 The packaging changes up slighting for this new subline. The NEST Global Alliance shield appears both on the blister wrap up front and on the cardback. In case you needed more reminders, the top of the blister also has "N.E.S.T. Global Alliance" embedded into it. 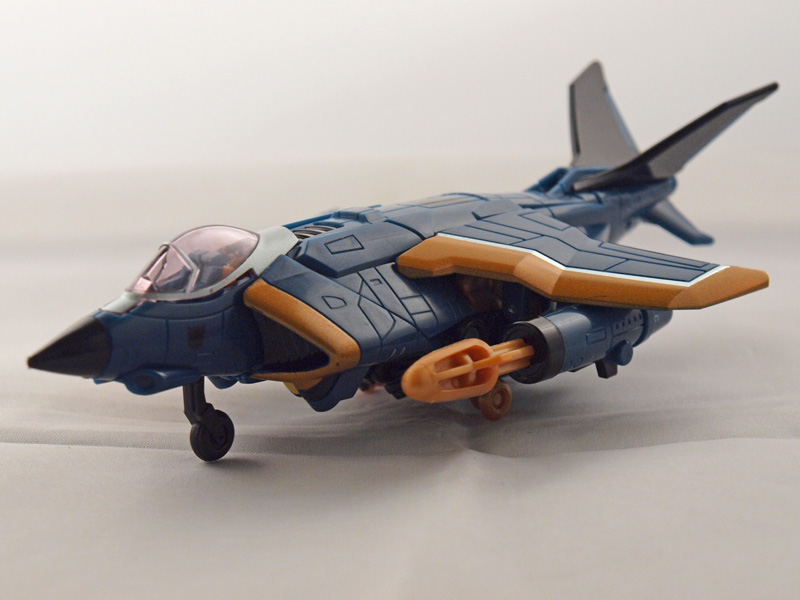 Dirge is a new mold who's alt form resembles a Harrier Jet. He is primarily royal blue with gold flanking the wings and the rather large front intakes. You'll also spot some silver and black. The tail assembly is unique, forming a tall X pattern. You can spy a cockpit seat through the clear cockpit. There's also a Decepticon insignia between the fuselage. 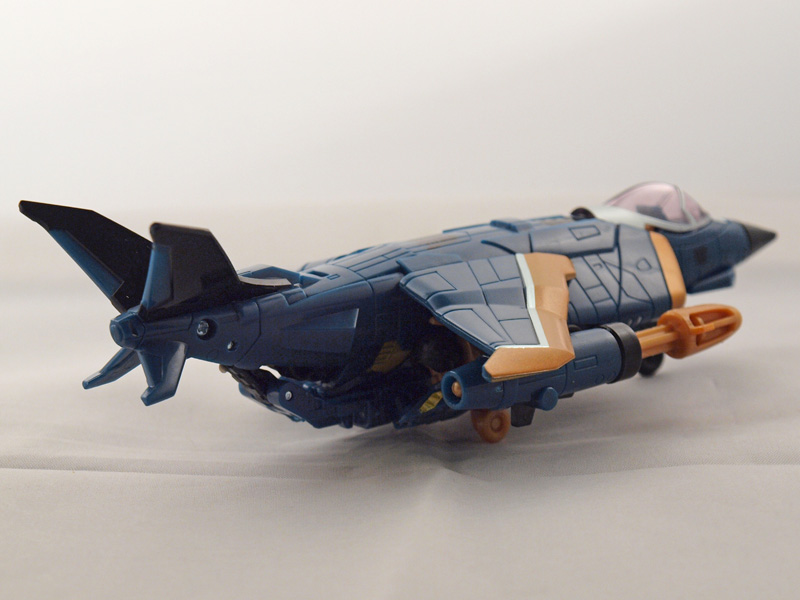 Dirge features a 3pt landing system with fully retractable gear. The nose wheel is molded and folds into the nose, while the rear wheels are on pins and fold against the belly. He also sports a launchable missile on each wing. Overall, a very clean and pleasing design. While it might be slightly cluttered on tbe belly, it tends to blend into the rest of the jet nicely.

For a deluxe, he has a surprisingly complex transformation sequence. Begin by pulling the rear of the wings out slightly, then pull the front intakes outward. Fold the intake/wing assembly downward and join the waist assembly together. Pull on the intakes to separate them from the sides. This will eventually form the feet. Turn the legs so that the gold trim on the thigh faces the front. Fold the wings around in a half moon motion and adjust the feet and wings to position.

Fold up the quarterpanels just in front of the tail assembly. Fold back the false window below and behind the cockpit. Fold down the tail assembly, then fold the leg assembly forward. Rotate the nose and fuselage 90 degrees to the right. Fold back the top of the fuselage, then collapse the panels together. Rotate the arms so the yellow shoulder pads face forward. Push down on the cockpit so that the nose faces up. Lift the cockpit window, swing out the right hand, then close the cockpit. Fold down the left arm. Latch the false window to the chest. Push up on this back to expose the head, then fold the 2 halves of his forehead together. The tail assembly snaps into the back to finish the job. 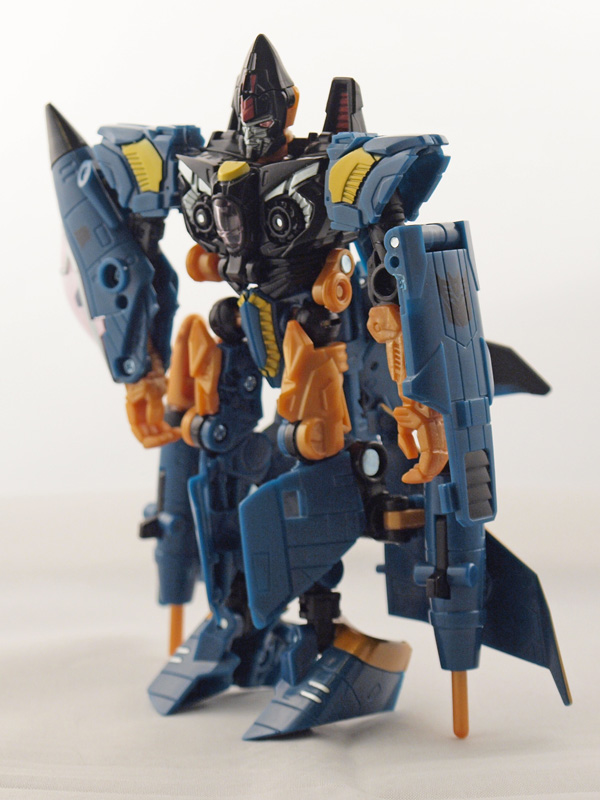 In some ways, this mold reminds me of Sideways from the Cybertron series, particularly in the legs. Dirge retains his blue and gold appearance, with the chest being done almost entirely in black. His beady eyes are piped clear, with a small window behind his head. Therefore, you can have the eyes whichever color you shine into them. 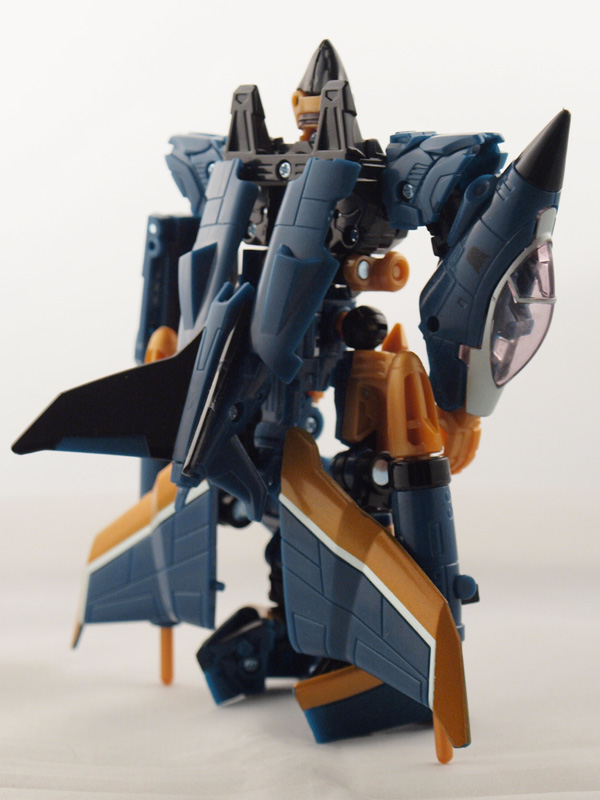 Dirge's missiles can be positioned one of two ways. You can either reattach them to his wings (for hand to hand combat), or you can smartly fit them into the screw holes in either arm, for long range attack. His Mech Alive gimmick is in his chest. As you rotate his shoulders, the thrusters on his chest will spin. It's one of the more decent Mech Alive features as of late. 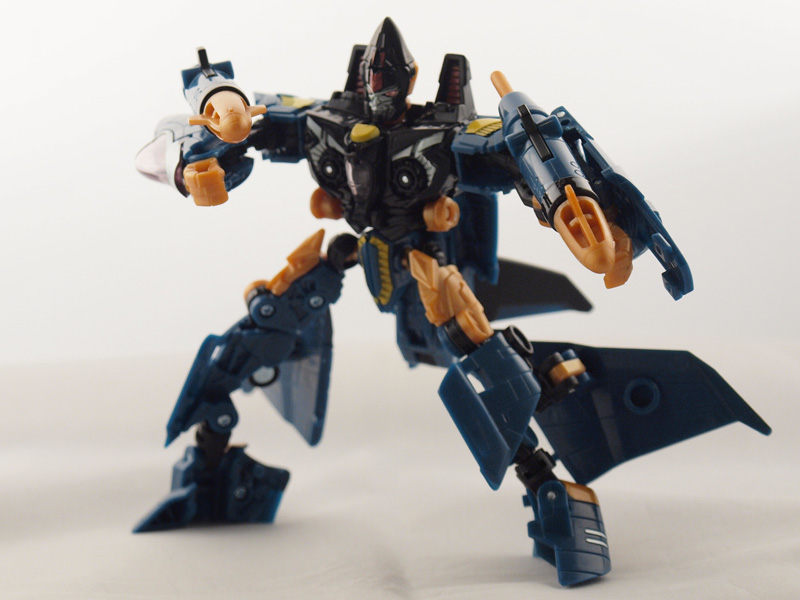 
Articulation is great for the most part. The wings on his legs will need to be moved to take advantage of knee articulation. The only rear sore spot is his stationary head.

Menacing robot mode with only slight hitches in articulation.
Overall:

The NEST subline gets a bang of a start with a stellar original Deluxe figure.