Some people will never be happy with how the Animated figures turned out. However, these same people might be inclined to tell you they liked some of the characters and thought they had 'more potential'. Hasbro must have been listening somewhat, as one of the Animated characters gets re-skinned for the ROTF motif.

Lockdown was hired to hunt down and destroy Autobot Ratchet, and that's what he aims to do. Once he's accepted a contract, nothing short of total deactivation can stop him. His services don't come cheap, but he's the best there is at what he does. Lockdown has never lost a target, and he doesn't intend for this to be the first time. 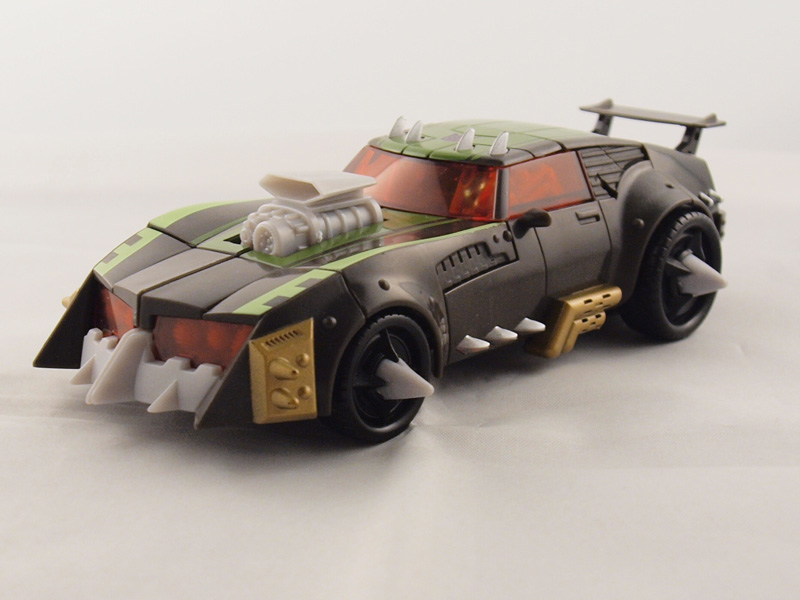 For those who might have thought Lockdown's alt mode would remain relatively unchanged from the TFA version, you'd be surprised. Besides the basic feel and color scheme, the 2 alt modes are worlds apart. For one, ROTF Lockdown sports alot more green, flowing over the hood and onto the roof panels... in 2 shades even. The ROTF version is slightly longer in length, slightly shorter in height and noticeably thinner in track width, purveying a slimmer look. 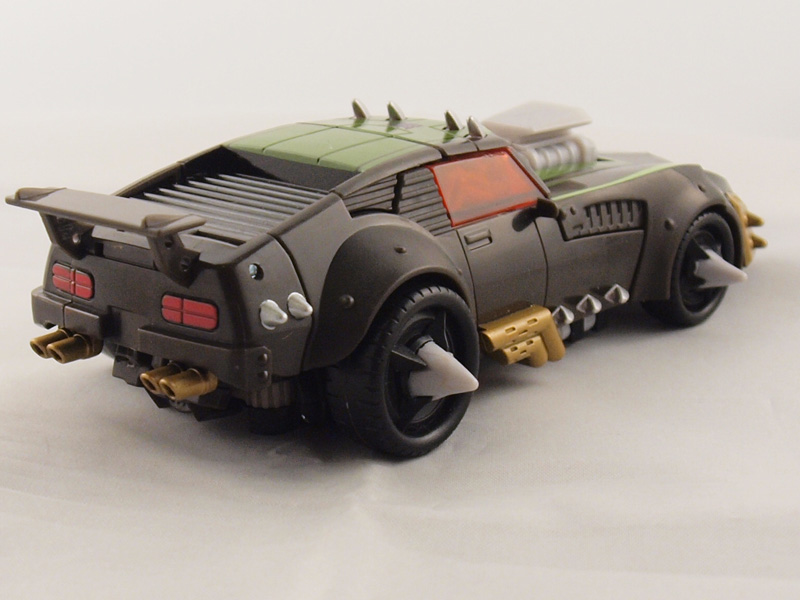 Whereas the Animated version had a molded decklid spoiler, the ROTF version sports an aero type. The spikes on the roof of the ROTF version are jagged, like teeth, as opposed to the studded type on the Animated version. In addition, you'll find spikes on the lower fenders. You'll also find a pair of dual tailpipes jutting from the rear bumper. Even the spikes on the wheels are different, being made of soft rubber protruding quite a ways from the rim. The only downside might be the engine blower, which looks puny on comparison to the TFA version 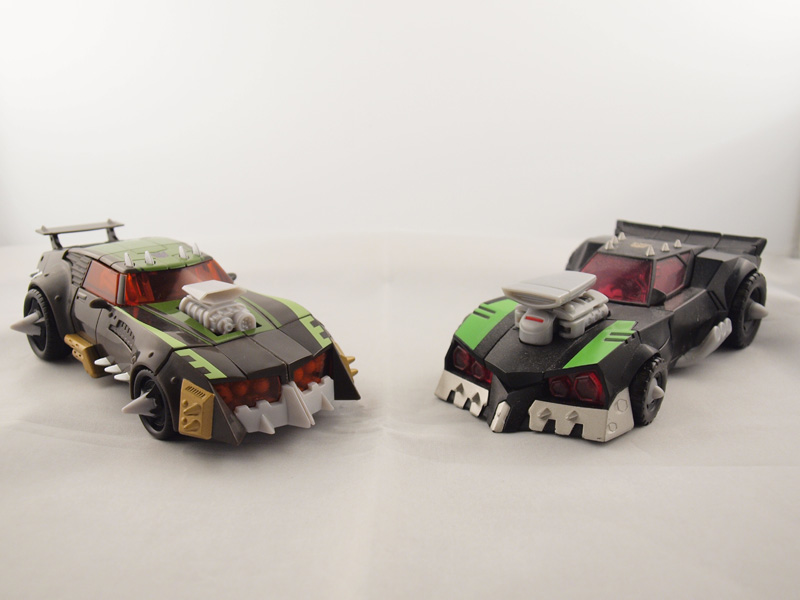 Transformation is completely different from the TFA mold. Start by rotating the hook under the belly outward. Remove the engine blower from the hood. Fold both rear wheels down. Peel both doors and quarterpanels away from the body, taking care to do it slowly as the ball joints aren't the best. Fold the rear fascia up. Grab the front end and rotate half-moon a full 180 degrees. Separate the legs. Pull out the headlights, then bend forward to form the feet.

Hinge the knees to form (sigh) the chicken joints. Fold both wheels against the hips. Pull both arms up (carefully) so the shoulders set. Bend the head down, then cantilever the roof so it forms his chest. The roof clamps down on a recess below his neck. Position both arms so they stand at his side. The quarterpanel on his left shoulder folds over the joint. The engine blower mounts on his left forearm. Position the head to finish. 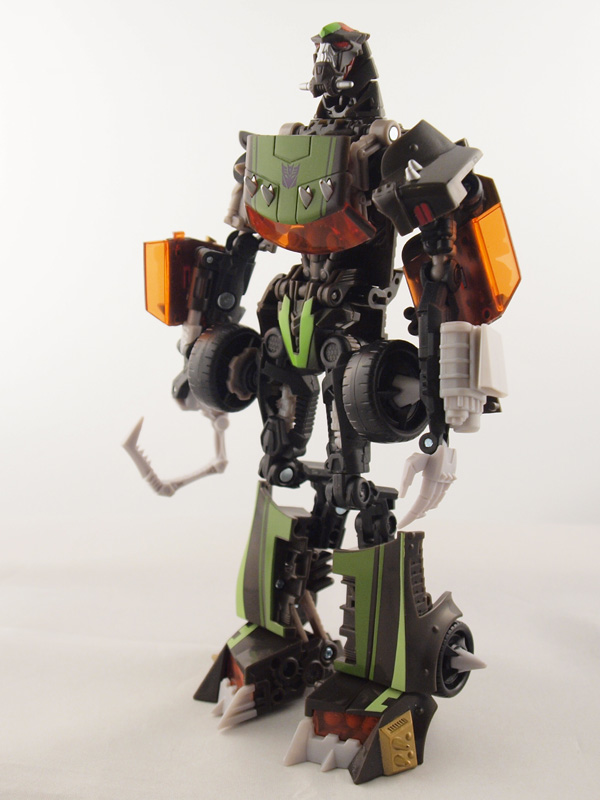 Again, with the robot mode, the two share nothing besides their basic structure. Whereas the Animated figure looks more polished, the ROTF figure captures more of a real life look. The head sculpt is particularly well done, complete with Frankenstein-like studs on the chin. The eyes are piped in red for added effect. Not sure if the Hasbro designers have a fetish for chickens or note, but the double-jointed knees are here. They're fortunately subdued by the hood panels. 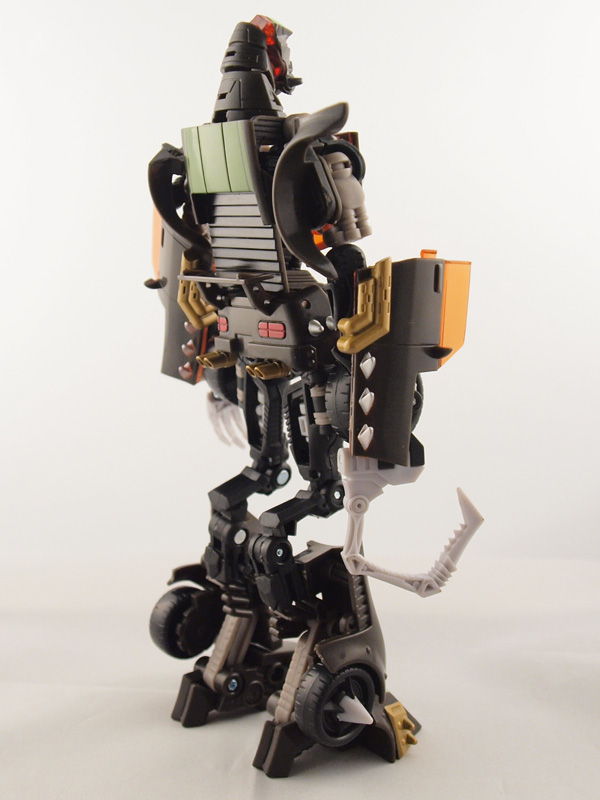 Although there's no Mech Alive gimmick advertised, there are a couple of places where it could be found. The thighs are open ended, so rotating the lower legs shows a sort of 'spinning gears' effect. Also, the hook on his right arm is attached to a strut which moves as you fold the hook back. The left hand, by the way, is soft rubber for full (albeit temporary) flexibility. This brings me to perhaps my biggest disappointment: the arms. The ball joints on the elbows and shoulders pop off way too easy for my liking. Combined with the door kibble on his arms, and poseability comes up short. 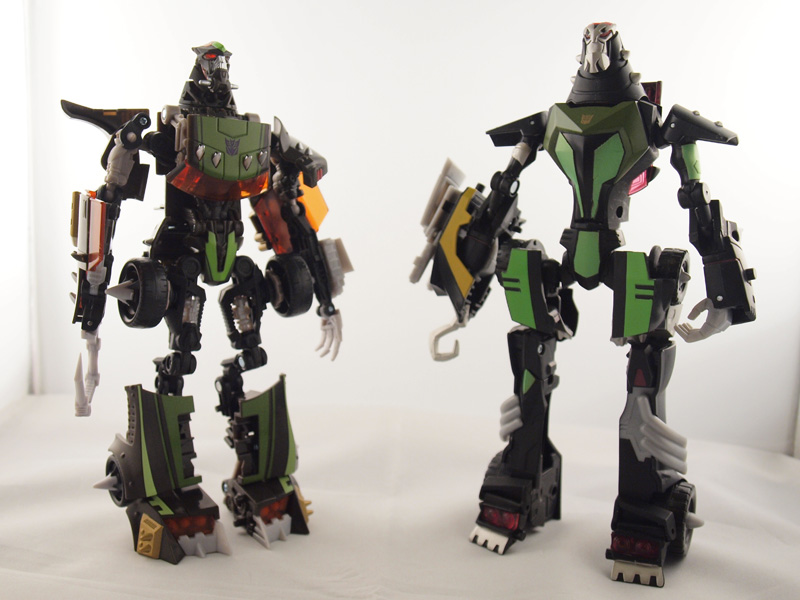 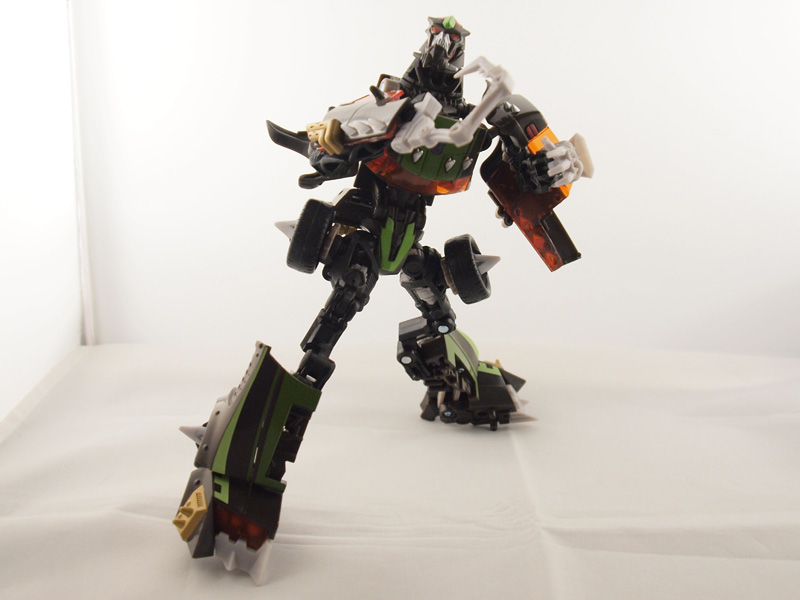 
The hips come up short in posing due to design. The arms are very fragile due to the ball joint design but do hold poses once intact.

Vehicle mode gets a major update that comes off sharp
Robot Mode:

The translation to ROTF is flawless... too bad about the arms.