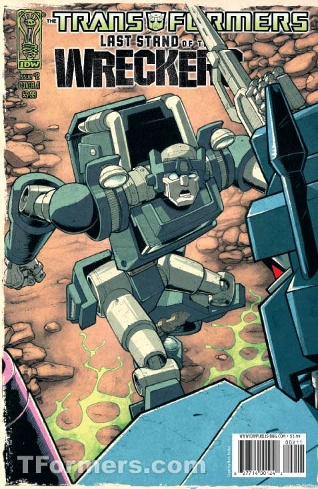 Another excellent installment of Last Stand of the Wreckers this week. More set up and exposition this round but no lack of action. With each issue we get more insight into the newer cast members and further development of the more familiars ones. Nick Roche and James Roberts continues to prove that Transformers comics can be excellent, and consistent.

Character development, and story set up are still paramount in this second act of the series, we gain insights into the pasts of Impactor, Overlord, and the Wreckers as a team. The establishment of the new Wrecker team members is particularly well executed. This, even more so than the fantastic action, is what makes this a Wreckers book.

Taking underused characters, bringing them to the forefront and making them worth reading has always been the genius of Wreckers books. Roche and Roberts do it so well here I find my self more interested in Ironfist, Guzzle, Rotorstorm and Pyro, than in the top shelf casts of the other current Transformer comics.

Included with all this characterization is a ton of exposition. The info is embedded and easy to digest a tough feat. Despite the deluge of discussion, there is still room for 2 large cast battles one even slightly gratuitous Overlord smack down.

Verity remains blissfully un-annoying in this issue and her robotic extremities are explained as parts of her (pretty cool) exo-suit. Her involvement ramps up a little and hence her capacity to be “the annoying human” increase. What her role will be remains to be seen. We live and hope.

Nick Roche’s art continues to be the most consistent and pleasing of the modern Transformer era. It has a fun and familiar tone and a persistence of vision that sets it apart from his style hopping, redesign happy contemporaries. That being said, the inking by John Wycaugh is a little over zealous.

Wreckers is wrapping up its introductory phase, judging by this issues close, we’re probably in for non-stop action for the rest of the series. These first two issues have been used well. We know what’s going on, who everyone is, and why we should care about the conflagration that is about to occur. 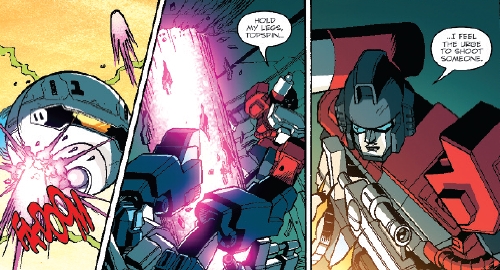 This series is shaping up to be fantastic, the quality is constant on all levels. The story has punch, the dialog is impeccable, the art is fun and inviting, even the outward continuity is well above IDW’s standard. This series carries none of the “Its not a reboot!” baggage of the other Transformers books.

If you buy one comic this week, buy Last Stand of the Wreckers #2. If you buy two, get the other cover.

(If you missed the sold out Issue #1 there was a reissue on Feb 10th.)