Remember when the details for Revenge of the Fallen started leaking out and Devastator was confirmed? There certainly was a lot of buzz about having a gestalt in the movie. However, when the Supreme class figure hit the shelves last year, a lot of that buzz turned into grunts. Around the same time, news got out that a smaller version would be released that might remedy some of the angst. Well, Walmarts everywhere are starting to stock the Legends class version of the mighty Decepticon warrior.

Never before has a robot so powerful been seen anywhere in the galaxy. Indeed, few forces on Earth can match the strength and fury of Constructicon Devastator. He is the equal of Earth's most powerful storms - a ferocious destroyer of all in his path. He is so huge that the very thought of engaging in direct combat against him makes even the stoutest Autobot quake in fear. No one knows how to defeat him, but if the Autobots hope for victory, they will need to find a way.


Devastator comes in a clear package already assembled in his combiner form. Before we get to the big lug, let's look at his individual components. 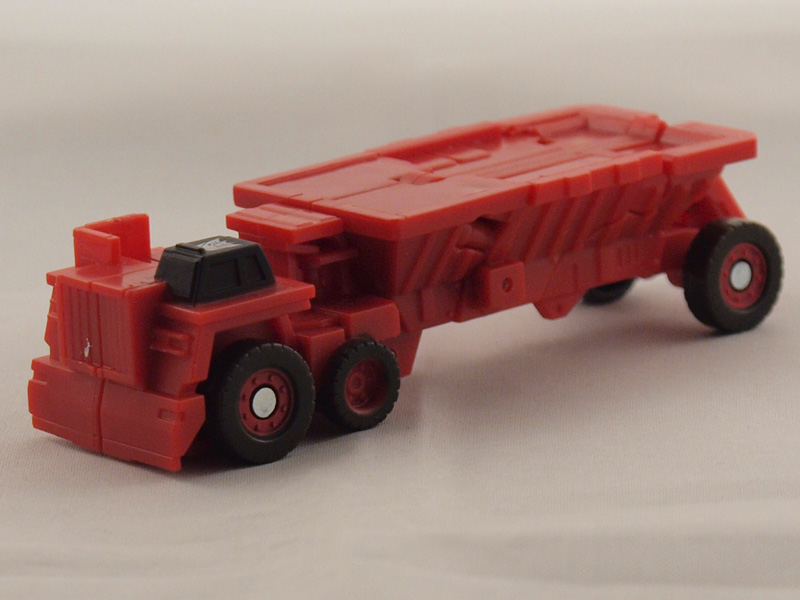 Overload forms the waist section of Devastator. His alt form is a red longbed dump truck. He features 6 wheels (the 2 wheels behind the front are pinned stationary) and a decent amount of detailing for a Legend. Transformation from alt to robot mode is simple. 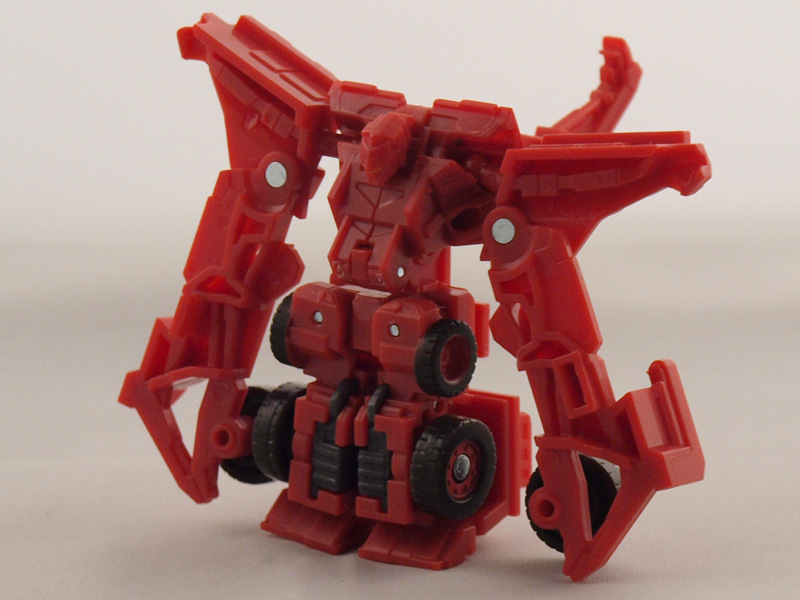 His robot mode comes off looking a bit stocky. In fact, his arms almost lift him off the ground. The shoulders are the only true point of articulation unless you enjoy your figures doing the splits. Still, he's not terribly bad looking. Some paint detail might bring out his finer points. 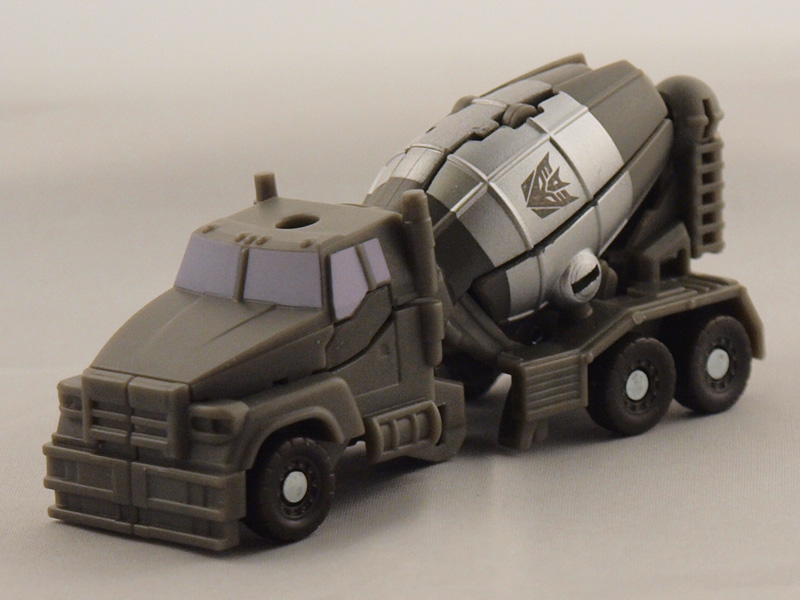 Mixmaster was one of the Constructicons blessed with a larger (Voyager) scale fixture. The Legends class figure features good detailing of the Mack cement mixer, right down to all 6 wheels being freely rotating. Transformation is fairly simple into robot mode. 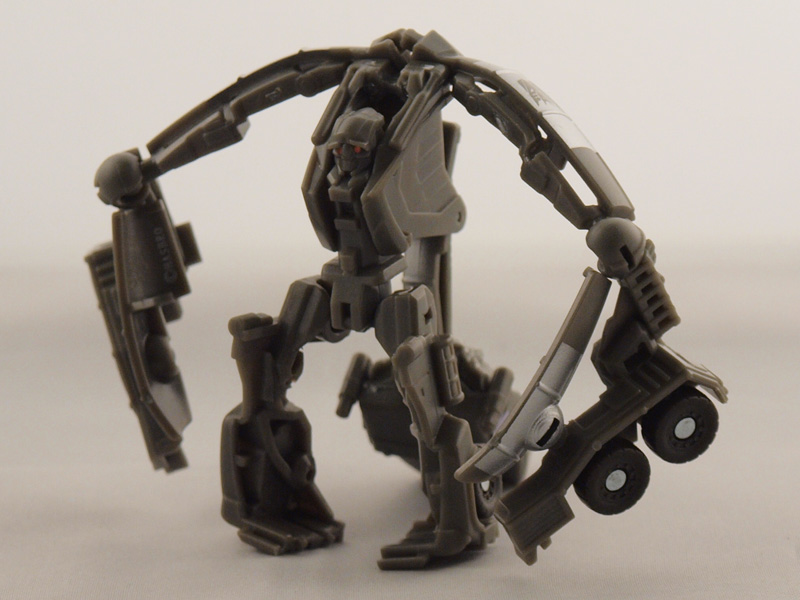 Mixie didn't translate too well in robot mode when being downsized. The legs look awkward and the arms are a bit far out from his body. To pour salt on the wound, Dev's head drags behind him like an abused backpack. On the bright side, his hips and shoulders are ball jointed for some articulation. 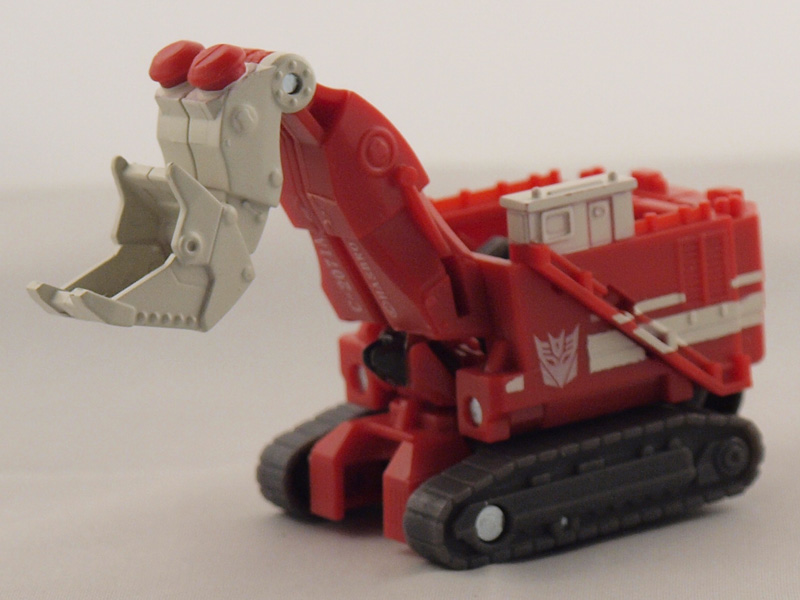 Next up is another downsized Voyager figure. The detailing is fairly decent, but I hope you don't mind the missing roof. The shovel is pinned at the apex for bending, but the base is molded. There are 2 molded wheels towards the front of the tread, as well as one big wheel recessed in the rear. Transformation isn't overly difficult. Just remember to slide his wheels to the center. 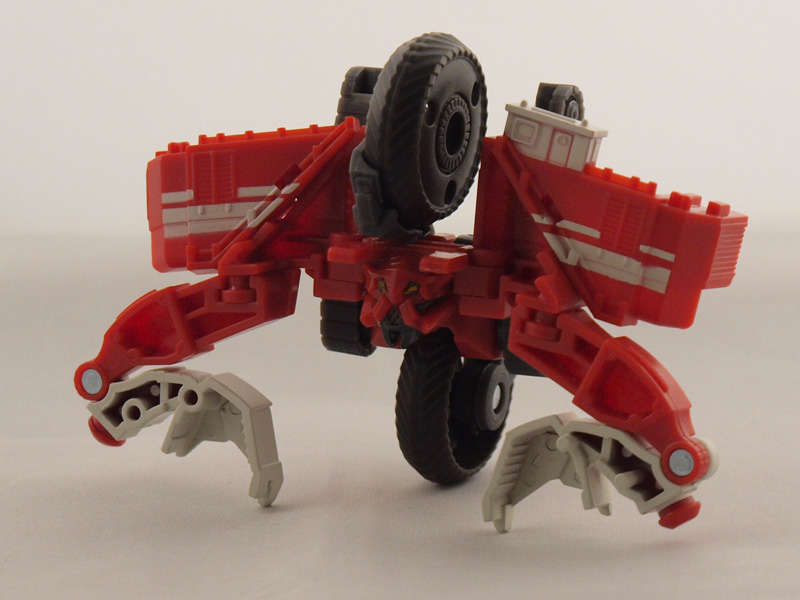 Unfortunately, Demolishor still looks as goofy here as he did when he was a Voyager. In fact, he's probably the most faithful translation to the smaller scale. That's not saying much. For benefits, both wheels spin freely and both shoulders can flex inward. 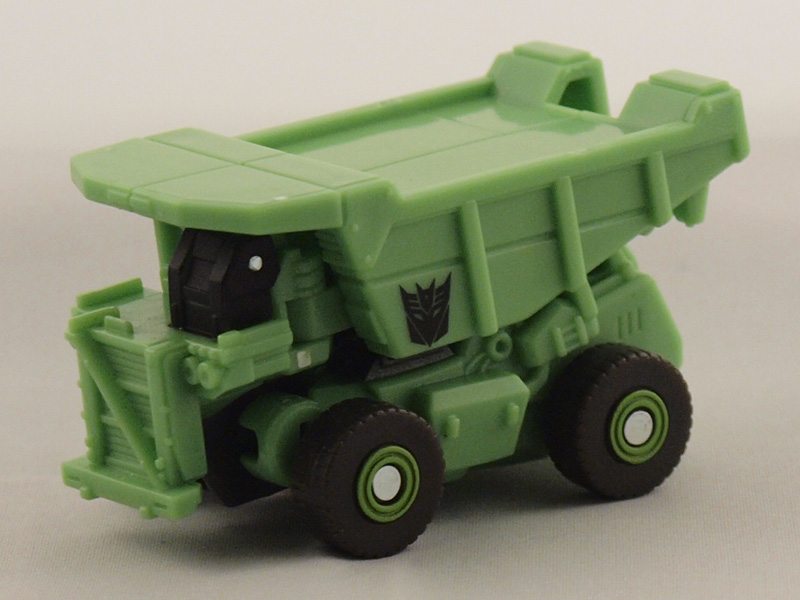 Next up is the final figure to get the Voyager treatment. Like the others, the detailing on alt mode is surprisingly good. Due to the transformation, the dump bed is not tiltable. Transformation into robot mode is easy. Just don't forget to flip out his feet. 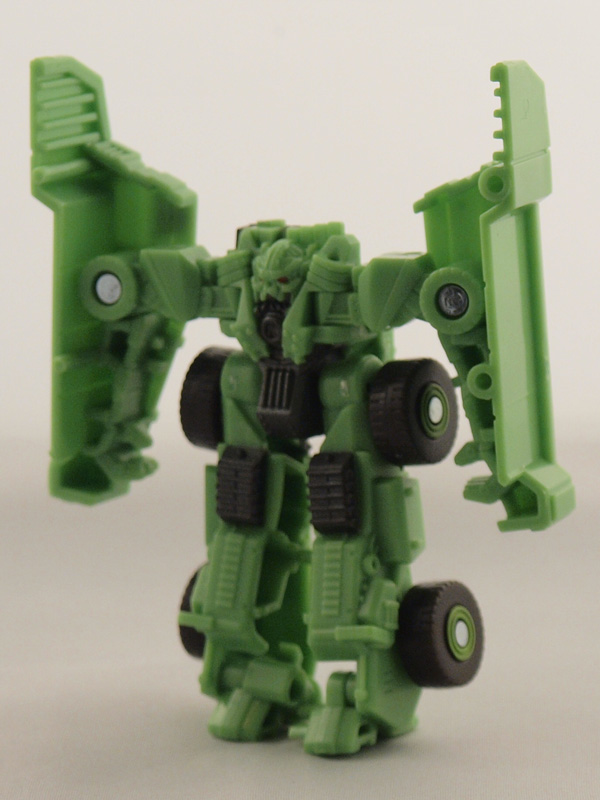 Long Haul had a strong looking robot mode as a Voyager, and that trend continues for the Legends mold. Hips are ball jointed and the shoulders are pinned for spread and inward flex. All in all, my personal favorite. 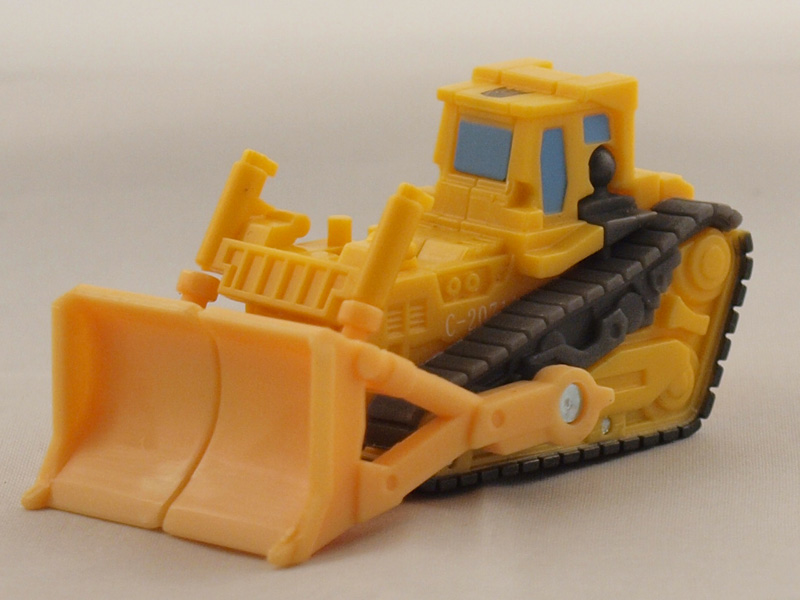 Rampage was the last of the Cons to have an upsizing originally. The mold translated fairly well into a Legends mold, although you loose the tillers in the rear. No scooper action, as the front plate interferes with the otherwise good range there could have been. You will, however, find 4 molded wheels built into the tread. Rampage's transformation can be a bit awkward, as the ball joints on his shoulders pop out fairly easy. The legs can also be a bit of a workout to situate right. 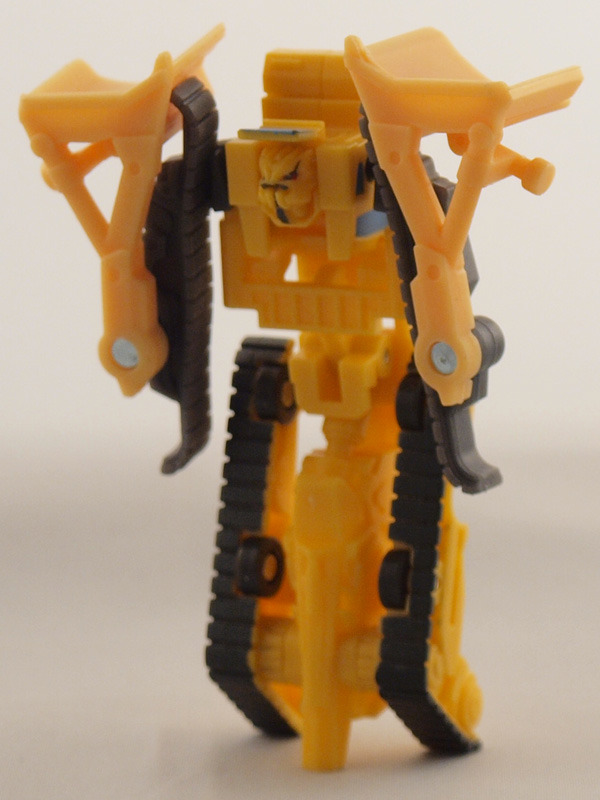 Out of the 4 original Constructicons, Rampage translated the worst in robot mode. The legs are ridiculously long and just look out of place. The only usable articulation is in the shoulders, which are ball jointed. Good luck keeping the ball joint in the socket, though. 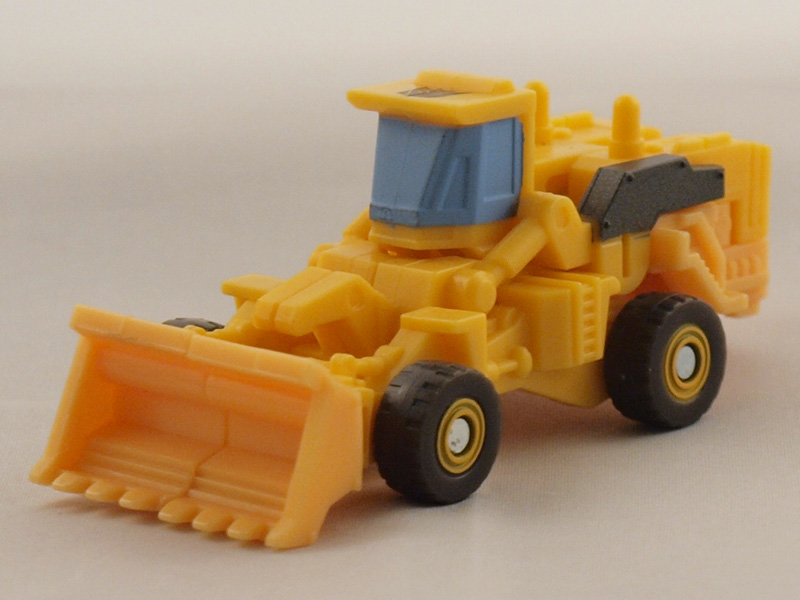 Next on our list is Scrapper. As in his G1 days, Scrapper is a front end loader. Although the scoop doesn't lift up, you can angle the scoop slightly. As with the others, I am impressed with the level of molded detailing in the alt modes. Transformation is curious yet simple. 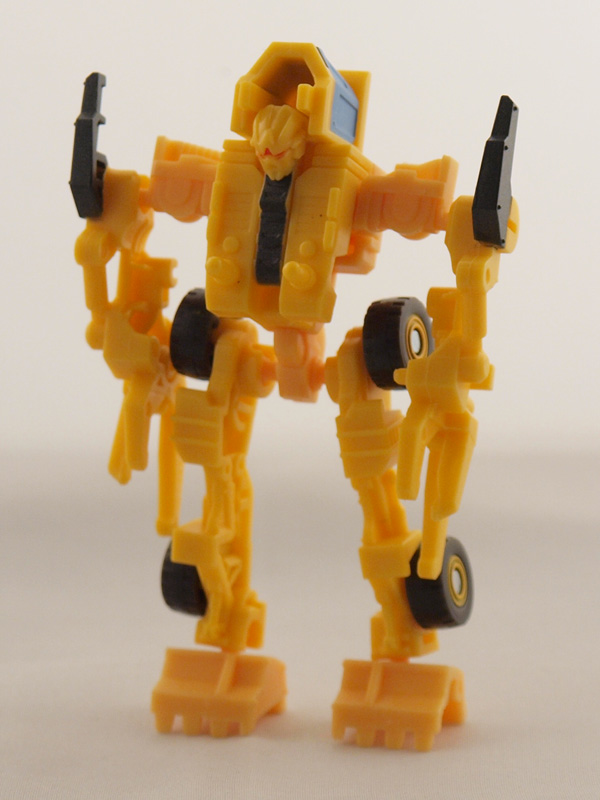 Scrapper's robot mode is on the same level of greatness as Long Haul. Articulation is also the best out of the bunch, featuring ball jointed hips and shoulders. He even has some flexibility in his feet. Seeing this figure makes me sad and a bit disgusted that Hasbro didn't consider him for a larger class mold. He could have been stellar. 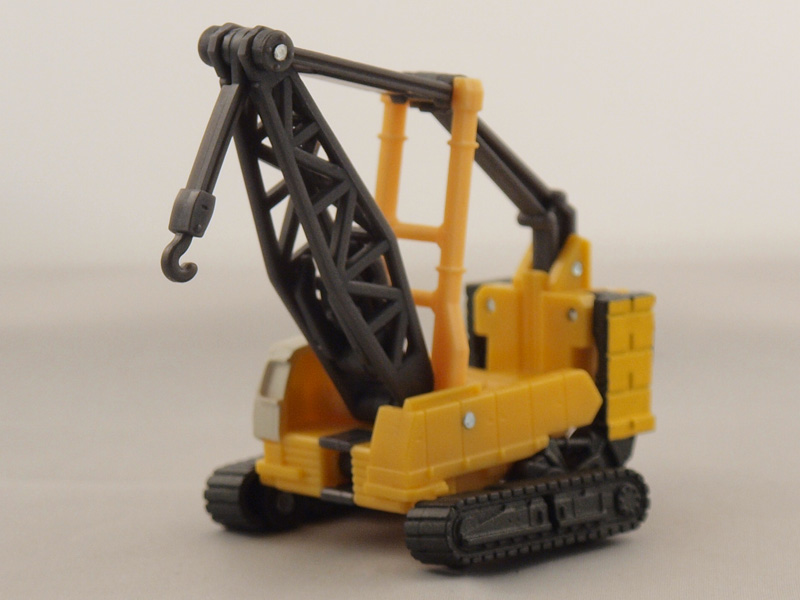 The last member is Hightower, a heavy duty crane. Hightower has 2 cranes to choose from, either a simple hook or a larger claw. The claw has a pin for hinging ability, as well as an extended reach. The treads feature 4 molded wheels underneath. Hightower is a candidate for the funnest transformation to robot mode. 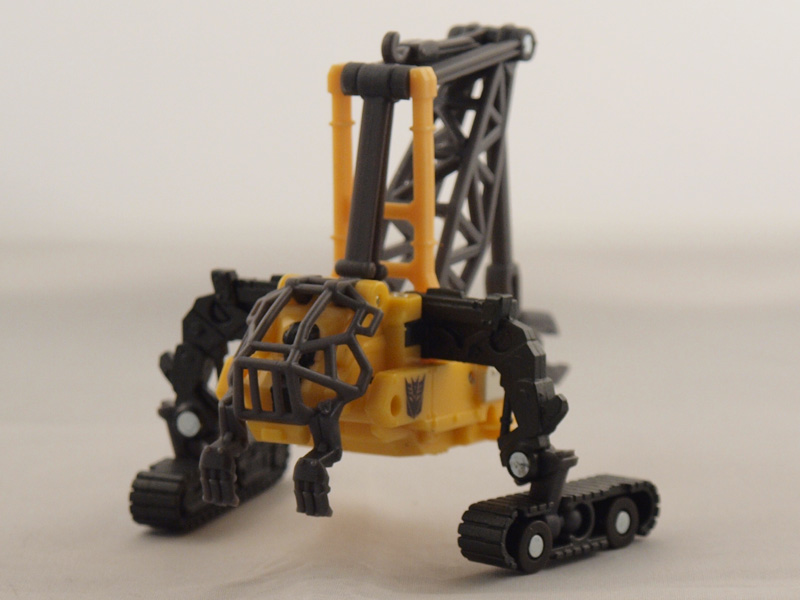 Well, not so much a robot mode as a beast mode. Perhaps he's a cousin to Skorponok. At any rate, a fun looking critter complete with a barred mask and a clawed tail. He definitely scores points for uniqueness.

To transform into Devastator, have all figures in alt form. Start with Long Haul. Transform his as if he was converting to robot mode. However, don't separate the dump bed. Instead, flip up the grille and rest the bed against it. make sure the peg on the rear end faces up. Long Haul forms the right leg.

For Rampage, separate the front scoop and pull out the tread assembly until the front hydraulic panel rests against the cockpit. Once you have the treads positioned right, you've formed the left leg.

On to Overload. Split the front end completely in half. This houses the 2 sockets to join up the legs. Pull down the rear end halves until they touch the front assembly. Fold up the tail and connect the legs, making sure the 'tail' faces the back. You now have the waist assembly.

Next, we focus on Demolishor. Take the rear wheel and pull it forward. Rotate the front treads so they line up diagonally to the big wheel. Transform the arms as you would to form the robot mode, tucking in the shovels completely to expose the shoulder sockets. The treads slide into the grooves on the rear end of Overload. Thus, Demolishor now serves as the backbone.

Scrapper is a cake walk. Simply separate his scoop, rotate it 180 degrees, then push it back in. Pop him into the right shoulder socket and you have a right arm.

For Hightower, remove the brace from the crane neck. Tuck in the hook (or claw, whichever is exposed) and pull out the head assembly, arranging it to look like a claw hand. Reconnect the brace to the lower bar of the crane neck and connect to the remaining socket to form the left arm.

Last but not least is Mixmaster. Split the cab in half, allowing for Devastator's head to flip over completely to the rear end. You will see 2 slots on Mixmaster's rear wheel assembly that will slide in to 2 tabs right above Demolishor's robot head. Position the front end halves to 'grip' around the back end. You've now formed Devastator! 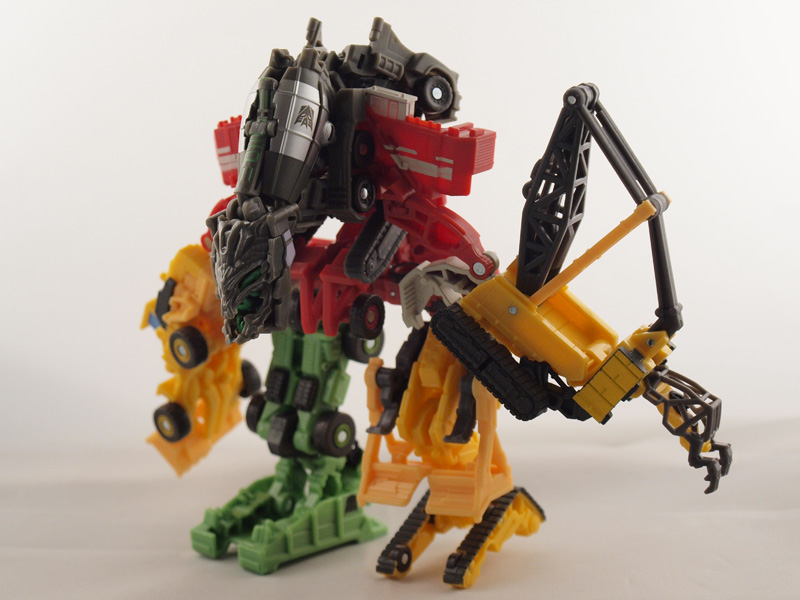 For anyone that thought there might be some added articulation to the Legends Devastator, let me stop you in your tracks. There really isn't any. Besides the limbs being able to spin on the socket point, Dev is about as stiff as a brick can get. However, he does stand rather nicely. In relation to size, the individual robot mode are all about the same height-wise, therefore not entirely accurate. In full Devastator mode, he stands about twice as high as other Legends figures. Translation: Not accurate at all.

Some might look and gasp that Walmart wants $32.00 for this combiner set. However, you have to stop and think for a moment. A standard Legends class figure will set you back $5. You get 7 such Legends figures in the set. OK, so two of them are pretty mediocre, but on the flip side 2 of them are excellent. The other three are average for their size class. The true bonus is this. Not only do you get Devastator for only $32, but you also get individual vehicles that, unlike the Supreme class figure, also have individual robot modes. Not too shabby, if you ask me.

MSRP:$32, sold only at Walmart