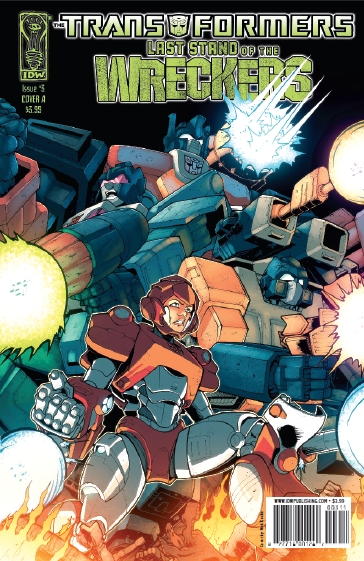 It’s worrisome that any comic this good has “Last” in the title.

Last Stand of the Wreckers #3 accomplishes the seemingly insurmountable task of exceeding it’s predecessors in it’s over all awesomeness.

After a brief though compelling expository opening, this book gets straight to the aft kicking. The cinematic story sweeps you from one pitched battle to the next, but never leaves you wondering where you are. The flow is natural and well paced despite being full of exploding heads and Wreckers rowdiness.

Roche and Robert’s dialog is with out doubt the best the Transformer comic franchise has read in a long time. It’s believable, evocative of character, and organic, while still being funny, in-joke ready and clever.

This comic is mostly battle and escape, the story itself doesn’t move forward much, but the character development never stops. These G2 Import nobodies are becoming some of my favorite characters. No named characters are mere back ground color, every one has a purpose and a drive with in the story.

If you never had these characters as toys, beware, Last Stand reading has been linked with E-bay shopping sprees. (Anyone selling an Overlord or Pyro?)

The feeling of continuity is a strong point in Wreckers. References to what has come before and how it effects the present are numerous and palpable. This is the level of canonical unity fans have been asking for.

Art duties this month were divided by Nick Roche and Guido Guidi. Always a pleasure to see Mr. Guidi’s name on a good book, his and Mr. Roche’s style gel beautifully. The action is amazing and, as usual, Roche can cram more story and meaning into a frame than most can squeeze out of a trade.

If you’re not already reading Last Stand of the Wreckers you must not like comics, the Transformers, or both. Which would beg the question, why are you reading this? It’s possible you may be waiting on the trade, to you I say: Don’t Wait! Vote with your dollar, buy the trade later! Led IDW know we appreciate quality! Besides who want’s to wait for something this good? Though there is no doubt this will be a great trade paperback, it’s fantastic episodic reading as well. Finally, a monthly it’s worth getting every month. (I myself have been buying gratuitous copies at my local comic shop in addition to my review copies, to support the book.)

Put simply, Last Stand of the Wreckers is the new apex of Transformers fiction, and one of the, if not the, best comic on the shelves at present.