When it comes to the main characters of the movie, there's certainly no shortage of figures to collect. They seem to always get at least one repaint, if not more. This falls true for Starscream, who picks up a Nebular repaint. K-Mart is the only place to find this figure. Hopefully, this review will settle your mind as to whether to hunt him down.

On Cybertron, tattoos are more than mere decoration. They can be packed with super conductive materials and symbiotic nano-machines to enhance a robot's sensors and strengthen his weapons. Starscream designed his tattoos to help him locate the fragments of all spark, as well as extend his range and power in the air. When his new sensor net detect any ancient artifact from Cybertron, they glow softly, charging his weapons and boosting his engine output. 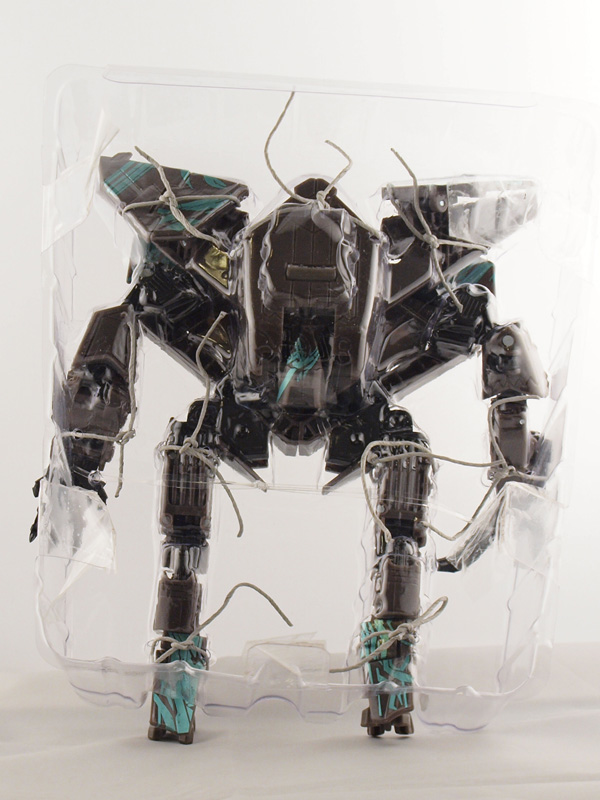 Now you may be asking, "Why is he showing a pic of the tie downs?" Look closely. The tie material is actually cloth instead of nylon. Was this the big packaging change that Hasbro spoke of during BotCon 2009? Are they perhaps being more eco-conscious of the packaging they use? Or is it just a fluke? Only the future knows for sure. 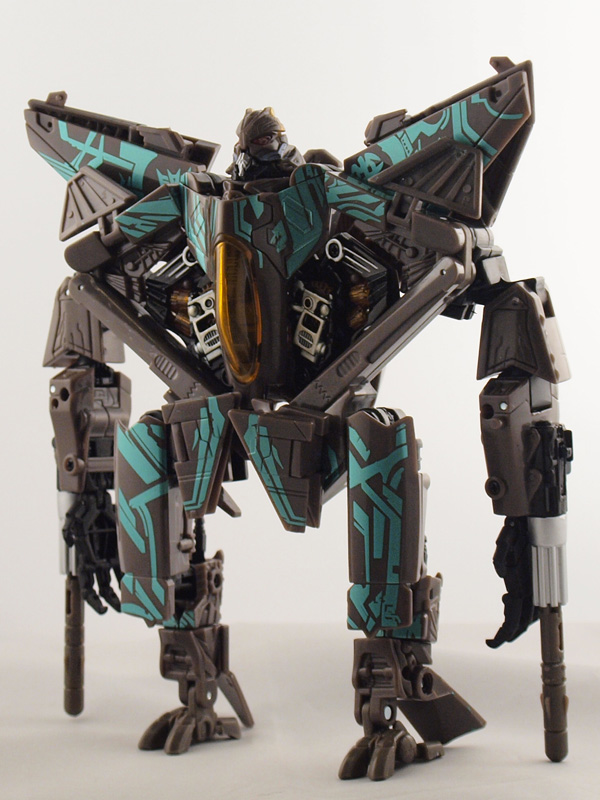 Originally, I passed up the 2009 Starscream thinking it was just another release of the 2007 mold. Oops. Therefore, I'm reviewing this figure for the first time. In this guise, he is a light bronze color with bright green 'tattoo' accents abound. The chest area also features silver and translucent amber. The eyes looked like they're piped for amber lighting but for some strange reason they're not piped at all. 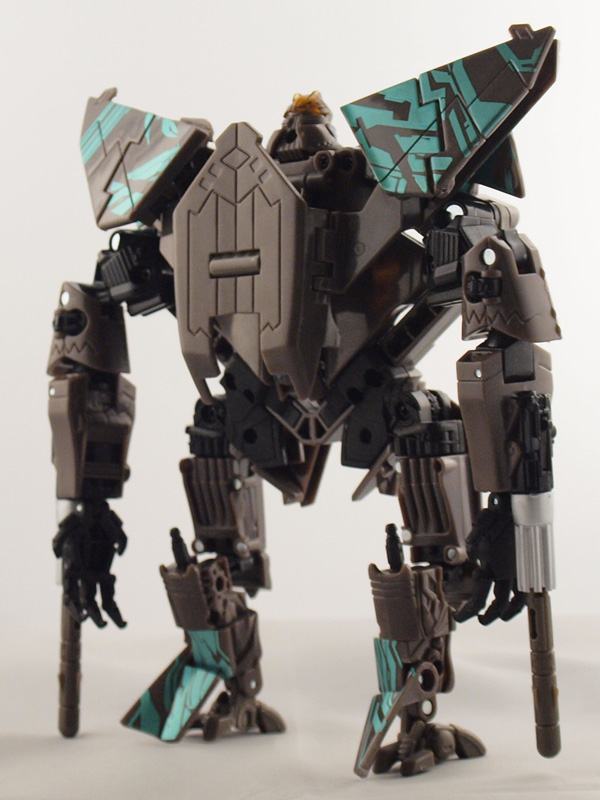 The Mech Alive feature involves his chest. Turning his head will activate gears within his chest. This is assuming, of course, that the black gears within his back are properly aligned. The revised arms are bittersweet to me. There's actually a hand now instead of a triple missile launcher. You still get a missile launcher, but it's not hair triggered. On the down side, the hand doesn't close in a fist. It also would have been nice to have at least a pinned wrist. I found the back piece to be annoying as well, since it does not lock in place. 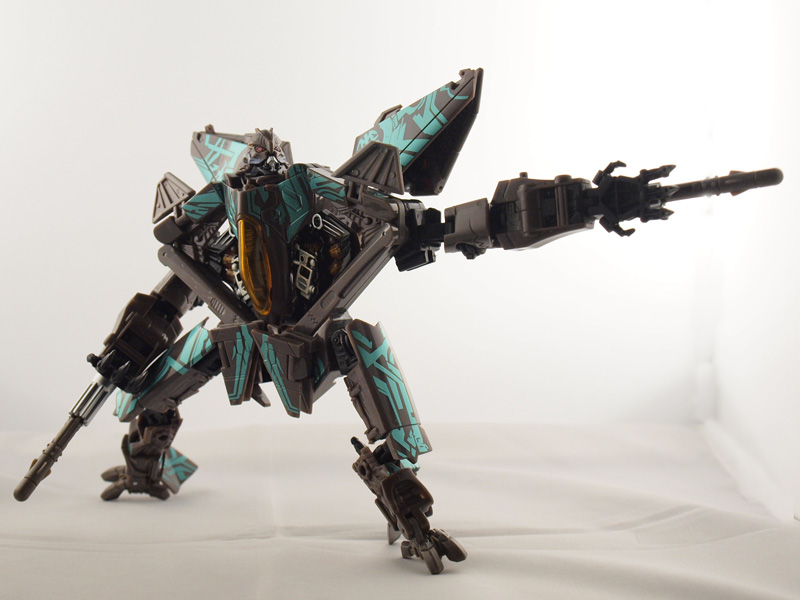 
Chicken legs just don't have that much articulation to them, sadly. Overall, the articulation ability of this figure is below average.

This is perhaps one of the most unique transformations I can remember. Fold the winglets on his shoulders down. Pull up on the wings behind his back and fold them around so they latch together. Rotate the arms so that the launcher is at the back, then push the forearms in. Pull on the knees so the lower legs come straight down. Rotate the feet, fold them towards the back and fold down the tab in front before pushing the lower legs in. Spread the arms out. Unlatch the legs at the waist and pull the legs so they line up to the arms.

Fold out the wings on the waist and position them so they are perpendicular. Rotate the chest pieces 180 degrees to form the horizontal stabilizers. Pull up slightly on the tabs besides the jet cockpit (but not too hard, or they'll pop out). Fold the legs around so that the feet end up beside his head. Finish folding the leg assembly upward to form the fuselage. There is a tab on the belly to lock everything in place. Fold the arms into the belly, locking them together with a peg located between the elbow joints. Fold the wing assembly to the back. Carefully fold the wings up to lock in place via a peg towards the base of the wing front. Fold down the winglets on the front. Fold the nosecone into place. Adjust the stabilizers and wings as necessary to finish. 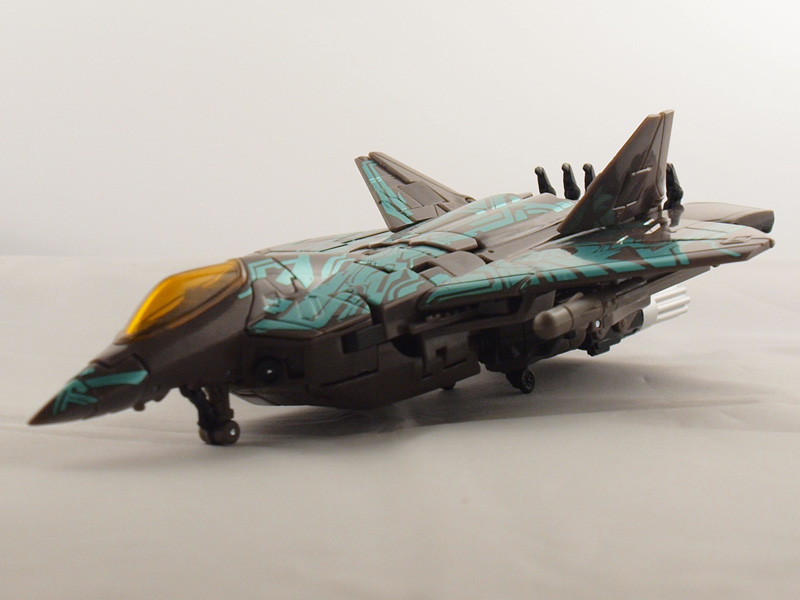 I will give credit for one thing. The jet mode is a major improvement over the 2007 mold. Whereas the 07 model was fat, this new mold is streamlined and does the F22 Raptor it's modeled after justice. The launchable missiles now can clip to the underside of the wings. There is now also 3pt landing gear. A nose wheel neatly tucks in below the cockpit, while the rear wheels fold into the belly. 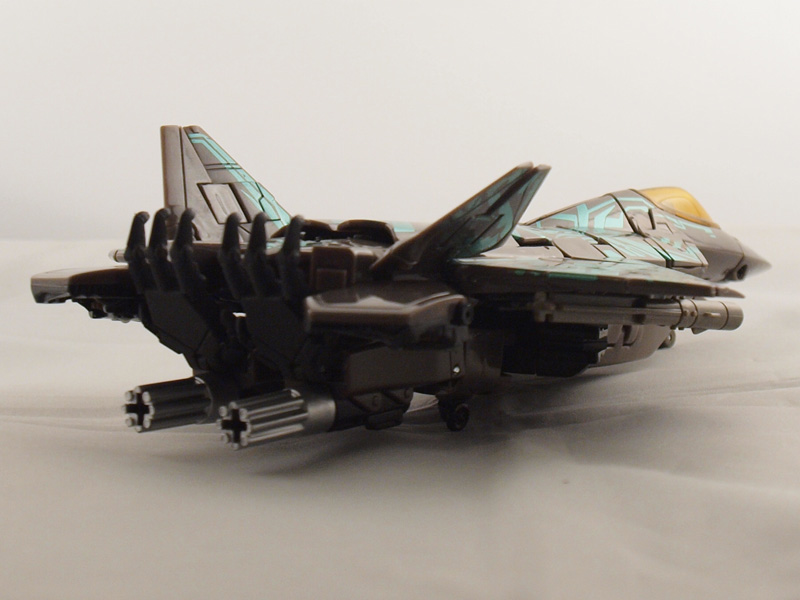 Though a major improvement, it's not perfect. The hands have no place to go in alt mode. The best one can do is fold them in to wrap around the rear of the jet. Viewing from the top, there are an excessive amount of panels and gaps that break up the cleanliness of the mode. Despite that, it's still a great looking jet.

A give and take as far as improvements versus the 2007 figure
Robot Mode:

A vastly superior alt mode with only slight hiccups
Overall:

If you never picked up the 2009 original issue, it could be worth the hunt. Subtract 1 point if you have the original already