Usually, when a character appears in a Transformers comic it's simply for the story line. However, IDW is changing that. Premiering in the All Hail Cybertron series, the Autobot Drift now gets his own action figure.

Autobot Drift used to fight for Megatron, and was known as one of the most terrible warriors ever to stalk the face of Cybertron. Something happened that changed him, bringing home all the horror he'd inflicted. Since then, he has hunted the Decepticons from one end of the galaxy to the other, bringing his own brand of justice to the evil robots. 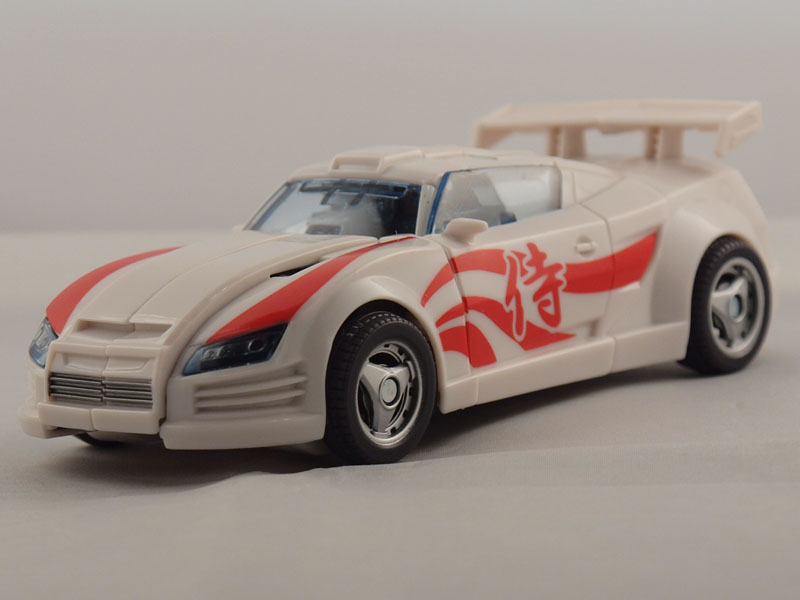 Drift's alt mode is a Earth type modded sports car. The car is white with red body accents on the sides and hood. Cybertronian scripting can be found on the doors. The windshield, door windows and headlights are done in blue translucent plastic. 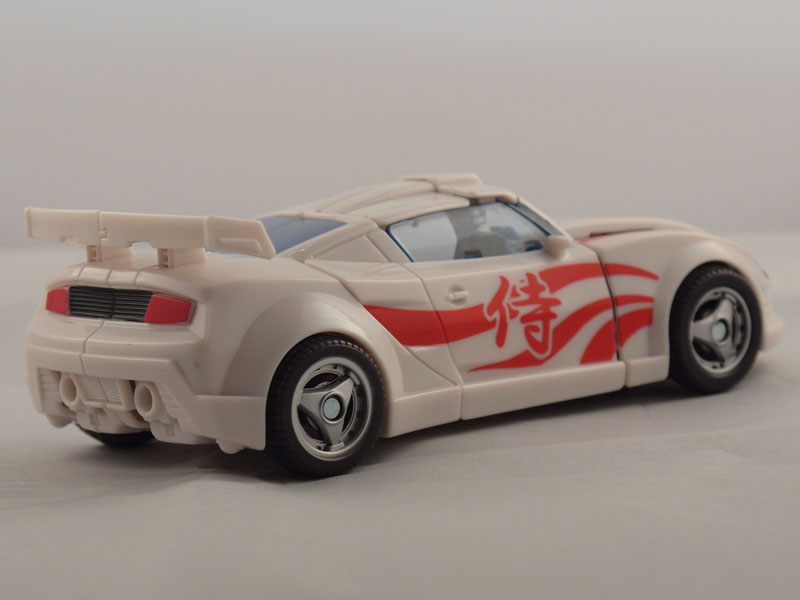 The car definitely has the modded look down, from the low ground clearance to the roof scoop and rear spoiler. Though the hood has a power bulge look to it, from certain angles it can look a bit off. As a final note, his longsword stores under the belly of the car via two clamps that the sword snaps into.

Start by slightly pulling the front fenders away from the hood. Make sure the hood splits in 2 while doing this. Take each half of the hood and fold it over the top of the fenders. Pull the back of the front fenders so the front halves touch. Pull out the doors and rotate them back 45 degrees. Fold in the door windows. Pull forward the windshield and peg it into the slot above his chest.

Take the rear end of the car and fold it around 180 degrees. Push in the rear of the roof so it sinks into the space below his knees, then pull down the feet. Align the feet so they slip into the red plates on his shins. Rotate the front fenders so the headlights point to the back. Pull on the front wheels to dislodge the arms and fold them out into place. 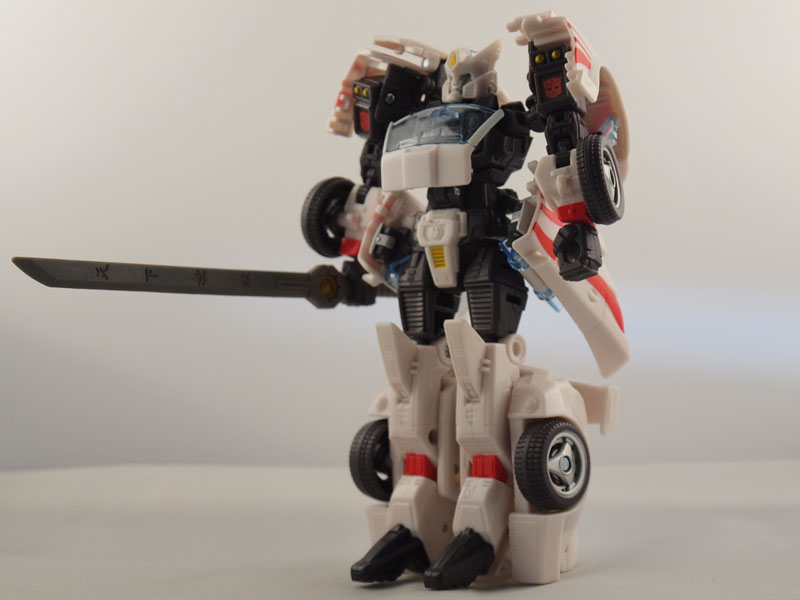 Drift's robot mode adds a bit of color, including the bronze upper limbs andd yellow on the groin, forehead and shoulders. The eyes feature blue light piping. The pipe is a very thin slot on the top of the head, so getting light in can be tricky. 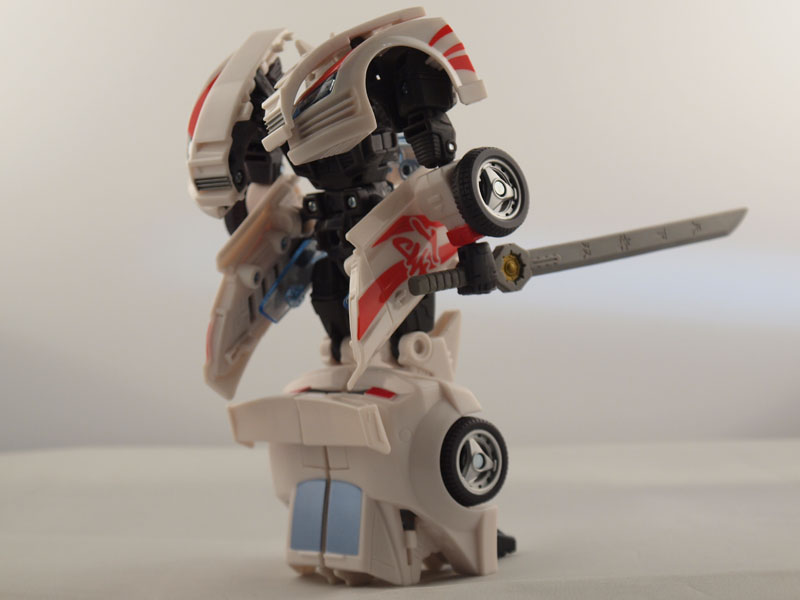 Drift's main weapon is his longsword. The sword has 5 Cybertronian symbols on both sides and is long enough so that he can grasp it with both hands. It is made of soft rubber, so while pliable it'll be interesting to see how it stands the test of time. Should you want closer combat for Drift, each 'sheath' on his hip conceals a short sword. Need something more long range? He also looks to have a pair of small missiles on each shoulder. 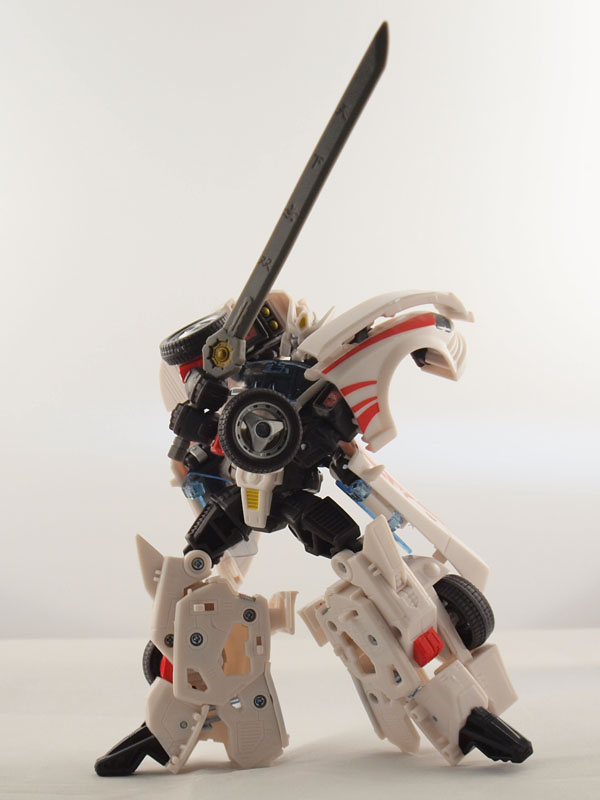 
Posing is amazing on this figure, especially since he can grasp the longsword with both hands! The only complaint here is that the doors, which form hip sheaths, can get in the way. 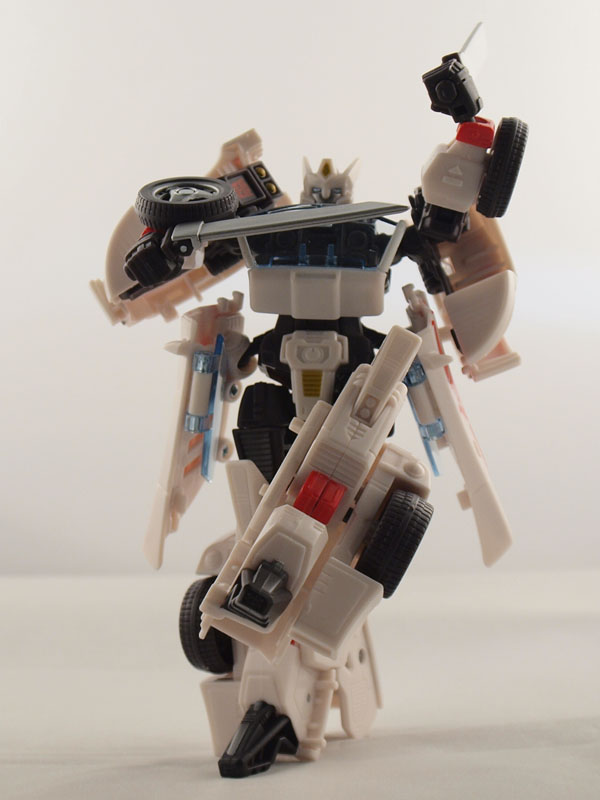 A deluxe that is truly in a class of it's own.