So far, the Power Core Combiner subline has been a sort of mixed bag. While the commanders themselves are generally liked, the overall effectiveness of the drones is spotty at best. As we enter the second wave of product, one wonders if the drone effectiveness will improve. Our first look at wave two is at Double Clutch

Double Clutch has always been a master of diversionary tactics. His entire team is built around the idea of confusing and disrupting Decepticon operations. The speed and noise of the Rallybots alone is enough to strain any robot's sensors. Add to that all the electronic countermeasures built into the team, and the Rallybots become the single greatest threat to Decepticon strategy. 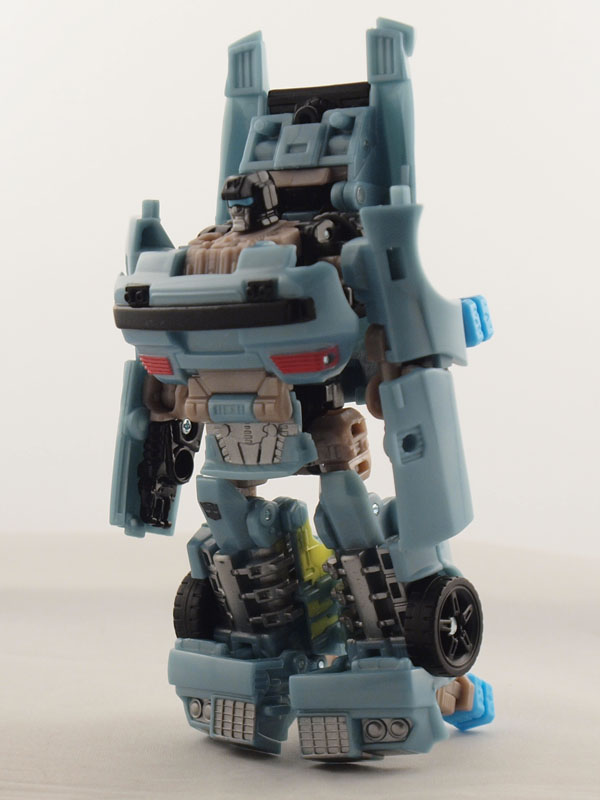 Double Clutch is a mostly light blue robot with some silver and black accenting. His overall stance is pretty squat, even for a Scout class figure. What's worse, he has a hulking backpack that sticks up way above his diminutive head. 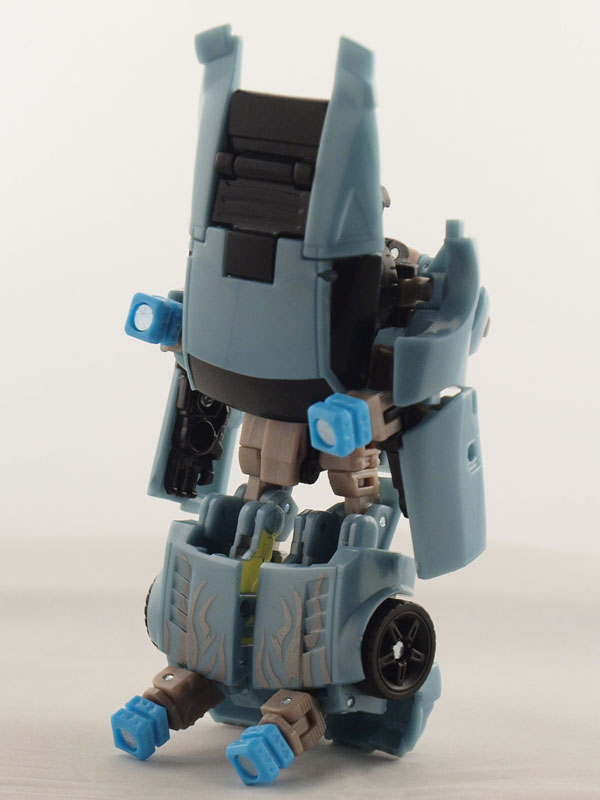 The commander mode comes off as flimsy. The forearms easily pop off their elbow ball joints, and the hip joints are excessively loose. Add that to the combiner port that juts out from his elbows and you have one clunky figure.


Hip articulation is ridiculous given the ball joint setup. Also pretty sad that the shoulders can have ball joints but no spread.

Lift up the hood behind his legs and tuck the combiner ports in. Close the hood, then fold the feet back to form the grille. Pin the legs together. Peel back the backpack. Fold the combiner ports on his elbows inward. Fold in the forearms to create the doors. Flip up the chest, then rotate the exposed spine 180 degrees. Fold out the wheels, then flip down the arms to join the doors to the fenders. Position the chestplate so it becomes the rear end assembly. Fold down the backpack to form the roof. 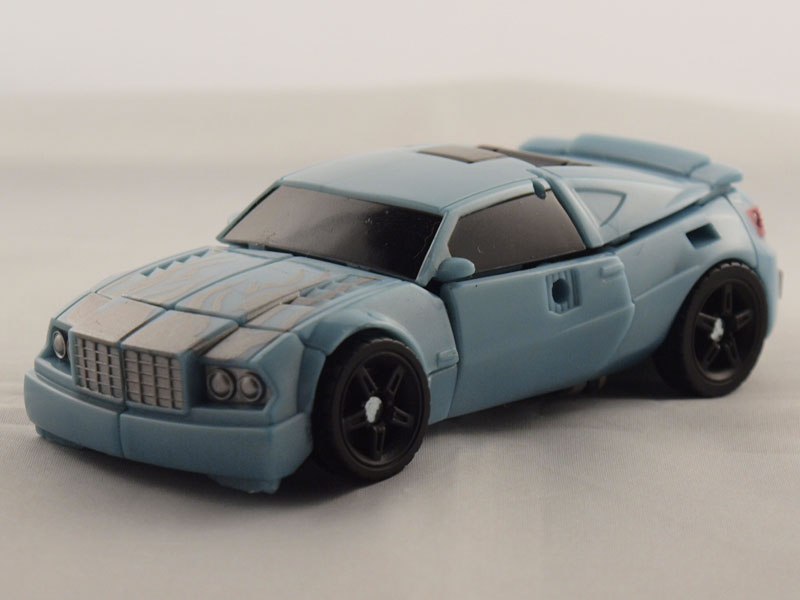 The end result is a tidy little sports coupe. The front end is very Dodge Charger in looks and features a silver flame accent. The rear resembles a fastback design. 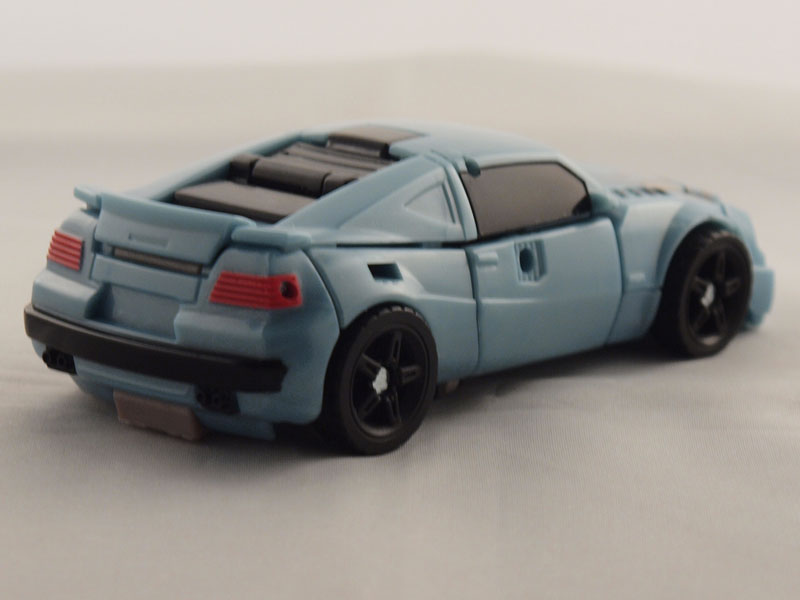 The overall design of the vehicle is OK, but the fit and finish is somewhat poor. Gaps are most noticeable by the A-pillar and beltline. Overall, a nice design but it doesn't hold well together.

Bombshock features four drones that do not have an individual robot mode. They are a formula 1 racer, a black sports coupe, a blue hatchback with a white hood and an orange tuner hatchback. Like the other 5 pack drones, they combine with Double Clutch (or any other Commander) to form the Combiner mode.

Twist the legs to the outside so the yellow paint shows on front. Fully expose the combiner ports on the legs. Spread out the legs as far as they will go then bend the knees to form the thighs. Fold in the head. Flip out the black door that forms the backglass in alt mode to expose the combiner mode head. Fold down the rear quarterpanels so the pegs mate to the 2 holes on either side of his neck. Pull the head up slightly to position. Rotate the arms so that they point straight up. You'll note that on both doors there is a peg hole. You'll also see two pegs behind the Combiner mode head. Your mission is to mate those pegs to the holes on the door without popping off the elbow joints. Position the combiner ports on the arms to finish. 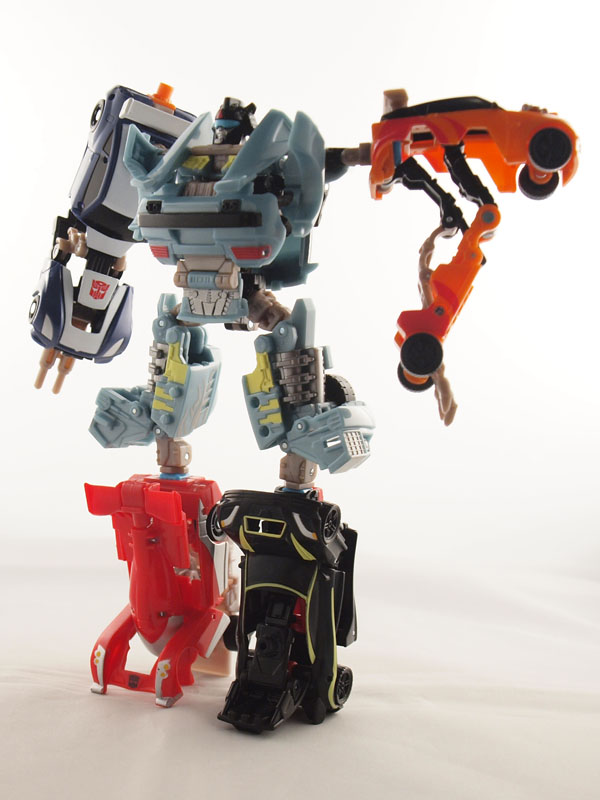 One thing I will say for Double Clutch's combined mode is that it's the most symmetrical of the ones seen thus far. On the whole, he's one of the better looking combiners. 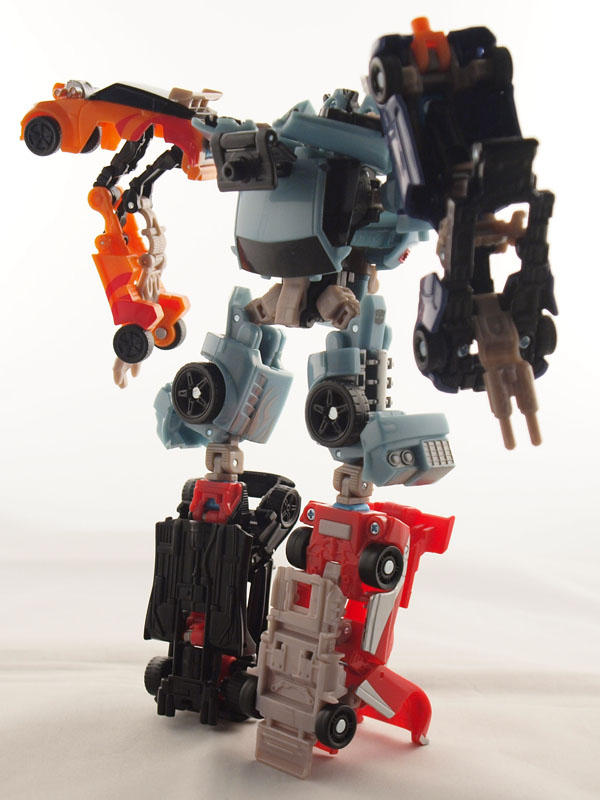 What really mucks it up is the shoulders. The pegs don't stick very well and, worse yet, the ball joints holding the shoulders together likes to pop off. A very fragile setup that will require extra care when handling.

Find a fix for the shoulders and he makes a great combiner. Otherwise, he's mediocre at best.