With the release of the Classics and Universe 2.0 lineup, a triplechanger was always part of the first wave. Generations decided not to go that route, instead blessing us with a quasi-triple changing robot instead. Though most fans have named him Straxus, after the G1 Marvel Comics Decepticon dictator, Hasbro has decided to name him Darkmount.

Few robots achieve the same legendary status as Megatron, but Darkmount is one. He is just as famous on Cybertron as the impenetrable fortress that bears his name. From there, he ruled his small corner of the machine world with an iron fist, controlling his subjects with an equal measure of fear and pain. So terrible was his rule that even Megatron gave him a wide berth, and treated him with the respect due to an equal. 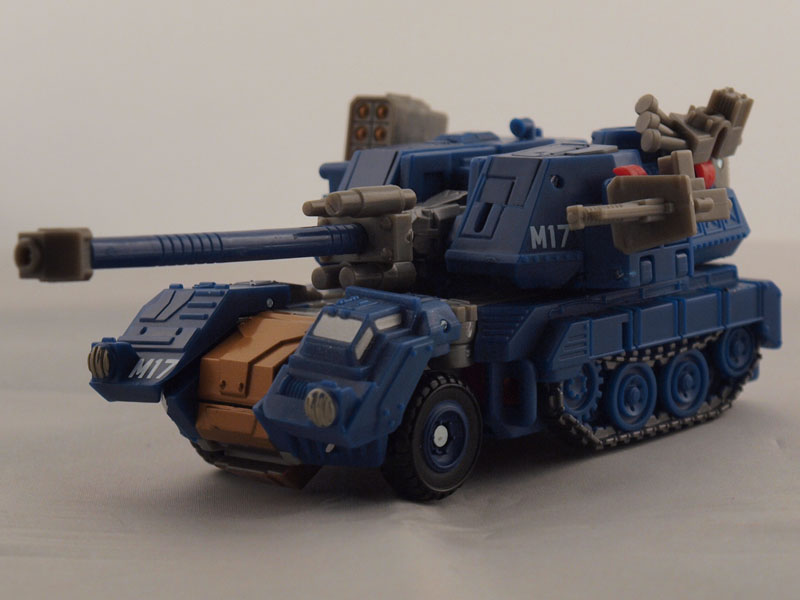 Darkmount is a blue military halftrack in his assumed alt mode. The halftrack features a full tank turret on the rear, with the front cab being an armored cab. The front is propelled by tires, with the rear using molded treads with two wheels on the bottom to roll around. In addition to the menacing tank turret, there are also three other ancillary weapons: a 6 missile battery, a three barreled surface-to-air cannon and a Gatling cannon. 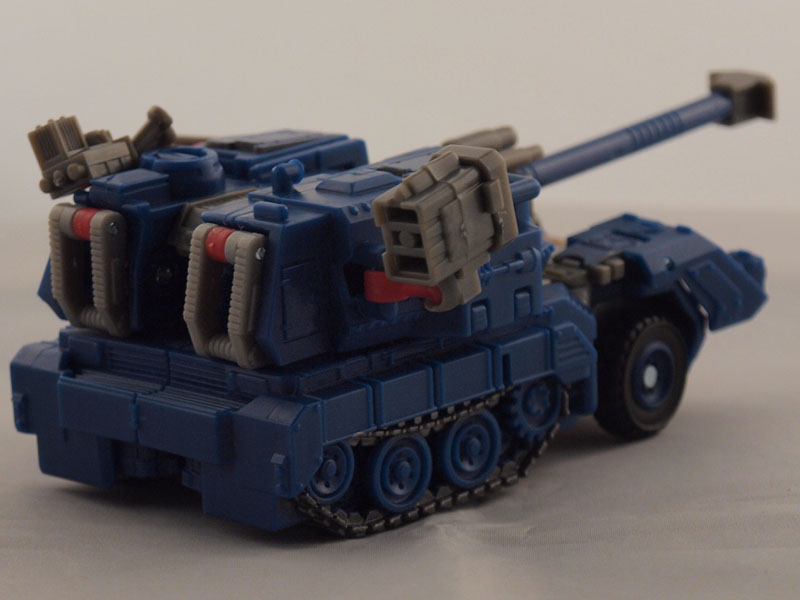 Each of the three smaller weapons can clip and unclip at various places of the halftrack via 'grab handles'. Therefore, you can arm Darkmount in a variety of fashions. However, don't let that lead you to think the turret is just for show. As well as having unlimited rotation ability, the barrel can also tilt up 45 degrees. Bottom line: This bot packs firepower. 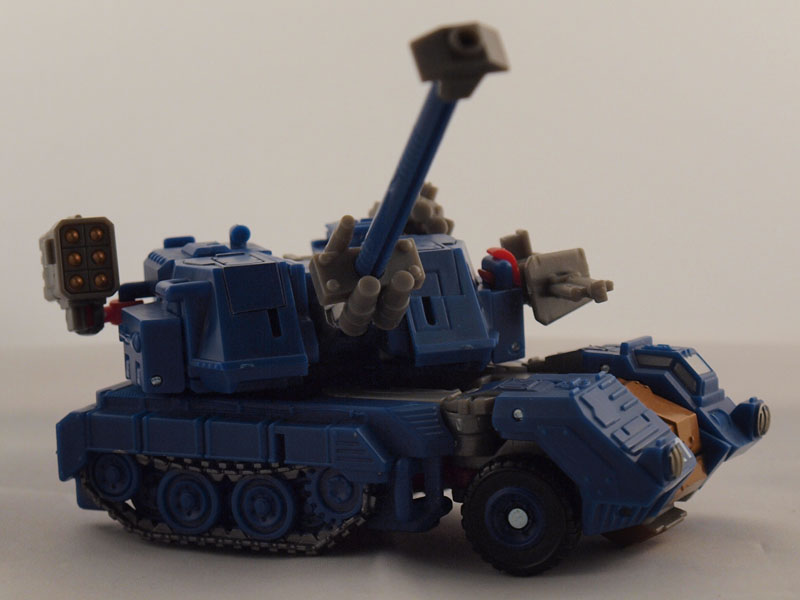 The battle station mode is actually the beginning of his transformation into his robot mode. Begin by taking the back of the treads and separate them 45 degrees in either direction. Separate the arms from the treads. Rotate the hands so the palms face the bottom. Point the treads downward 45 degrees. Lift up the fenders on the front end. Pull up on the turret, then rotate it 180 degrees. 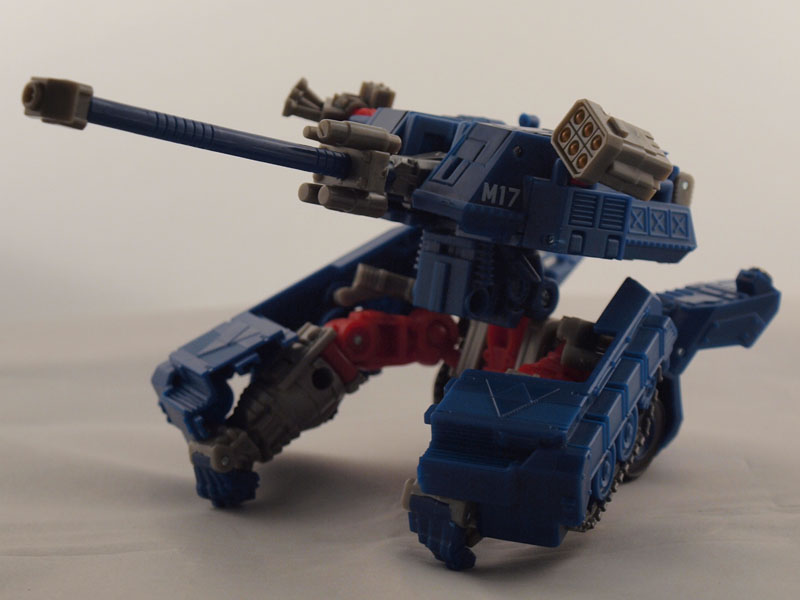 The battle station mode,while creative, is fragile. The 'base' does not lock in place, so any movement of the turret will result in readjusting the base. The turret retains all of it's maneuverability.

Continuing from the battle station mode, peel away each side of the turret to expose the hidden doors underneath. Finish opening the doors, which allows you to remove the turret. Flip out the sides 180 degrees rearward to form the legs. Rotate the waist 180 degrees. Push in the gray plate into his crotch. Lower the legs. Rotate the handles on the thighs 180 degrees then pull them down. Flip the panels in his shins down 90 degrees to form the feet. Be sure to flip out the haunches under his feet.

Pull out the treads so they spread against the sides. Push the front wheels in 45 degrees to push out the shoulders. Flip out the copper plate under the front end. Push down the front end until the copper plate can peg into the abdomen area. Carefully push the shoulders forward while steering clear of the treads. Push back the treads, then rotate them so that you can peg the tread halves back together again. Push back the fenders so they lay on his side. Pull the chestplate forward so that you can flip out the head. Be sure to put the chestplate back in place.

Take the small plate near the base of the barrell and push it to the tip. Flip the hook 180 degrees to form the battle axe. 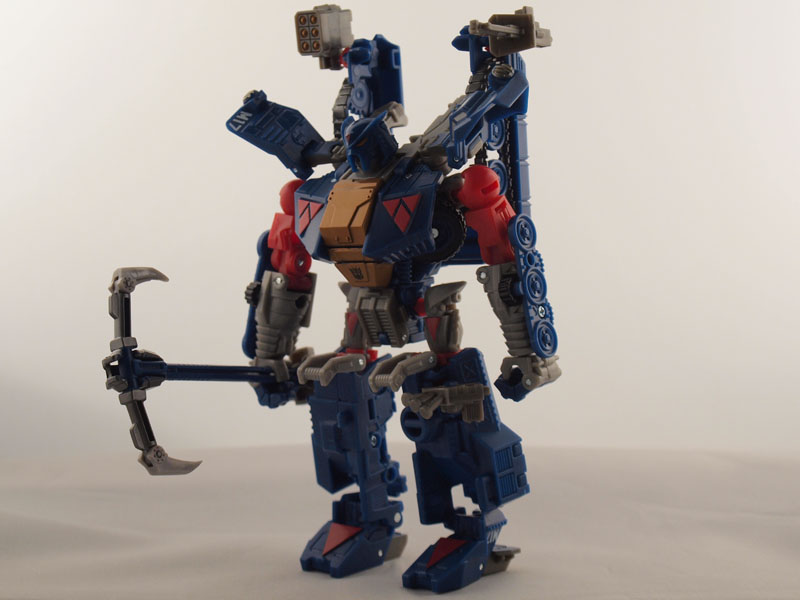 There's no denying the uncanny resemblance to Straxus in robot mode. Red shows up in this mode, particularly in the arms and upper chest. The head sculpt, while not possessing piping, is a dead ringer for the G1 tyrant. One early controversy with the figure were with the feet. A ball joint connects the feet to the legs, but it's only on one side. While tight initially, long term tension is questionable. 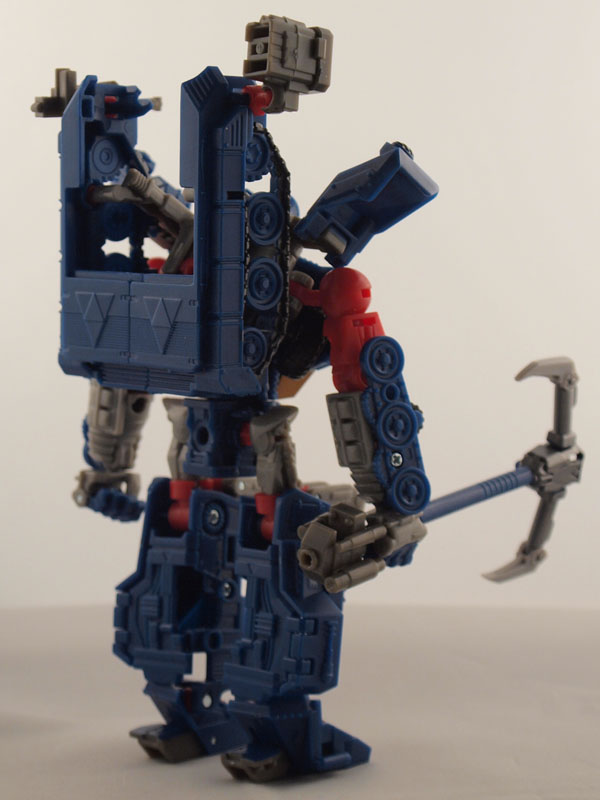 As well as wielding a wicked axe, the three ancillary weapons can be attached at various parts of the robot mode. Again, this firms up his offensive capabilities. In the event you'd rather engage Darkmount in hand to hand combat, the axe can be left in the curved blade position, or you can extend the tips to make it a straight blade weapon. 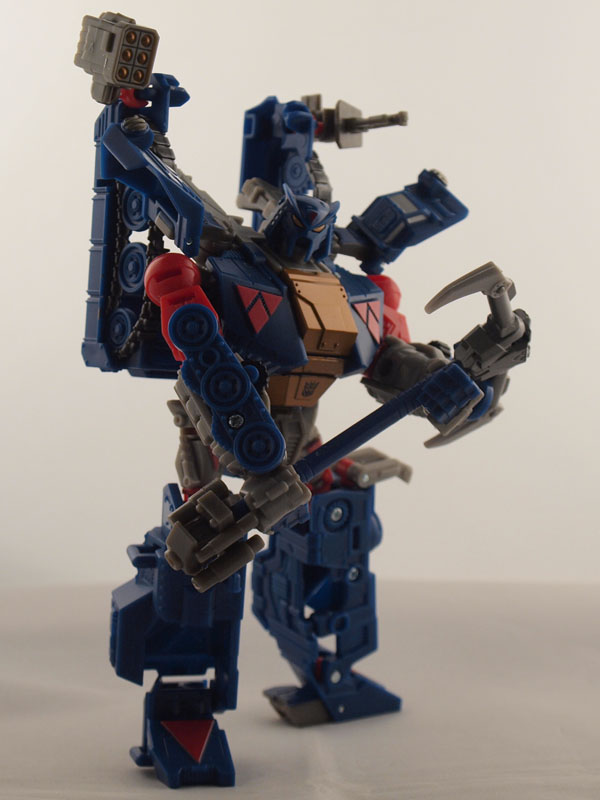 
Although articulation is great, questions will remain about the durability of the ball joints supporting the feet.

Armored to the hilt, with weaponry to match
Alt Mode:

Doubt exists about leg durability in the long term
Overall:

Over the test of time, he may actually be a 10. However, ball joints don't usually stay tight.