Rounding out the latest 2pk PCC release wave, we take a look at Darkstream (the repaint of Skyburst) and Razorbeam (the minicon from Smolder). Skyburst got a mediocre score on his review, will Darkstream be any better?

Even for most of the top Decepticon aces, low-altitude air combat is difficult and dangerous, but it's where Darkstream excels. He prefers being close to the ground, where he can trick pursuing craft into a crash. His partner Razorbeam just makes him better at cutting dangerous maneuvers even closer. 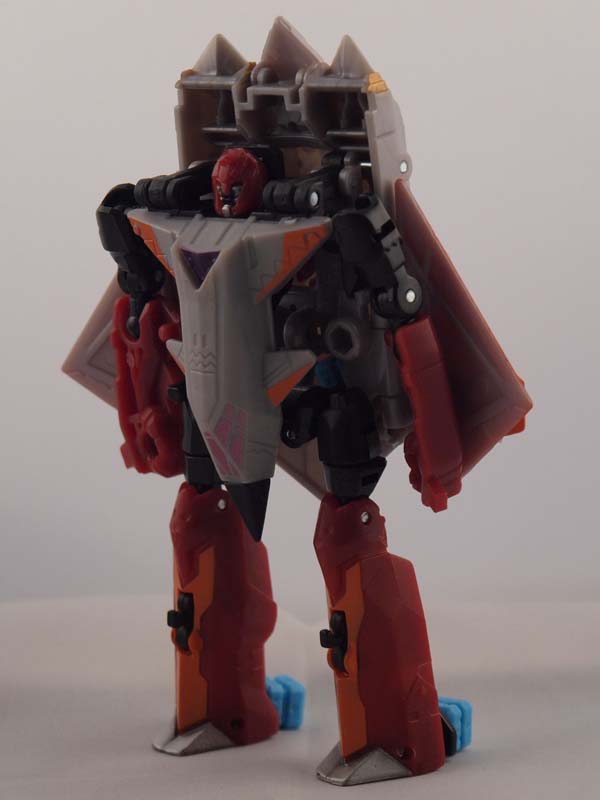 I will give credit to one thing. The colors bestowed on Darkstream look good. The forearms and lower legs are painted in crimson red, with some orange thrown in on the shins. The upper arms and thighs are black, and the chest is done in white with orange accents. A much better palette of color versus Skyburst. 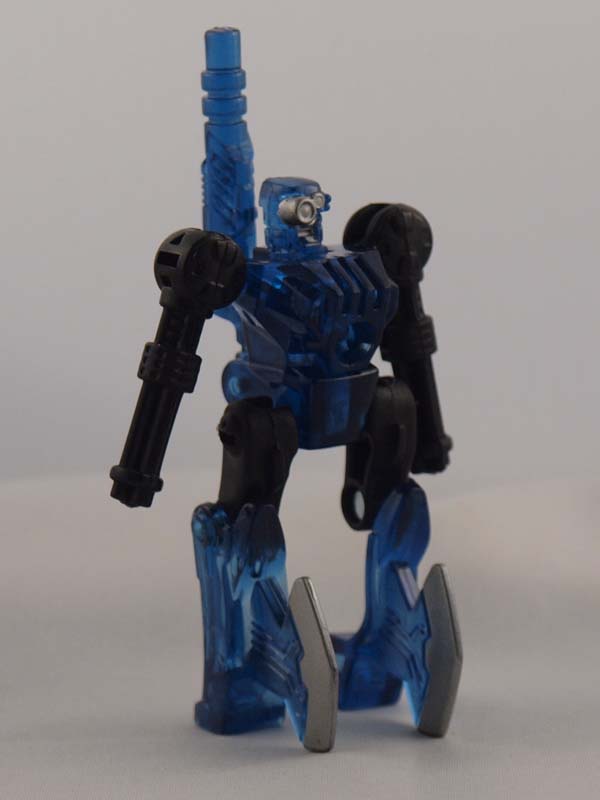 Razorbeam also gets a nice update, using a navy blue getup this time around. Where this figure suffers is with the 'partnership' Because the minicon port is on Darkstream's back, this makes Razorbeam almost useless in his armor mode. Worse yet, the pegs on Darkstream's hands are too big to wield Razorbeam in his axe mode. Therefore, you end up feeling cheated a bit. 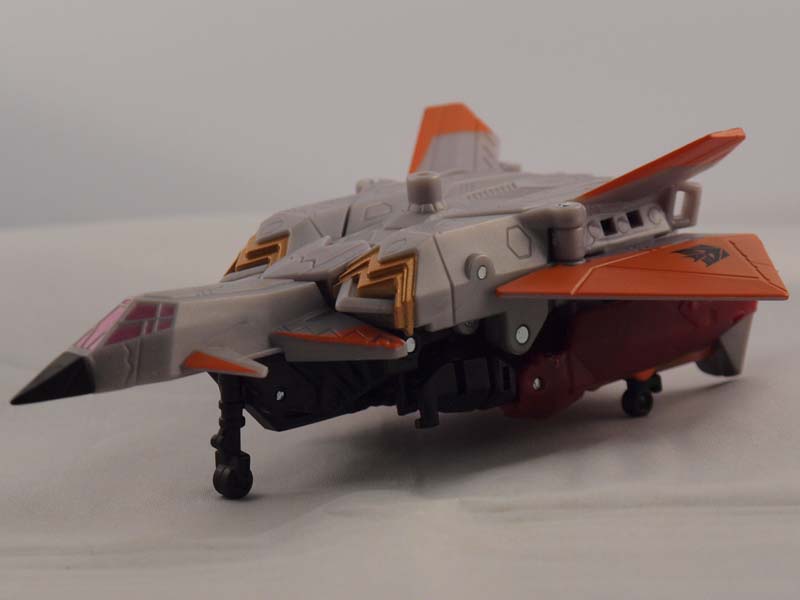 Darksteam's colors continue to work well in jet mode. The body is mostly white, with orange wings and stabilizers. The 3pt landing gear is also a nice touch for a Scout class figure. 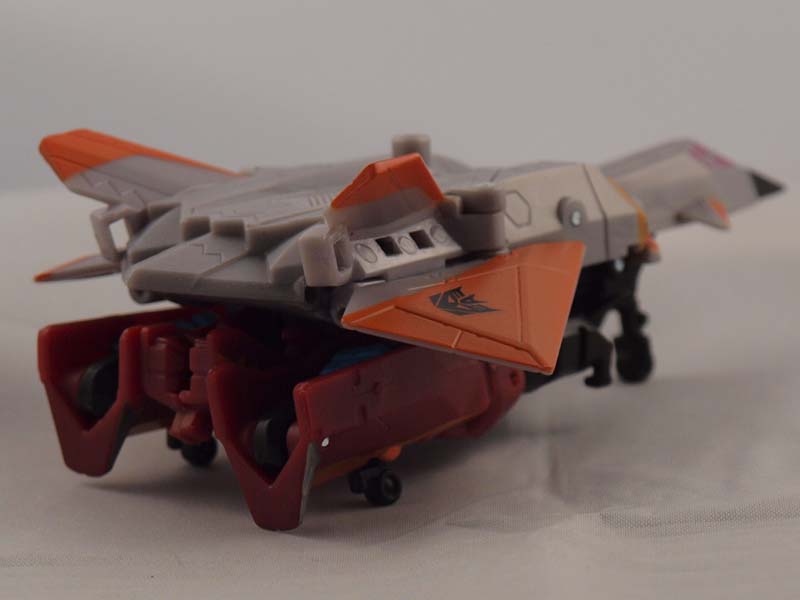 However, you still get that nagging feeling that this is a Legend KO. The transformation is simple, even by Scout standards. 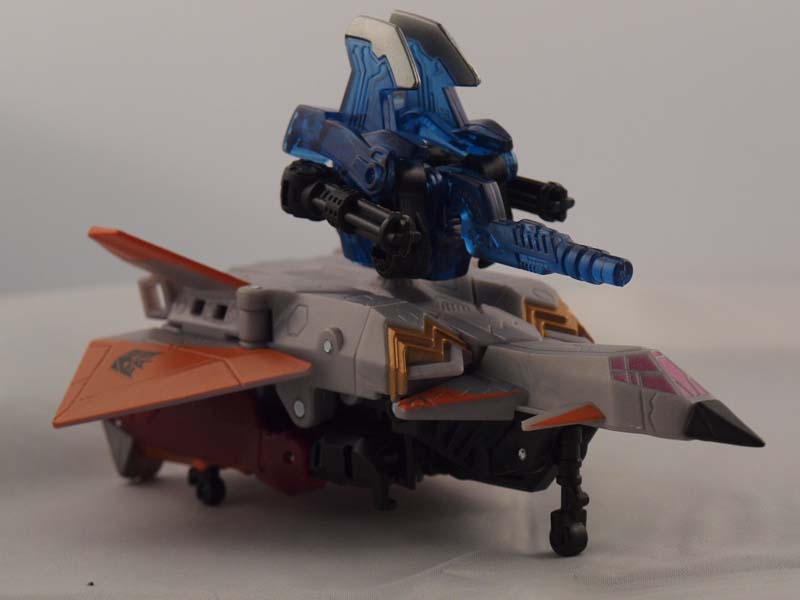 Fortunately, Razorbeam has much more usability in Darkstream's jet mode. While doing nothing for aerodynamics, the three barrel cannon does give him the offensive edge he lacked in robot mode. 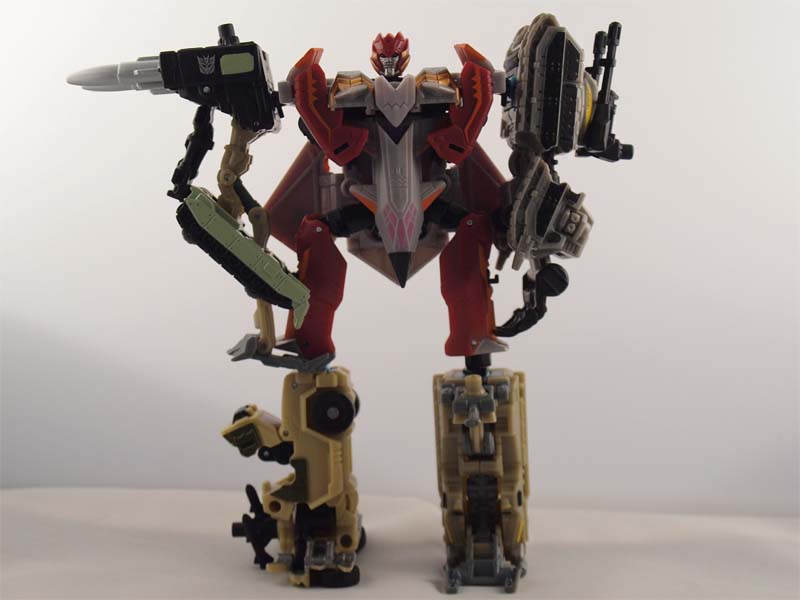 Darkstream's combiner mode is stable, so can be a good asset depending on the drones used. The coloration, like the other 2 modes, is also an improvement on Skyburst. That's not to say this is a figure that should be hunted down. It's still mediocre at best, and suffers a black eye due to the lack of interactivity with his minicon partner in robot mode.

Over-simple alt mode made livable by having good markings.
Razorbeam:

A good minicon spoiled by having no way to help his partner in robot mode.
Combiner Mode:

Even as a repaint, this mold just can't quite hack it.