You would think by the scores of Bumblebee figures that we have been pummeled with the last few years would have been enough. However, Hasbro doesn't seem to be satisfied that the yellow one has saturated the market enough. That's the only reason why, amidst all the Human Alliance and Ultimate Bumblebees that still clog shelves, they have decided to add a Leader class to the mix. Does the world really need another one? Let's find out.

Bumblebee was the first to try out the MechTech weapons system. With his speed and firepower both boosted to incredible levels, he began racking up Decepticon takedowns faster than Ironhide could even keep track. 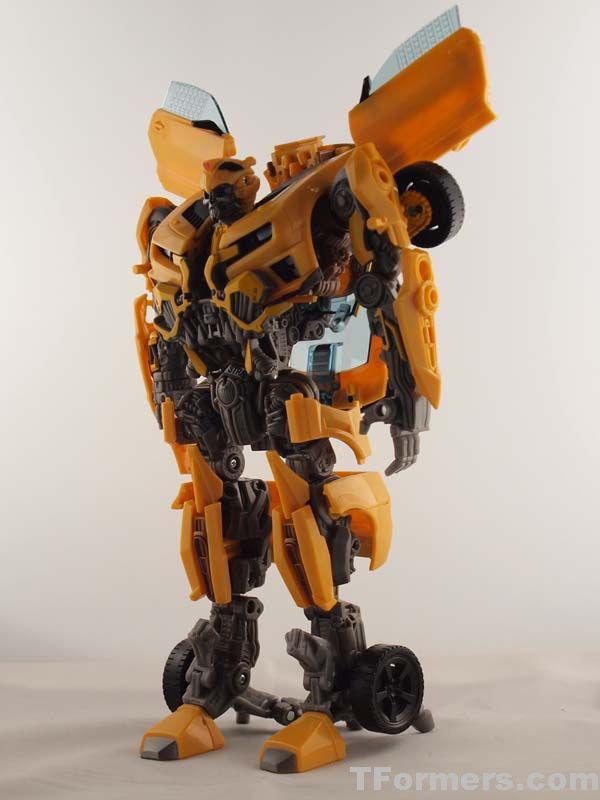 Yes, this is Bumblebee. And he does look like almost every other Bumblebee that the movieverse has thrown on shelves since 2007. Like some of the latest versions, they have gone with the right arm being a gun arm versus having a hand. You would think that, being a Leader class figure, you would have an option to deploy a hand. That is not the case here. At least there is big, blue piped eyes to enjoy on the head sculpt. 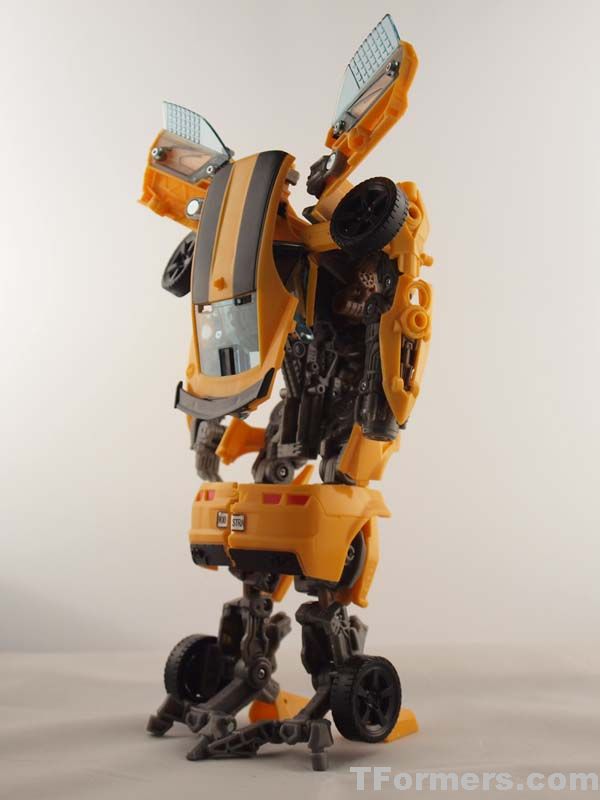 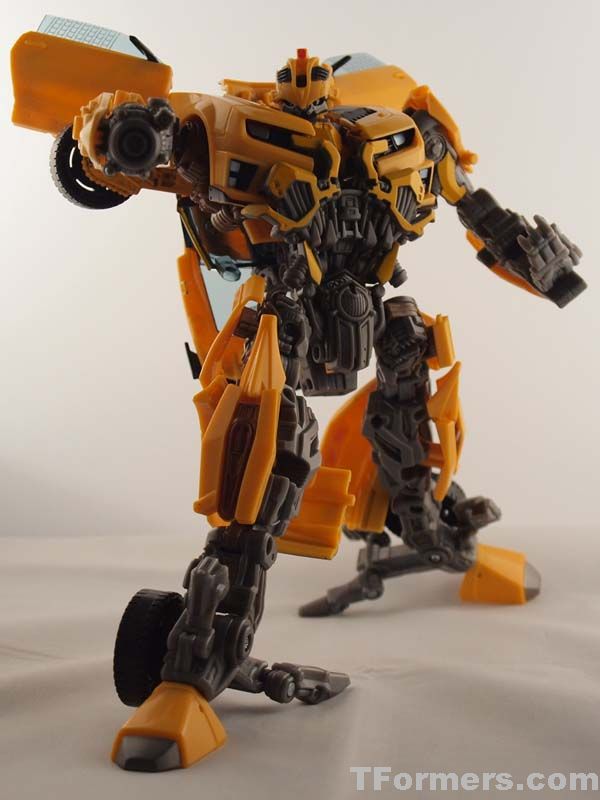 
Articulation is solid, and so is the footing. Just watch for kibble behind the knees, which might hang you up just slightly. 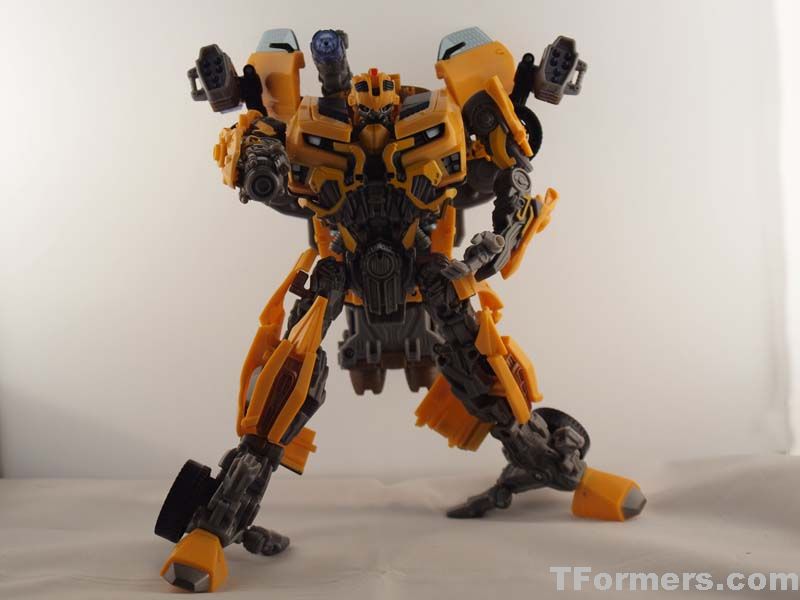 The main gimmick is, of course, the MechTech weapon. It's in the form of a rather ungainly backpack, which clips to the back of Bee. By pushing up on a red lever, you will extend a pair of missile batteries, as well as a shoulder mounted laser cannon. A transform-up sound accompanies the action. If you push back on the shoulder cannon, you'll get a blinking green LED light on the barrel, along with some electronic noise. Pushing back on the face of the missile batteries will give you a blinking orange LED, along with more electronic noise. I call it noise because it's a series of 'battle sounds' that just end up sounding like noise. You can also flip down the battle mask to accompany your MechTech upgrade.

(out of 9pts total) For $45, I expect more than an oversized Human Alliance knockoff with a battery operated backpack.

Everything flows pretty well together and, if you transform it per the instructions, everything fits nice and tight. As a plus, these instructions are pretty easy to follow.

(out of 6pts total) Although simple for a Leader class, it's done brilliantly. 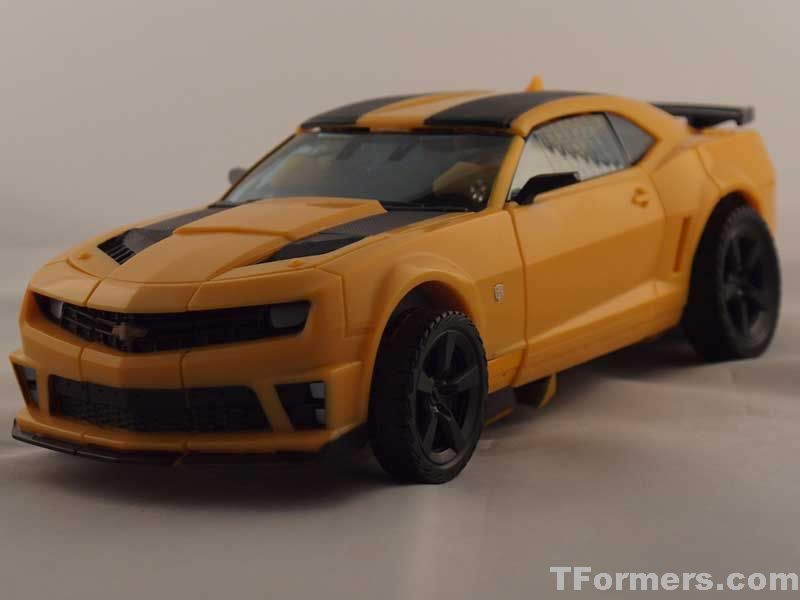 Bumblebee retains the current generation Chevrolet Camaro alt mode, as well as the yellow paint job with black comp stripes. The rims are also blacked out. In an interesting twist, the door windows are molded with racing type cloth imprints. 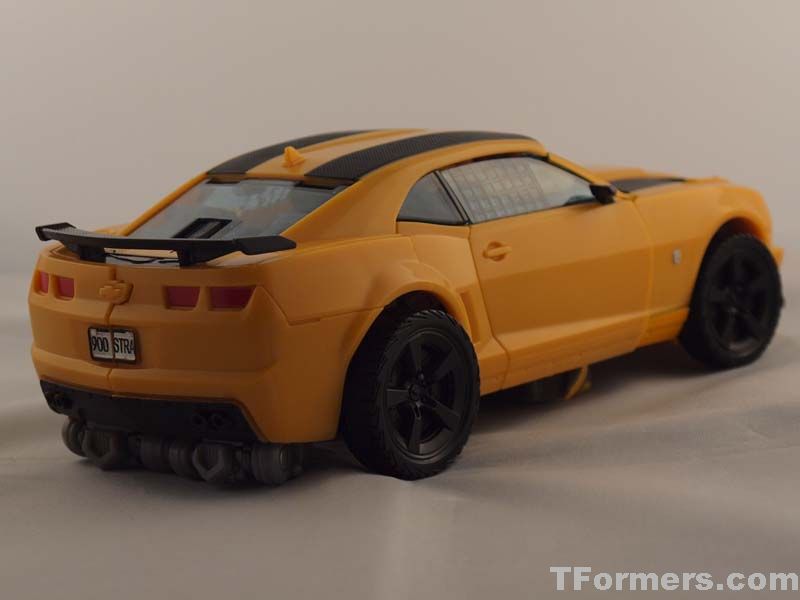 Most of the important details are present. Bumblebee features hood scoops behind the headlights, a fuel filler cap and even a new license plate. Another interesting change is that the stripes, as well as the rear spoiler, are textured. It almost wants to remind you of a carbon fiber finish. What ruins the look are the wheels. They are very plasticky and just cheapen the look. Doesn't help that the arms are exposed through the windshield or that there are various slots in the rear glass that support the MechTech system. I would expect this out of a Voyager or HA figure, but not a Leader class. 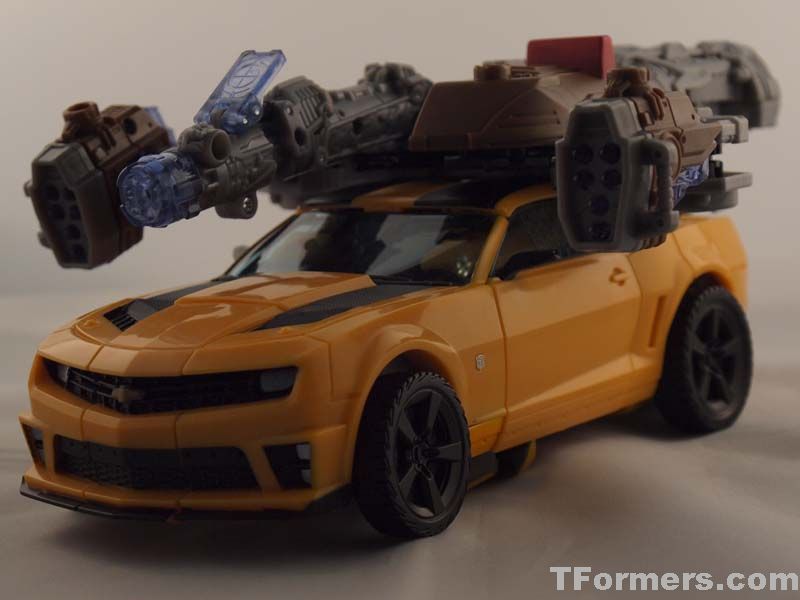 The MechTech weapon again is the main agent in playability. It does look rather silly bolted to the roofline, and offers no new functions as used in alt mode. You could assume that the vents in the back of the weapon might act as a power boost, but that might be reaching.

(out of 9pts total) Decent, but comes off looking a bit cheap... again, like a knockoff. 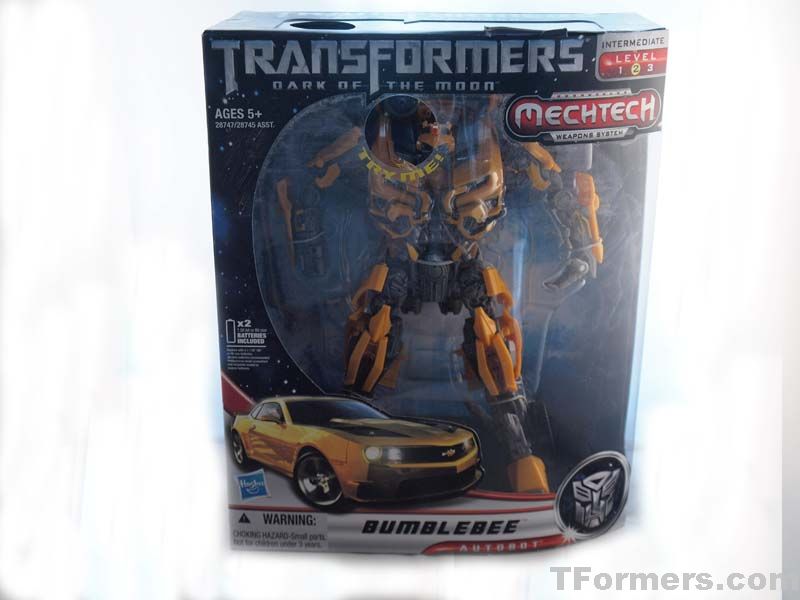 That being said, this isn't a $45 figure. With all the other Bumblebees that have plagued the market, this one really hasn't brought anything new to the table except a transforming backpack with mediocre sound effects. Having the rear end of the alt mode hang off the knees was lazy on the designer's part as well. This was the opportunity to copy the success of Starscream and make a large figure that excelled above all the others. That didn't happen here, and it's rather disappointing.

(out of 6pts total) For $45, there should have been more. At least he'll hold up over the test of time

Perhaps it's time to stop bombarding the shelves with Bumblebees. For both lines, we have seen at least 2 versions of every mold released. Likely, this will not be the end of it as there will certainly be a redeco or slight retool of this mold. It's obvious that the engineers and designers are either burned out or running out of ideas for Bee. If you just gotta have a big Bumblebee who isn't saddled down with gimmicks and electronics (outside the MechTech weapon), them he's an OK buy. Otherwise, he's likely to be just another shelfwarmer.