Yes... another Deluxe class Bumblebee. I know, you likely have at least a half dozen of these littering your collection already. You wonder what the point is of owning yet ANOTHER one. That's what this review is for. At the end, we'll see whether he's worth adding or if he's going to be yet another shelf warmer.

Due to popular demand, the old review system is being reinstated with some very minor adjustments. I appreciate all the input and apologize if anyone was frustrated with the other system.

Bumblebee has spent decades perfecting his fighting skills. With or without weapons, he is one of the most skilled fighters the Autobots have. he is dedicated to using his skills to defeat the Decepticons, no matter where they appear. 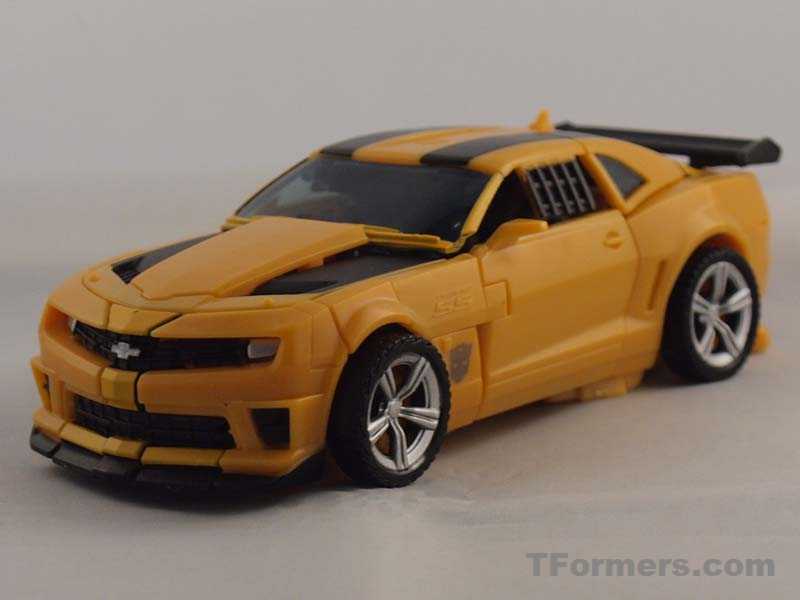 Even though he is still listed on the card as being a "Concept Camaro", he has interestingly enough sprouted some Camaro SS badging on his fenders. Most of his look is the same, albeit a few new touches. He now sports a black wing on his trunk. He also has gated windows on his doors, much like a track ready car. Oddly enough, he also has the clear factory window folded into his door, which can't be used in alt mode. 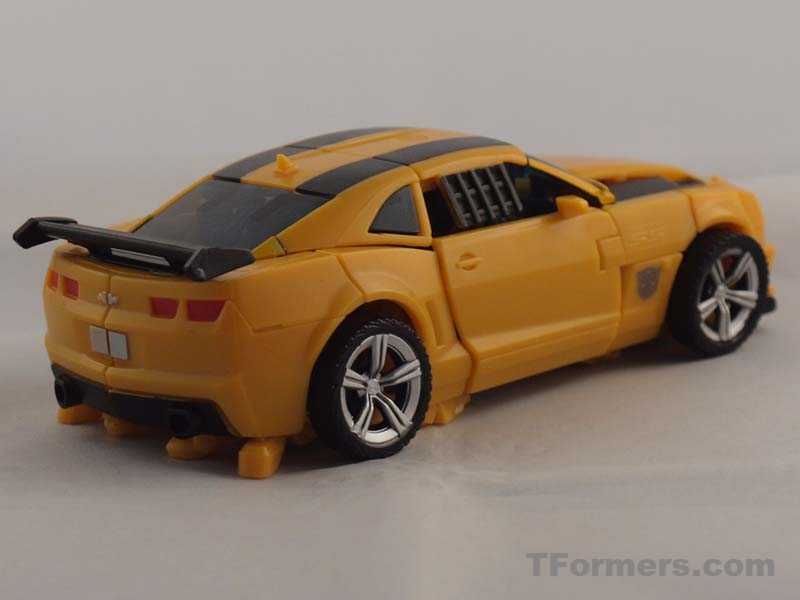 The MechTech weapon pegs onto the roof. It's rather boring looking with it's unpainted surface. Pulling back on the hammer will expose a larger muzzle, extend the barrel and raise a target scope. Sadly, you must keep your finger on the hammer as it will retract back when you let go.

Alt Mode Summary:Could have done without the gated windows, but otherwise not bad for a 'n'th version of this figure.

A couple of new tricks have been added to the transformation. It's almost a hodge-podge of the different transformations he's had in past molds. However, this melding actually works to an advantage, as you get a figure with perhaps the easiest and least frustraitng process yet. 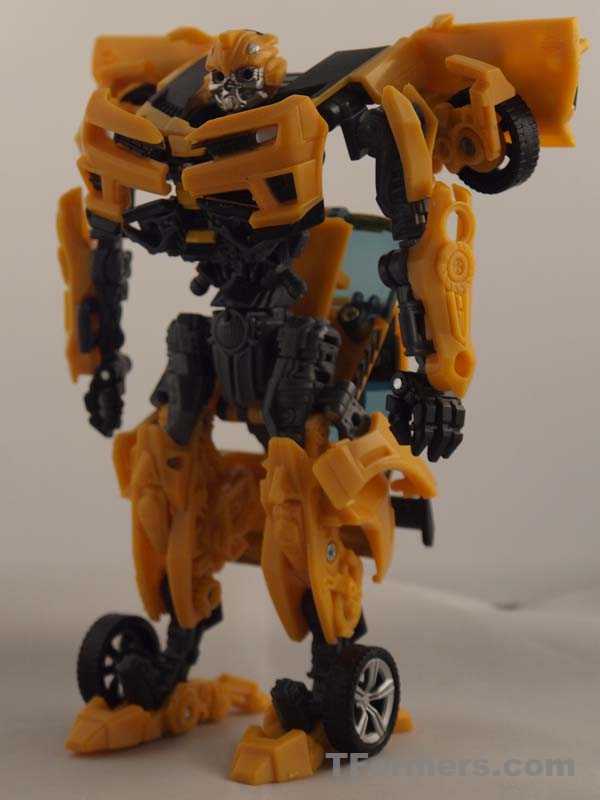 On the whole, there's really nothing new to see here. However, it is nice to see that he actually has both hands again. He also regained some of his movie accuracy in the process. One nice touch is that the head mold is chromed in the face, which brings some character out. The eyes are piped in blue. 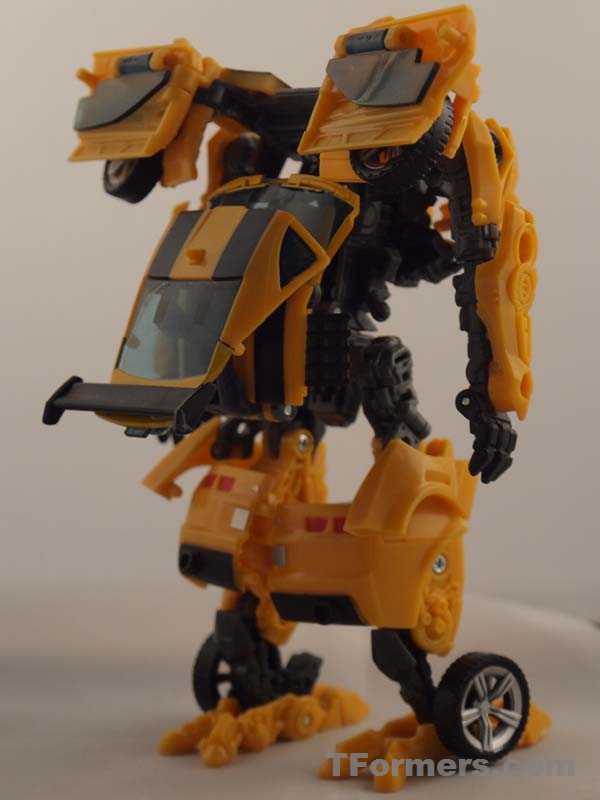 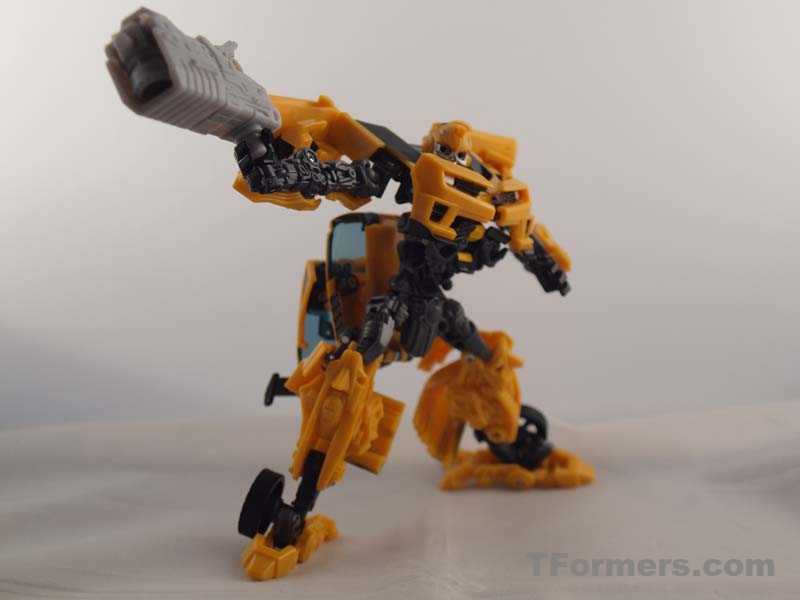 
This is perhaps one of the best jointed Bumblebees released. Restriction is almost nil.

Robot Mode Summary:He may not be new, but he's most definitely improved.

It's hard to assign a value. On one hand, he's been released almost three dozen times in almost every figure class there is. You reach a point of saturation where you don't even want to consider another purchase no matter how good he is. And this isn't the last, as a slight retool of this figure is already announced for a later wave. On the flip side, he does have noted improvements. He's very solidly built and doesn't seem to have any durability issues, unlike some of his predecessors.

Everyone will have a different take on this figure. Some just won't bother. They can't be blamed. After all, how many different styles of the same character can you possibly own without being burned out? For those who take the chance, however, you may find this to be the superior Bumblebee out of all the deluxes. There's no pieces that will pop off, his articulation is second to none and he's not laden with useless gimmickry. Therefore, it's your call.