Icepick - Dark of the Moon - Figure

If you can't salvage the Power Core Combiner line, alter the story for the next attempt. That's what has happened with Icepick, who lost his minicon and is now forced to pair up with a human. Icepick was a likeable PCC figure, but will he keep that favor in his new guise?

Icepick dislikes humans intensely, but with his combiner team destroyed, he is desperate for an effective partnership. Rogue soldier Sergeant Chaos more than provides, offering Icepick intelligence on Autobot targets in exchange for a chance to go along on a destructive ride. 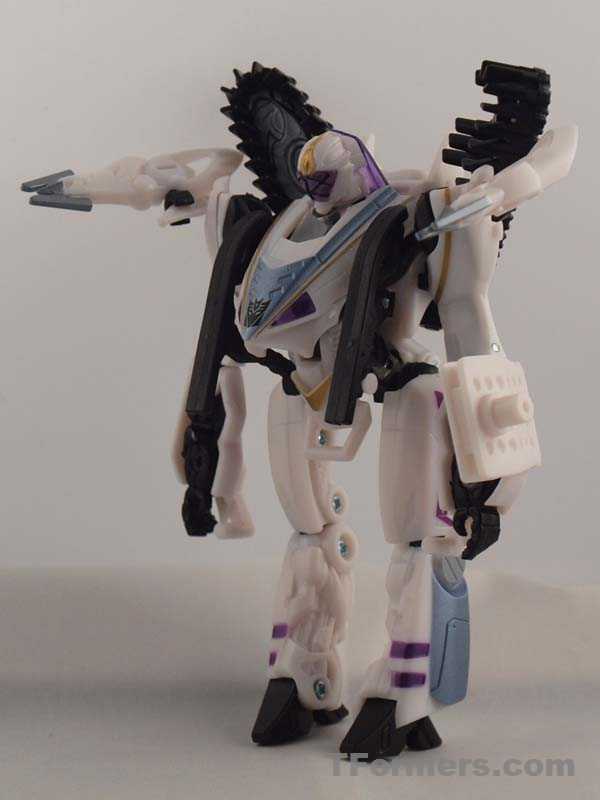 At first look, the robot mode seems oddly proportioned. The legs look skinny and the shoulders are way too broad. The colors go well together, with white being flanked by purple, gold and ice blue. The head sculpt has a resemblance to his Combiner mode head but, strangely, no piping. The left arm is cursed with a square panel holding a peg, which really throws of the symmetrics on the robot mode. 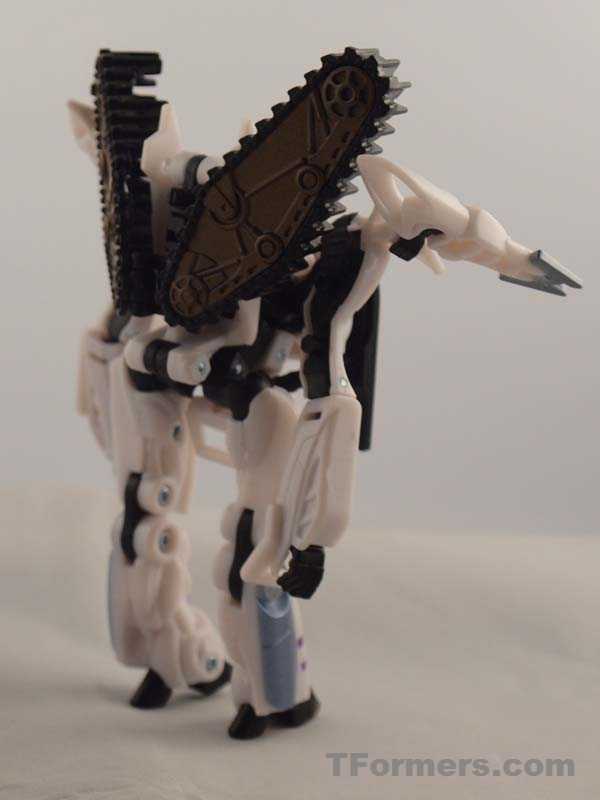 Icepick carries 2 clip on rifles with him, which attach to his shoulders. They don't attach very well, though. Try to fine tune the positioning too much and you'll slide them right off the shoulder racks. You can also attach them to the pegs below his hands, but you'll have the same 'slide' problem. 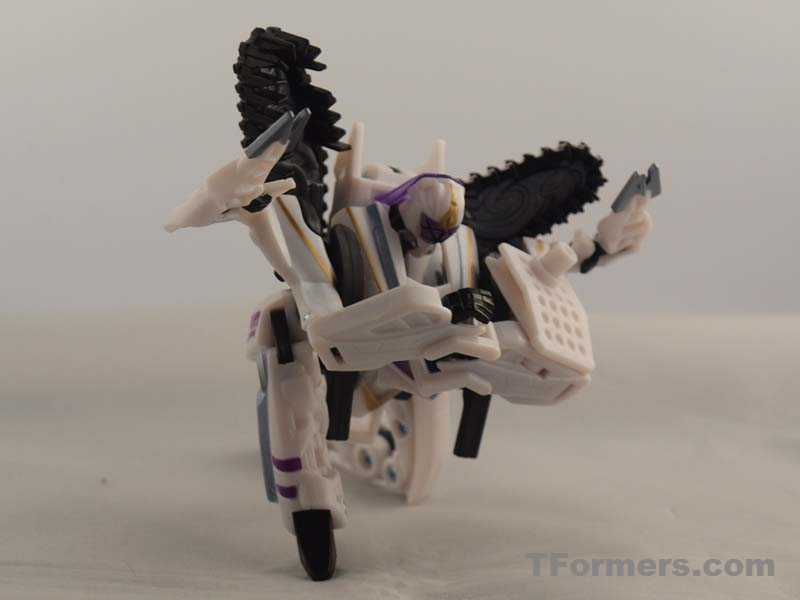 
The footprint is a bit small, so you might have to experiment with balance to get the pose you want. That is, if you're not fighting to keep the arms on their ball joints. 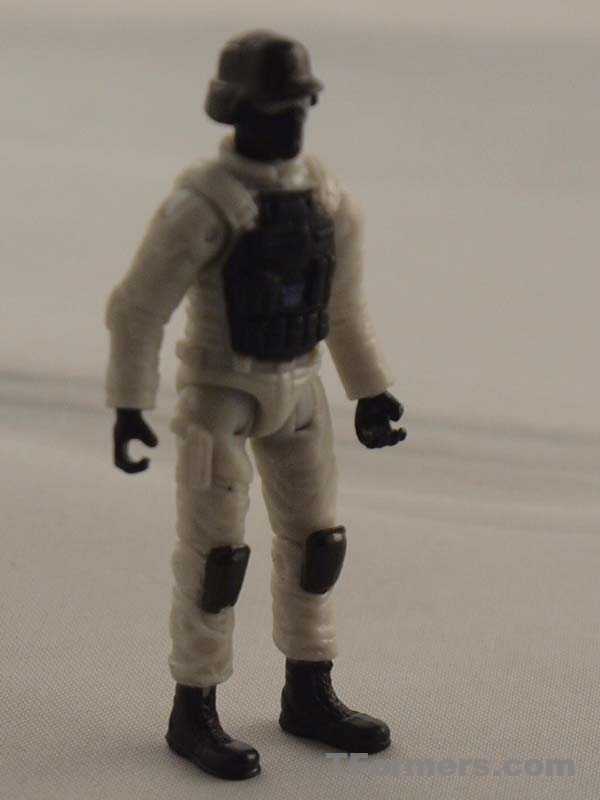 Sergenat Chaos is small on details but looks like a natural to pair with Icepick with his snowsuit. You might even think he was a long lost relative to GI Joe's Major Bludd.

Converting to alt mode takes a lot of twisting but it is overall very fluid. The hard part, if any, is making sure pieces and limbs don't fall off. Besides the aforementioned arms, the skis for the front of the snowmobile are on clips as well and can easily come off. 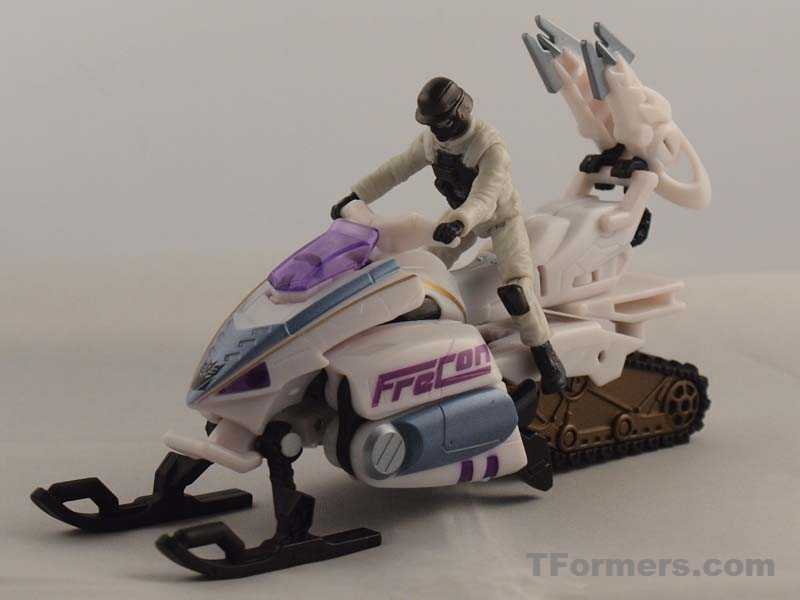 The end result is Icepick's snowmobile mode. The snowmobile features a pair of skis up front, with a tread in the back. FreCon is scripted on the sides. Tried as I might, I could not find a single reference for the word other than some obscurities. The snowmobile has a pair of handlebars that Sergeant Chaos can grip on to. 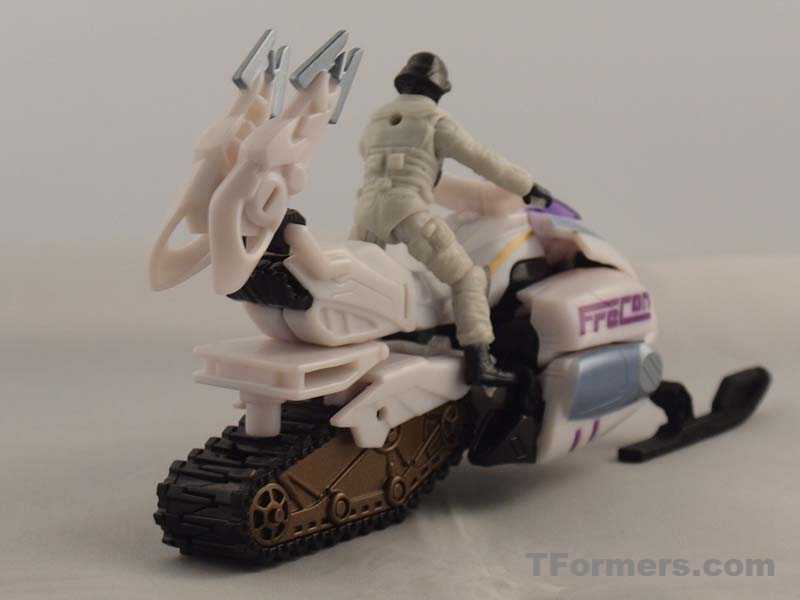 The guns clip onto the bar behind the seat. Fortunately, they tend to stay in place since there's nowhere to slide off. There is a bar underneath the vehicle that looks like it could take the weapons, but it's too small. Some people may be bothered by the exposed hands and feet, but they blend in enough to only be a minor annoyance.

Alt Mode Summary:By far the best mode he has.

Transforming to weapon mode is simple. Simply reposition the tread so it extends past the front of the vehicle, then invert the treads to form blades. 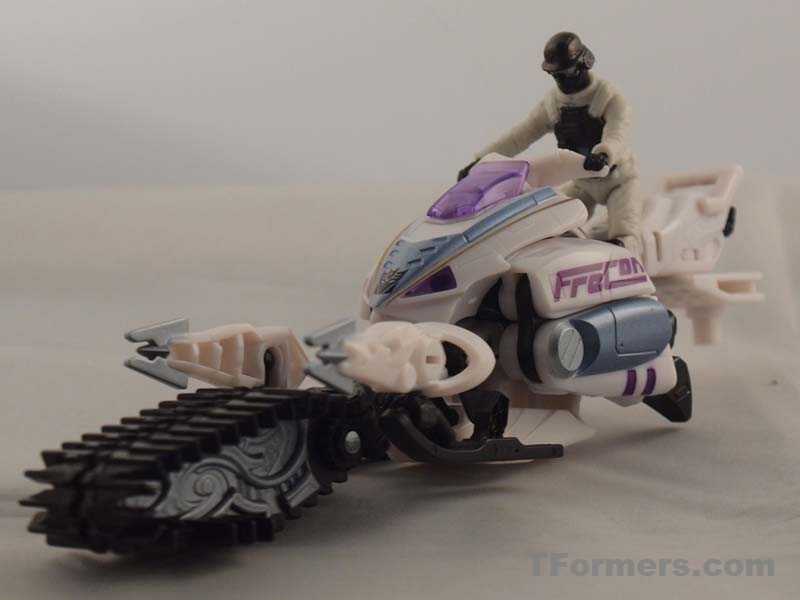 All I can say is one question.... Why? Is Icepick going bear hunting? With no rear tread, there's no propulsion. The weapons mode here makes absolutely no sense to me at all other than trying to bag game by being very still and camoflaguing.

First off, he's not a true triple changer, as I can't count that ridiculous weapons mode as a real mode. Therefore, he's a basic scout with a non-descript human ally. As a scout alone, he might have scored a mid-line rating. However, throwing $2 on the price for a human no one will really care about gives it a harsher penalty. Here is yet another scout you can pass up on without feeling like you missed something.