Previously, we looked at Topspin, the first of the three Wreckers released to market. Next up is Roadbuster, who decided to stay in his earthen alt mode instead of expose his brute mode.

Roadbuster might be a little rough around the edges, but he's got it where it counts. For as long as any of them can remember, he and his partners have specialized in traveling the galaxy, kicking Decepticon tailpipe and taking names. To them, Earth is just another battleground. 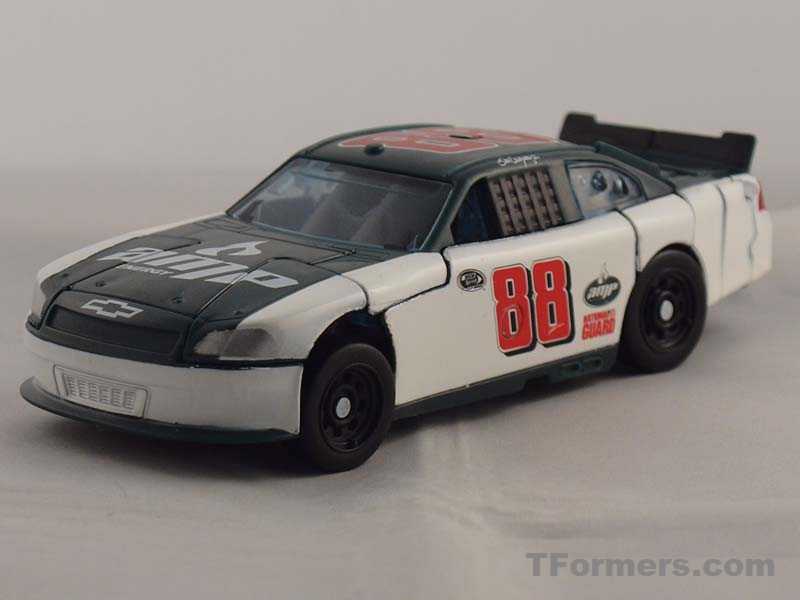 Roadbuster's alt mode is a Chevrolet Impala in track form. He resembles Dale Earnhardt Jr's #88 Amp NASCAR vehicle. Interestingly enough, while the basic color scheme of deep green and white is correct, the use of green is inaccurate. For instance, the decklid is white on the real car, while being green here. Many of the sponsorship details that were on the pre-production figure are also notedly missing. 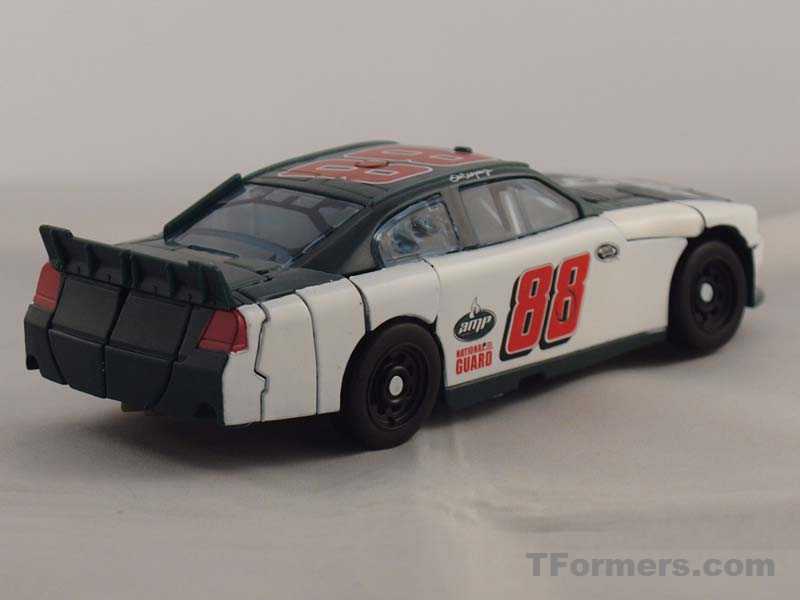 The main gimmick here is the MechTech weapon, which plugs into his roof. You can also plug the gun into the port on either of his doors. For now, we won't worry about pulling the trigger back on the weapon as it's pointless in alt mode. One gripe about the alt mode are the multitude of seams on the rear end. It draws too much attention to the already long overhang on the back.

He isn't overly difficult to transform, but the hood might get in your way a couple of times during the process. Also, positioning the rear decklid/shoulder launchers can be a tad annoying. Don't forget to expose the winglet on the launchers. 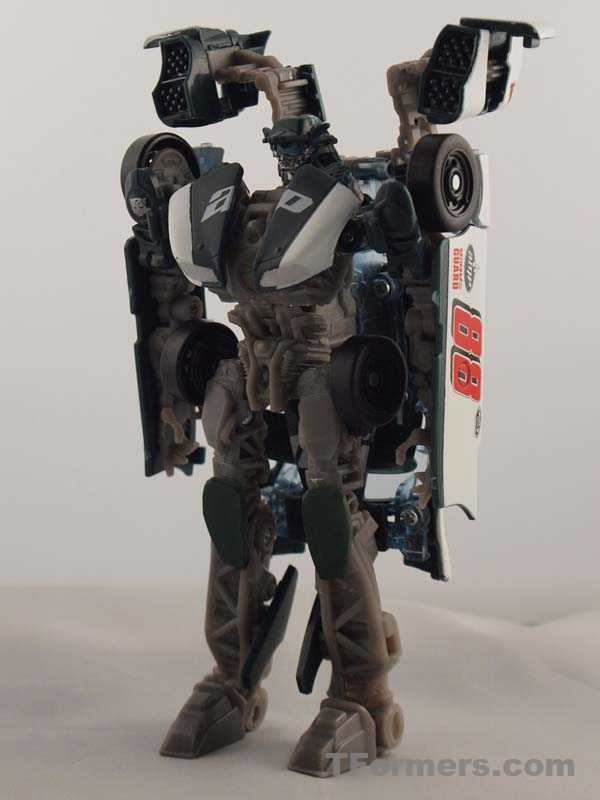 Roadbuster is rather bland in robot mode. Outside of a couple of panels, most of the robot mode is unpainted PVC. That's quite a shame, as a lot of the body and limbs sport some intricate detailing. One body part that is very annoying are the upper arm clips. The left on in particular does not like to stay on for anything. At least the head sculpt is interesting to look at and features blue piping. 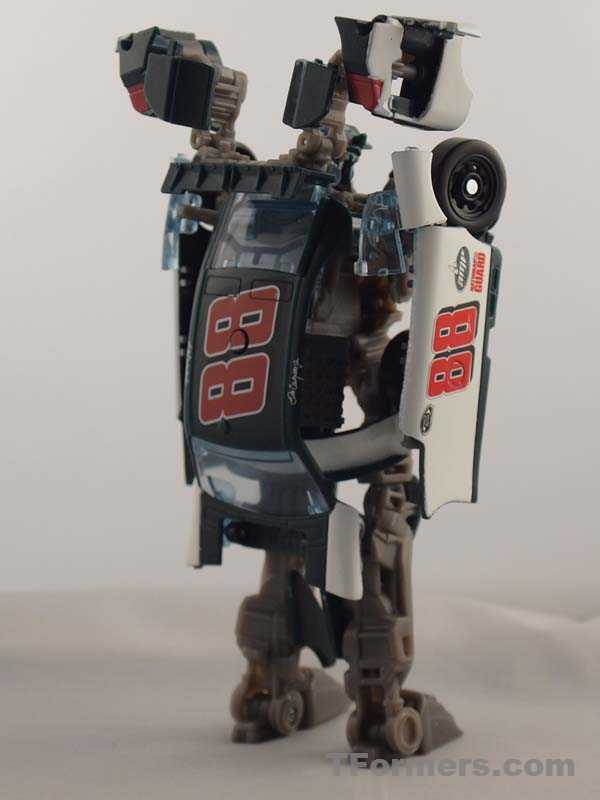 The MechTech weapon pegs (rather loosely) to either of his open hands. It's better just to bolt it to the forearm. Pulling back on the trigger will fold out a chainsaw. Like the other Deluxe weapons, it won't stay deployed. It's a nice gimmick, though, and allows for close combat. 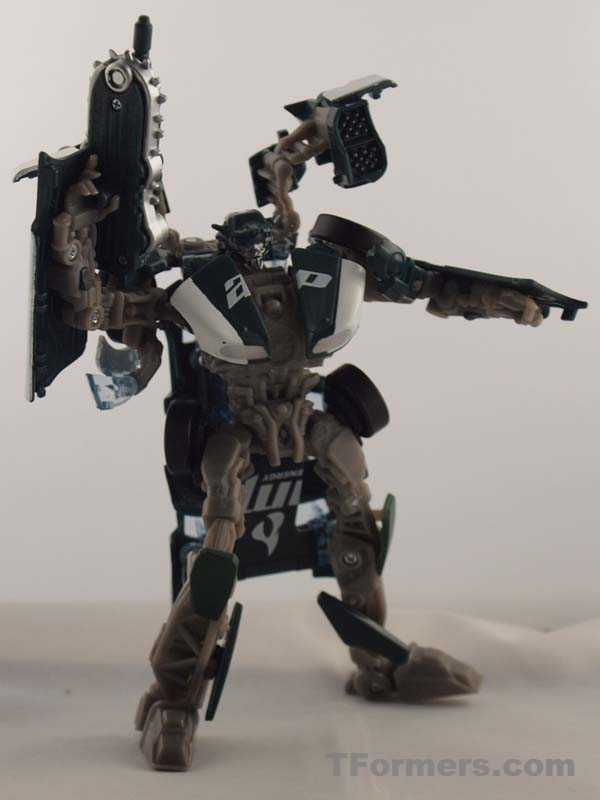 
Due to the back and hip kibble, the legs have joint restrictions.

In the most basic sense, Roadbuster is a nice package. However, when you start judging the details the interest wanes off a bit. The upper arm clips are definitely a candidate to be lost over time. The head sits on a rather small ball joint, and popped off on at least one occasion. Score another demerit for durability. Finally, I question how long the white paint will stay unscratched.

I have to say I'm let down by Roadbuster. The details and chemistry are there, but the execution feels half-hearted. Were the robot mode adorned with more color detailing, that would account for something. While he's still worth considering for your collection, just know there are small issues abound.