We've had a couple of Starscreams thrown at us using the Voyager mold. They were less than ideal, especially in robot form. Each mold had it's share of problems. So when a Deluxe version was announced, people were naturally skeptical how they could make the figure work on a smaller scale. This review dives into the Deluxe mold and finds out if smaller does in fact equal better.

Though he is an incredibly skilled fighter, the real secret to success for Starscream is never fight fair. He's always sure to bring a bigger, more powerful weapon to battle than his opponent, and he never takes on someone he's not sure he can handle. 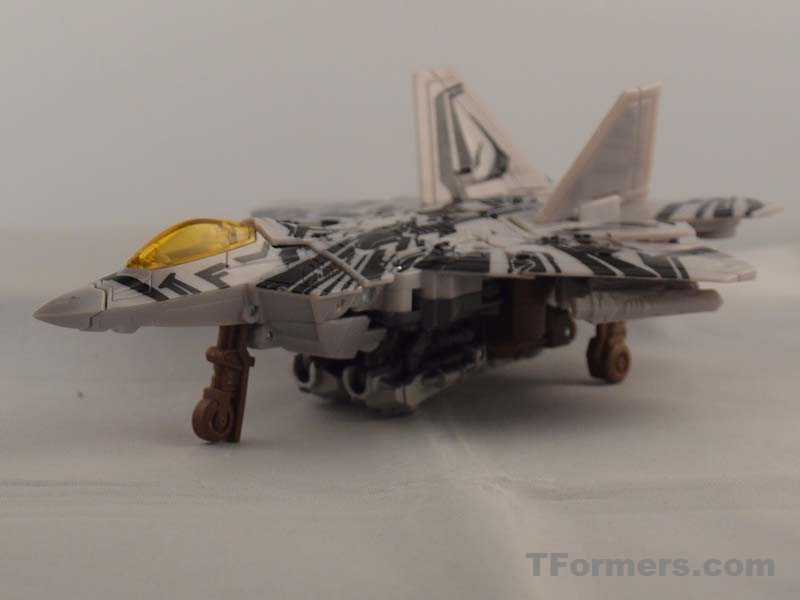 Starscream retains the F22 Raptor fighter jet alt mode, as well as his Cybertronian tattoo work. Topside, the jet is very clean and faithful to the real jet. Although not as tidy underneath, you can tell strides were taken to make it as uncluttered as possible. For a deluxe, they did a fair job. 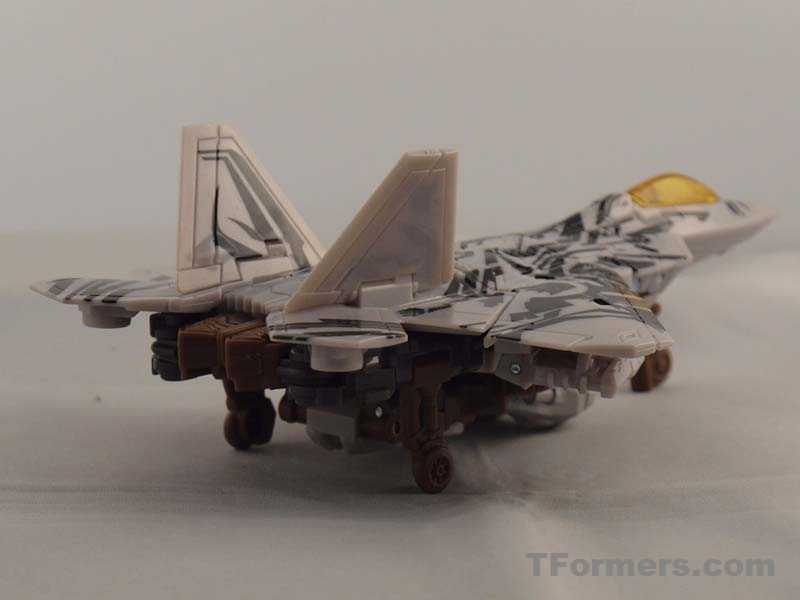 There is a 3pt landing gear on the jet, complete with molded wheels. The nose wheel tucks nicely under the nose, while the fuselage wheels fold up against the fuselage. The null ray cannons mount under the wings. One cannon features the MechTech weapon, which can swing out to expose a blade. If you want to use this blade in alt mode, make sure you mount it on the left wing. You will have to remove the MechTech weapon to lower or raise the landing gear.

Transformation is somewhat complex but not overly difficult. The fuselage is about the hardest part, but it's mainly making sure you extend all the pieces in the right spots. 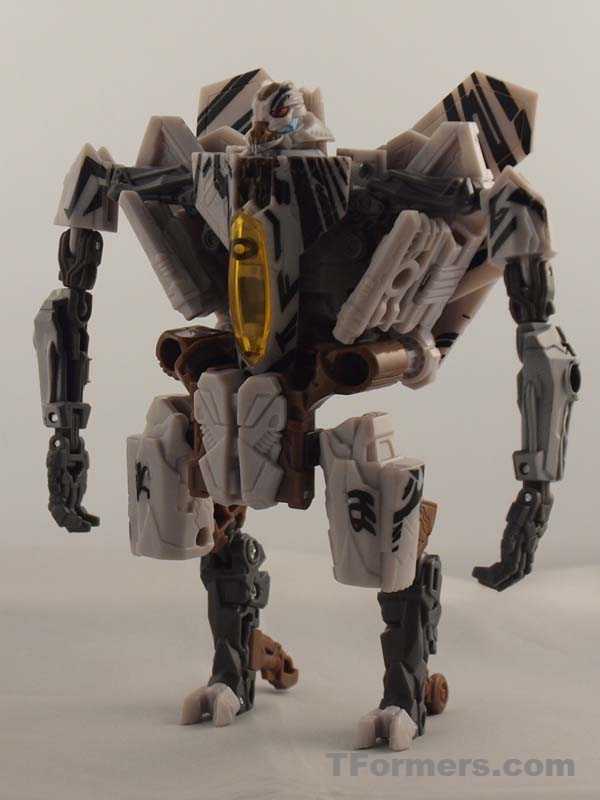 It amazes me how a Deluxe class figure could be such an improvement over a Voyager. Whereas the 2 Voyager molds have had some sort of glaring flaw in robot mode, the Deluxe is very palatable. Everything flows together with minimal gaps being noticeable. The head sculpt is pretty nice, even if the eyes are a bit small and not piped. 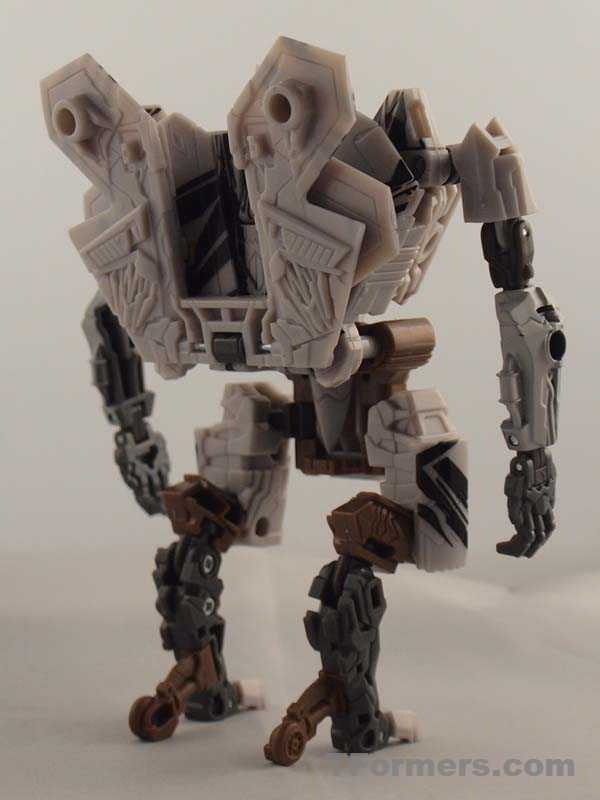 The null cannons bolt to both forearms via a peg. You can either make use of those, or flip the left cannon around to have a blade on the left arm. Trying to use the MechTech weapon on the right arm can be somewhat cumbersome, especially if trying to activate it while on the arm. Fortunately, there's a better use. By clipping the non-transformable weapon into the MechTech weapon, you can create a two ended sword. Since Starscream's hands are molded and flat, your only option for any of the weapons are the forearm ports. 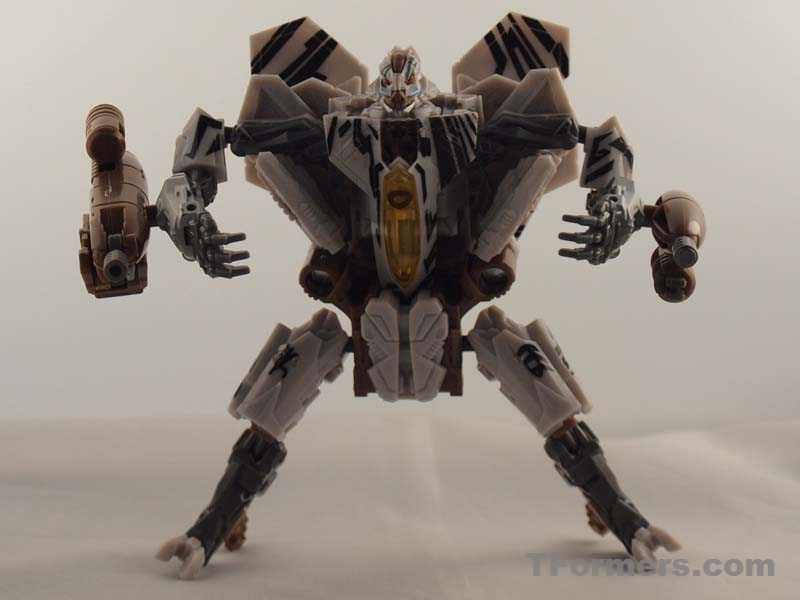 
While the knees and feet have restrictions, the remainder of the joints are set up nicely.

Robot Mode Summary:Smaller can be better at times.

While it's hard to beat the leader class figure, it's not as hard to beat out the 2 voyager figures. This deluxe mold has the voyagers beaten hands down in robot mode. The alt mode is also pretty well executed. There are some weak spots, however. The forearms can pop off the joint, although not easily. Same for the legs at the hip joint. Other than those two areas, Starscream seems well built.

If you add this figure to your collection, you can forget about your Voyagers. Even though the mold is smaller, it excels in both modes in comparison. This is definitely an instance where you won't regret throwing down $12 for a smaller figure.