Jolt - Dark of the Moon - Figure

Jolt only got a blip of screen time in the last movie, but had 2 versions in toy form. Both version featured a robot mode that was short on style but big on articulation. As with other established characters, Jolt gets a remold. Maybe this time around they'll kick the looks up a notch.

Jolt does not know the meaning of the word "calm". His body pulses with more energy than an Energon reactor in a Cybertronian summer. The high ranking Autobots have attempted to teach Jolt patience and restraint, but he has yet to learn. Loyal to the end, Jolt fights on the front line of any skirmish with the Decepticons. 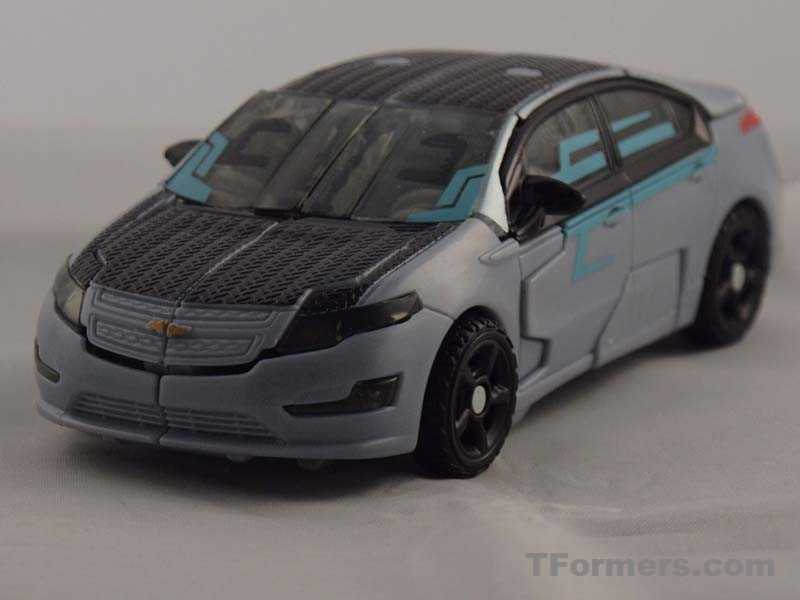 While Jolt keeps his Chevrolet Volt alt mode, the subtleties are definitely out. He now sports a gray paint job with various turquoise accents on the doors, windoes and windshield. The hood and roof are decked out with a black carbon fiber look as well. The trunklid is blacked out. If this was an attempt to 'bling out' a hybrid, it's bad comedy. 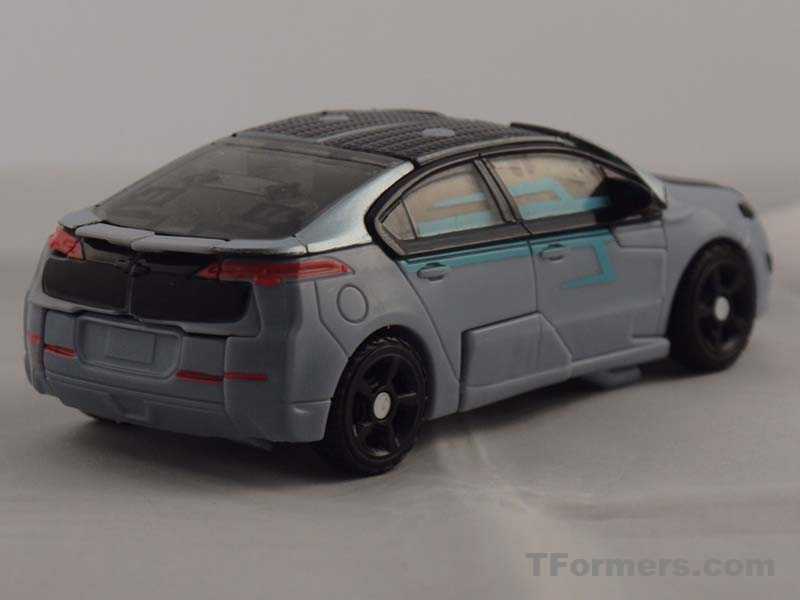 You will find 2 plug ins on the roof to mount the MechTech weapon. Normally a rifle, you can push the top trigger back to unfold a larger caliber rifle. Overall, a decent alt mode but I surely hope they tone down the repaint to be a bit more respectable.

Alt Mode Summary: This must be what a pig looks like after Mary Kay experiments.

Transformation can be a kick in the shorts. There are various small tabs you have to pull out to complete the process. Tabs that don't always want to pull out. The feet and torso conversions in particular are aggravating. 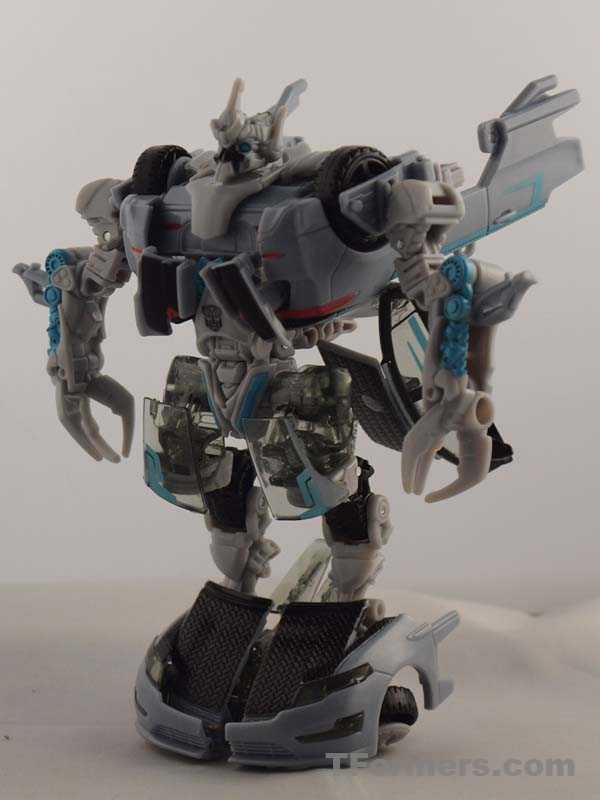 The first Jolt mold might not have been very pretty to look at, but it'll win beauty contests before this mold does. Though the color coordination is pretty nice, the aesthetics are horrendous. The door of the alt mode stick out the back like a sore thumb. The claw arms are also ungainly. The only thing that wasn't radically re-engineered was the head sculpt. 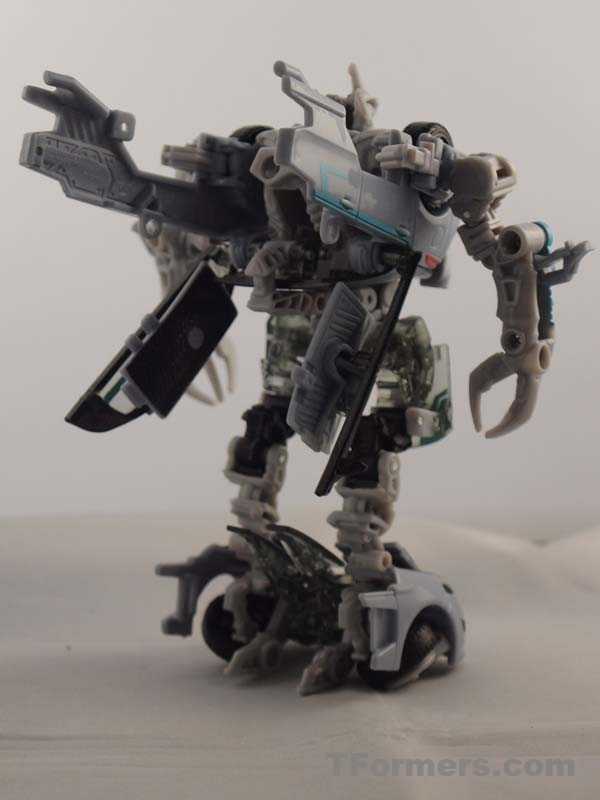 Fortunately, there is a peg hole on each forearm where you can plug the MechTech weapon into. You might even be a bit surprised, just like the previous mold, on the points of articulation this figure possesses. 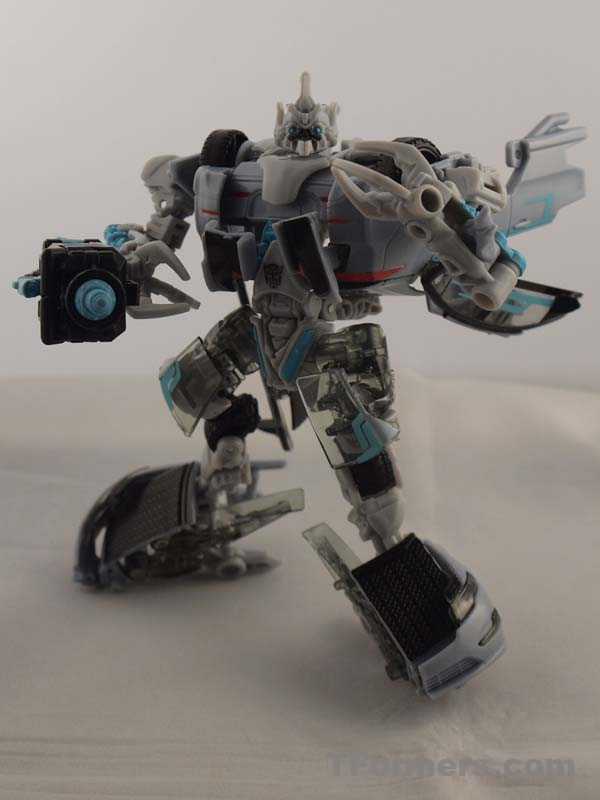 
At first glance, the elbows seem static. However, with the dual pins used on the elbows, you can get a variety of different poses from them. It's all in how you rotate the forearm using the pins.

Robot Mode Summary:About as strange as the first mode, and surprisingly poseable too.

One quirk I found with this figure is the arms don't seem to stay connected very well. On a few occasions, the shoulder and upper arm assemblies came apart. That doesn't bode well for durability. I can also see the door panels stressing over time. The transformation isn't very fluid on this figure, which might put some people off. And both modes have a 'love it or hate it' look to them.

While the first Jolt mode may have had it's various faults, it was a decent figure to look at in both modes. This time around, Jolt is cosmetically flawed with a "what were they thinking?" alt mode treatment. The robot mode might also leave some people scratching their heads. But like the first mold, it has it where it counts... and that's in poseability. I suppose that's what makes Jolt so quirky. You love to hate him... or hate to love him.