Optimus Prime finally gets a mini-me after 4yrs of the movieverse being on the market. For those on the hunt, Walmart will have your fix of the Deluxe class mold. Some might ask what good a Deluxe might do them since there's already a Voyager mold out. As this review progresses, we'll compare the Voyager to the Deluxe and see if David trumps Goliath.

Optimus Prime, the leader of the Autobots, earned the right to be called a Prime by virtue of his courage, intelligence and skill in battle. But the discovery of the long-missing Sentinel Prime means he may have to share his role as commander. The Decepticons don't stand a chance with these two mighty Auotbots fighting side by side! 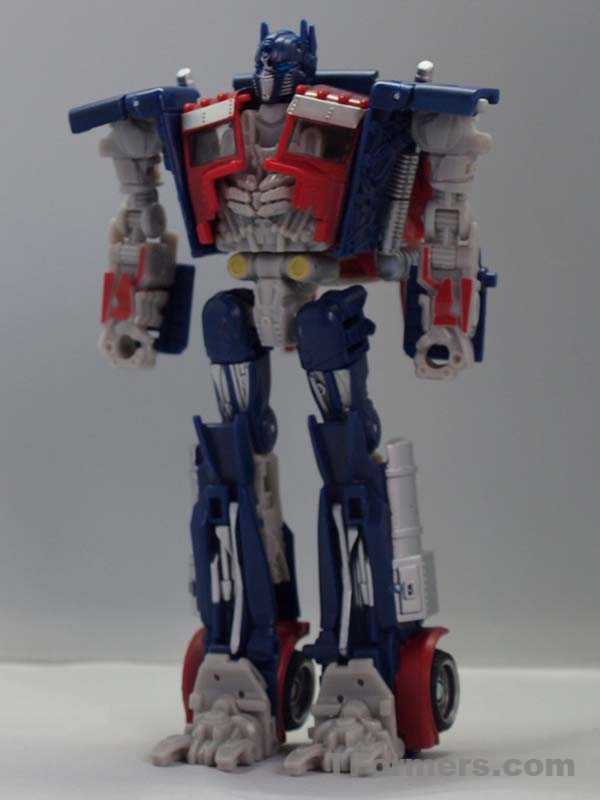 Perhaps it's due to the fact that they're trying to keep pricing down, but this Prime is yet another example of how the paint apps are lacking. The torso and forearms especially are devoid of coloration. However, this Prime is better proportioned than the Voyager mold. To wit: Although the Deluxe is 1-1/8" shorter than the Voyager mold, the body from the waist to the neck are exactly the same for both molds. The Deluxe also has the benefit of blue eye piping, versus the Voyager's clear piping. One put-off is the backpack, which is basically his cab nose flipped back. It stays in place on it's own pretty well despite not being pegged. 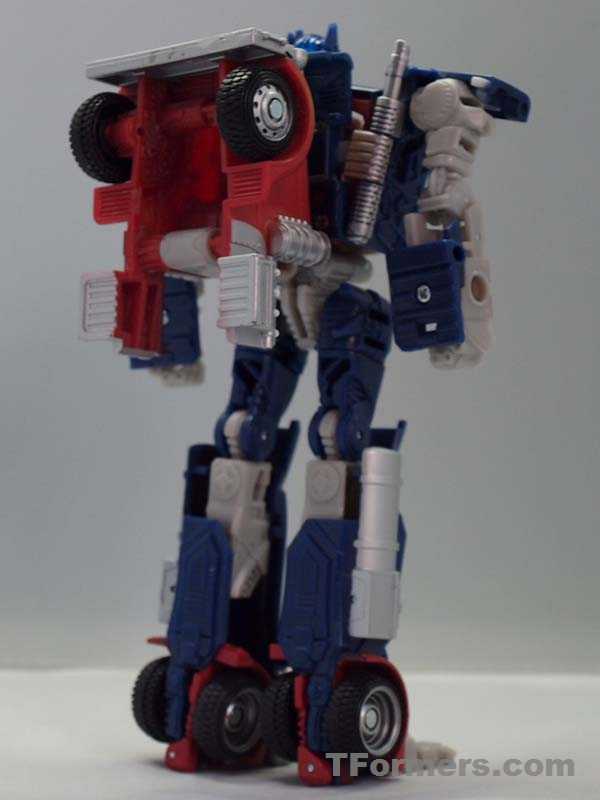 Optimus' weapon for this mold is a rather bland looking MechTech blaster. Pushing back on the sight will flip out an orange energon axe. It has potential for nice chopping action... except the blade is facing the wrong way. It ends up being more of a face smack than a chop. The axe blades might need help retracting into the weapon upon releasing the sight. 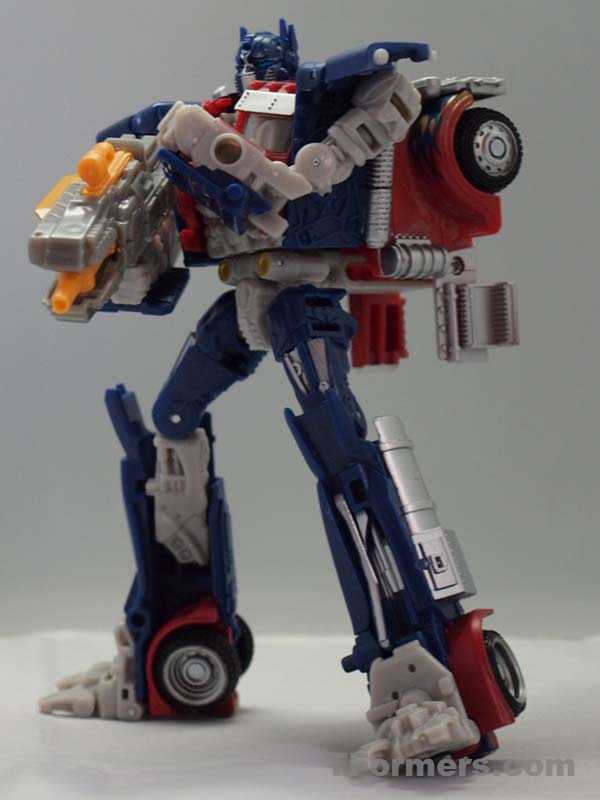 While not overly difficult, there are a lot of different pegs and tabs you have to lock into place. Special attention should be paid to where the legs lock into the bulkhead of the cab. If you don't have the arms pegged together right, you won't be able to lock the legs in. 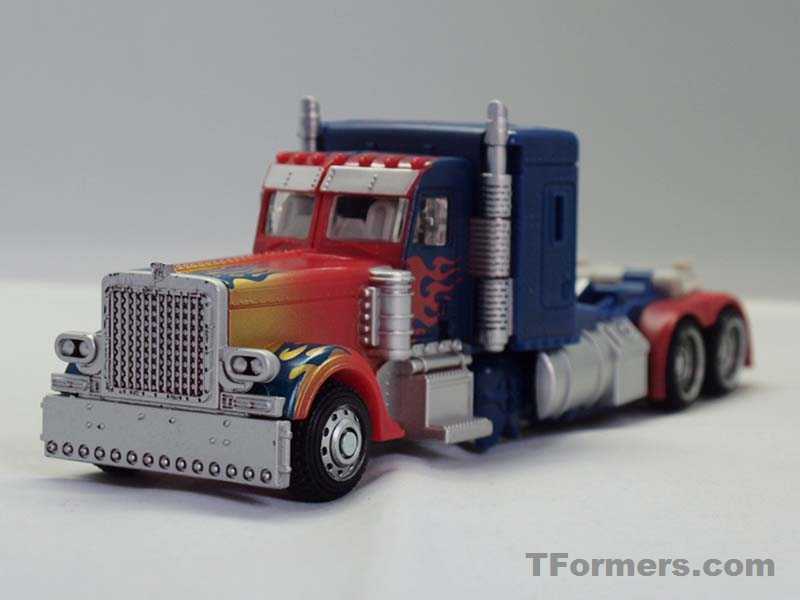 In alt mode, this Prime definitely outshines the Voyager mold. Not only are the proportions more accurate to the real deal, all the panels are virtually gap-free. There is also none of the "solar panel" applique that marred the Voyager mold. 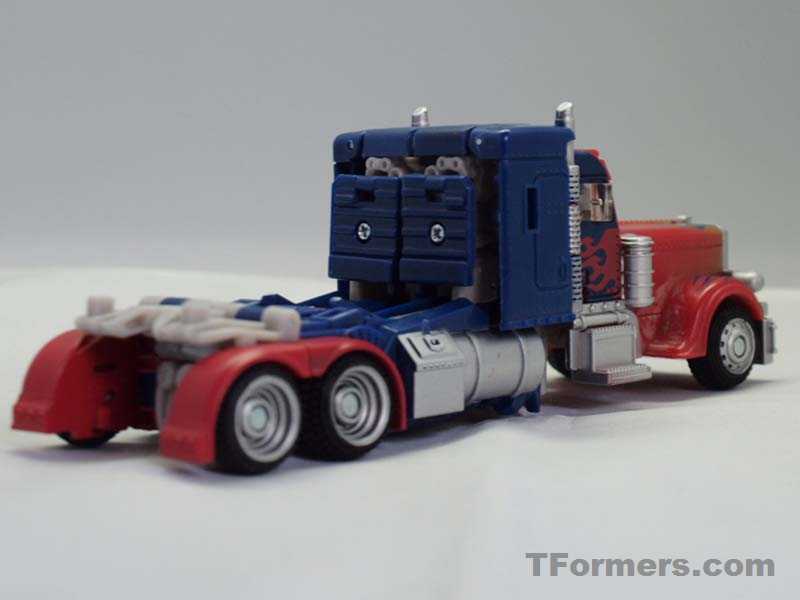 Even the detailing over the Voyager mold is superior. The flame job is more prominent, you can actually see riveting on the hood and the brightwork is actually painted in silver. This is in stark contrast to the robot mode, which left a lot of body parts unpainted. The MechTech weapon can peg to either side of the roof. However, there is no way to peg it to the 5th wheel.

Alt Mode Summary:Smaller than the Voyager, but so much better.

Compared to the Voyager mold, this mold is a veritable steal at $11.99 retail. Since this is a Walmart exclusive, you likely will score this figure for $9.88. Half the price of a Voyager with a much more accurate appeal. It's almost a no-brainer.

Although the robot mode lacks some details, the vechile mode absolutely shines and makes the Voyager mold seem almost embarrasing. Again, customizers will be able to bring out the detail and turn this figure into a must have. Even with the missing paint apps, this Prime should be high on your list.