It always seems that Hasbro discontinues a line right when the selection gets good. Take Lugnut, for example. He was to be part of the first and only Voyager class wave to hit the Reveal the Shield subline. Unfortuantely for him, that release came a bit too close to Dark of the Moon. You can go on the hunt through various clearance chains such as TJ Maxx or Marshalls to find him, but is he worth the exercise?

None too bright, but fanatically loyal to Megatron, Lugnut lives to see the Decepticons victorious. He literally is a force of nature on the battlefield - gravity generators in his fists spawn point singularities on impact, causing massive explosions with each punch. That, combined with his seemingly limitless supply of missiles, makes him a chaotic and deadly opponent - one that most Autobots avoid at all costs. 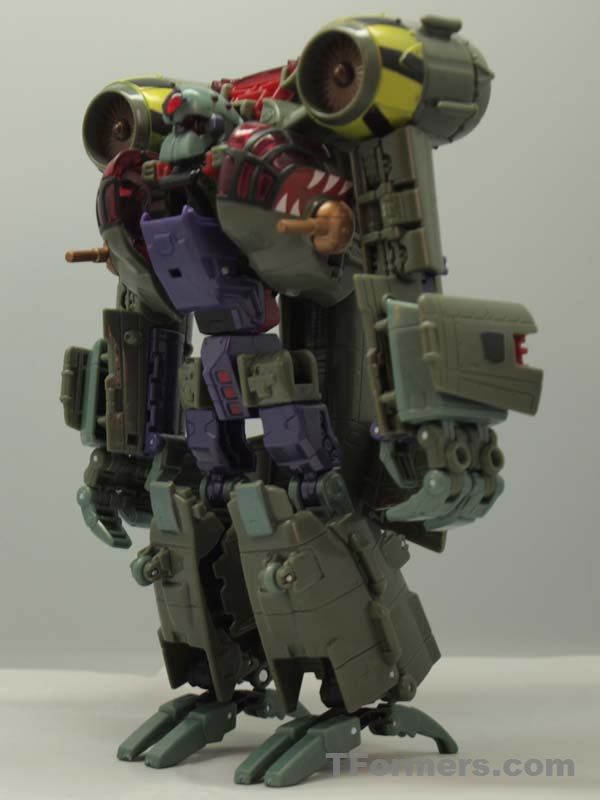 While instantly recognizable as Lugnut from Animated, there's actually quite a bit of change. For one, the paint job is less subdued, trading in the purple for a greenish gray look. That's not to say you can't find purple, which is on the chest. His alt mode engines form the shoulders, and he now has more usable claws with each finger being jointed. The head is piped for his big red eye. For a bonus, his mouth can also move. 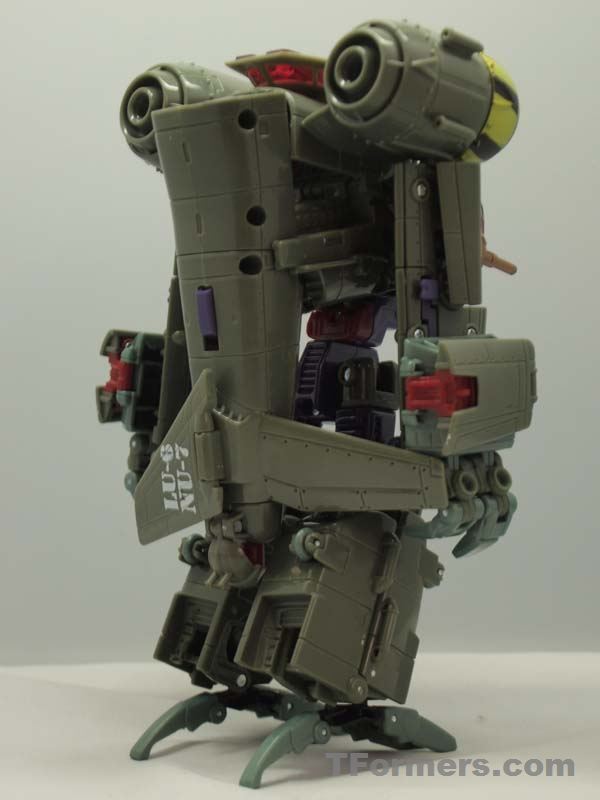 Although this tail section is not removeable, it does house a weapon. By pulling it out and twisting it around, you can unveil a laucher complete with launchable missile. Should you want a little fisticuffs, levers on either side of his arms (just above the elbows) can provide you with a spring loaded punch. You can also utilize his chest, which has a cannon on either side. Sadly, there is no hand weapon. 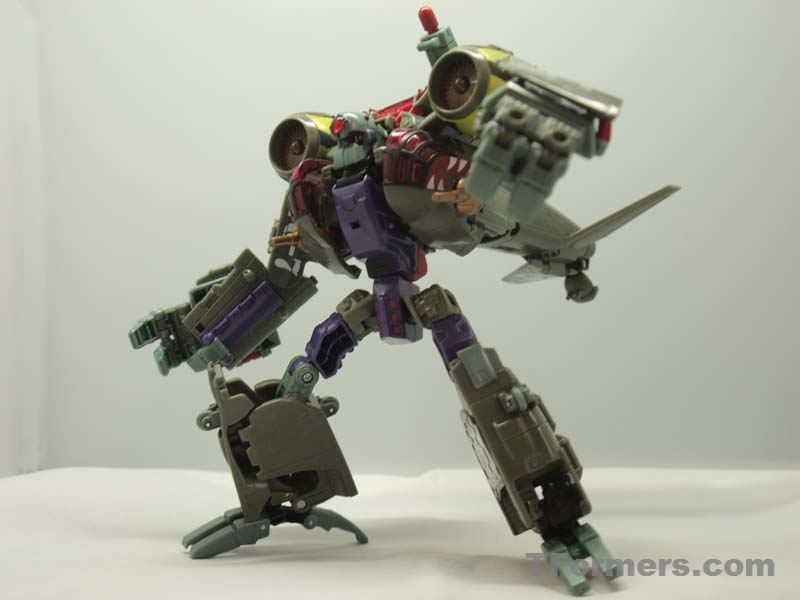 
The only fault is the shoudlers, which won't allow for a 'hands up' pose.

Transformation is somewhat complex. The legs in particular might confuse some as to exactly where they need to be twisted. 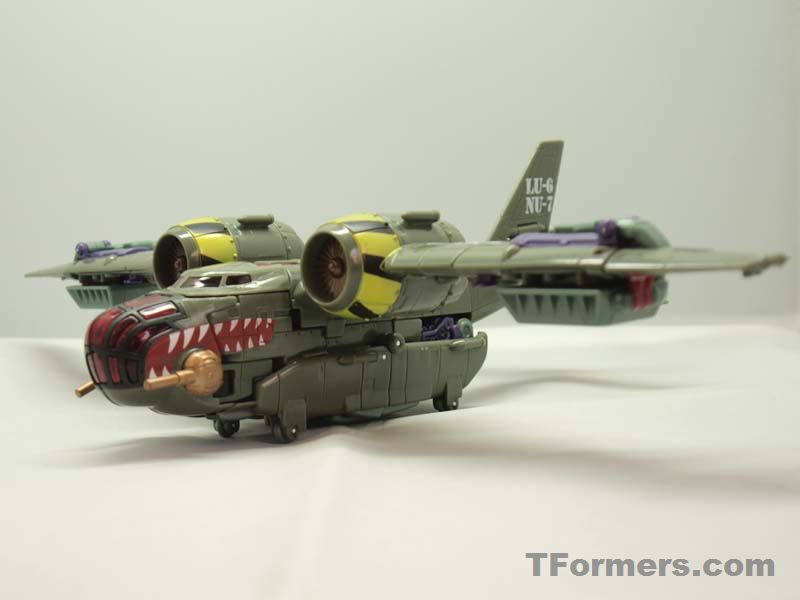 Lugnut trades his futuristic Animated look for a hybrid vintage look. While there are several styling elements that are reminiscent of a B-17 Flying Fortress, the overall design is more modern, including the angled fuselage design and the curved rear stabilizers. the 'shark's mouth' art on the nose is a throwback to WWII fighter planes. On the fuselage, you will find LU-6 and NU-7 in military script. This loosely spells out Lugnut. His thermal rubsign is on the top of the left wing. 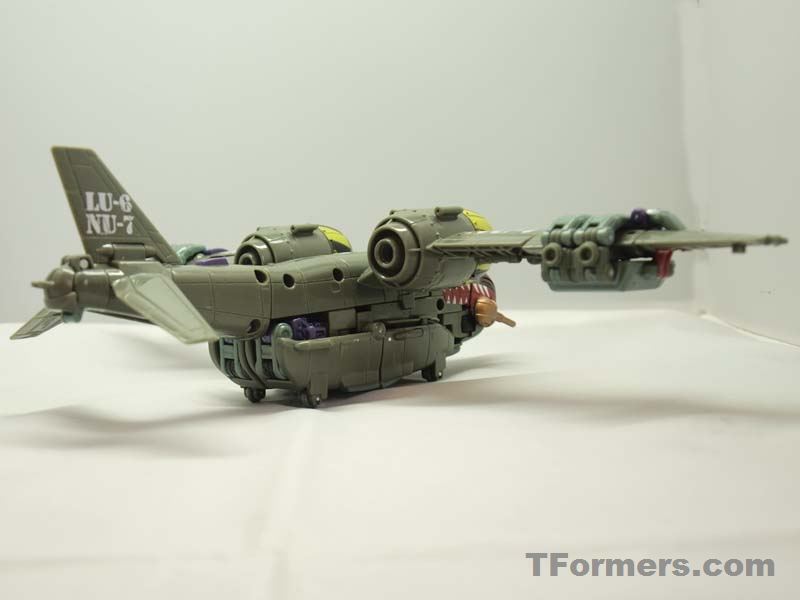 There is no retractabe landing gear here. Instead, you have 4 molded wheels on the belly. From a 3/4 rear perspective, the plane looks rather odd as the folded up legs don't sit flush with the aft section. Some might also take exception to how the fingers fold up against the tips of the wings. However, it doesn't look terribly out of place. Like Animated, Lugnut's tail section houses the launchable missile and it can be fired for a rear attack.

Assuming you can find Lugnut, the value will be on where he's found. The best source seems to be TJ Maxx, where he is a relative steal at $9.99. Should you manage to find him at retail for $19.99, he is still a good bargain. Besides the missile that can be lost, care should be taken on the spring loaded arms which may loosen over time. The cannons on the nose are molded rubber and may deteriorate if not stored properly.

It's a pity that Lugnut never made it out en masse to stores. He is a superior mold to the Animated version and can easily feel at home in the DOTM lineup as well. While he's not perfect by any means, he's definitely worth popping into a discount retailer or two to find.