Darksteel - Dark of the Moon - Figure

It seems like when a Beast War tribute is announced for a TF line, it creates all kinds of hype. DOTM gives us it's first Beast Wars tribute with Darksteel, which is said to be a tribute of Quickstrike. Just how good of a tribute is it?

Darksteel is a traditionalist. As a student of the most respected Decepticon warrior on Cybertron, he learned there is no substitute for a razor-sharp blade and clever mind. Blasters and cannons get the job done, but may fail in the heat of battle. The blade never falters! 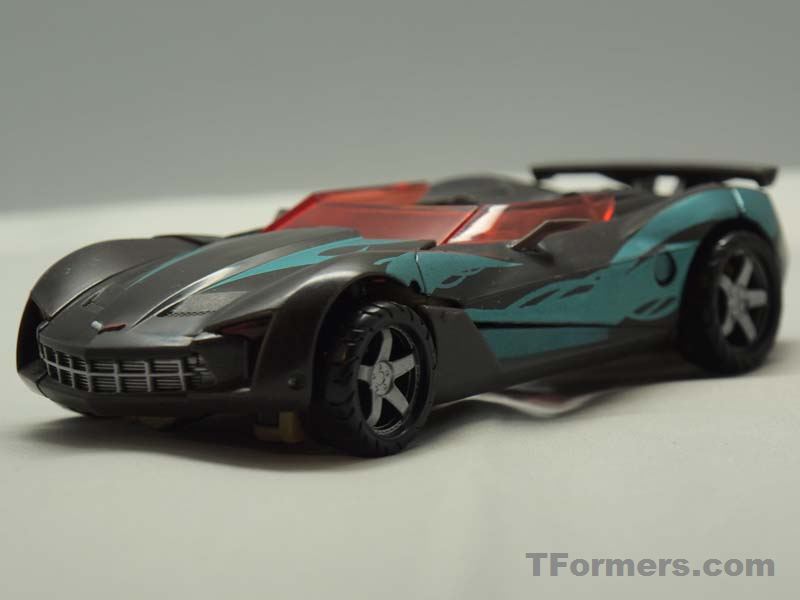 Darksteel borrows Sideswipe's Stingray Spyder alt mode and splashes it up a bit. The paint job is a dark bronze with turquoise appliques on the sides and hood. The wraparound windscreen is a translucent red. It seems pretty gaudy at first, but it's warming up to me little by little. 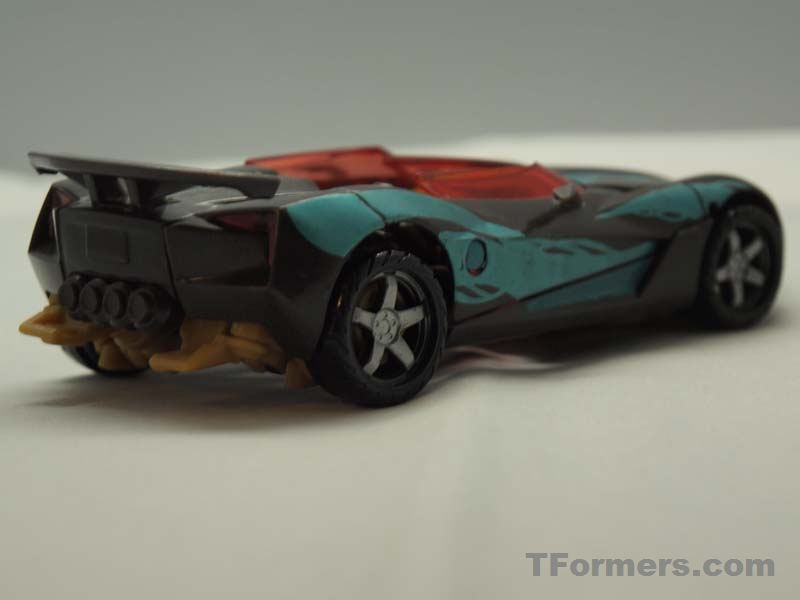 Darksteel uses Starscream's MechTech weapons. They can mount on either door. You can also opt to mount the blaster weapon on the peg next to the spoiler for added effect. If you really want to go crazy, you can combine the MechTech swords and mount it for the ultimate melee weapon. Talk about sharp donuts!

Alt Mode Summary: A color scheme you need to get used to, but with good possibilities for the weapons. 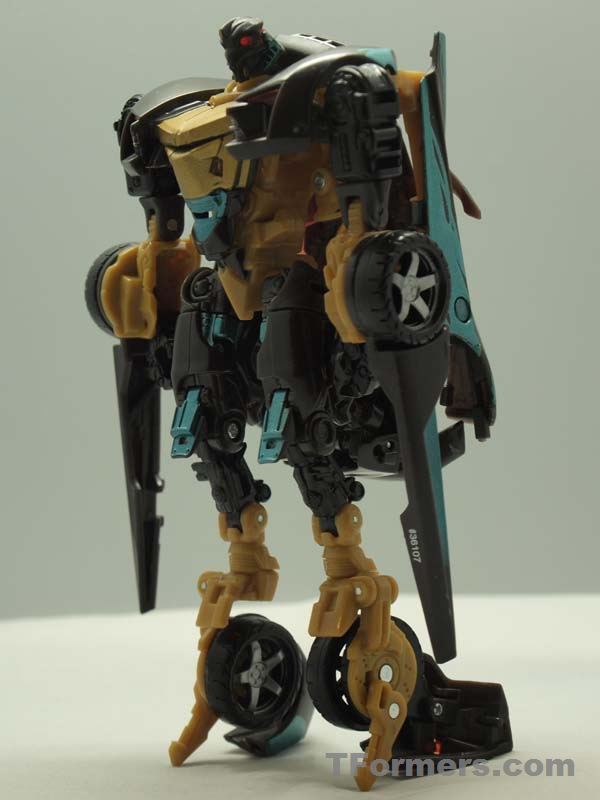 It has been said that Darksteel is a tribute to Beast Wars Quickstrike. Outside the general color scheme, I just can't see it. Sure, the mixture of dark bronze, turquoise and mustard yellow seem to match up to the desert stalker, but the head sculpt (while being a new mold) reminds me more of a demented walrus than of Quickstrike. Said scult does offer red piping. 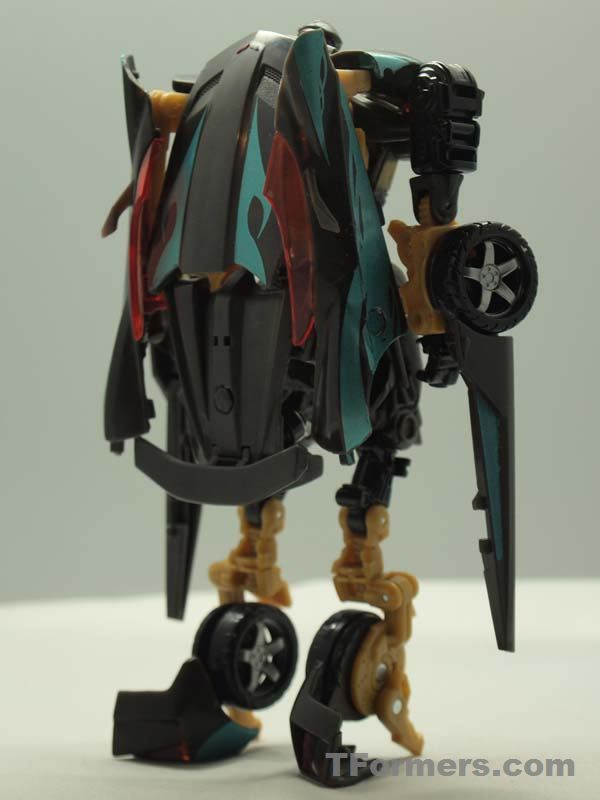 Using Starscream's MechTech weapon might make him match his bio, but the combined mode wasn't meant for this mold. It's impossible to keep the staff mode of the weapon pegged in his upper hand, and it's not very tight if pegged under his hand either. You'll have a similar problem when trying to use the blaster mode in his hand. On the bright side, the individual blades fit nicely. 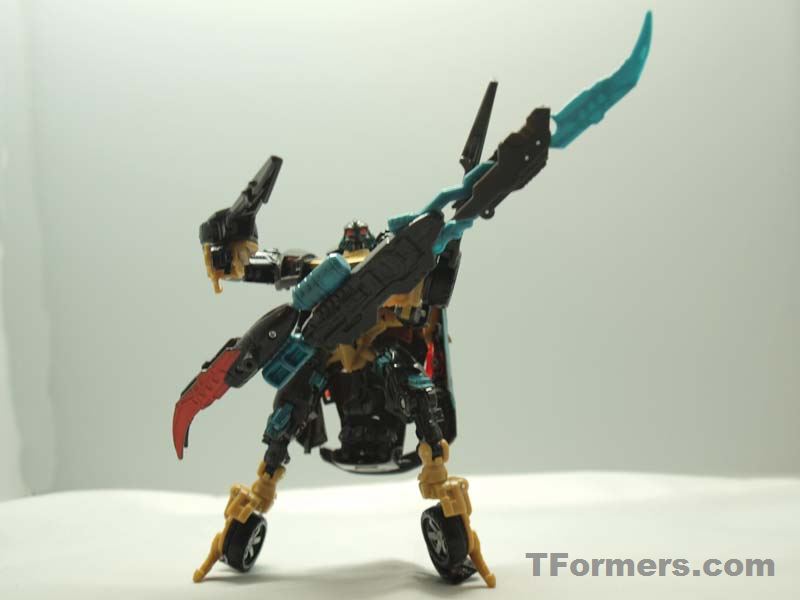 
Lower legs were a bit loose on mine. It caused the figure to 'split' if the legs were positioned at an angle. Hopefully an isolated incident

Robot Mode Summary:Sometimes pairing a figure with the right weapon makes... or in this case breaks... the difference.

Sideswipe had some seam issues in alt mode. Darksteel seems to have them even worse. I had a difficult time lining the left front fender to the door. His head sculpt pops off rather easily from his ball joint socket, and being it's so small it just makes finding it that much more difficult.

There's a lot of buzz with this one due to the supposed BW reference. While I can see a likeness to Beast Wars, I can't see this as Quickstrike. Maybe it's just me. At any rate, for those who aren't excited about a BW reference, you can keep this one on the peg. It offers no improvement on the mold and is paired with a MechTech weapon that, while great in Alt mode, lacks in robot mode.