Release Data: Released Early 2015 as part of a prepackaged Easter basket retailing for $15.99.

A knockoff of FansProject Explorer, Robot Warrior Series Airplane Model is something really special. It's not the first unauthorized reuse of a third-party mold- there've been medium-to-high quality bootlegs of those for years now, same as official Transformers. But this is a landmark in the history of Third Party in that it's the first copy of a 3P toy to make it to mass-market US retail in a Big-Lots quality knockoff.

Between you and me, I've been expecting this to happen for years now. 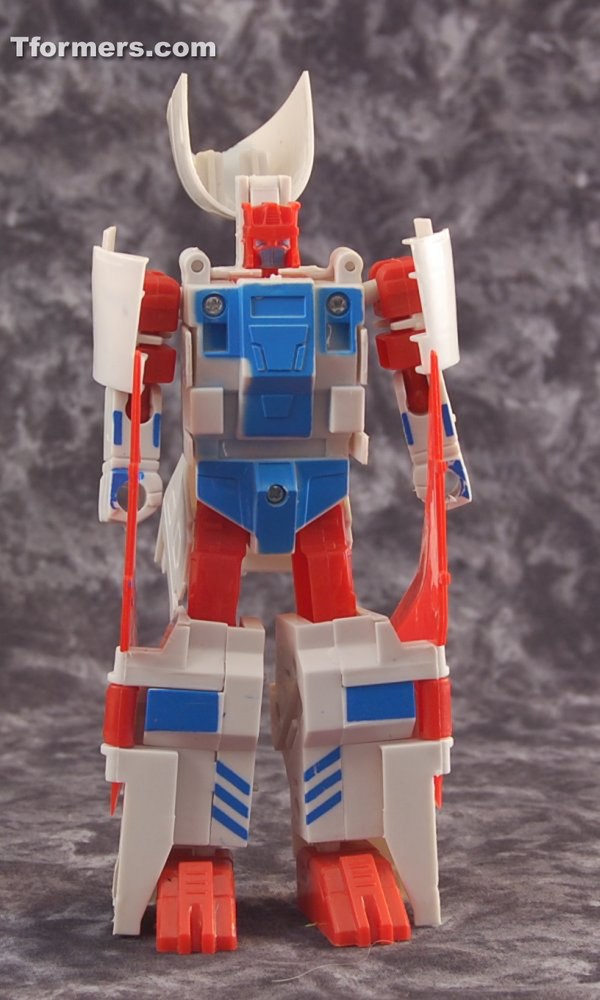 It's an oversized knockoff, just for starts. Where the original was an Omnicon-sized toy (remember those?) to go along with two of the existing Energon Combaticon limbs, this is about the same size as a Combiner Wars Deluxe in Robot Mode. In many ways it's about as complex as one, too, but that's about the only positive points of comparison you'll find with them.

Airplane Model is recognizeable as Explorer/Blast-Off, but in a more "heroic" color scheme of white and red with blue paint. The paint is sloppy in a way that'll make you more appreciative of Hasbro, with lots of overspray and surfaces that you can be pretty sure were flat-out not intended for paint. The plastic the figure is made of is super-thin and flexible, which is actually pretty wise on the part of the knockers-off because the amount of give in the plastic circumvents the issue that most KOs have historically had: brittle bits breaking badly. Blust-Aff is reasonably well put together for what he is, but still feels much lighter and more fragile than official product. The cost-cutting efforts Hasbro uses like hollowing out limbs are taken to greater extremes here, and it does give a lightness and cheapness to the whole affair that is, let's be honest, not unexpected in the least. 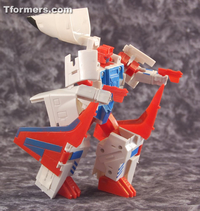 The figure's also been simplified considerably, just to expand on the theme of cheapness. None of the aircraft kibble folds up to where it's unobtrusive or even out of the way, just hanging off of the back being shuttle chunks. The most amusing simplification is the wings of the shuttle. Where the tapered parts of the wings were on ball-joints on Explorer, becoming sort of cool-looking lapels for the robot, here they stay on the wings on the legs. Given the streamlined design of Explorer/Airplane Model's alt-mode, this means there are giant points always sticking up into the figure's armpits. Man, that looks uncomfortable.

And that brings us to the last example of the figure's overwhelming cheapitude: sharp edges. It is covered with them. The wings are only mildly pointy at the tops, but the rear edges are frighteningly sharp. So are the edges of the nose section, the edges of the legs, of the arm kibble. The sword is, fortunately, less sharp much like the upper edges of the wings. But honestly: do not give this toy to a child. Especially not as young as 3 Ages, which is the minimum suggested on the package. Realistically, this shouldn't even be in a store.

Articulation is... surprisingly good, considering! You can tell that Explorer was significantly moreso, but Airplane model is not that bad, especially for what it is. There's no neck though, and the head's up on a small, fragile looking stalk. And you have to push on it to transform him. Eek. The shoulders are double-jointed for transformation but even the balljoint by itself, without the hinge, has a great range. The elbows are also ball-jointed and do pretty well. No waist, and no surprise at the lack of one. The ball-jointed hips are functionally swivels- there's barely side-to-side range at all. And the shape of the hip armor does restrict the forward range a bit. The knee hinges have a good range and are super-stiff. The feet are ball-jointed and are fairly loose, but the big chunky legs are plenty good at holding the figure up. The knockers-off at Megatoys are standing on the shoulders of a Colossus here, yes - but I've had worse official figures.

It's simple, but pretty satisfying. You push the head down into the torso (scary!), then swing the arms up, turning the kibble bits on the shoulder 180 degrees. Then you fold the nose up and peg it onto the hands. Then you fold the other bit of back kibble down to cover the thighs, swing the wings into place, and try to peg the sword into place between the knees as the tailfin. It doesn't stay very well, because the sockets were clearly designed to press up against a thicker peg. Also the legs don't stay together very tightly, which'd also help. And lastly, ignore the tabs that are supposed to attach the wings to the fuselage. They're not really needed and don't want to fit. 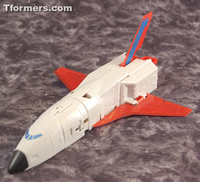 The circle is complete: whereas Explorer was an unmanned space-drone thingy, Airplane Model is pretty clearly a space shuttle, like Blast-Off was. ...well, with some odd red bits. This is not unprecedented, though Astrotrain's is more of a red-orange. No landing gears and no official way to mount the tiny pistols, though they do wedge in-between the aileron and flap on the back of each wing nicely. Also: hey, they actually molded an aileron and flap into the wing! It's also a nice big shuttle, measuring about 21cm/8.5" long. Not much else to say about it... oh, one thing! The paint on the wings is on the underside, only showing in robot mode. You might be able to swap them, but why chance it? 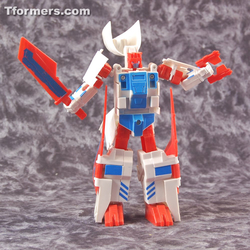 Where Explorer's weapon - a transforming sword/axe combo, or Switch Axe - became a slightly unconvincing tailfin, Airplane Model opts for a single piece sword that makes a pretty nice tailfin. He also comes with a pair of pistols that don't seem to correspond to any of the many parts that came with the original figures. All three are super-flat and super-thin, using tabs that are 6ish millimeters across to stay in the slightly-oversized hand sockets. The upside to this is that he can use all three weapons at once, pegging one gun into the top of his hand and one into the bottom. Also, the nice shoulder joints and length of the tailfin-sword's tab mean that Airplane Model can hold his finsword two-handed in a reasonably convincing pose.

Also included with the two figures were a pack of Lemonhead candy, a Fun Dip, and some milk chocolate M&Ms. Lemonhead and M&Ms are pretty well known quantities, but I'd never had Fun Dip before - I think I liked the vanilla-flavored stick better alone than with the dip.

You can't really rate this on the same terms and the same scale you would any other toy: it's a super-cheap novelty and it's really something I'd only recommend getting if you like what it stands for. That being the moment when third-party toys have come of age and joined the Transformers proper as something that certain companies will appropriate without permission and send to opportunistic retail settings like seasonal gift baskets. I'll leave it up to you to decide if that's irony, poetic justice, or a combination of both.

(If this were an iGear figure, it'd totally be poetic justice.)

As knockoff toys go, however, it would rate Good on a slightly more lenient knockoff of the Figurereviews.com Non-numeric Rating Scale. It's got sharp edges aplenty, has some limitations, and Weapons From The Second Dimension. But it works in both modes, features not-horrible poseability, and doesn't look like it's going to self-destruct anytime soon. I've definitely had worse.

And, because I feel it should be said: the fact that there are a fair number of positive qualities shining through the cheap speaks very highly of the original product, as well. 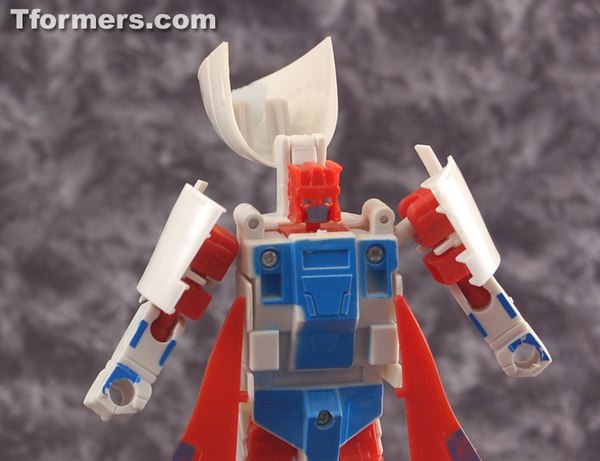 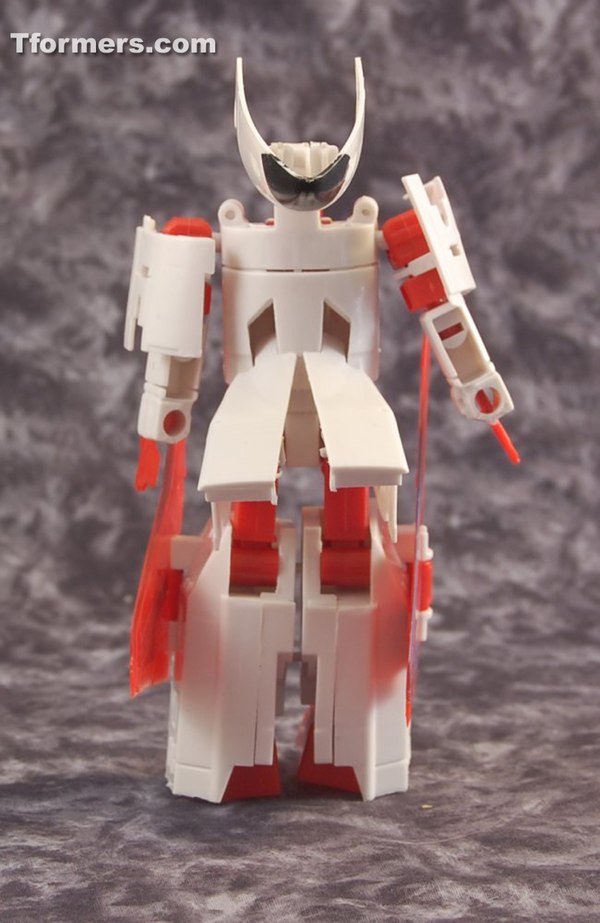 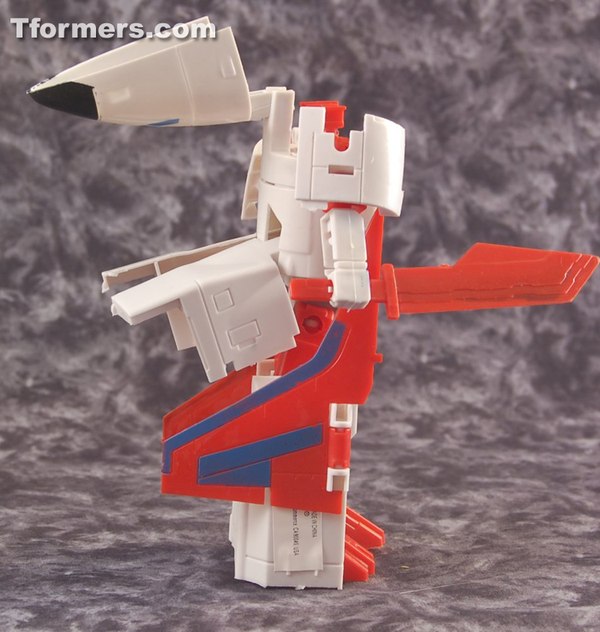 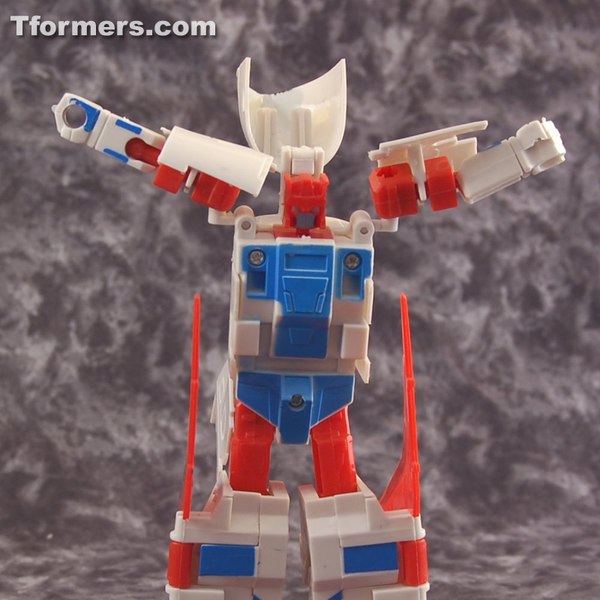 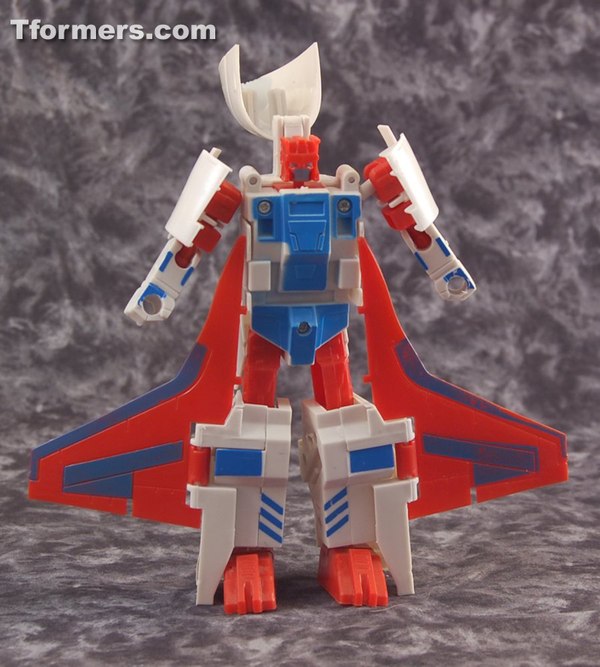 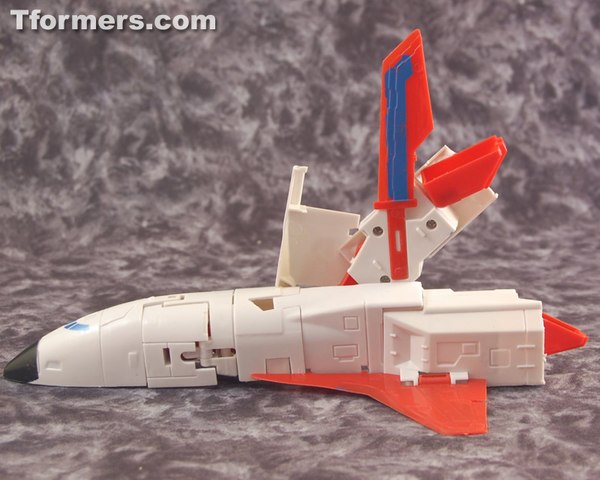 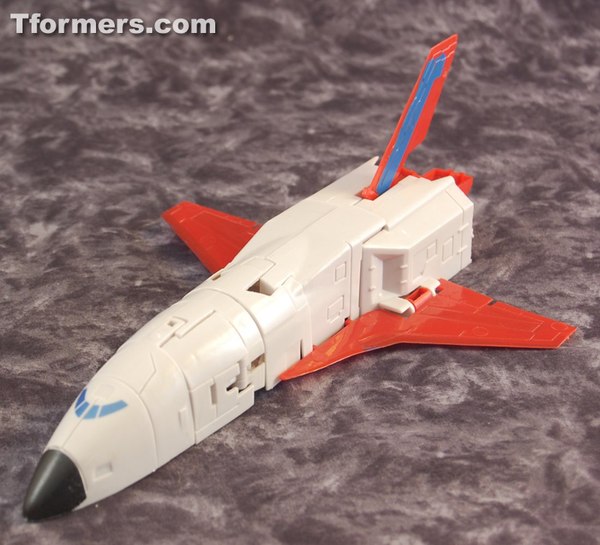 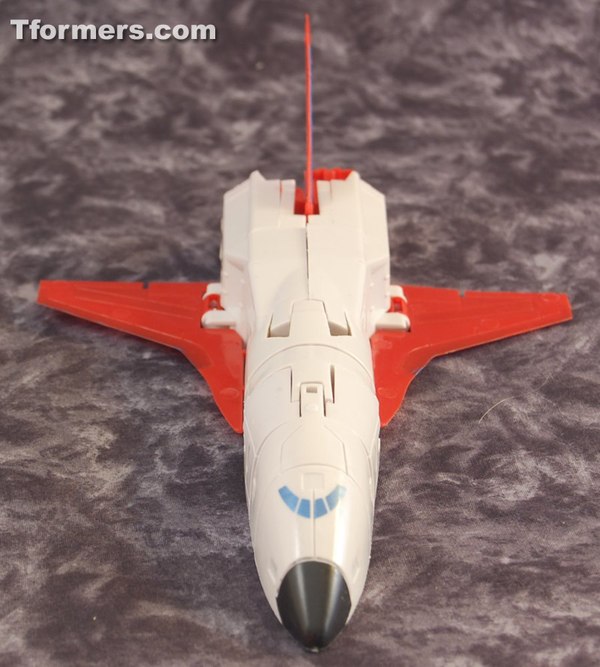 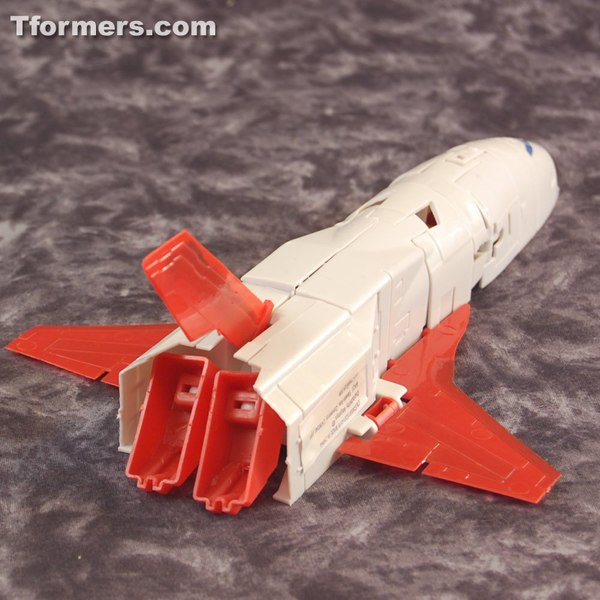 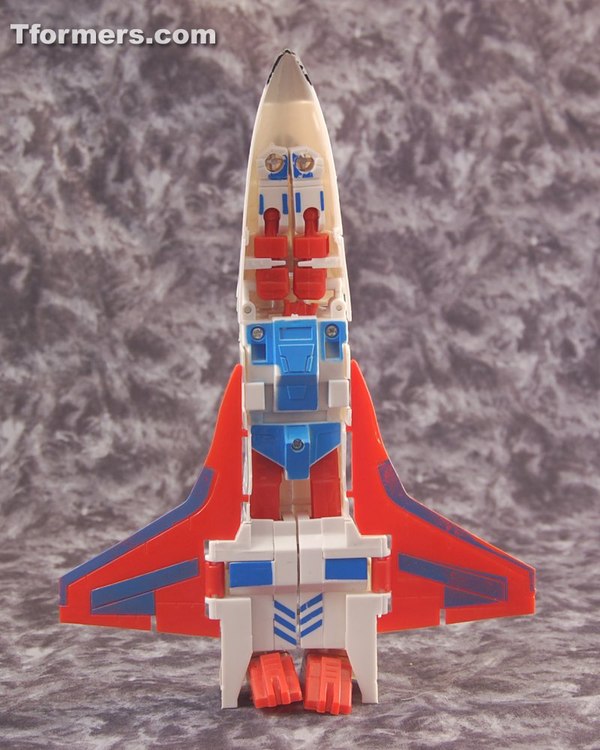 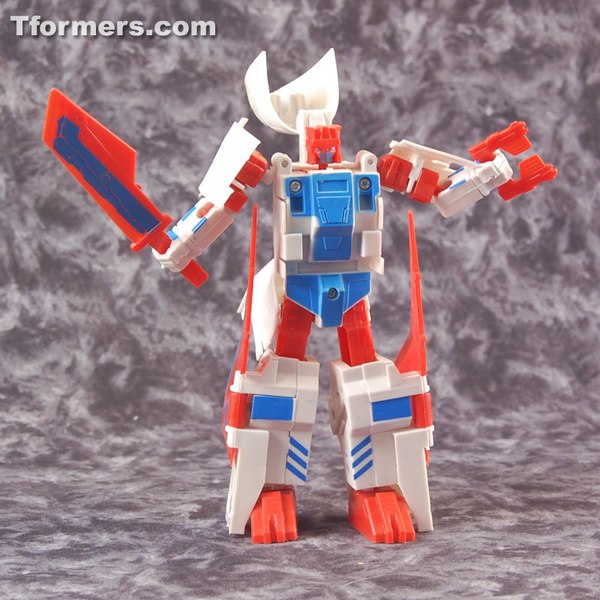 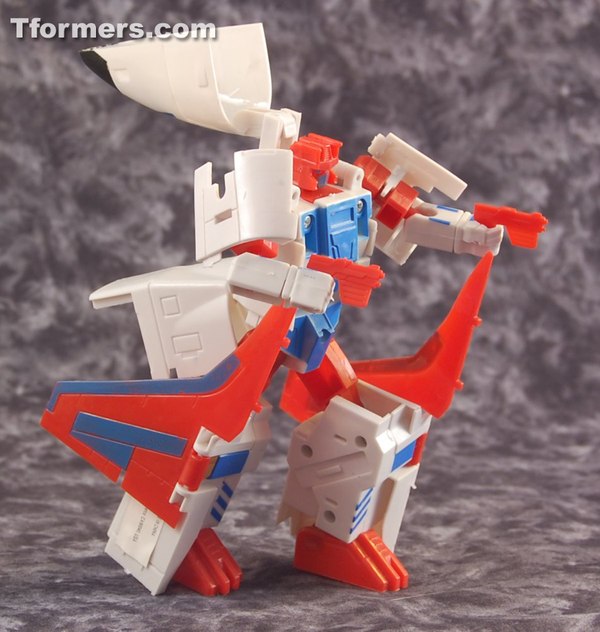 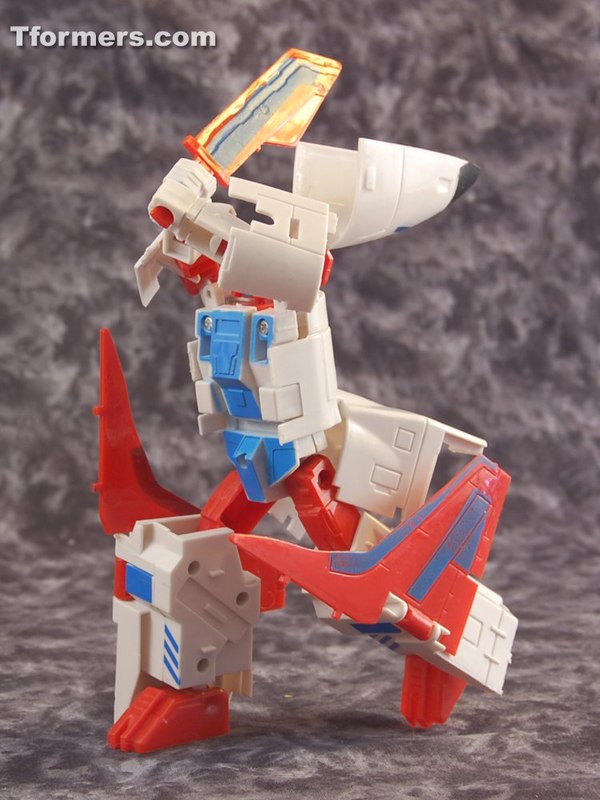 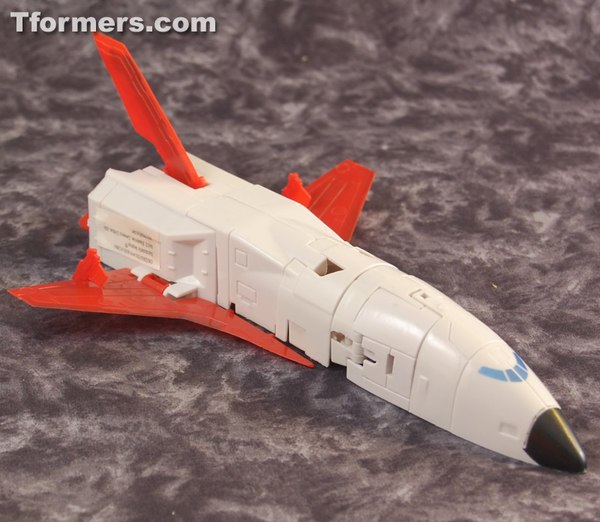 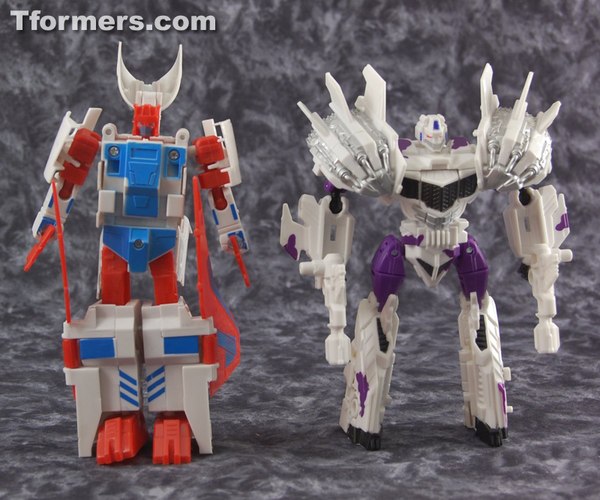 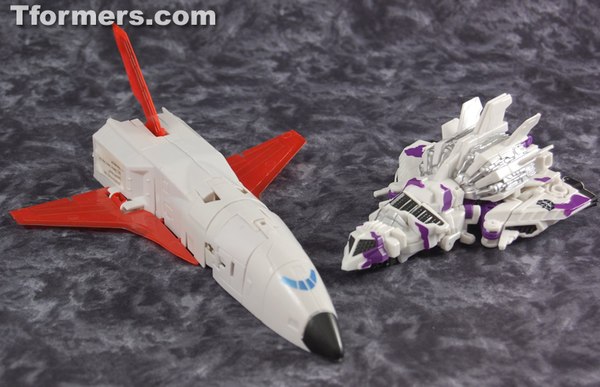 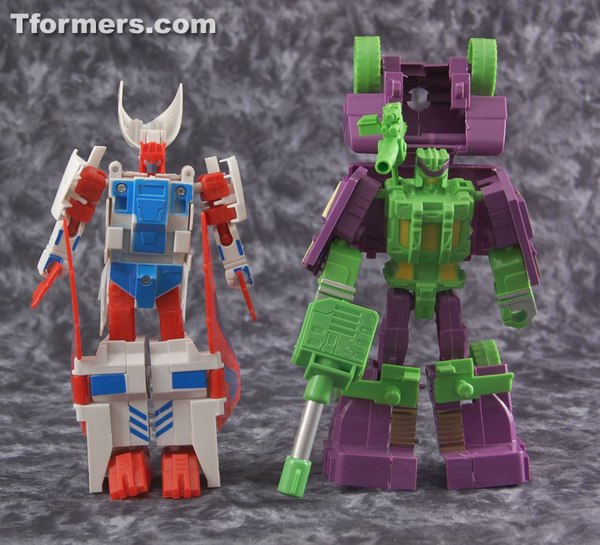 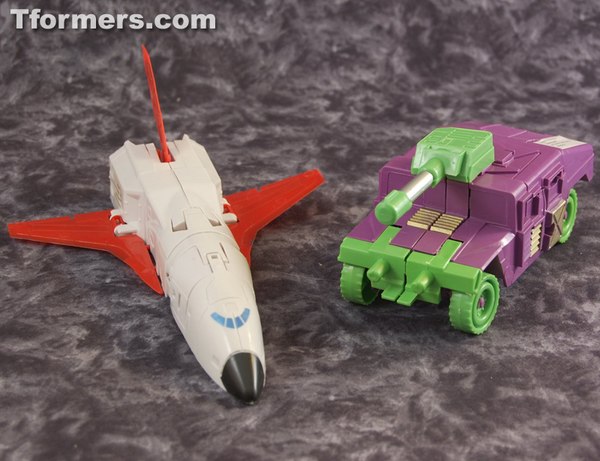 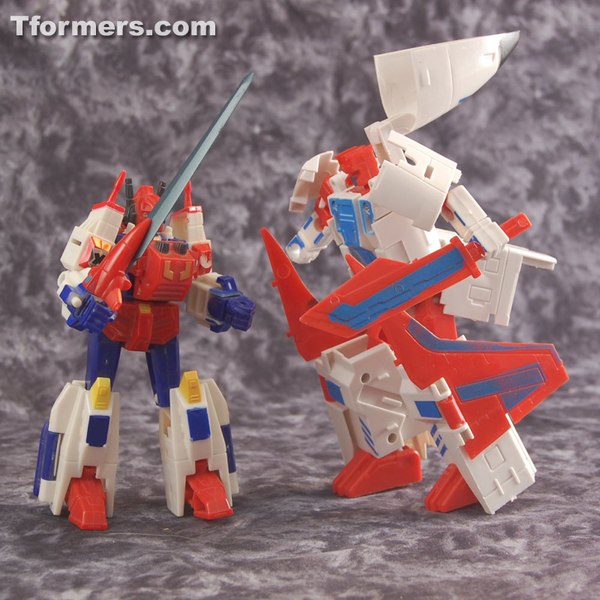 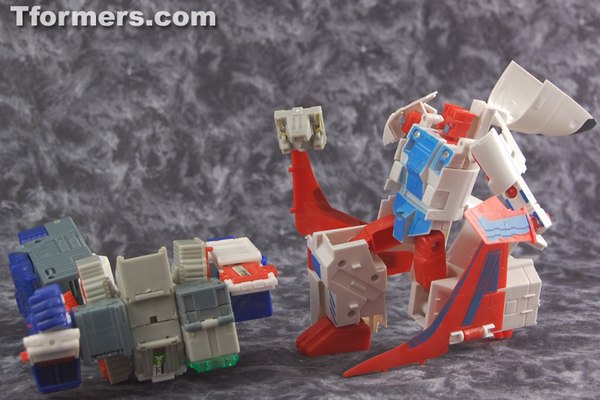