On Functionist Cybertron, Rodimus and Megatron's group head to... Cyberutopia? The quest couldn't be that simple, could it? No, of course not. Dissolution, Part 3: A World Displaced is written by James Roberts with art by Jack Lawrence and colors by Joana Lafuente. 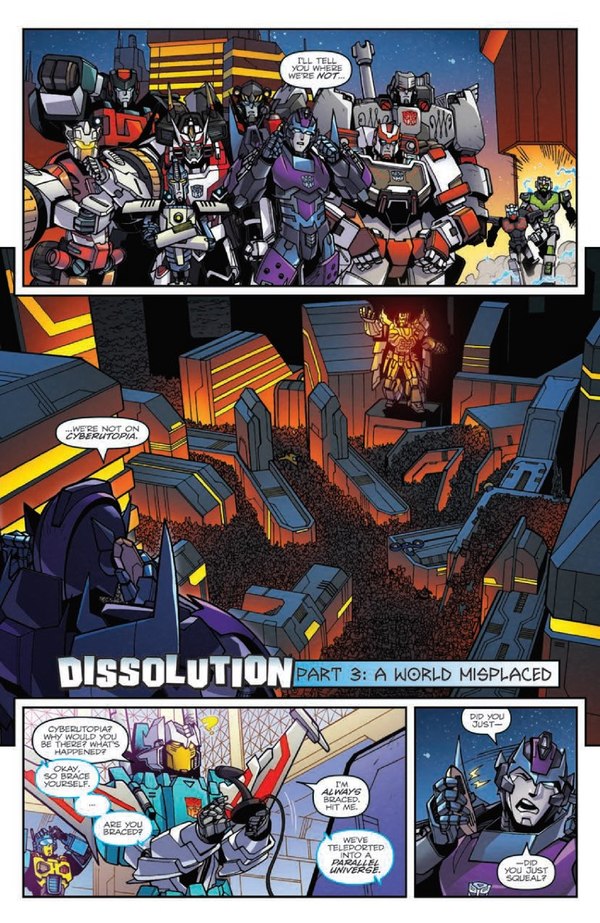 In terms of broader plot strokes, probably less happens this issue than in either previous issue, even on the Functionist Cybertron side where the bulk of the story arc's momentum had been up to now. This issue is one of those very expository chapters that MTMTE/LL hits sometimes, and those always live or die for me based on the quality of the dialogue and the information being revealed. The dialogue is definitely enjoyable on most fronts. Having characters like Brainstorm who delight in delivering exposition helps move things along and keep them interesting. In terms of what's revealed, though, we've got one incomplete story to be further developed later(isn't everything), and one thing that feels like it's a misdirect based on what we've seen in the past. There's a fairly strong cliffhanger ending, at least, but it feels as though you could catch the recap of this issue at the beginning of the next one and get everything you need out of it.

Also - though admittedly a very minor case - there is another reversal of a previously-established death. But in this case, since there's an ample explanation and the person who reported the death was a bit... unreliable, it's not something that I feel is a breach of reader trust the way Cyclonus' "death" in More Than Meets The Eye #47 was to me.

Jack Lawrence is still doing a good job with the exceptionally hard task of following an artist with a book-defining style. I'm reminded of John Romita's early days on The Amazing Spider-Man, where he felt obliged to work in as close to Steve Ditko's style as he possibly could to preserve visual continuity for the comic. As time went on, though, he felt more free to work in his own style, which came to supersede Ditko's as the defining look for Spider-Man for the next two decades. And I think that's something that could happen with Lawrence as he continues on Lost Light. And as I've probably mentioned before, the rest of the adapting that needs done is on my part. Facial expressions are universal in a broad sense, but in terms of finer detail are expressed differently by every artist. I'm trying to judge Lawrence's repertoire without comparing it to anyone else's and it's difficult for me still. It's broader than I'm used to for this comic and these characters, but I think that's something that Lawrence and Roberts (and I and hopefully all of us, as readers) will all reach a point of balance on eventually.

Joana Lafuente is a wonderful colorist, as always. The depth and definition she's able to bring to Lawrence's rendering of the architecture of "Cyberutopia" is absolutely lovely. Functionist Cybertron retains its unique color pallette there, stark red with dark blue shadows. Her subtle skill with gradation and light sourcing is put to good use during the battle as much as the simple conversation scenes. Together she and Lawrence do some excellent work of differentiating two very similar elements from different places. Subtly done, too, but very effective.

Lafuente also colors Lawrence's main cover for the issue, and I like what she does with Whirl. The highlights that open up the linework make for a really attractive cover. I'd love to see some interiors done in this style! On Nick Roche's cover it's Nautica's turn to float in space like this, following Megatron and Rodimus in previous subscription covers. I really like the themed covers IDW's letting their artists do lately. And Alex Milne gets a colored cover this month, yay! Josh Perez is on colors there, and does a great job with the backlighting effect. It's so well-colored as being bright that you want to squint at it. Lastly we've got an RI Cover by Nelson Daniel, an artist who I believe is new to Transformers. I like his Megatron in particular as a classical-style Megatron. As the specific MTMTE/LL version he's maybe a little too along the lines of the G1 cartoon, but it's just a strong image.

It seems very much like things will pick up next issue, which is good. The infodump nature of this issue is offset by the action somewhat, but otherwise this is a very talkative issue. It has its moments but it's rather slow - and again, I'm almost certain one of the reveals we get is going to end up being not what it seems. So it's not a bad issue or anything, but even the half of the story that I felt had momentum last issue has slowed. So, looking forward to that hopefully picking back up.