Dissolution, Part 5: Modes Of Production is written by James Roberts with art by Jack Lawrence and colors by Joana Lafuente. 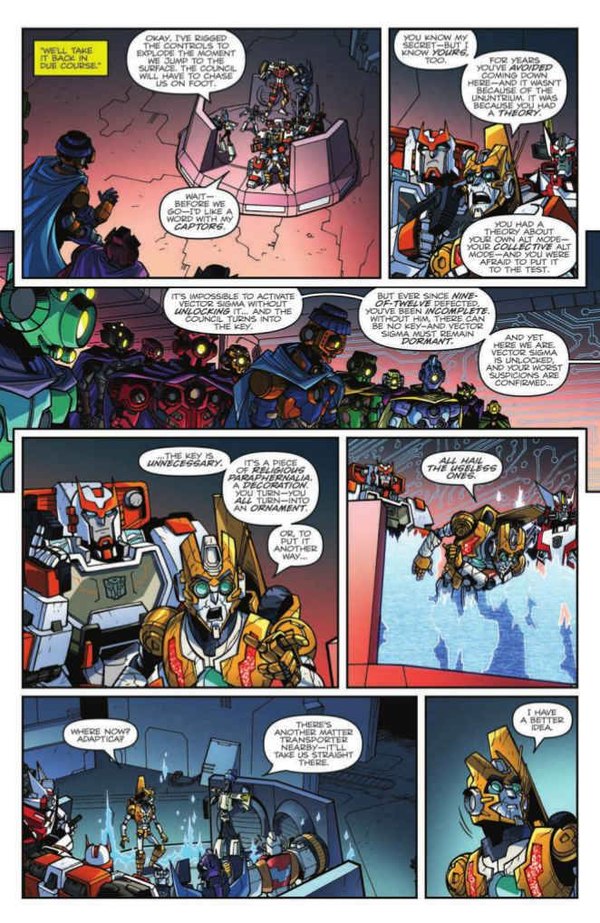 The story is coming into better focus now with the Functionist Cybertron and Necroworld threads both moving in more or less the same direction. It also helps that most of the focus is put on the Cybertron side, which I've been enjoying more anyway. The two Rungs are put to good use in an alternating sequence that reveals one of the secrets of his/their existence. Contrasting focused action-hero Rung with grieving ex-psychiatrist Rung is fairly entertaining in and of itself. And of course Functionist Universe Rung's background provides a bit more information on the Council. Megatron has a pair of interesting conversations, one with Roller and one with Terminus. Either or both may figure into the conclusion of the arc, I'm thinking.

Also, this is the month where I finally feel that Anode and Lug's story has become compelling. I wasn't really taking to either of them very readily, but a twist this month - which I didn't see coming in this form but is logical enough that I feel like I should have - has made me feel some genuine sympathy for the pair. I still don't think either is destined to become my favorite character, but this subplot is starting to feel like it's worth the time than Lost Light has put into it so far. It had a very humanizing effect for me, for lack of a better term.

Jack Lawrence has some great body language in this issue, particularly between Megatron and Terminus. In terms of posture and gesture his art all clicked really nicely for me. Something else clicked for me this month as well: Lawrence's take on Megatron's face was different from most other recent takes, but also familiar. A panel near the end of the issue finally made me realize that a lot of this Megatron's facial structure comes from the G1 toy and (especially) box art. Being able to understand the difference in approach goes a long way to helping me understand and accept this take on the character. Beyond that, the two Rungs were particularly well done and well-contrasted.

Joana Lafuente does her usual excellent job, and there are little things that are good illustrations of her skill. Just as an example, note that the two Rungs are consistently colored somewhat differently. Cybertron Rung is less saturated to give a "faded" look to go with his years of wear and tear from torture at the hands of the Functionists. It's harder to tell with Anode, since the Anode of Functionist Cybertron only appears once, but that seems to be the case with her too. But Rung is the standout, and it feels like the art, colors and writing are all working great together for him in particular.

Lawrence and Lafuente's cover shows the Council illuminated only by their own personal lighting - most prominently, their yellow monoeyes. It's a good image with an appropriate level of menace. Nick Roche and Josh Burcham's cover shows Anode reaching for her own personal treasure in the latest in the latest variation on the theme Roche has used for all his Lost Light covers. Alex Milne's cover shows a pair of Judge Dredd-styled Functionist guards in front of the Council's ship, the Cog, and a whole sea of propaganda. Josh Perez handles the colors, and the yellow of the monitors is appropriately overbearing in terms of the overall feeling of the image. Lastly, we have a Retailer Incentive cover by Jin Kim, who gives us Nautica, Magnus, and Drift in front of a large image of Rodimus. There's a rough, worn look to the characters that I like, and should not be mistaken for a roughness in terms of rendering. This is all very intentional, and it looks good. The coloring is similar in tone. It reminds me of the sci-fi paintings of the `70s and `80s. Nice!

The cover and blurb for next month's issue seem really straightforward and like they may be a spoiler, but there's a load of specifics we don't know yet, and seeing how those play out should be interesting. I enjoyed this issue more than I have the last couple, so here's hoping issue #6 builds on that.