Jazz gets ready for his chance to greet the world via TV and let his voice be heard by the entire world, telling about who he is as a person, rather than the image of an invading alien robot. But the media is never that simple - if only the President of The United States had been able to warn Jazz about it, instead of Optimus Prime... "What It's REALLY Like" written by John Barber, art by Casey W Coller, colors by John-Paul Bove. 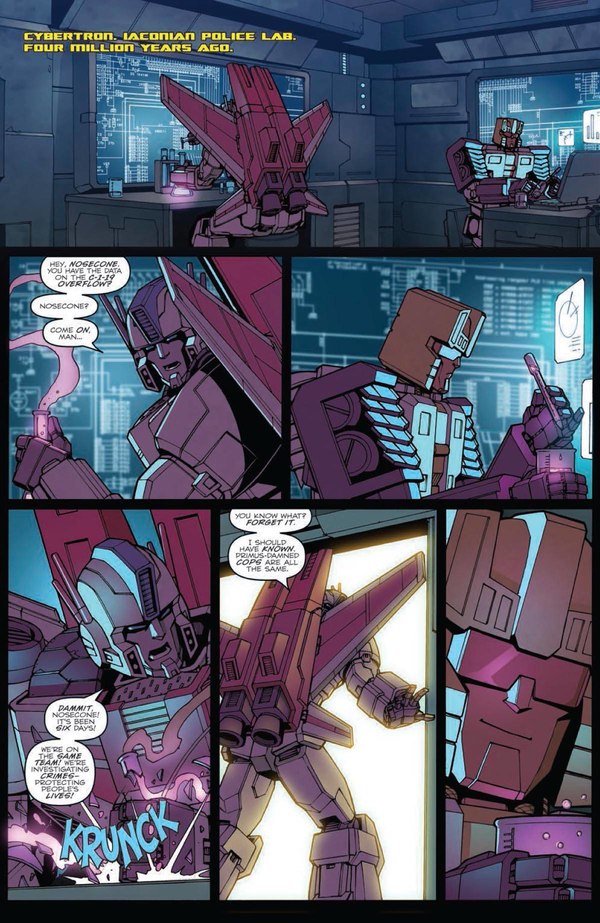 There's a lot of fantastic pages. This one was my favorite that made it in the preview. I think I love absolutely everything about how it's drawn and colored.

The best feature of this issue is Jazz's TV interview, largely because of the presentation. On the pages that depict the interview (with one Hector Ramirez, even - which should hardly be a shock from the writer who worked to bring interpretations of GB Blackrock, Marissa Faireborn and others in to the IDW TF universe) we're treated to the dialogue laid out on the side of the page, structured much like a magazine might print an interview, as a column with text in and out of bold face to denote whether interviewer or subject is speaking. It's a nice way to handle something like this without cluttering things with either a ton of narration boxes or having pages of talking heads in standard panel layouts - something that might well even limit the amount of interview that could be depicted. The interview pages are largely dominated by beautiful illustrations that represent the broad strokes of what Jazz is talking about on the page in question. These are so wonderful, and most of them have this quality about them where you can feel like this represents Jazz's imagination - or memory. Either way, you look at the images in his mind as he answers certain questions, and that's just so... right.

The previous issue had the President warning Optimus Prime that if Jazz went through with the interview, it would invariably be spun to the event of his killing a human. That warning is reasserted, and now comes with the advice of distancing himself from Jazz for the good of everything he's trying to accomplish. But he can't publicly disassociate himself without losing the support of the Cybertronians, which means the only solution is physical distance. This gives Optimus a chance as well to take Pyra Magna and try to work out the gulf between them. This is, if you were wondering, where the events of the 2017 Annual fit in, which came out back in March. Whether or not their trip will have the desired effect will be an important matter to discover soon; The Torchbearers, ever loyal to their team leader, are expressing open distrust of Optimus Prime, and if it comes to the point of open rebellion, Victorion is a dangerous weapon. Not to mention Pyra Magna continues to pursue any avenue available to turn anyone she can away from Optimus and those who blindly follow him. It's really an interesting story angle, and something that I hope doesn't just get swept under the rug with the explanation of "the Annual did it."

I talked about the art just a bit already in praising the (nearly) full page pieces accompanying the interview segments. Our team for this issue is Casey Coller and John-Paul Bove, and hot damn is this some slick presentation. The page of Jetfire and Nosecone in the lab really stands out to me. The characters are super sharply detailed, and I love the look of the lab space. Detailed like a metal-panel room, but minimal enough where it's not overpowering the characters. And the coloring is rock solid. There's a cold blue-green glow from the monitors, acting as the main light source in the room. Jetfire with his beaker of glowing liquid is tinted just ever so slightly pink, and on the opposite side of the page, Nosecone is harshly highlighted by the floating displays in front of him. The whole thing looks so good I feel like I can't do it adequate justice in trying to describe its quality - fortunately it makes it in to the preview, so you'll have seen it inlined above!

A little farther in there's a shot of Jetfire flying over Cybertron somewhere - drawn as the Classics Voyager toy, a personal favorite of mine- and while it's only the top third of the page, I just love that piece of art. The composition is great, the small details of the "wilderness" area at the very bottom, and then the colors give such a perfect texture to all the background landscape, making it a bit fuzzy, as it ought to for being in the distance. Casey and John-Paul have a beautiful synergy with their respective works on the art in this issue. I really love what I'm seeing here. Casey's lines are so sharp and precise, rendering the characters wonderfully, and boy can we get some nice faces on the robots here. John-Paul's colors are bright and clean in the foreground, just a bit duller for backgrounds. The awareness of environmental light is spot on, too, again pointing to our example page up above.

I like this little break from the storylines we're kind of on right now, since it's making an opportunity to see some different takes on all the familiar elements of this title as other art teams get to take a crack at it. It's nice to have the variety every now and then. Get a bit of a refresher, and then be able to appreciate the usual team when they're back on a little bit later. But - and I say this often when substitute artists come on - I really hope more chances will present themselves to see Casey and John-Paul working together on a Transformers book again! 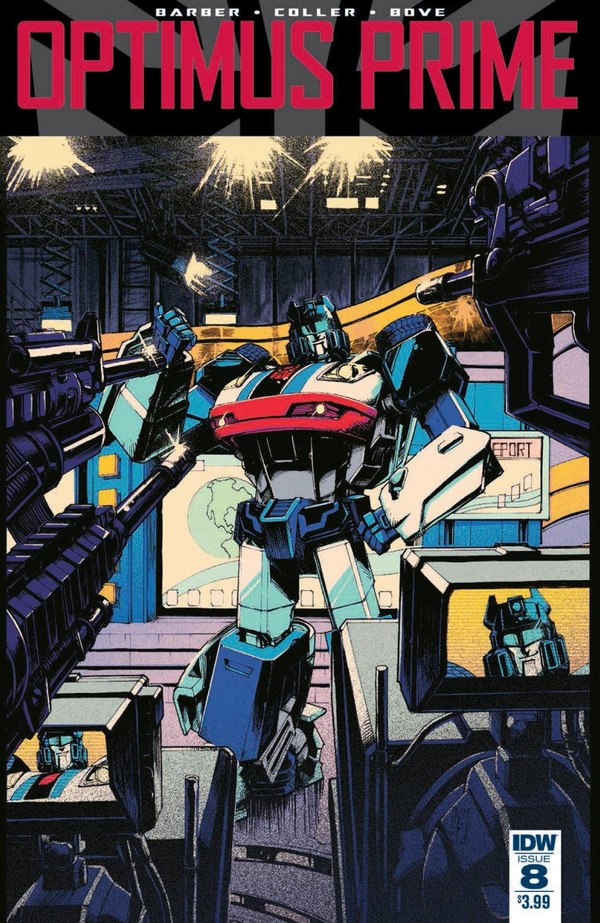 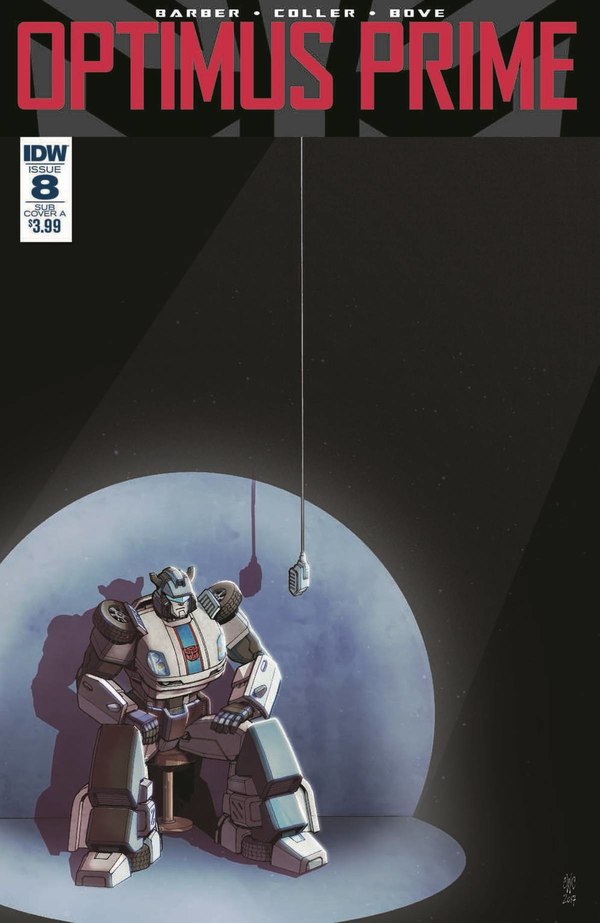 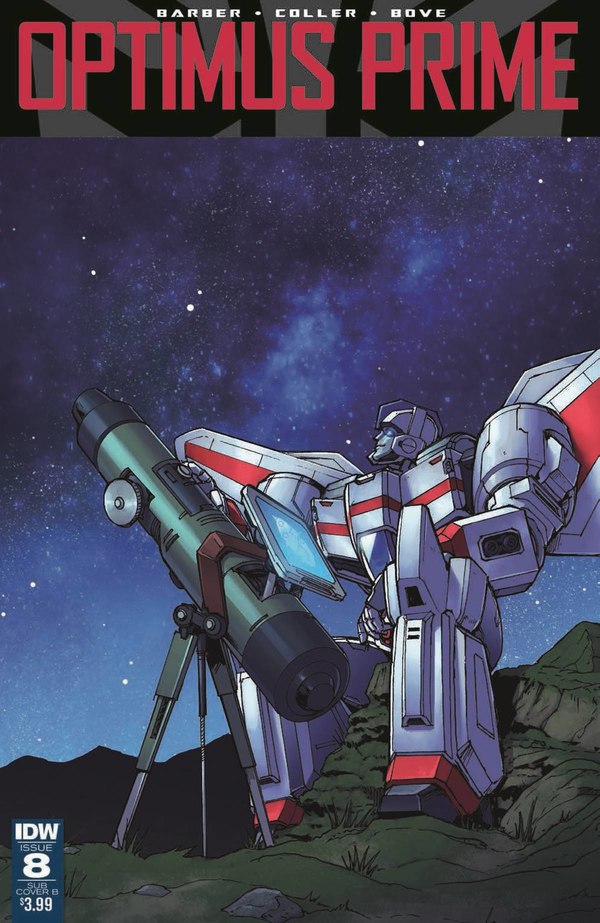 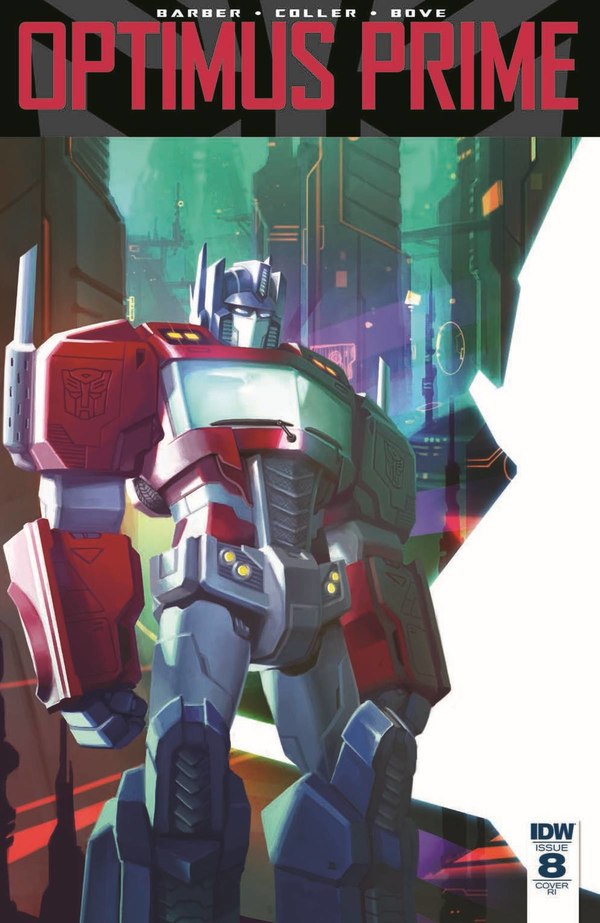 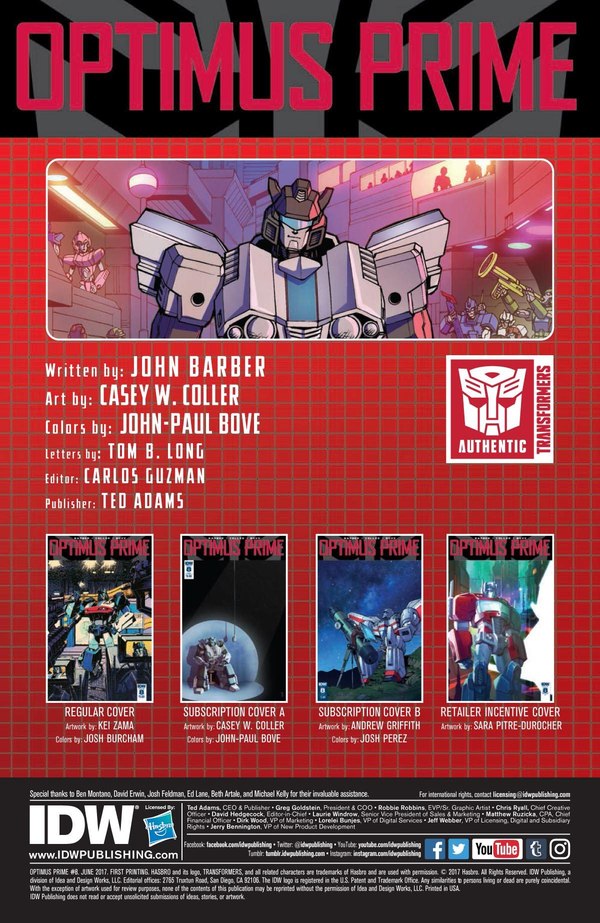 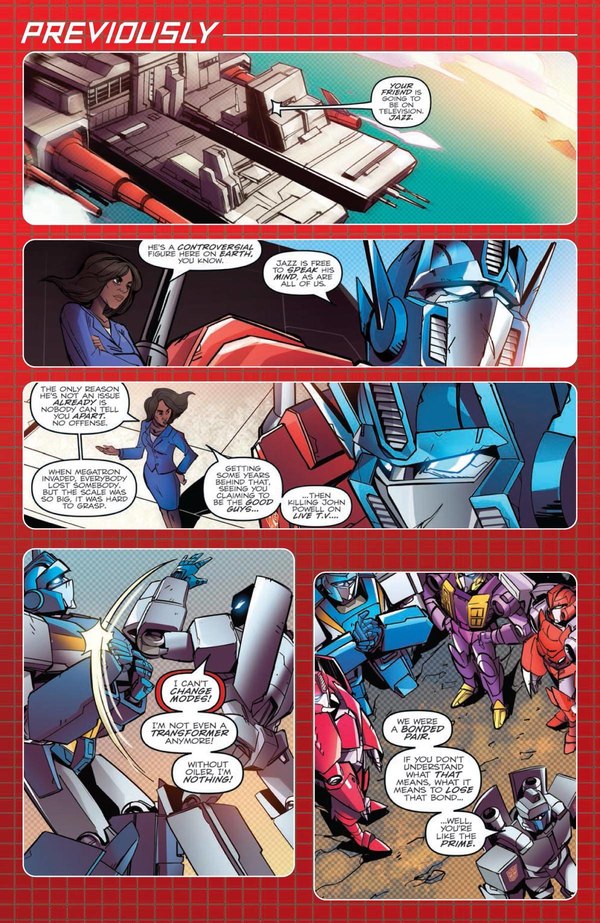 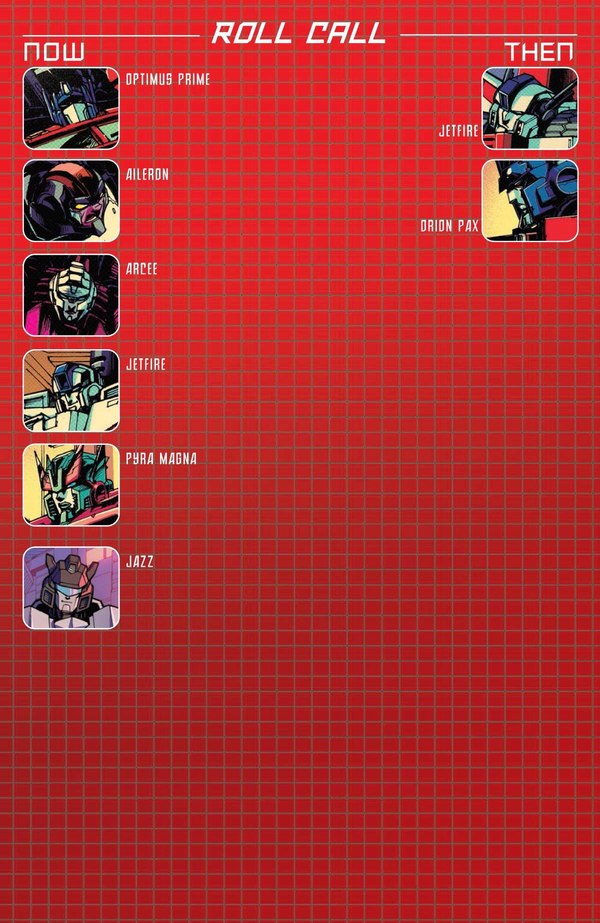 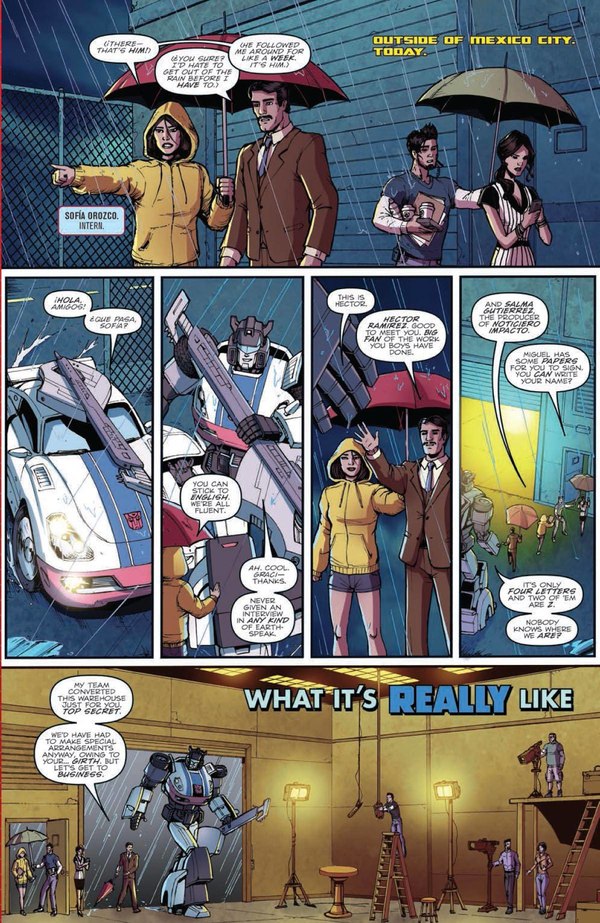 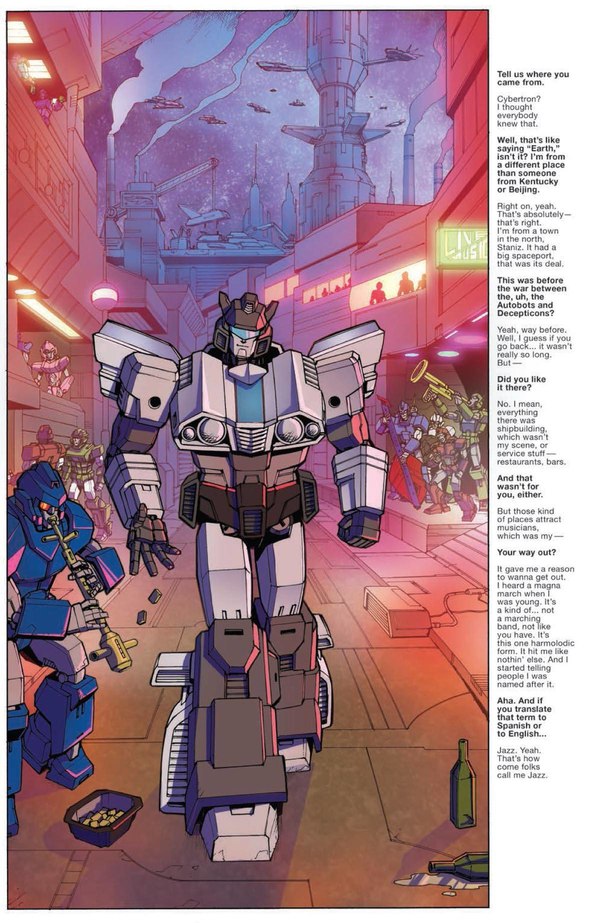