Things are going a bit wrong. The delegation from Earth has traveled to Cybertron, as has a group of the Earth-based Transformers in order to work out entry to the Council of Worlds. But an untimely explosion, cut off communications, and tensions are rising quickly. With Optimus Prime and Arcee off world and out of reach, Aileron has to take command. She is so going to hate this day. "Primeless, Part 1", written by John Barber, art split among Sara Pitre-Durocher, Fico Ossio, Paolo Villanelli, and Kei Zama, with colors for all by Josh Burcham.

While First Strike is First Striking its way along, this issue lets us take a look at what's up on Earth during the crisis - or at least one small corner of it. Aileron has to initially defuse a tense moment inside Autobot City, but is able to direct a few actions and get people to say the right things to calm most of it down. That isn't really what the issue is about. The issue is about Aileron then needing to take control of the most dangerous element in the mix: the colonial soldiers, as she leads them away from all the important things to do some semi-busywork so they can't try to launch a holy war or something out of their fear that Optimus Prime is dead. I like that premise by itself, it lends to more than one good story that can be grown out. The title, "Primeless" kind of gives a hint about what direction we're going to take though, and indeed there's a strong thread here about challenging Aileron's belief or faith in "The Prime" as the increasingly disillusioned colonists start looking at things with more common sense. Aileron may not be ready to give up on him yet, but it's easy to believe that something along that line is coming. Quite a while back we got a flashforward panel showing an Aileron who appeared to be quite ...different... from the one we knew at the time. I think this is probably a major stride towards that end, and by the time the current arcs are finishing up, a gulf will have formed between Aileron and Optimus.

I'll be glad if that storyline is being picked back up. Aileron is valuable for storytelling, since the general condition of the bots from the colony worlds can be told through her as a start-to-end process. In others we see essentially snapshots along the way, but not as much of a complete picture. And what we see almost invariably involves the colonists who were never touched by the war of the general decay of Cybertronian society becoming very quickly contaminated by contact with Cybertron. Go back to issues in the 40's of The Transformers when Aileron was introduced, and you see a drastic change in the character already. Another Camien chose to identify as a Decepticon after the fact, and of course our originally fanatical representatives of several colony worlds featured in this issue are even falling under sway of the general atmosphere of tired despair and negativity that a lot of the Cybertronians cast about, whether intentionally or not. I don't think we're going to see solved the problem of Cybertron's ruined culture anytime soon. One would expect the influx of new ideas and fresh perspectives from the colony worlds would be valuable for that, but not if Cybertron overwhelms them first. So like I said, eager for Aileron's story to continue because there's a lot of good exploration we can get out of it.

There's a lot of artists contributing to this issue, most for just a few pages. The diversity of styles is, perhaps, not always to the issue's benefit. One thing I specifically enjoyed was someone's take on Aileron's vehicle mode really hammering home the whole concept of "car with wings and jet engines" that the original design art for her left at least a tiny bit less obvious. I'm not gonna pick apart the art in any detail, cause I don't want to use one artist to compare to another. Suffice to say there were nice faces, there were unintentionally scary faces, fun character designs, and nice scenery. The thing that tied it all together and made a fairly cohesive presentation from sometimes dissimilar linework styles was Josh Burcham's colors, which follow suit to the book's standard style. It goes to show how much of a visual identity that alone gives and how important both sides of the art team are to making a comic be itself.

My favorite cover for this issue is the main cover from Kei Zama and Josh Burcham. Nicely indicative of the contents while still presenting a unique spin on it, plus I adore the art that Kei and Josh make together, so this was an easy win for me. The B cover by Casey Coller and Joana Lafuente is a strong runner up, focused more on the colony soldiers and Slide's growing feelings of isolation after the death of his other half. The remaining covers are portraits, basically. An Andrew Griffith full body shot of Optimus Prime, and a black and white Jetfire portrait by Marcelo Matere. Both quite nice pieces, and I especially enjoy Andrew's coloring on his Prime art.

Quite a good issue this month. Good presentation all around, and kicking off a story whose implications for the larger arcs of some of our characters has me excited. More of this, please! 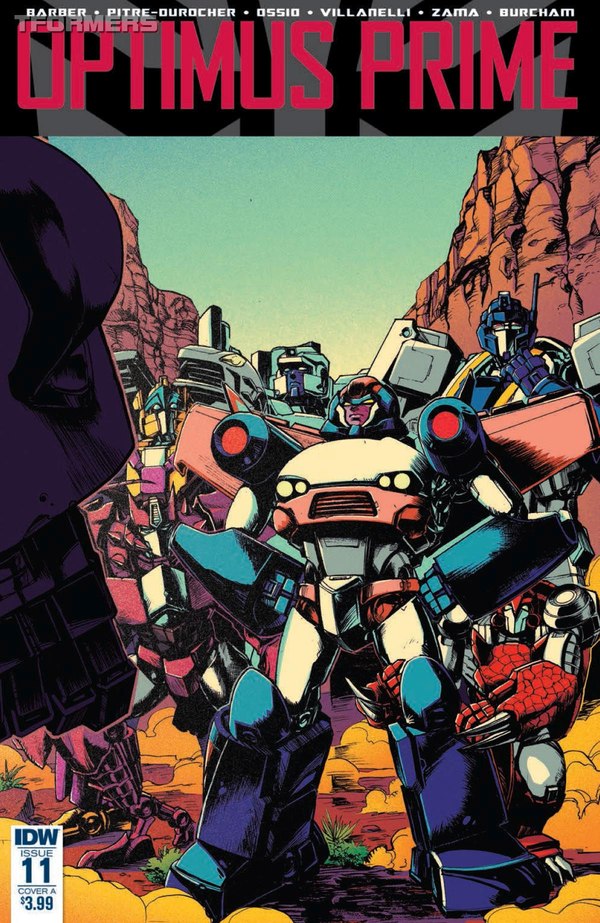 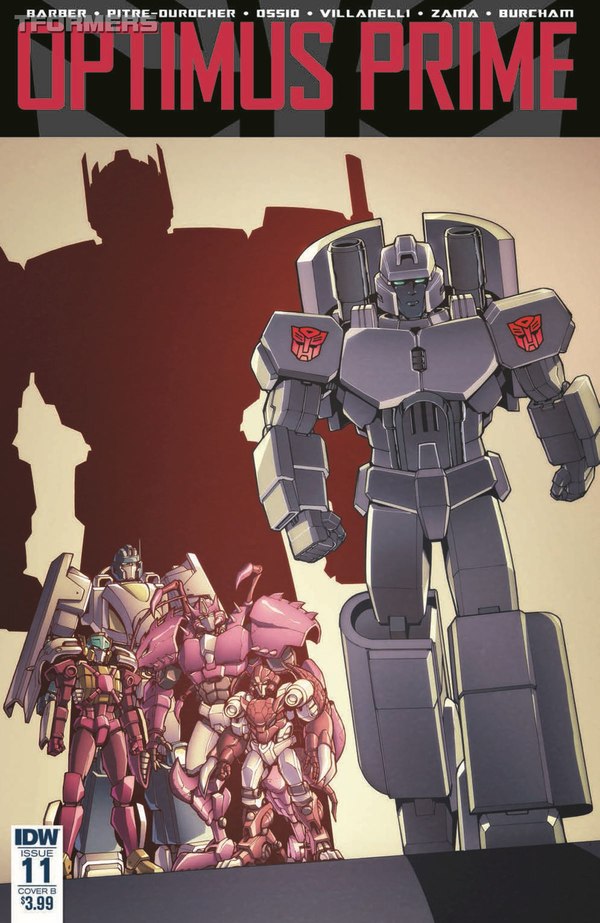 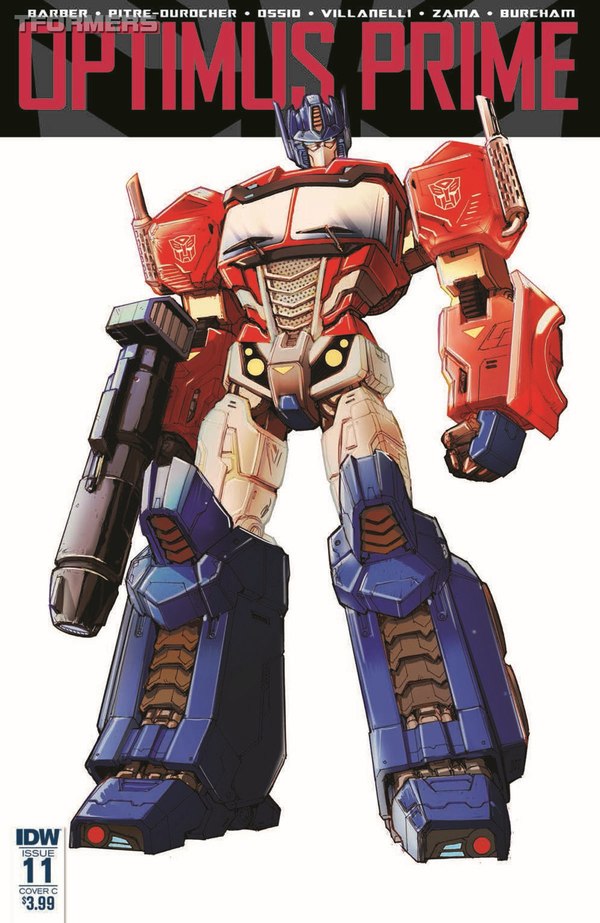 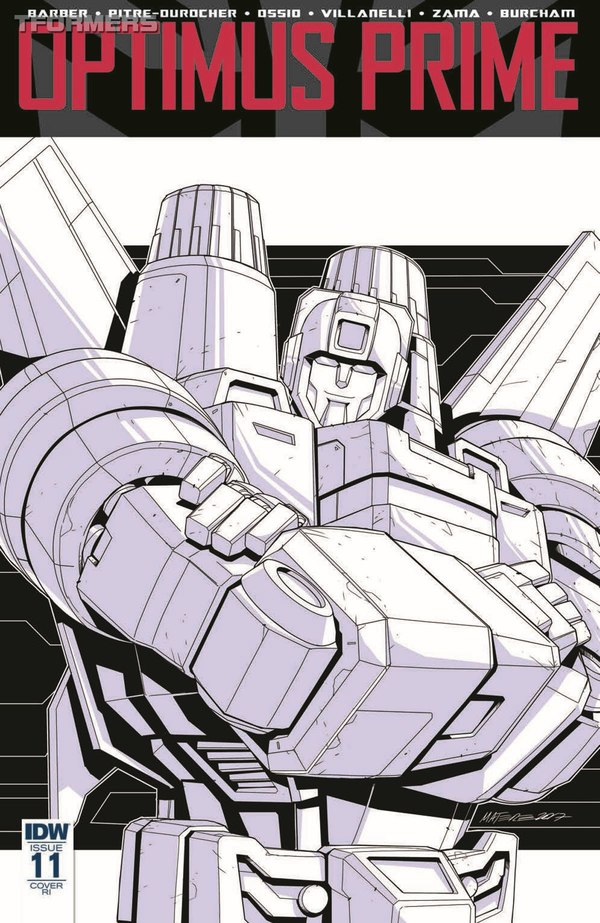 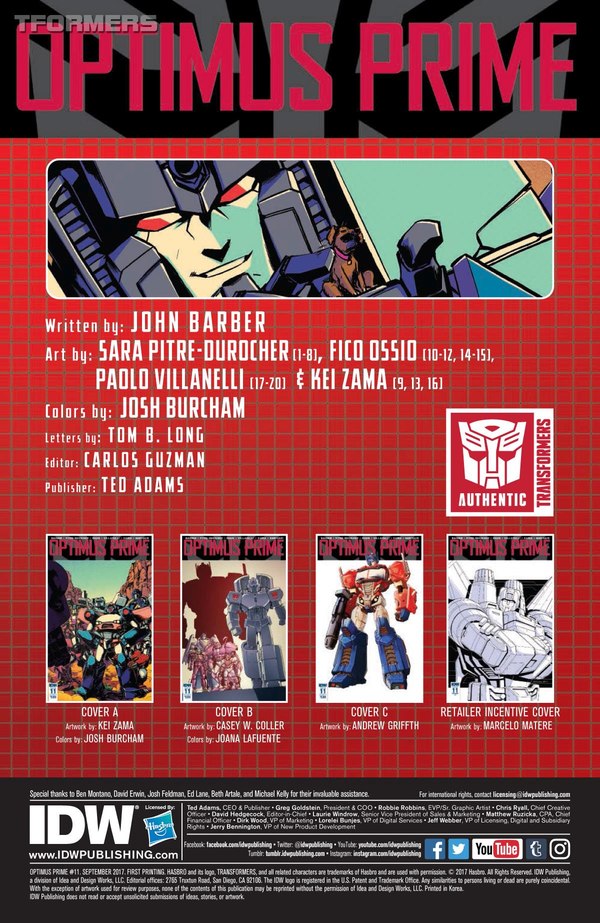 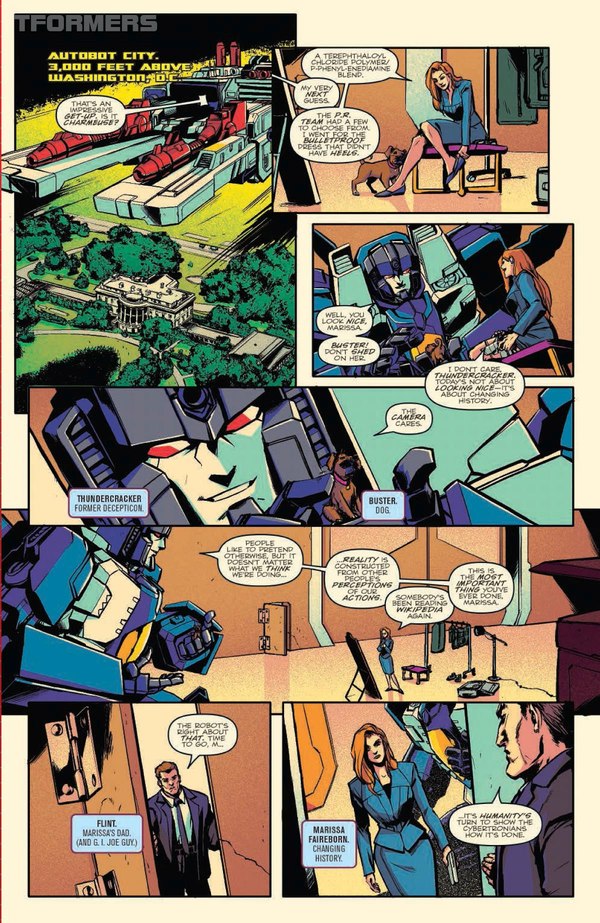 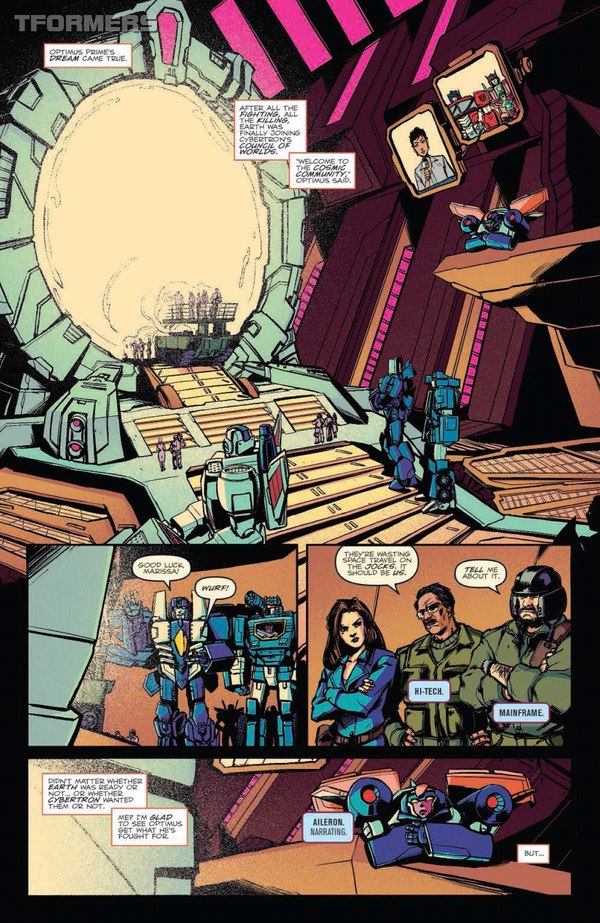 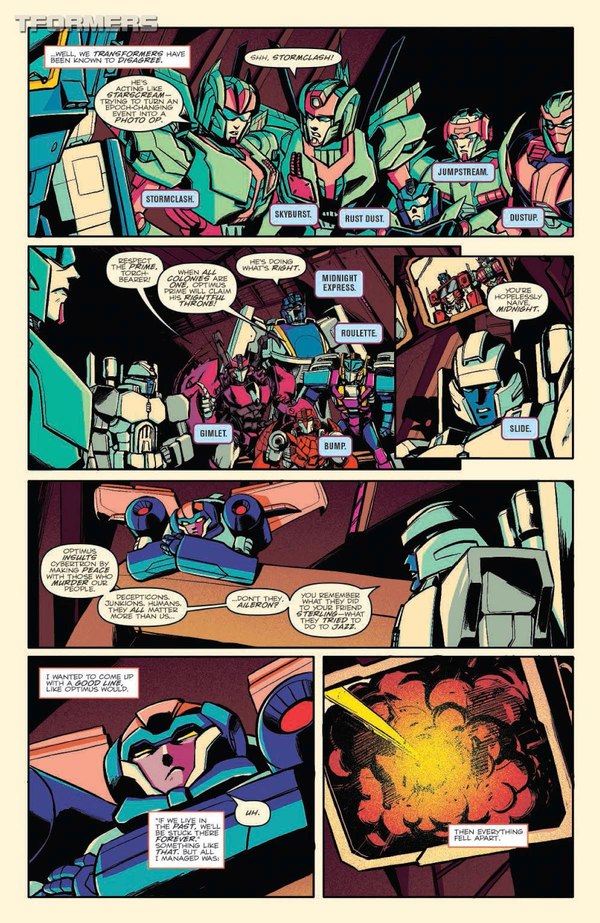 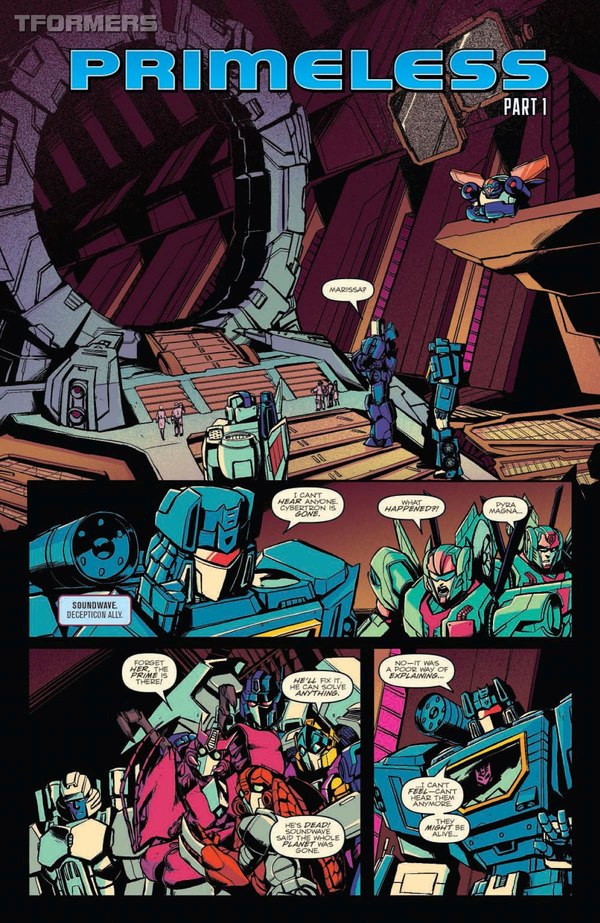 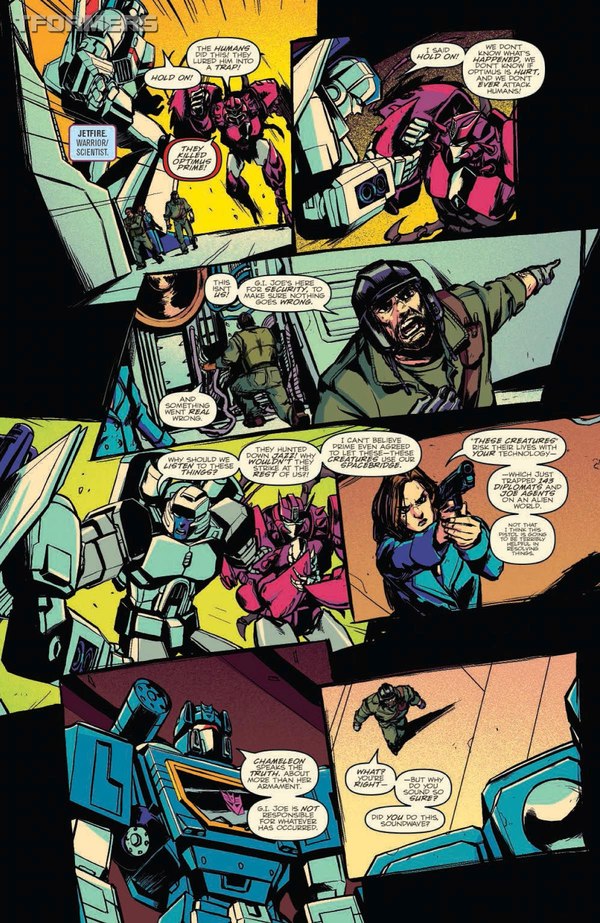