Recently released as a target exclusive, Dreadwind and Smokejumper has had a long history. I Don't know everything about it's history, but I've heard it was originally stretches back to G2, when the toy was first issued as Dreadwind & Smokescreen. It was almost issued in G2 as Megatron & Starscream but cancelled. It later showed up in Beast Wars II as Starscream and BB. Now it's been released, under the RID name, even though latly RID has only been used to release toys that don't fit with Armada. So I've had a week with the toys now, so I will first review Smokejumper, move on to Dreadwind, and finally speak a bit about the combined mode. 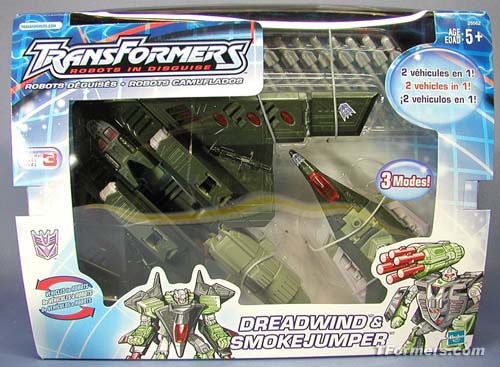 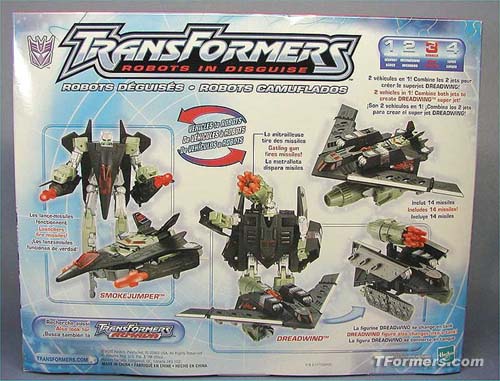 Smokejumper's alt mode is that of a fighter jet, probably a stylized F-15. If the starscream name was ever attached to it, it would make sense. Anyway, it's got a missile launcher under each wing, though it is actually attached to his leg. His top fins are adjustable, so you can lay them down flat or stand them up, and I prefer the later. His overall color scheme is gray with "Army camo" green, an odd color choice for this type of jet, I've never seen it in real life. interestingly, the packaging shows him going to basic black. I geuss it's just a stock photo from a previous near-release. His cockpit has a transparent blood red canopy, and if you look inside you will actually see a pilot's Chair! Overall, a pretty good mode, but his hips and legs create too much of an undercariage to really be aestecally pleasing.

A word about the transform: I hate writing descriptions of how to transform a toy, because it would be confusing without the toy right in front of you or at least a few step-by-step pictures. I will say that it is a bit more on the complicated side of the spectrum, it it took me a little bit to work out the twists and flips even with the instructions. For those of you who like complicated transforms, well you may not be in hog heaven, but it will be more pleasing than what other recent transformers have gotten us used to.

Robot Mode: Smokejumper isn't that big of a toy, and belongs to a class size that doesn't really exist anymore. I'll put it like this: if he were sold separatly, he'd be about 6 dollars. Anyway, he's a pretty well articulated bot, with shoulder, elbow, hips, feet and (sort of) knee articulation. about his knees, they swing out to the side, sort of like Armada Megatron, and they don't bend back like knees propper. His head I find interesting. It's two colors are white with red eyes, but the shape of it makes it sort of look like an Optimus Prime style head. Interesting choice for a miniature Decepticon. To complete the transformation, you can take his 2 missile launchers and fit them into his hands. They seem just slightly oversized for him, but the resultant look is very macho, even if he has a hard time standing up.

Overall: A cool little toy that even if he hadn't been packed in with Dreadwind would have been worth an individual purchase. While I wouldn't buy the package just for him, he really does sweeten the deal.

Despite this being billed as a 2-pack, let's be honest, Dreadwind is the real deal. He's 2/3 of the duo, so the burden is on him to make this pack worth it. Luckily, He does.

Stealth Jet mode (individual, not combined): Let me help to define this mode so you understand: this is Dreadwind without smokejumper, with his cannon in the space where smokejumper would be, pointed with the missiles inward and the rear outward, so to look like his main jet engine. I went back and forth about weather this was an official mode, as there seems to be some disagreement. I'll count it anyway.

His vehicle mode is sort of a stealth bomber. his color scheme is the same as smokejumpers, which really doesn't make sense for a stealth jet: he should just be a basic black. Under each wing is 3 slots, and in these slots you can attach the missile, which with press of a button can be dropped as bombs. This feature is better in theory than practice, as it is hard to make the things stick in there. It's annoying when your missiles fall out before the big bombing run on the autobots. I usually ignore this feature. Otherwise he is pretty cool in this mode, nice sweeping wings and a solid cockpit. There is a big gap where smokejumper fits into, but if you don't look at the toy from directly above it's okay. Pretty good overall, but not as good as the combined mode. (I'll get to that later.)

Land assault Mode: Well, wouldn't you know, Dreadwind is a triple changer! However, his 3rd mode here is a bit of an eccentric one. The idea is that he becomes some kind of a tank, but it just looks like a reconfigered stealth jet with tank treads. It seems out of place and seems like an odd inclusion, but if this was originally supposed to be a Megatron, then the tank mode does make some sense, because that is what the other Megatron toys of that line were. Since it makes it's first real apperance here, I'll mention his missile launcher. It's sort shaped like a revolver chamber, fits six missiles and with a turn of the rotory handle it can fire these missiles in quick succession. It's really cool, and reminds me of Scourge's rapid fire weapons. Between them, I'm starting to think that G2 was the golden age of projectile weapons design.

Robot mode: The overall impression of his bot mode is that of a stout, "muscular" robot. He looks powerful with his rotory launcher over his shoulder, and he is pretty well articulated. My main gripe is his arms, which have an annoying plate overthem. they could easily have been redesigned without it. He can even wield one of Smokejumper's Launchers, which I've never felt as neccesary. His head looks a little simple, sort of like a bullet with eyes. But it works for him.

All in all, a very good toy.

Combined Mode: In there jet modes, fold the launcher under Dreadwind and insert Smokejumper. I've never really seen a gestalt like this before, it's a rather uncommon design. Smokejumper makes Dreadwind look more complete, and this combination frees up the Megalauncher for massive strafing runs. It won't really seem like an all new mode, just an improved version of the stealth jet mode. Still, very cool.

In Conclusion: a very cool package that's been a long time coming. Highly recommended for both toys.