An homage to Hot Rod and Rodimus Prime of the bygone G1 era, Energon Rodimus appears to be a fine example of a toy designed to become a pair of pants and vehicle first and a robot last. Let's just hope this Rodimus doesn't have any inclinations to help Prime this time around. 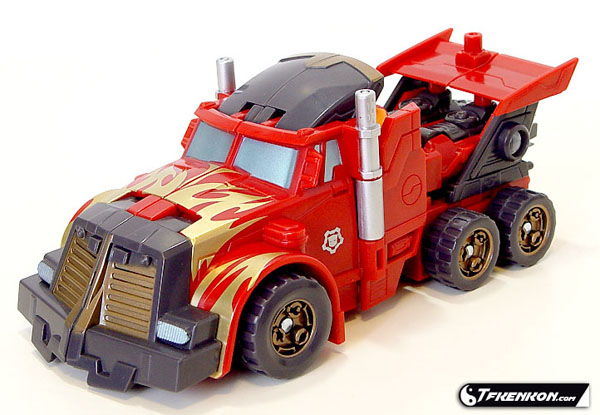 To transform into robot mode, flip up the front grill and bumper and flip forward the top gray section. Flip the front section so that it points upward, then flip around again 180 degrees. Flip the small orange sections out and close the foot panels. Stand robot and flip the waist panel down. Swing the rear tire sections out and rotate the jets down and forward. Swing open the spoiler panels, flip the hands out and return the panels to their original position. Bring the robot head forward and down and lock into place on the small, round tab. 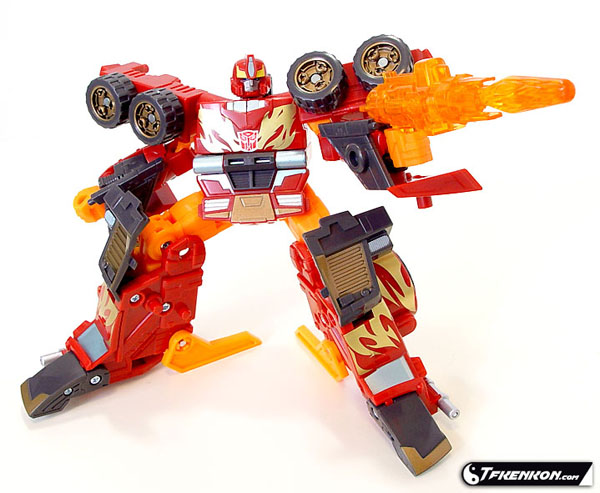 In robot mode, Rodimus stands about 5 1/2" tall. He features a silver forehead grill and face with blue eyes and a yellow crest on either side of the grill. The gold flame motif continues on his chest with an Autobot Symbol stamped in the center. The truck grill sections almost completely cover his upper legs. Rodimus also has a good amount of articulation: rotating neck, ball-socket shoulders and elbows, full hip movement (which can be slightly hindered be the waist panel), and bending knees. His arms are limited in their movement due to the spoilers. Rotating them 180 degrees helps that a little.

Utilizing the power of "the Spark of Combination," Rodimus can combine with other Powerlinx Autobots to form larger, and sometimes sillier looking, robots. To form the upper torso from the robot mode, return the hands and arms to their original positions. Split the upper torso in half and swing the upper portion around 180 degrees. Bring the legs down and rotate 90 degrees so the large hands face forward. Close the orange stabilizers and flip the legs in and down to form the arms. Flip the rear wheel sections around and forward and flip the head around. Attach to any Powerlinx Autobot in pants mode.

To form the lower torso from the robot mode, return the hands and arms to their original position and turn the head so that it faces down. Split the upper torso in half and swing the upper portion around 180 degrees and attach to any Powerlinx Autobot in shirt mode.

Rodimus is a good toy. He is a little disproportional and his articulation is limited somewhat. Still, the homage to his namesake is very nice and his vehicle mode is solid fun as well. 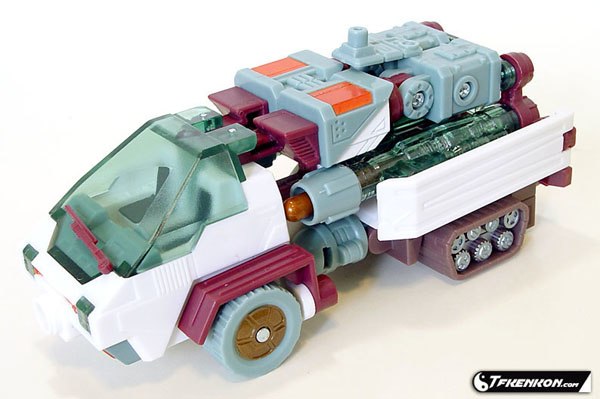 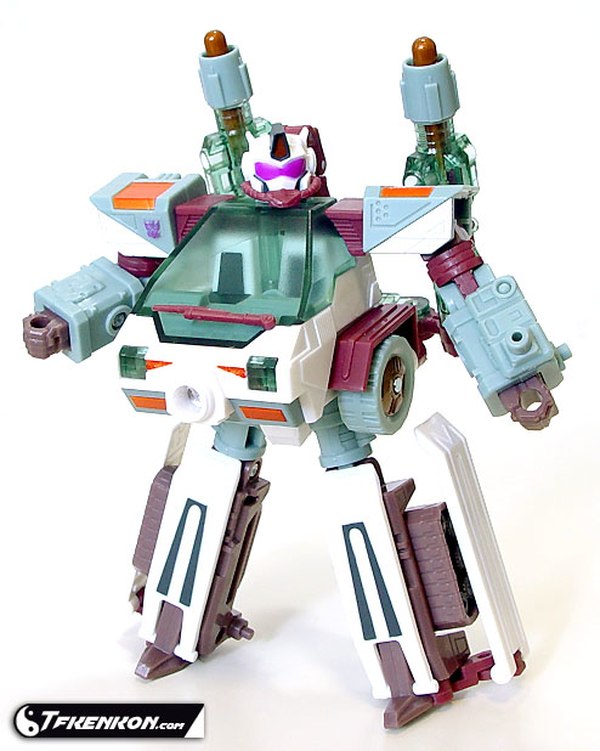 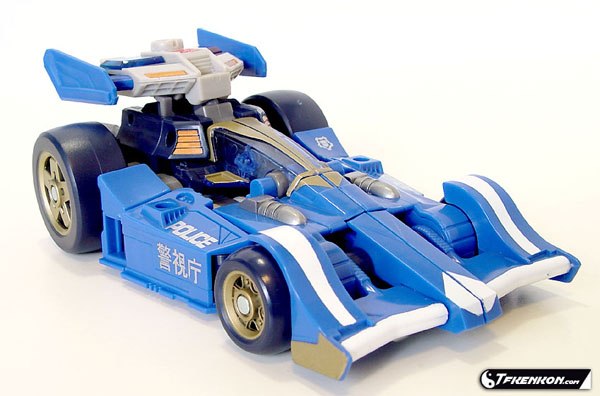 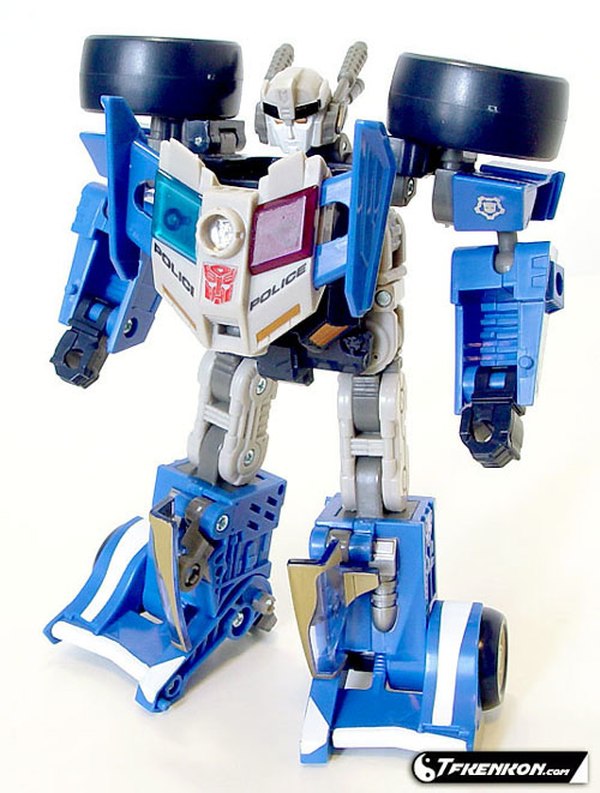 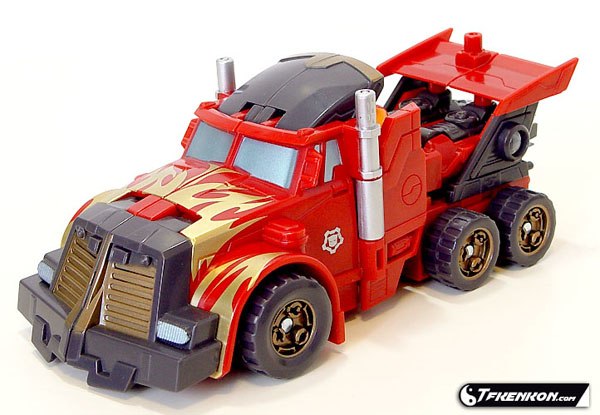 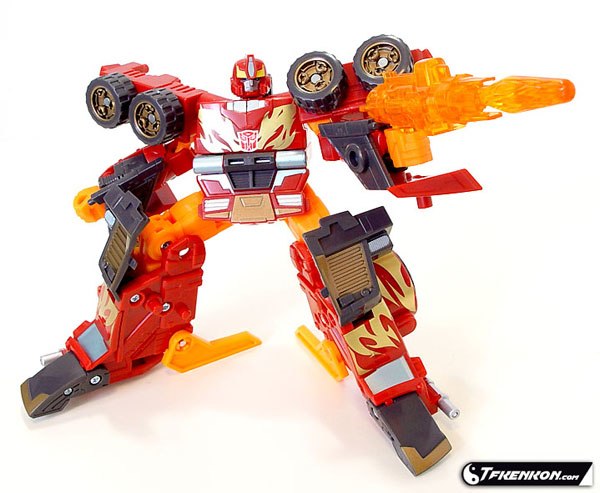