And so the "Mutiplicity" storyarc goes on. After the shocking events of last issue, "Multiplicity Pt. 3" picks up a whole slew of events happening simultaneously. As Thurst leaves Cybertron to travel with the Cybertronian contingent to Earth, Demolishor is sent to investigative ghostly events at an Energon ore processing plant when he is attacked by an invisible assailant. Meanwhile, the Terrorcon clone army continues its ruthless assault on the Earth cities as the outnumbered Autobots (and Thrust) make a brave stand against hopeless odds. In Canada, three Autobots stands guard while a mysterious object falls from the sky--bearing Scorponok.

Inside Unicron, Megatron awaits impatiently while Optimus Prime, trapped by Unicron's interior defenses, must decide whether or not to revive his age-old arch-rival. In Turkey, only Strongarm is still standing after the ambush by Mirage, Slugslinger and Sharkticon. But they may have overlooked the fact that a human named Kicker can take care of himself. Alpha Quintesson and Avalon excitedly and nervously await the fulfillment of their long-laid plans.

Just when the Autobots on Earth are about to be overrun, a mysterious figure emerges from hyperspace, and comes out firing--it's Megatron! And appearing from behind a fallen Demolishor, shimmering into solidity, is the resurrected Starscream.Keeping in step with the great plotting found in the "Multiplicity" storyarc, scribe Simon Furman keeps a whole cauldron of oil boiling this issue, with conflict on every front. Furman's writing is getting better with every issue, the plot getting more complex and busier, all welcome developments in what had been a lollygagging Dreamwave title. Now things are really hopping--and things look like they're only going to get better.

Alex Milne's art is uneven this issue, more inconsistent than in issues past. His robots are still fantastic, but the coloring seems a little off. Even in the heat of battle, the bots look like they have all received a new coat of Wreck-Gar's wax. The proportions are all mixed up. And the humans looks worse now. Not only do they all look alike, they all look yucky.

But Milne gets great mileage out of the first action appearances of Energon Megatron (what a pinup) and Energon Starscream, as well as a continuing gallery of Autobots of varying looks. Art quibbles aside, "Multiplicity Pt. 3" is a busy, rousing read that promises even more shockers in the future. Bring it on.

1) With this appearance of Starscream, only Demolishor remains in his old Decepticon form, though after this issue, that remains to be seen.

2) Looks like Furman and Milne have decided to stick with this look of Councilor Avalon, despite the visual contradiction from early issue of Energon. Just one question: If this is Avalon, what does Levitacus look likenow?

3) We get a very good look at a whole buncha Energon Autobots in a midst of a fight: Landquake, Perceptor, Cliffjumper, Jetfire, Bulkhead, Rodimus, Be achcomber, Hotshot--plus a good old Armada helping of Red Alert, Hoist and Decepticon Thrust.

4) A curious little note: Guarding Base Site I are three Autobots: Energon Ironhide, Armada Overload and--Dropshot. Yes, the Triplechanger (BWTF's Ben Yee said it first: he's based on a Takara G1 prototype that turns into a horse and a jet--you can see him in the Japanese Generations book) who was cut in half by G1 Bludgeon in the Armada "Worlds Collide" storyline, apparently survived that encounter (coincidentally, Overload with with him when that happened as well). It's always nice to see these quirky characters survive--though let's see if he survives this encounter. Tha fanboy in me actually wishes Takara would do a limited run of this guy, even if he's kinda dorky, because he's so square he's cool.

5) This issue works on something that has become more pronounced in Furman's writing--that the humans should stand up for themselves. Kicker does it and apparently Rad is ready to do just that. 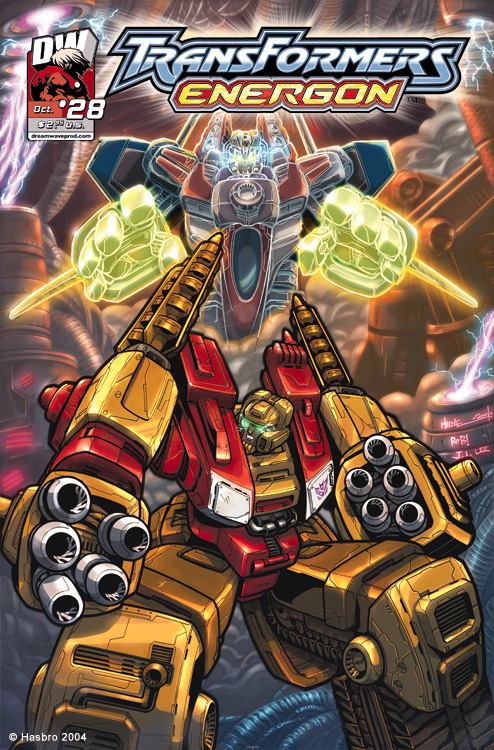