During the Powerlinx Battles era of Energon, many fans anticipated the Scorponok mold would be repainted into a G1-Masterforce Black Zarak color scheme. With Hasbro repainting even Shockblast it seemed like a no brainer to repaint one of the best molds in Energon into Black Zarak colors. Unfortunetly, this repaint never did surface...until now! While Galaxy Force is a bit ambigious in regards to its relation to Micron Legend and Super Link (there are some indicators it is a sequal, just not really stated), the Cybertron line in both show and figures are making an all out effort to connect the series. As such, the fate of such Energon characters as Scorponok and the upcoming KB Exclusives Snow Cat and Downshift are told through their bios. Dark Scorponok's bio is just proof of why the return of bios is indeed a good thing:

Awesomely powerful and incredibly intelligent, DARK SCORPONOK was once widely feared by Decepticons and Autobots alike, unitl his chasis was destroyed by Megatron. His mind and memory shattered, only partially operational and powered by the might of UNICRON - some of which he managed to absorb - he hungers for a return to full fuctionality. Even in his partly destroyed state, his mech-venom sting andf super-strong claws are a threat to all but the most powerful beings, and his return heraldsa new era of fear for all who stand in his way

Well enough exposition, onto th review! Since this is a repaint, Ill mostly be discussing the new color scheme so check out reviews for E Scorponok for more in depth reviews on the mold itself). Also, sorry for the picture quality, my digital camera is actually an Olympus W-10 Sound Recorder so its not made for taking pictures :(

Scorpion Mode: In this mode, Dark Scorponok looks like a mix of a construction vehicle and a scorpion. Its really incredible the amount of detail the designers put in here. The unified color scheme of black, dark grey and gold along with smaller shades of copper, light blue and dark red looks a helleva alot better than Scorponok's color scheme which seemed to make an effort to include nearly every color of the rainbow (I love Scorponok btw but still it had to be said :D ). The light blue pieces are in the same spots as Scorponok (although upon further inspection, the blue used on Dark Scorponok is a shade lighter). When I first saw the blue on this figure, I thought a perfectly good homage got ruined but now the blue here really helps to break the Vehicle mode up a little bit 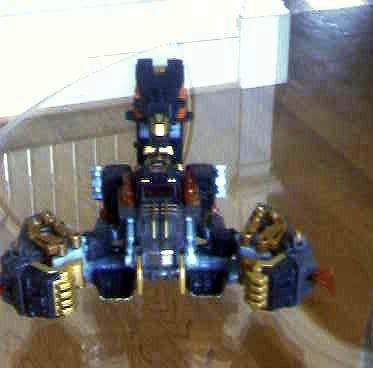 For this repaint, Hasbro went an extra step in doing a remold to the tail cockpit section to incorporate a Force Chip slot. Inserting Dark Scorponok's Jungle Planet Force chip into the slot activates the tail guns. The new part looks great and really helps Scorponok to blend into the Cybertron line more than the Armada repaints did into the Energon line. Only complaints are that the hook found on the end of Scorponok's tail is now gone (although the new cockpit looks sweet enough to overlook) and that due to the remolding, the guns are not transculent :( Also sorry to say, but the annoying as hell sounds did not get changed in the slightest so do keep a screwdriver handy for pulling the batteries out 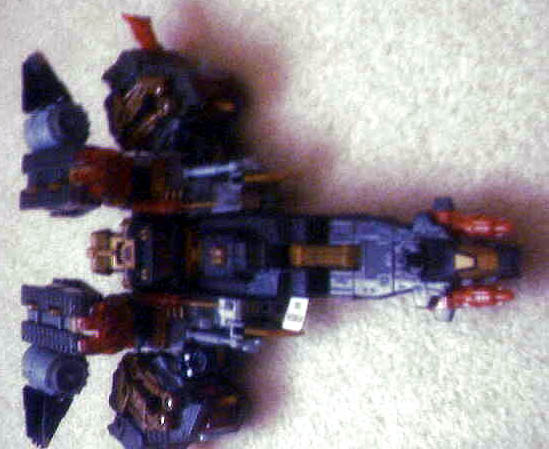 Jet Mode: Well it looks more convincing than Optimus Prime's Jet mode :D Seriously not too bad and the new cockpit does help some but otherwise not the highlight of this mold

Robot Mode Speaking of highlights, the Robot Mode is simply amazing in these new colors! Its amazing what unified colors can do! Kudos to Hasbro for tweaking the color scheme shown on the back of the box at the last minute so that most of blue parts shown on the back of the box here were changed to gold (basically, all the blue parts on Dark Scorponok are excatly the same as Energon Scorponok, see pic for where it got changed to gold). The color scheme while not 100% Black Zarak is pretty darn close, throw in a Skyblast spear and its almost a complete update! 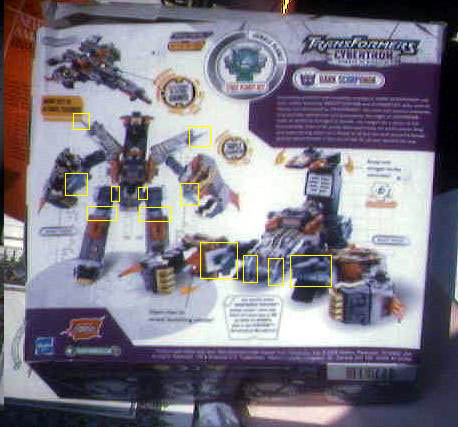 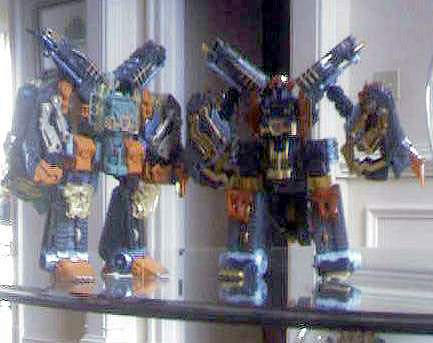 Also of note is that the translucent red of the visor does a MUCH better job of hiding Dark Scorponok's face as opposed to Scorponok's translucent yellow (which really didn't hide much of anything). The visor on mine is loose tho so it might be a case of mold degregation (nothing a little clear nail polish can't fix). Some proto pics (including a great gallery by TFans member Transfan2) showed Dark Scorponok's face to not have eye paint but fortunetly that is not the case on the final release as his eye paint is a sky blue and works well against the backdrop of his black face

Overall As hard as this may be to believe, this stacks up very well against the rest of the Cybertron line, particularly the Ultras (not that Scourge and Jetfire don't rock, but the limited posablilty on the former and the chest instablity on the latter are bummers). If you passed on Scorponok before due to color scheme, definetly pick this guy up (and ignore the back packaging picture, its highly misleading) as this mold is one of the best gems to come out in the past few years. If you already have Scorponok, the new color scheme and remold make this a very worthwhile purchase. On a final note, if you want this figure and see it in stores, DON'T HESITATE. Its shipping one per case until Ultra Wave 2 (which is supposed to hit in November but as we all know, new stuff usually comes alot quicker than that). While this figure might not be as unavailble as Energon Ultra Magnus (who it seemed shipped only for a few weeks before Hasbro released Wave 1.5). He is a one per case and with this scalper market around who knows, he could be the next UM, Cybertron Quickstrike or Alt. Decepticharge in terms of availability. Then again, he might also retain the fate of his precessor in being a huge shelf warmer too :D Either way fantastic figure 8/10 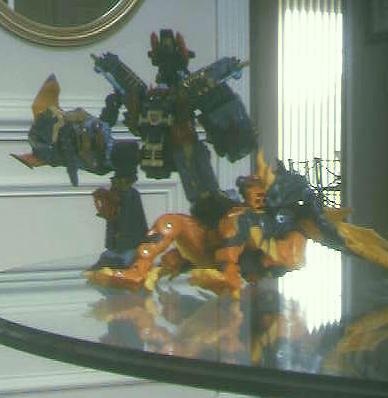