Red Alert is the first of the new "Cybertron Defense" line. If you have followed the television anime at all, Red Alert, Hot Shot and Scattershot got pretty well tore up by Megatron's puny but surprisingly powerful rail gun. They are subsequently revived by Primus and reformatted into the Cybertron Defense team. Their purpose is to protect Cybertron from both the black hole and the onslaught of Terrorcons invadin the planet. Red Alert is the first of the 3 to appear... at least in my area. 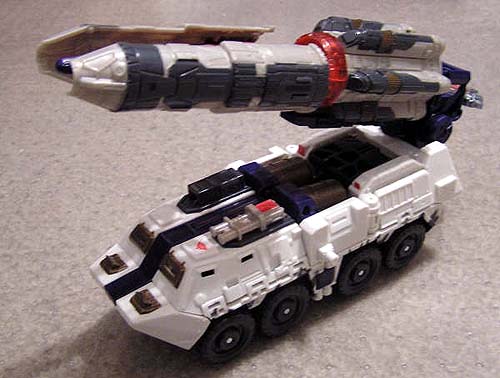 Red Alert's alt mode has been converted to an armored missile carrier. Although still a medic in function, he has been beefed up to defend Cybertron. Quite a beefup indeed, as he has grown 2 classes from Deluxe to Ultra. Just by the looks, you can tell that he is one tough bot to deal with now. And if the armor wasn't enough, there's the enormous rocket he carries on the roof. Overall, there is alot of nicely molded detail. However, I am somewhat disappointed that they left the sides for the most part uncolored. A little more paint on the sides would have made this mode outstanding. 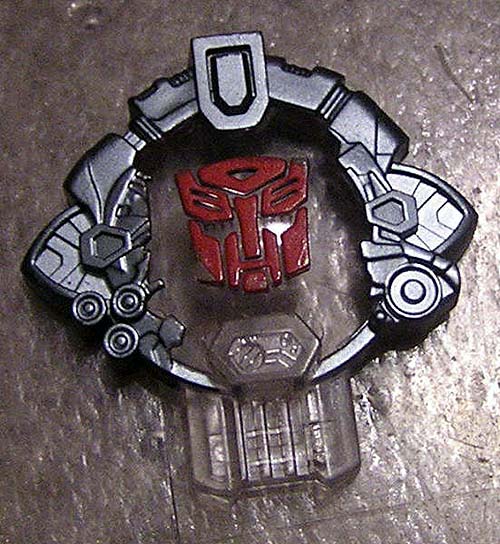 His Cyber Key is also changed. It now shows the Autobot insignia. Interestingly enough, it has the same basic design as Starscream's Deception Cyber Key. Also interesting is that Defense Red Alert has a different Key code on the back than his former Deluxe form. At any rate, insert the Cyber Key in the back and the nosecone of the rocket expands out to expose a smaller missile launcher. There is an accompanying tracking sound as well as a flashing light, assuming you fed (2) AA batteries into him. The launching sled sadly has no horizontal movement, but you do have vertical movement for Surface to Air attacks. 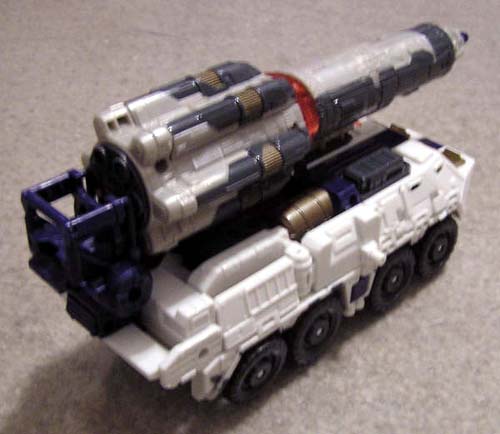 The smaller missile is spring-launchable. The larger rocket can be launched, albeit manually. When you do slide the rocket from the sled, launching sounds can be heard. The rocket itself is nicely detailed, including engine ports on the back. His transformation is real simple. The instructions say to remove the rocket while transforming, but if you tilt the sled back far enough it is unneccesary to remove the rocket.

His robot mode is much more pleasing to the eye in this form. Again, you get the feeling that he is armored to the hilt. Lots of nice detailing to go around as well. One interesting feature is that the sled can be positioned on his right or left shoulder, as it is on a sliding rail. Also note the attachment on his left arm (which is also interchangeable to fit his right arm). I will go into more detail on that later. Contrary to what one might think, he has great balance. He is also very poseable. The only weak point is that he has no horizontal movement on his shoulders. 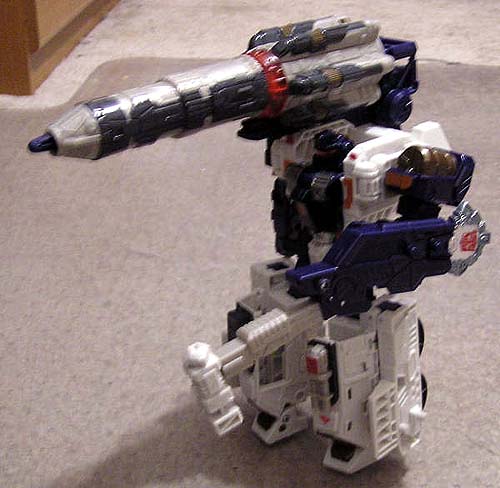 The Cyber Key works the same way in Robot mode for the rocket. However, he now also has a Cyber Key function for that attachment on his arm I mentioned earlier. Insert the key on the back of the attachment and a barrel flips out. With the barrel on it's own, it can be an arm cannon. One carryover from his Deluxe form is for his arm attachments. 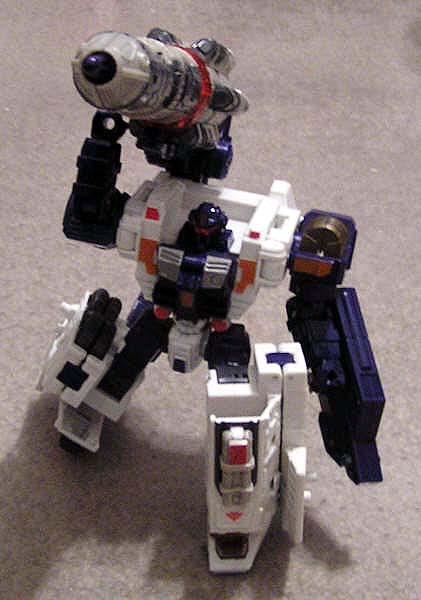 Flip out the panels in front of his legs and you will find his claw and hammer attachments. These fit onto the peg of the Key activated barrel. Too bad there's no way to lock the barrel to the attachment, as the weight of the tools weighs the barrel down. Overall, this is exactly the way a revamping of a character should be done. There is enough left over to instantly recognize the character, yet lots of new things to discover. Whoever thought of the Defense line should get a promotion. This is perhaps one of the best things that could happen to the Cybertron franchise to keep it going!