From my glancing knowledge, Longrack was originally part of the Beast Wars continuum. At that point in my life, I wasn't following the TF line at all so I don't know for sure. However, Longrack is now part of the Cybertron line remolded from Armada Hoist. He is assigned to Cybertron in an attempt to rebuild the planet. 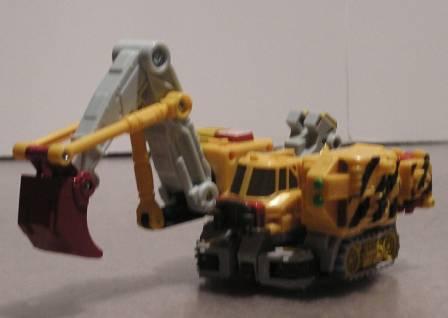 Longrack assumes the alt mode of a shovel. There's a few subtle differences between Armada Hoist and Cybertron Longrack. For one, Longrack is a brighter white, while having rough brown striping on the bodywork. I assume this is to pay homage to his BW era. It works out very nicely on this figure, though. There are also red accents here and there. The lower part of his body is predominantly grey. Also, while he retains the 2 minicon ports on his left side, the ports on the right side are now non-existent. He does, however, retain Hoist's ability to rotate his cockpit a full 360 degrees. 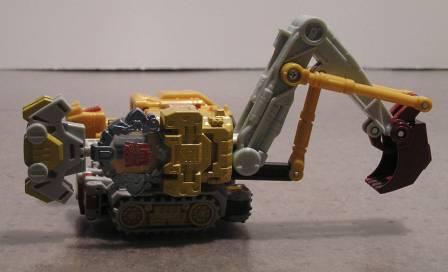 His Cyber Key is an Autobot key with no planet allegiance, which seems to be the way for those stationed on Cybertron. Note that the back of his shovel side has a rather large piece of bodywork where a minicon port once stood. Once you insert the Cyber Key into the slot at the rear of his shovel, then push against that bodywork, his "Crushsteel Punch" function is activated. Sounds cooler than it really is, as it just pushes the shovel forward, then spring retracts back. I liked this figure back in Armada because of the Alt mode, and my mind isn't changed much here. 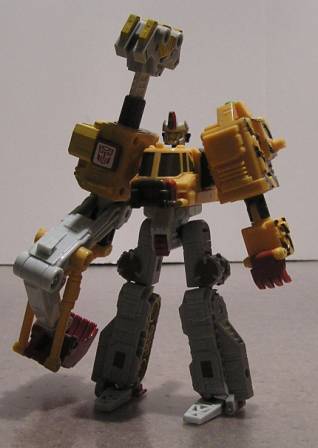 I have to say his robot mode, while basically the same as Hoists, looks much better this time around. I think it's mostly due to the colors given to this figure. I also think it has alot to do with the head mold. Where Hoist had a small and rather grumpy looking face that was blue, Longrack's head seems to fit this body a whole lot better. 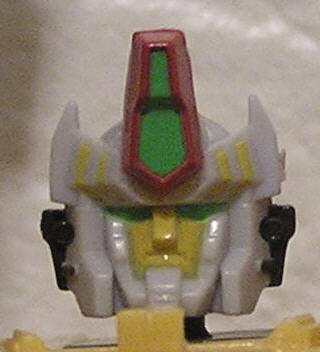 By the way, if anyone can tell if Longrack's face is correct to his BW form, please post it in the feedback... I'd be interested to know. His poseability is the same as Hoists, which is fairly good. The only cripple is that his feet fold out at an angle, so unless you keep his legs spread out a bit, it won't look right. 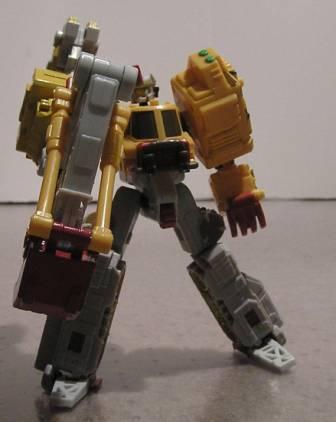 The Cyber Key function works the same here as in Alt mode. It's hard to get a pic in without actually holding it down (and I hate figure shots with hands in the way) but it extends his shovel arm out about 1-1/2". On the Autobot side, the 2 remolds of Armada figures have been worth getting. Longrack in particular surprised me as a mold that didn't change much, but showed ambient improvements. I'm not as confident with the Decepticon remolds, and will probably refrain from purchasing them.