Scattershot is the 2nd in the 3-figure Cybertron Defense series. He, like Red Alert and Hot Shot, took a pounding from Megatron's rail gun and was reformatted. In Scattershot's case, he became a missile tank. 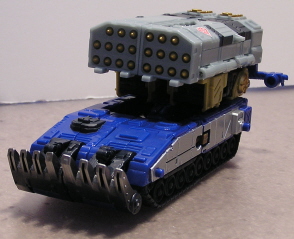 This missile tank is a pretty beefy machine. There are no less than 22 warheards built into the launcher. Sadly, none of them are launchable. Scattershot retains his basic color scheme, although growing 2 classes to a Voyager. Instead of a halftrack, he is now a full blown tank. He, like Red Alert, now wears the Defense (or Vanguard) autobot symbol. 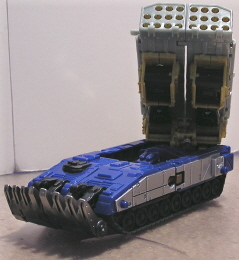 The missile turret is quite moveable. It ratchets up to 360 degrees horizontally and can vertically lift up to abotu 60 degrees. However, moving the turret exposes the only gripe about this mode... the kibble. You can clearly see his legs and head once the turret is raised. They could have done better with a Voyager figure in my opinion. You might note from the pics that is gun is holstered in the back. There is no real place to put the gun in a useful position, so I decided to utilize a screwhole to have his gun in a transport mode. You do have to wonder why he'd have to have a gun considering all the firepower he now possesses. 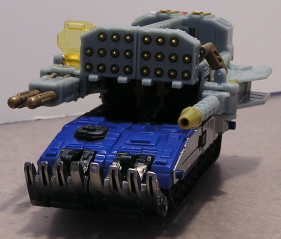 Speaking of firepower, his Cyber Key function unlocks 2 other methods of firepower. The key is a Autobot key, similar to Optimus Prime's. Inserting the key in the right side of the launcher flips out a target scope. Then, slide the lever on the side forward to reveal 2 launchable missiles. Insert the Key in the left side of the launcher and a cannon flips out. This is definitely not a bot you want to get upset with you! Transformation is simple to the point of virtual straightforwardness. Instructions are almost not needed. 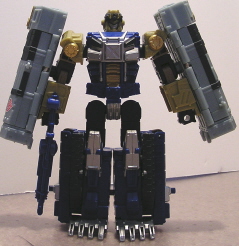 His robot mode is just as stunning as his new alt mode. The missile launcher splits in 2 and each half is molded into each arm. Besides that, he retains his same basic look, albeit more beefed up. A definite plus is that his face is more defined. He is a very poseable figure, and almost all of his joints are ratcheting so they will keep their place. 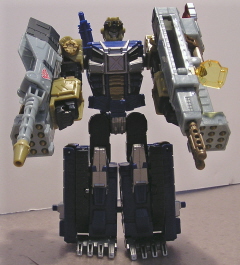 They Cyber Key modes work the same in robot mode, albeit switch sides. Because of the way the Key activates, you can't use his handgun when using both Key modes. I remedied that problem by utilizing another screwhole and making a gunsling of sorts. Forgive the kibble in alt mode, and you have an amazing figure. So far, the Defense line has not disappointed. Now the wait for Defense Hot Shot begins... 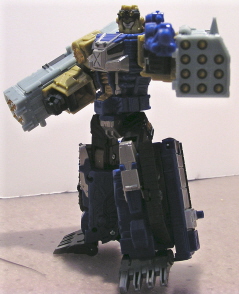