Hot Shot is the last of a 3-figure Cybertron Defense set. So far, this has been a highlight of the Cybertron line. However, you do have to wonder how Hot Shot, a racer who is always trying to be the fastest in the universe, would make out as a defensive vehicle. 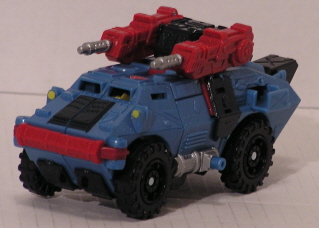 His alt mode is now an armored transport vehicle. He retains his mostly blue colors with red accents. On the roof, there are 2 gun barrels on what looks to be a turret which can rotate 360 degrees. The turret can also be positioned towards the front or towards the back. There is no evidence of kibble in this mode, which is a plus. There are also 2 minicon ports, one on either side of the vehicle. The detail is pretty nice as well, with external fuel tanks and front bumpers. Speaking of the bumpers, they can pull apart to expose 2 front mounted cannons with 8 warheads along the grille. 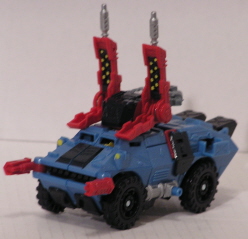 The Cyber Key is like the other 2 defense figures and Hot Shot also inherits the vanguard Autobot symbol. Insert this in the back of the gun turret and the guns flip up exposing 16 more warheads. Transformation is almost identical to his original form, except there is no cockpit to rotate. 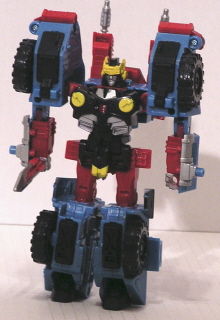 His robot mode is pretty similar to his original mode. You can instantly tell that this mode is beefed up though. One addition to his already impressive arsenal is a combat knife that is stored between his legs in Alt mode. It's a nicely detailed knife and, according to the bio, a knife Hot Shot learned to use from Brakedown. You have a choice of positions for the roof mounted guns. You can either have them pointing upward like the instructions show, or you can have them resting on his shoulders. Posing is also improved for this figure, since there is no cockpit to intrude on leg positions. 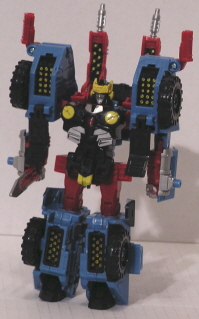 The Cyber Key mode works the same. What is most impressive about this model is that he has even more hidden arsenal in Robot mode. You can still flip up his upper shoulder panels to expose the 2 guns and 8 warheads. Of course, they would now be useful only for surface-to-air combat. But there are 4 more panels that can be manually opened. There is one on each shoulder front and one on each shin. The shoulder panels flip down, while the shin panels flip over like a trap door. Once you have the Cyber Key enabled, the shoulder guns released and all 4 panels opened, there are no less than 82 warheads ready to launch (14 on each leg, 15 on each arm, 4 on each shoulder and 8 on each cannon). That's a load of artillery!! What he lost in speed, he definitely made up for in firepower. 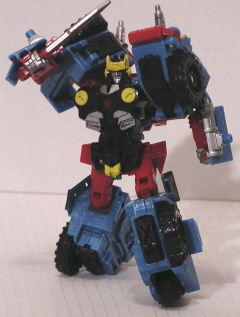 Sadly, this is the last of the Defense line. To me, this has been the single greatest upgrade I've seen in the modern TF line. It's unfortunate they didn't continue with other characters in this fashion. Personally, Hot Shot ranks the favorite of the three released.