Surprisingly, there have been several US exclusives with the Cybertron line. For the most part, these exclusives have been of exceptional design. Now, Hasbro brings us another exclusive with Downshift.

Downshift takes the alt form of a muscle car. It's a dead ringer for a 1971 Plymouth Barracuda, from the lime green and black paint job to the shaker hood and the simulated velour roof. There is even some limited detail in the cockpit area. However, in case you thought this was only a car built for speed, there is a peg port on either side of the quarterpanels. This is to mount the missile launchers, complete with launchable missile. Note that the each launcher also has a minicon port.

To insert the Cyber Key, there are 2 steps. First, you must flip up a panel on the rear window. You can tell where this panel is, but it can be somewhat hard to get open unless you have a toothpick or fingernail. Once the Key slot is exposed, insert the Key and an energon claw pops out of the grille. There is also what appears to be a cannon in the center of the claw. Transformation is pretty simple and the head pops out automatically. 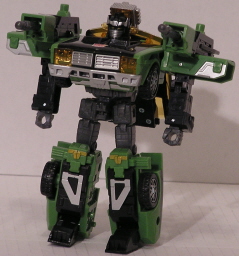 The robot mode is a pretty nice one. The head in particular keeps the Downshift (or Wheeljack to the US) facial heritage afloat. The missile launchers from the rear can serve one of 2 purposes in Robot mode. You can either have Downshift hold the launchers in his hands, or you can clip the launchers to his shoulders. Posing does suffer from 2 minor problems. First, the head is fixed to it's position, so it can't be rotated. Second, the cockpit hanging from his back can limit his leg posing slightly. 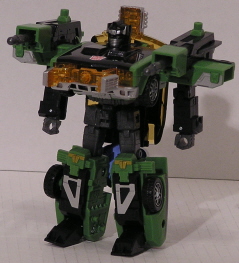 His Key mode works the same in Robot mode. Although the claw wouldn't be too useful except for close combat, the cannon in the middle could be put to good use. Kudos to Hasbro for putting out another fine exclusive model for the US buyers. 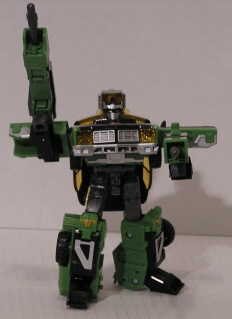