It's not very often that you find earth type motorcycles in the TF universe. It's even rarer to find a motorcycle TF that can translate into both a great alt mode and a great robot mode. One such model has been resurrected for the Cybertron line. Lugnutz is a mercenary that could perfectly fit in with the Hell's Angels if you believe his bio. 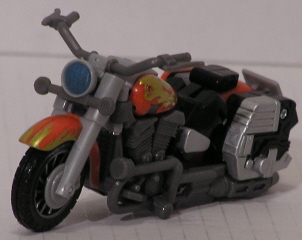 Lugnutz's alt mode is a road bike. The alt mode is done pretty well, complete with twin pipes and a V motor. The orange and flame paint job looks good on his as well. He is detailed fairly well and even has a Decepticon license plate on the rear. 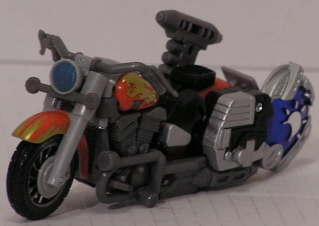 His Cyber Key has a 2 in 1 type function. Insert the key to the right of the rear fender and his tailpipe flips back 180 degrees. This exposes a battery of 3 molded missiles. This also turns his tailpipe into a rocket for boosted speed. Not a bad gimmick, but one that does require a little imagination. Transforming him isn't too hard, but it might take a time or 2 to get right. 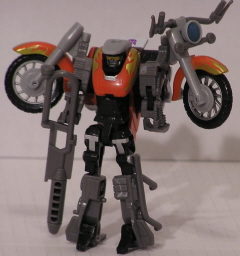 His robot mode unfortunately isn't as nice as his Alt mode. He has very skinny legs and the footing does nothing to adress his back heaviness. So although he has good posing capability, it's very hard to get a pose in without having severe balance issues. The effect of having the wheels stick out his shoulders is nice, but it also limits arm movement. His left tailpipe becomes his gun, which he has named "Dutch". Dutch looks like a trombone handle more than a gun, and since it's so long this further limits his arm poseabilty, basically cutting off any elbow movement. His head is a decent mold, but is fixed. 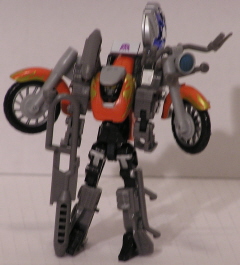 Using the Cyber key still flips up the missile battery. However, unless you're wanting to BBQ something behind you the rocket function is pointless. Unfortunately, the key also adds to the weight imbalance. In my opinion, Energon Arcee provided the best balance of an earth type motorcycle between alt and robot modes. Lugnutz has a very nice alt mode, but his robot mode is lacking. 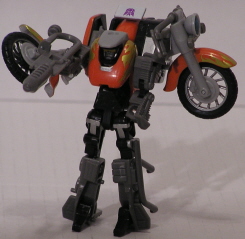