With the 2nd wave of 6" transformable Titanium figures comes 2 figures. One Autobot, one Decepticon, just as in the 1st wave. This review is for the Autobot Jetfire. Scientist and former friend to Starscream, Jetfire felt betrayed when Starscream joined the Decepticons. At first, he was neutral to which side to join. However, after seeing the sheer carnage that the Decepticons waged, Jetfire quickly joined the Autobot cause and has spent every fighting moment locked in combat with his former friend turned deadly enemy. 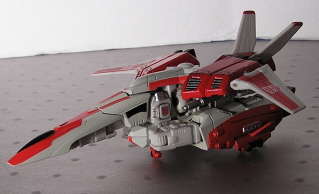 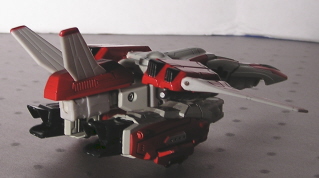 Jetfire's alt mode resembles Don Figueroa's War Within design. However, this figure is not referenced as such. It might possibly be due to the fact that we never really saw the alt mode in the storyline. At any rate, overall it's a decent design. However, there is just way too much kibble in this mode. For one, the head is clearly visible on the port side of the jet. The legs also are clearly visible on either side. He has a laser rifle mounted on each wing. This rifle is made of the familiar "permaform" rubber, so one of the rifles had a right lean to it. 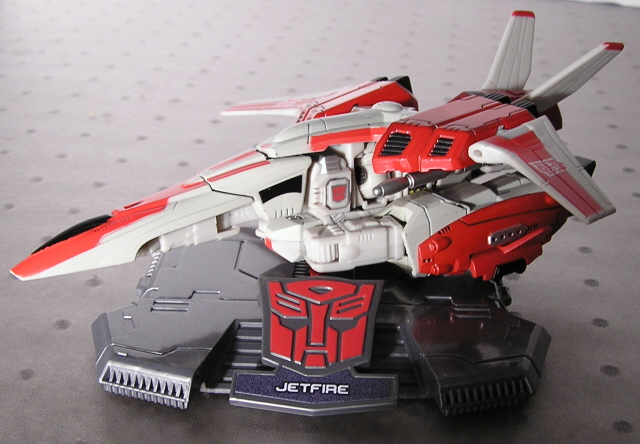 Like the other 6" figures, Jetfire comes with his own base. One other note about the Alt mode is that due to the chest design, the cockpit and wing section might want to lean starboard. Fortunately, the cockpit locks in place to fight this effect. Mine, however, still tried hard. The transformation is relatively simple. The wing section comes off during the process. The tail section also comes loose so you can expose his left hand. 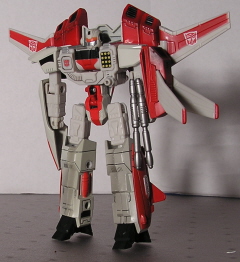 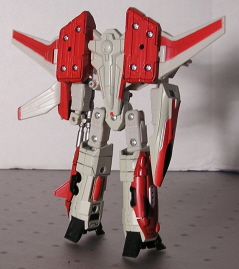 His robot design is also an interpretation of the War Within Jetfire design. It also retains some of the original G1 cues from the Bandai toy mold, the feet in particular. The lasers on his wings can detach and form a rifle in each hand. You can also combine both muzzles into one 2 barrel gun for one hand. The only real sore spot in the design is that you can clearly see his front landing gear in his abdomen, like it was an afterthought. 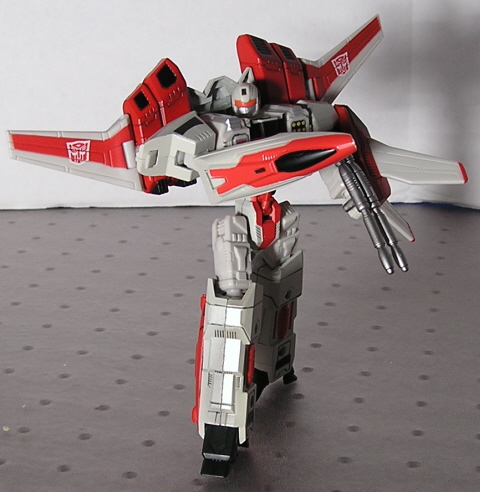 Most of the joint issues that plagued the first wave figures seemed to have been rectified with Jetfire. He was able to hold most of his poses pretty well. One very annoying trait, though, is that his wing section can never seem to stay in place. If they had put a rubber grommet in the connection point, it might have held on better. As it is, the wing section keeps wanting to drop off. It gets extremely tiresome after awhile. So far, the Titanium 6" line has had lots of hope but weak execution. Perhaps if they used plastic instead of diecast these might have been better. As it stands, however, it just doesn't quite inspire the right impressions.