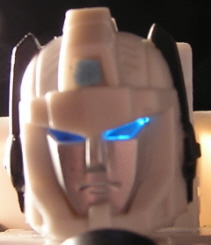 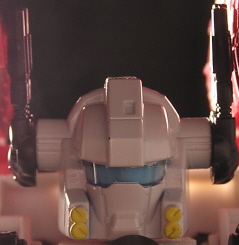 "Victory lies in the conquest of unknown mysteries"

In the beginning, Jetfire was the product of Macross technology. Bandai allowed Takara and Hasbro to use some of their molds for the Transformers line back in 1984. One of those products was the VariTech fighter from Macross (or Robotech for the Americans). Interestingly enough, Hasbro blended him with a humanoid face into the animated series and renamed him Skyfire. Jetfire from the G1 era remains one of the most sought after and favorites from the Autobot legion. Jetfire has appeared in every series since Armada and now makes an appearance in the Classics lineup.

Jetfire's alt mode is that of a military jet. The design in essence updates the VariTech look. Almost everything that Jetfire was back in 1984 remains. This includes the color scheme of white with red and black accents. All the wings are adjustable, from the fuselage to the tailwings. The engines in the rear also double as his feet in robot mode and retain the split port look. One nice plus is that he has fully retractable landing gear. The rear wheels fold up into his belly, the front wheel folds into his nosecone. There is a rubsign on his left wing. 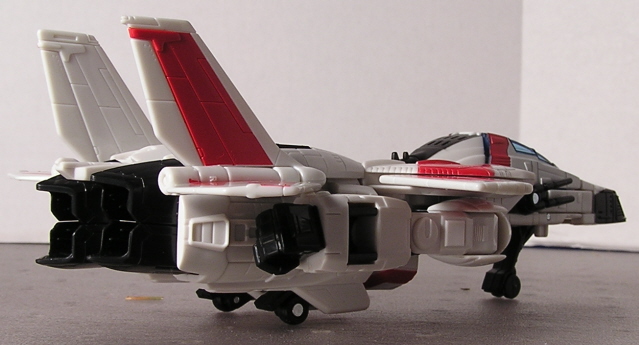 There are only 2 things that take away from the look. One is that the large ports for attaching his armor are left showing. His arms are also visible from under the wings. It's too bad they couldn't find a way to retract the hands or else it wouldn't really matter. As it is, this is only a minor quibble. Overall, the look is very sharp. 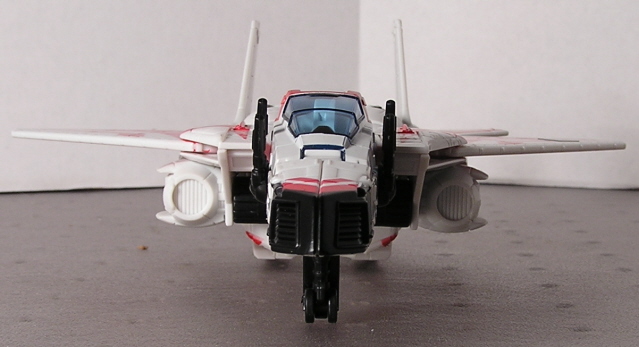 Looking at the front of the jet, there are a pair of double-barreled laser turrets. They have full 360 degree rotating ability and can be independently aimed. As impressive as this jet looks stock, it looks even better when armored up. 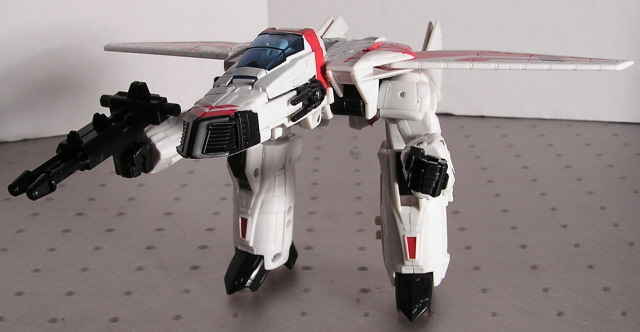 For the Macross fans, there is a way to give Jetfire a Gerwalk mode. However, the nose makes this mode front-heavy and it's almost impossible to keep it standing without standing him at a slight upward slope. This obviously isn't an official transformation mode. To convert Jetfire to Super Alt mode, you only need attach his armor and flatten his tailwings.

With his armor on, Jetfire possesses alot more firepower. His hands become less noticeable as they hold a laser cannon in place. On either side, he is armed with a launchable missile. 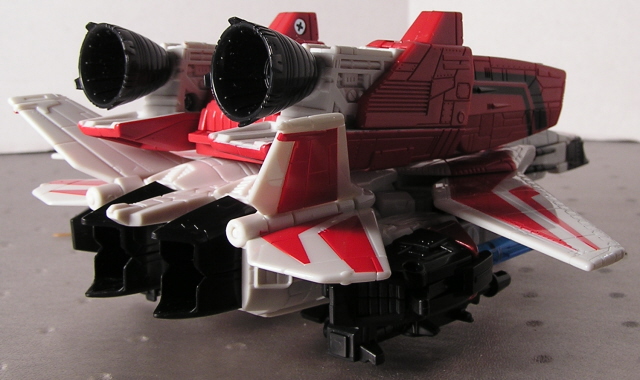 On top is his booster pack allowing him suborbital and interstellar flight. The armor also retains the Macross look. In fact, one might wonder if some reverse engineering might take place between HasTakTomy and Bandai. Maybe this will be an updated VariTech... who knows. 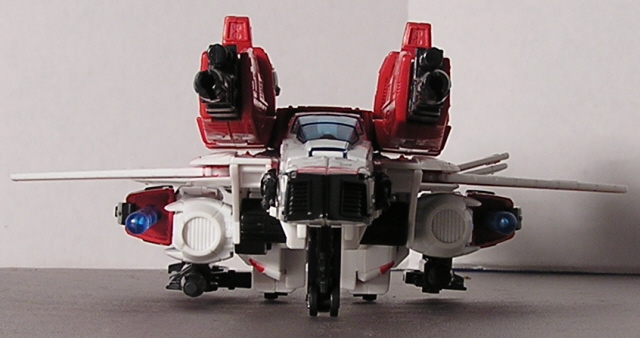 By sliding the top plate on the booster packs back, 2 more laser cannons flip over to the front. That makes 8 laser barrels and 2 missile launchers in total. Jetfire can be transformed both with and without the armor in place. The transformation is trickier than it looks, but is easily figured out. 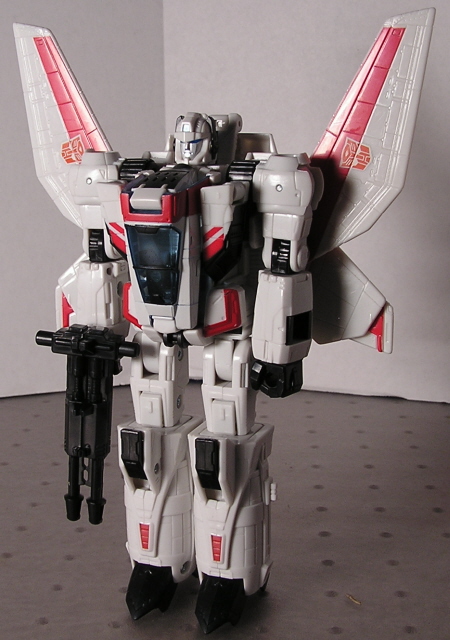 Jetfire's robot mode is very faithful to his animated G1 look. The laser barrels that attached to his hands in the Super Alt mode can combine to form his double barrel laser rifle in Robot mode. The face is very nicely done and includes blue piping ability. 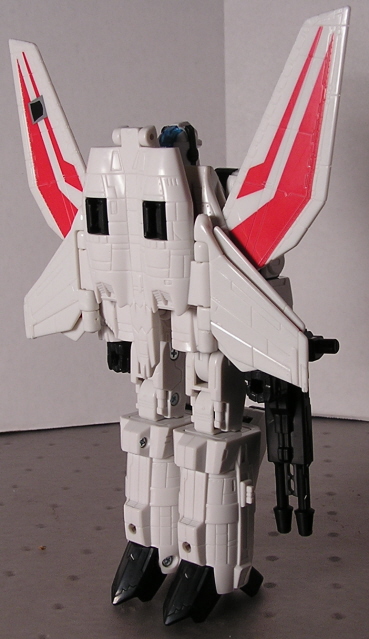 The rear wings don't fold over on themselves like the G1 mold did, but you can either lay them flat or keep them hinged back. It's a matter of personal choice in the end. 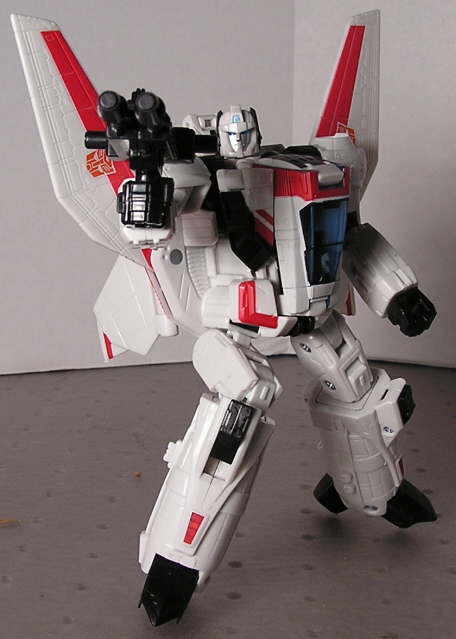 His posing ability is excellent. All of his joints are pseudo-ratcheting so they hold well. The one oddity is that the horizontal swiveling is located below the knees and the elbows on this mold. On most others, the swivel is above. Therefore, you might not get all the poses in you like but you can get pretty close. The head has vertical and horizontal movement, which adds to his posing strengths. 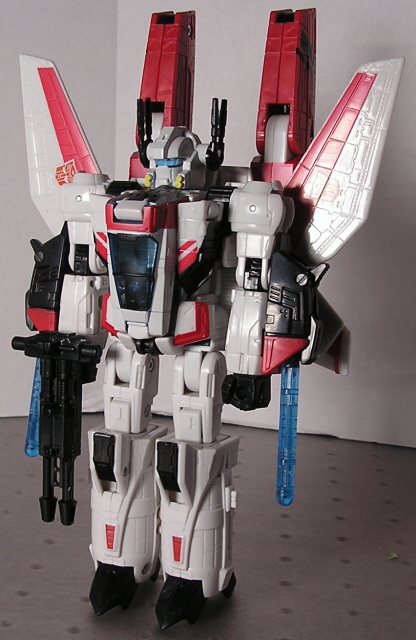 By attaching his armor on, you form his Super mode. His helmet slides over his head. This is incidentally how the helmet is stored while in Alt mode. Note the 'antennae' also form the turrets used on the nose of the Alt mode. Prior pictures showed this mode being somewhat portly looking. While the helmet does give off that image, in person it's not as chunky as it looks. 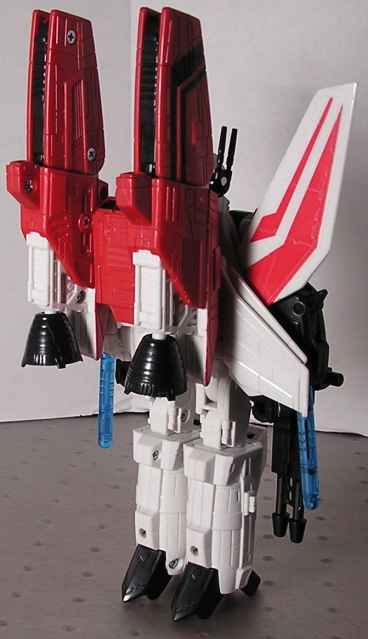 One weakness in this mode is that Jetfire becomes back heavy. Therefore, posing becomes somewhat restricted. Other than that, movement itself is not hindered by adding the armor on. 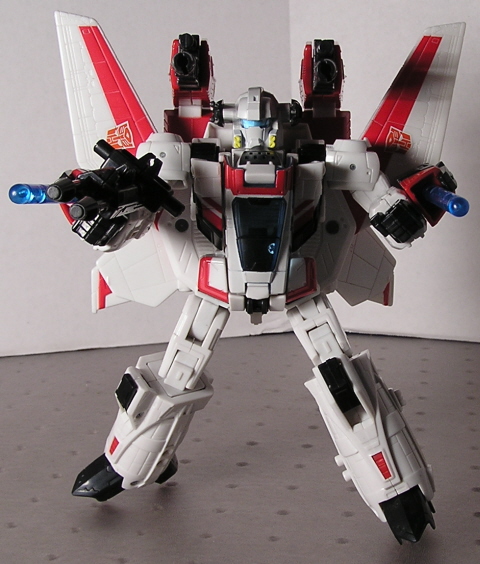 You can extend the gun turrets then fold them over 90 degrees to add shoulder cannons to his arsenal. This, by the way, does help regain some of the lost balance. Jetfire's look has let some fans down lately, especially in Energon. With this new Classics mold, Jetfire gets the treatement he's needed for a long time. While there are a couple of minor bugs with the figure, overall it's a stellar addition to the lineup.