"Mud slinging is our job, and we love a job well done"

Seems the Decepticons have picked up some more ground support lately. The new batch of minicons include the Dirt Digger team, which is an espianoge team that enjoys spreading rumors to torment their enemies.

Oil Slick best resembles an early 70s muscle car. His color scheme is orange with a purple flame job on the front end. He sports a Decepticon insignia on his roof.

His minicon ports are located under the front end. While his grille has nice detail, he has nothing but holes on the rear end due to his transformation process. While the hood seems a bit long, overall this is a pleasing design. Transformation is simple to accomplish. 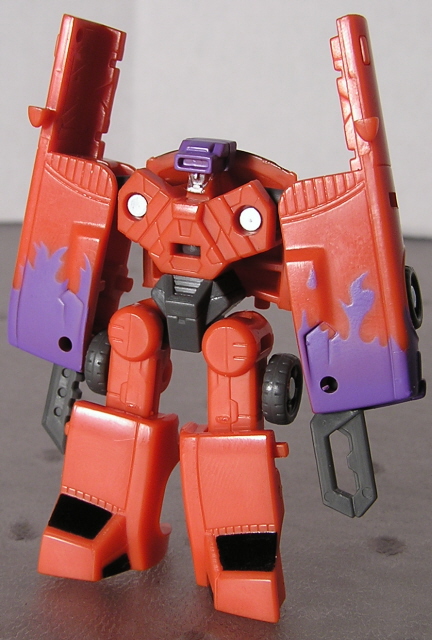 Oil Slick's robot mode is intriguing. The rear end forms his legs and the front end forms his arms. He retains his purple and orange color scheme, with some black showing up in the limbs. 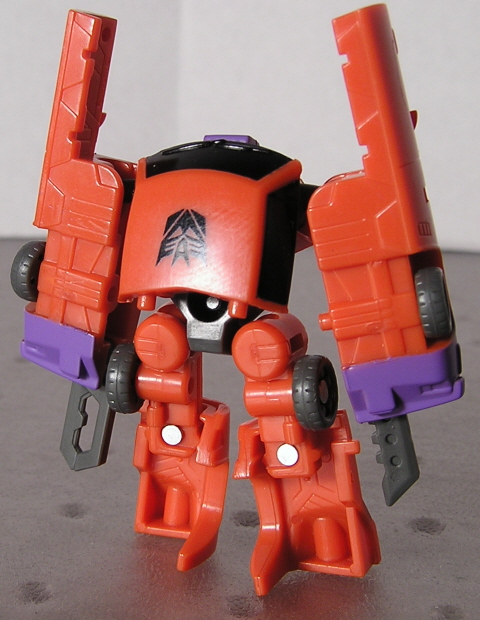 His "hands" consist of a serrated saw on the right arm and a claw on the left arm. Sadly, the claw is molded and not jointed. The head sculpt reminds me of Armada Bonecrusher with the "Cyclops" type visor. While the chest is rather plain looking, overall this figure is nicely done. 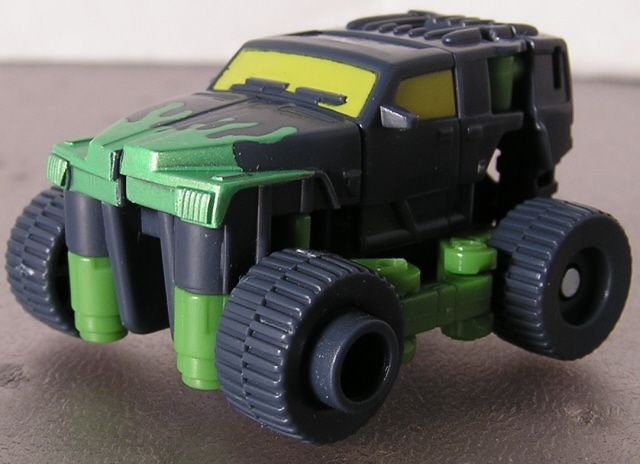 Grindor seems to have beefed up and switched sides since his last offering. He is a monster SUV with a black paint job and a green splash paint job on the hood. His drivetrain frame is also green. Like Oil Slick, his insignia is also on the roof. 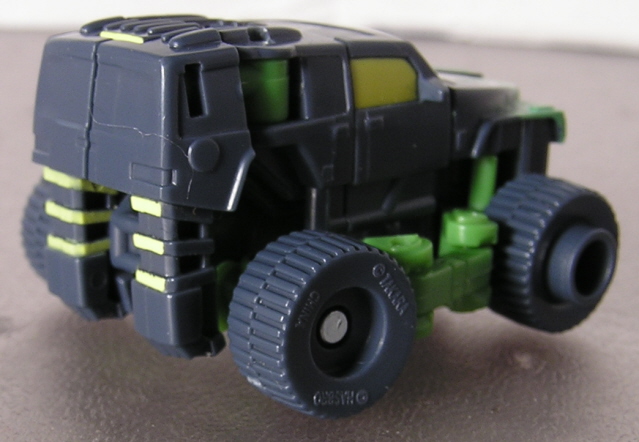 Grindor sports 2 minicon ports, one under each front wheel. He has some nice detail, including wiper blades on his windshield. However, the back end does have some holes which takes away slightly from the overall good design. His transformation is unique but easily executed. 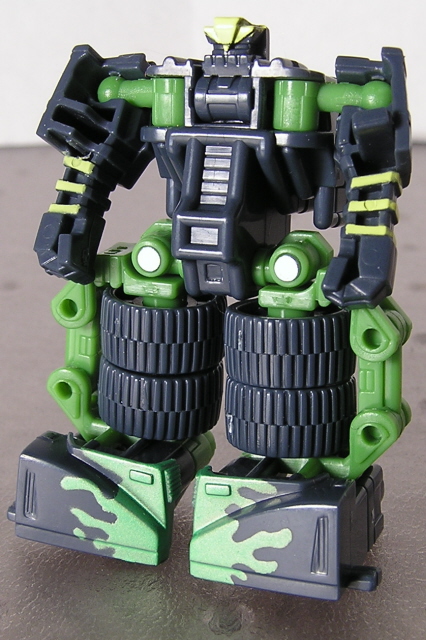 Grindor's robot mode is done very well. The 4 wheels fold up on each other and form his legs, with the front end forming his feet. These feet make the figure extremely stable when standing. The rear end form his arms, complete with molded fists. 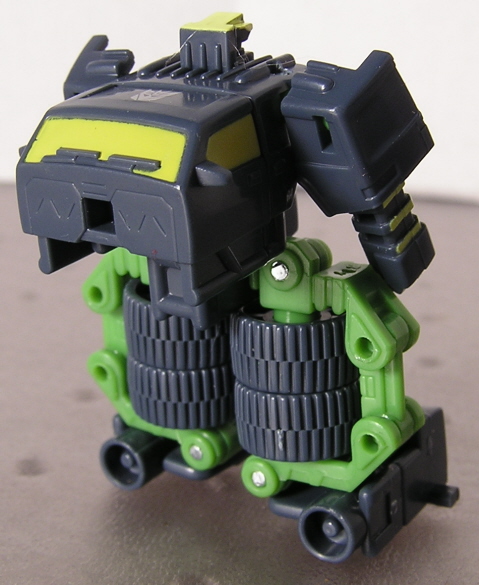 Interestingly enough, someone forgot to flip up his head when taking a pic of his robot mode for the card backing. He actually has a nicely detailed head sculpt. If there's any niggle with this figure, it's that the arms are sometimes caught on the extra linkage on his legs. Other than that, this is perhaps the best of the 3 units. 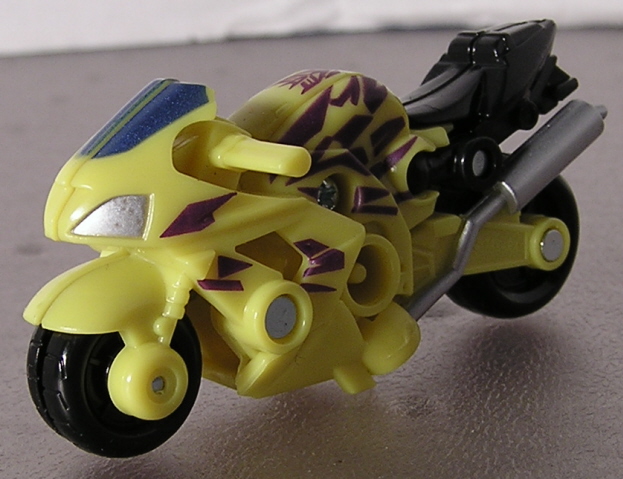 Dirt Rocket is, interestingly enough, a "crotch rocket" as well. The racing bike features a yellow pain scheme with purple graffiti accents. There is a Decepticon insignia on the fuselage. The tires are wide enough so that the bike can stand on it's own, something that has been lacking from previous minicon bike designs. 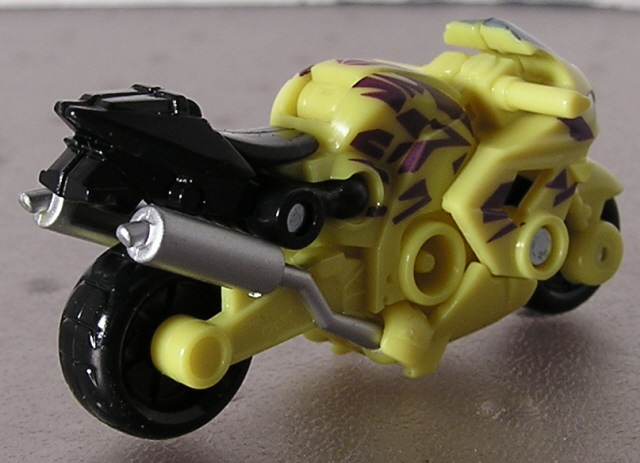 There are minicon ports on either side of the bike. There are alot of accurate details on this mode, including the twin pipes, the dual headlights and the handlebars. Transformation for this figure is easy. 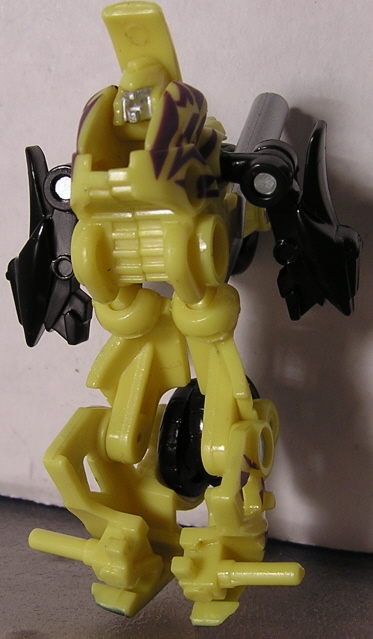 Dirt Rocket's robot mode left me a little disappointed. The front end becomes his legs and the fuselage forms his chest and head with the seat becoming his legs. However, between the narrow footprint and the rear wheel hanging off the back, this figure is very hard to hold a pose with. However, I do find if you rotate the legs 180 degrees, the figure becomes more stable. 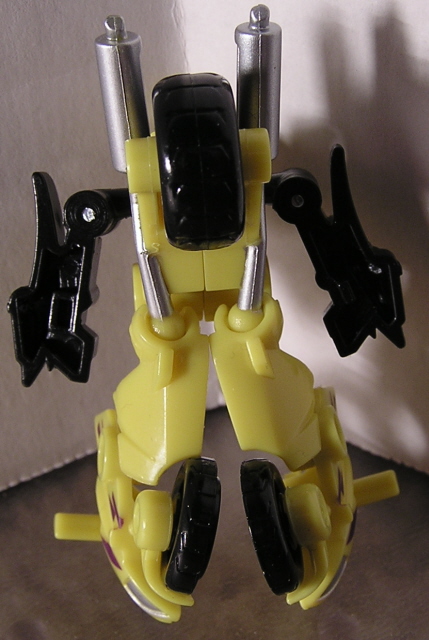 Still, there is some good detail. Having the pipes hang behind his head gives the figure a good look. There are also molded fists on the arms. If they had given more thought to the feet, this would have been a great figure. As it stands, the Dirt Digger team is one of the better minicon offerings currently available in the Classics world.