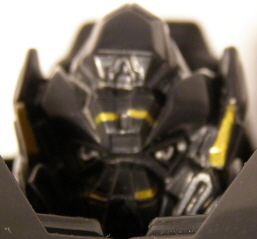 As most anyone that follows the TF universe knows, there is a movie coming up this summer. As with most movies that are supported by a line of merchandising, product starts cropping up a month or so before the movie release in order to 'wet the palate'. Although not released yet, I was fortunate enough to be sent final prototypes of 2 figures coming from the Fast Action Battlers line. This review will look at Ironhide, Optimus Prime's old friend and trusted warrior. 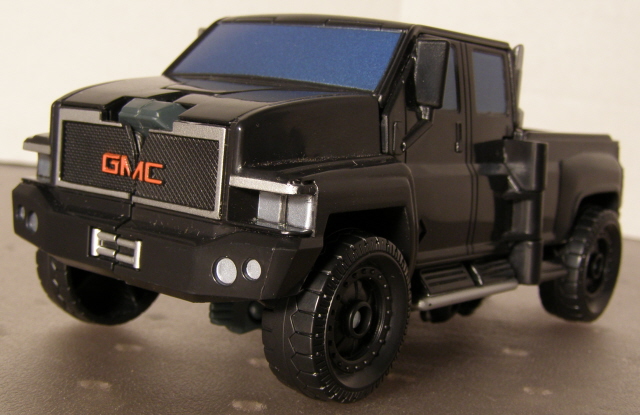 Ironhide's alt mode is a GMC Topkick custom 4-dr with pickup bed. The figure is all black, with blue painted windows. The red GMC logo sits proudly on the front grille. There are twin vertical exhaust stacks behind the cab, 2 sets of foglights on the front bumper and a rather plain looking rear end with painted taillights. The pickup bed is molded closed, like a permanent tonneau cover. 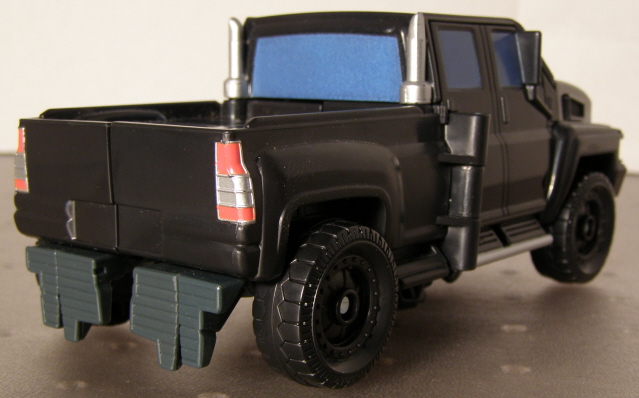 The figure is sized around the deluxe class, but the mechanics will make you think it's a basic class. While overall the details are well done (such as the mesh grille, running boards and bumper winch), other surface nuisances come up (like the visible hinges behind the rear doors, the footprint sticking out from the rear bumper and the gaudy hinge on the front of the hood). Transformation is very simple. Both doors on each side peel backwards and the rear end splits in 2 then flips forward to become the legs. The skidplate flips up to become torso armor. His arms are located in the cab and rotate forward. Finally, in a unique approach, the hood breaks away at a diagonal to reveal the head. 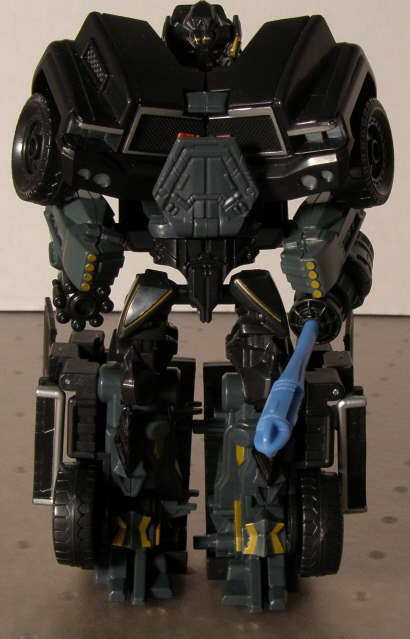 His robot mode isn't too bad looking. A lot of color comes out in this mode, including royal blue and gold. True, the Ironhide everyone is thinking of (c'mon, you know you have G1 Ironhide in your mind) is red, but this actually comes off looking very nice. If this is a preview of what the Voyager class Ironhide will look like, I'm impressed. 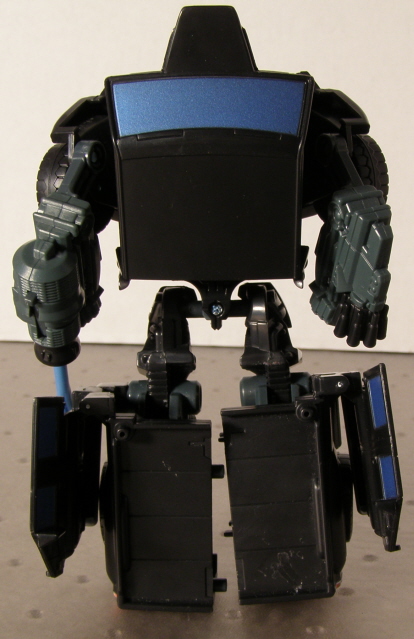 The detailing is done quite well. He has a 8 barrel vulcan cannon on his right forearm and a working missile launcher on his left arm. A blue missile is included, but sadly the missile has no home when Ironhide is in Alt mode. He also has molded fists. If you're wondering about articulation.... forget it. The legs have limited joints, although the knees have a very good range. The elbows are bent at a permanent 90 degree angle. There is fore and aft movement at the shoulders due to his transformation, but that's it. His head could move if not for the hinges that hold his alt mode roof on.

Now for the gimmicks. The first gimmick, being the missile launcher, has been discussed. Ironhide does have another feature. If you hold his torso and twist it to the right about 90 degrees, then let go, he will spring back. I guess you could call it punching action. There is no lever for this, so far as I can tell. Overall, this isn't a bad figure. As of yet, there is no official retail pricing from Hasbro, but anything over $7 for this figure would be a gouging in my opinion. Score is based on the figure being at $7. Deduct a full point for every dollar above that.