“That’s no moon… that’s the frickin’ Death Star!” … Okay so Obi Wan didn’t really say that when he first set his eyes on the Death Star but I sure did when I saw the toy at Toys R’ Us.

I must first state that I have seen the other Star Wars/Transformer line but have mostly scoffed at the majority of the figures due to the strange proportions and the generally odd look most of them have in robot mode.

This new incarnation of Vader however, literally took my breath away! But I’m getting ahead of myself. On to the review!

The Death Star comes in a huge box, with all the trappings of a typical Star Wars toy. The box itself is probably big enough to hold 4 copies of the actual toy in Death Star mode or 2 copies in its robot Vader form. The Inside of the packaging is reminiscent of the décor in an Imperial space station and could possibly double as a diorama backing for the rest of the line. 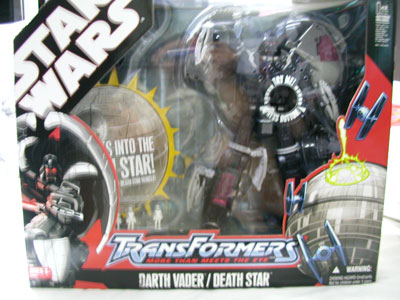 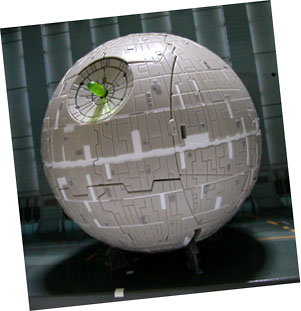 The Death Star mode is a spherical shaped space station. Unlike its actual movie counter part, this version of the Death Star is actually complete.

It’s basically a smaller version of Cybertron Primus without all the guns and cannons sticking out. The major color in this mode is grey with minor white highlights.

There’s a lot of detail on the surface of the Death Star, representing the trenches found on the actual Death Star. The towers and the turrets shown in the movies aren’t represented on the toy itself but over all it’s a relatively faithful rendition of the real thing.

The main cannon (the one that destroys planets) comes in the form of a spring loaded green missile that can be fired by opening the top of the Death Star and depressing Vader’s head. There’re 2 concealed compartments in this mode that hold the 3 Tie fighters and an additional feature that I’ll explain a little further in the robot mode. 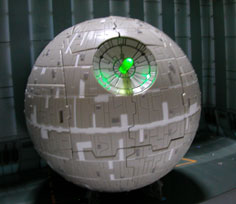 Pushing a button at the back of the figure in this form activates the lights and sounds. The sound effects are very accurate and are sure to bring a smile to your face as you picture the planet of your choice blown to smithereens.

There’re 3 different phrases in this form. All the sounds are accompanied by great flashing green lights around the main cannon area and the patented Vader breathing sound. 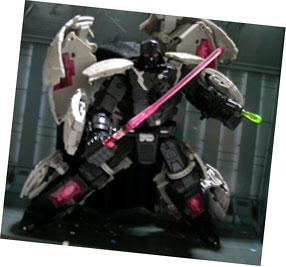 Lord Vader stands at an imposing 11 inches (he’s a tad bit shorter than MP Convoy). If you include the height of this shoulder pads his total height is about 13 inches. Transformation from alternate to robot mode is not overly complicated and rather satisfying. Black becomes the primary color in this mode, with silver accents on the body and waist.

Upon closer inspection you’ll realize that some parts of the black on the figure actually contains some kind of faint gold glitter in it enhancing the look of the figure!

The majority of the Death Star parts can be folded and twisted away so they’re less conspicuous. The rest of the Death Star ends up on his back, in a style similar to Cybertron Primus, giving Lord Vader a very majestic feel. 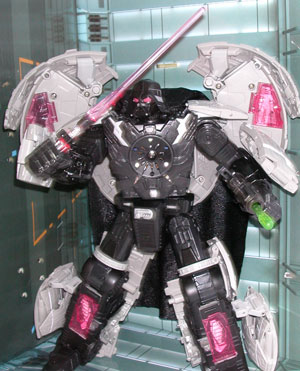 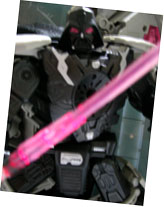 Most of this bulk can be concealed with the use of cloth cloak provided, yes… you heard me right, it comes with a wicked cloth cape that can be attached to Lord Vader’s back! This can be rolled up and kept in the concealed compartment in alternate mode.

This is simply the best-looking Star Wars / Transformer figure to date! 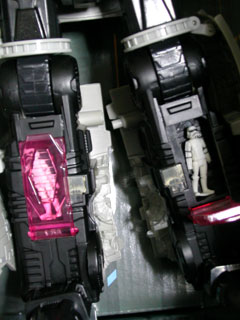 Vader is very well proportioned in this mode. The head sculpt is probably the most accurate amongst the 2 other Vader toys in this line (other than the red eyes).

Lord Vader’s limbs are a lot blockier than his movie persona but it is very appropriate to his robot form. 2 transparent red doors can be found on his shins and on the parts of the Death Star that folds behind his shoulder. These are the holding compartments that hold the 3 mini Storm Troopers and a Mini Lord Vader.

The lights and sounds in this mode are pretty spectacular. Without the Light saber in his hand, pressing his arm button will emit the sound of his blaster. When the saber is inserted into his right hand however, the sound changes into the saber powering up and the unmistakable sound of a humming saber.

Pressing the arm button repeatedly with the saber attached gives you the sound of the saber parrying and swishing around. Pushing his chest button gives about 5 different movie phrases accompanied by lights and wheezing. 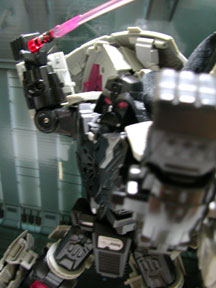 In Death Star mode, there’s about as many poses you can get out of a soccer ball, meaning 1 single lean, mean, planet destroying, rebel smashing pose. 4 little legs can be pulled out from the bottom of the Death Star to keep your space station from rolling off the desk.

In the robot mode, Lord Vader is rather posable. He has a full range of motion in most of his joints. Even though his ankle is not jointed, his feet can rotate about 180 degrees horizontally, creating the illusion that his feet are firmly on the ground regardless of the pose.

It’s a pity they couldn’t make the fingers jointed but it’s probably due to the electronics in his right hand.

All the joins twist and turn with solid satisfying clicks, allowing all kinds of awesome poses.

I’ve never been a fan of the Star Wars / Transformer line due to their strange proportions and fragile handling and have never been bothered to buy one prior to this. The Death Star / Lord Vader is one solidly constructed toy with superb looks; the electronic sounds are spot on and adds to the desirability of the figure. My only peeve is that there is no place to store his saber in alt mode. This figure is quite simply a must have for both Star Wars and Transformer fans alike!