Function: Decepticon bounty hunter.
Motto: "Run all you want, it'll make the chase more fun."
"Lockdown could care less about Megatron and his grand goals of universal domination. He's in the game for upgrades, pure and simple, and he wears the Decepticon badge because they're the ones who can get him the systems he wants. For the right price he'll hunt down any target and bring it in - functioning or not. As a bonus, every new target means new trophies for his workshop wall. He enjoys his work, and he's traveled from one end of the universe to the other doing it, which is why he's got a collection of weapons and functions second to none."


Transformers: Animated is the upcoming Transformers television series, slated to open with a special premier on December 26. This series has caused quite a bit of controversy amongst fans due to its brand new artistic direction, bringing aesthetics to Transformers that have never before been experimented with. A number of toy prototypes have been shown to the public, and recent eBay auctions gave collectors a chance to obtain a few figures almost six months before their rumored release date. I managed to get one of the Lockdown figures put up for auction. Please excuse the poor quality pics, I've only got a camera phone here at college, and my "lightbox" was hastily thrown together using my desk and a sheet. Now, without further ado, the world's first review of Transformers: Animated deluxe class Decepticon bounty hunter: Lockdown. 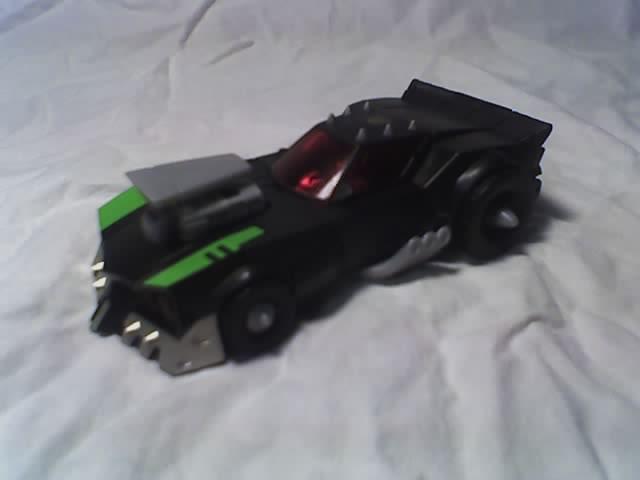 Prior to his brief run on eBay, nobody had gotten a really clear look at Lockdown's vehicle mode. Once better pictures were available, fans had a generally positive and enthusiastic reaction, and with good reason. Lockdown's alternate mode is a stylized muscle car. The primary color is black, done in a new "matte" fashion introduced for the first time with the TF: Animated line. There are two lime green sections painted on the sides of the hood, and the bumper, spikes on the roof, and back of the spoiler are painted silver. The exposed engine, hubcap spikes, and side exhaust pipes are cast in light gray plastic. The windows, headlights, and taillights are translucent red plastic. A small, gold Decepticon emblem is stamped on the roof. Overall, the paintjob is good in this mode. I really like Lockdown's vehicular form; it's one of the coolest car modes I've seen in a while. It looks sleek, yet powerful and menacing. It sort of reminds me of Cybertron Downshift's alt. mode, mixed with a newer Batmobile model, only ten times cooler. 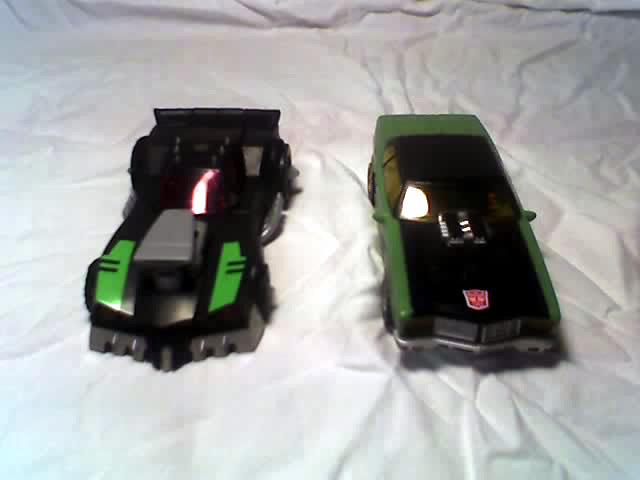 Since I got this off of eBay as just a prototype, it did not come with any kind of instructions. Luckily, I had the help of reference pictures. His transformation is easy. (Note, I added these later, with the proper transformation. The rest of the pics for Robot Mode show him mistransformed).

Rotate the legs forward and detach the engine/weapon. 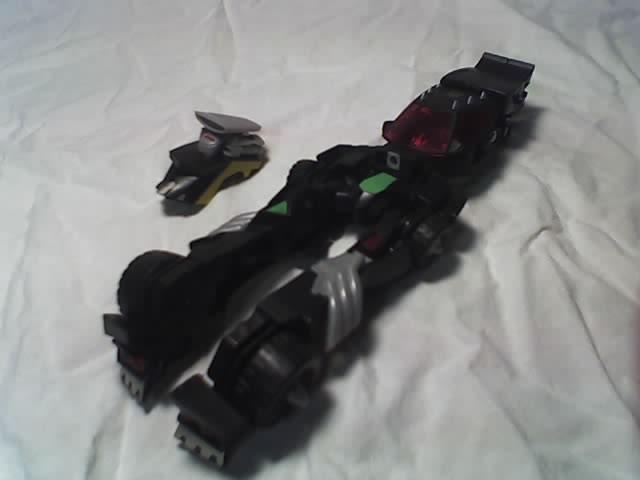 Stand him upright, rotating the rear bumper pieces up as feet. Pull the legs down like so, so you can see a gap. 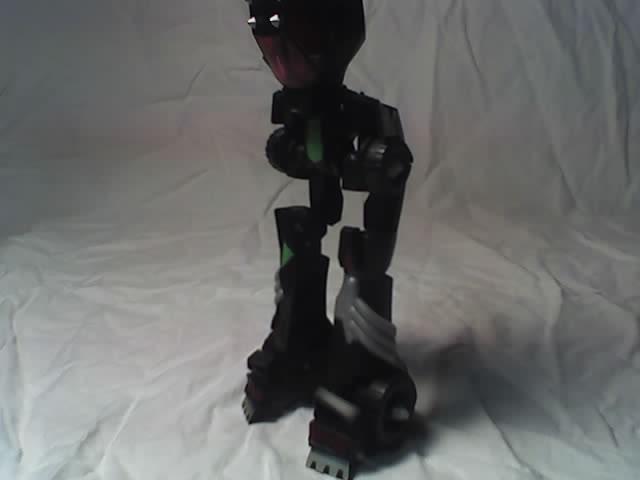 Bend the legs back at the knee, then rotate the headlight pieces down and they will snap into place. 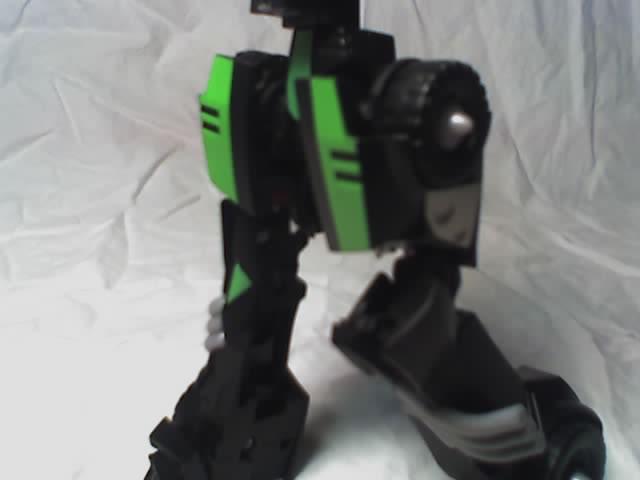 Rotate the torso 180 degrees. Separate the arms and swivel them forward, and rotate the hands out. Open Lockdown's chest, and pull his head up. 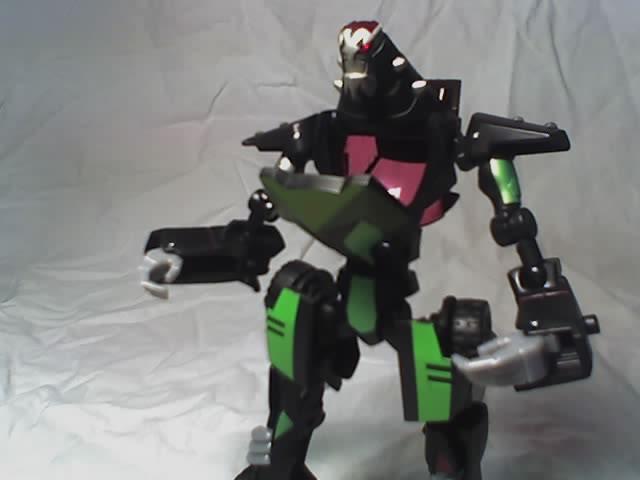 Take the weapon unit, flip the hook out, fold his hand back and attach the weapon to either arm, though the gimmick is only triggered on his right arm. 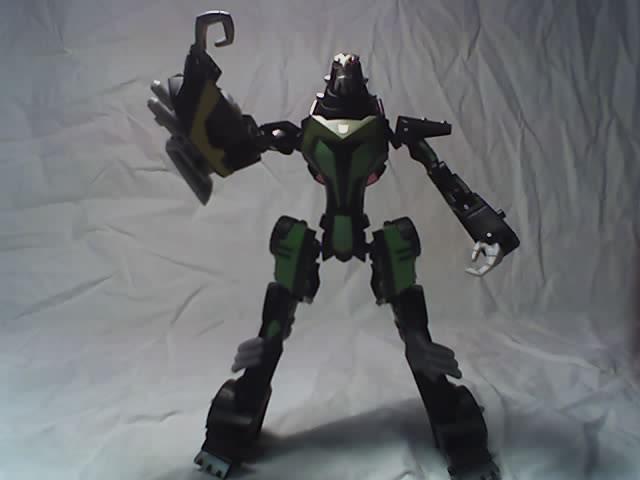 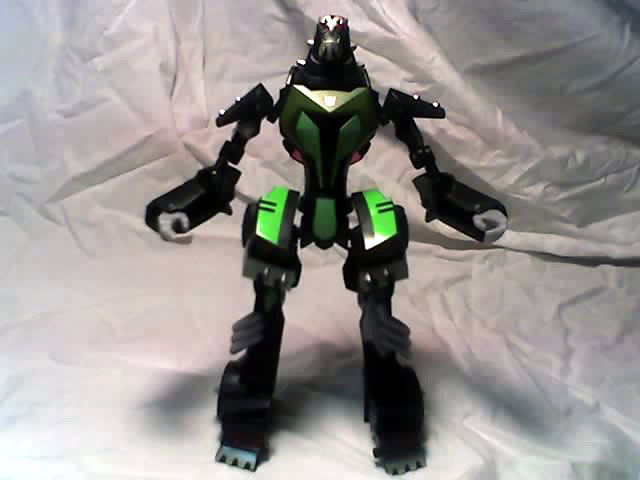 When people first saw the animation models for TF: Animated Transformers, many believed that it would be impossible to have transforming figures that would resemble their animated incarnations. Hasbro proved this wrong, however, providing transforming toys that almost perfectly resemble their on-screen appearance. Lockdown is no exception. His robot mode is nearly dead-on with the cartoon version of the character that was shown. 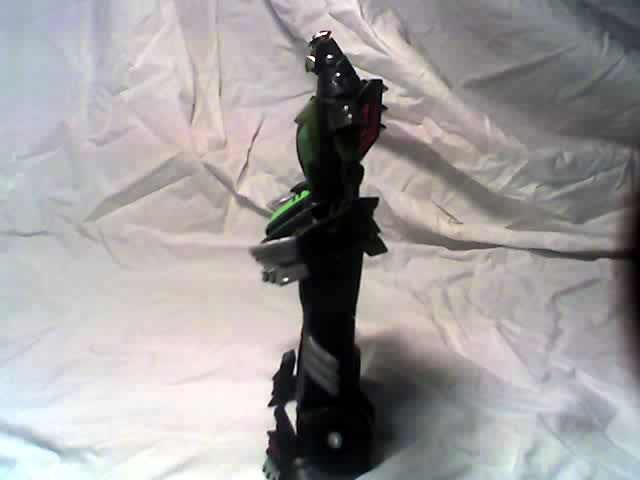 Black remains the primary color in this mode, with more lime green and olive green paint mainly on Lockdown's chest, which has a gold Decepticon emblem stamped on it. His hands are gray plastic, as are the exhaust pipes and engine block/guns, with the hook weapon painted silver. There is some yellow paint on Lockdown's engine/gun weapon. His face is painted mostly silver, with black detailing and red light piping for his eyes.

This mode is great. Lockdown looks like a no-nonsense, intimidating robot. Though some fans don't really like the "cartoony" head sculpts used for TF: Animated toys, Lockdown's is definitely one of the best of the bunch out of what we've seen. It's unlike anything we've seen for a Transformer of any other series, but it is very alien and sinister-looking. The four spikes on the sides of his neck add to this look.

Supposedly, Lockdown is going to be a bounty hunter, and have a personality similar to Boba Fett; the infamous Star Wars character of the same profession. He's also supposed to have some characteristics of the Predator, and be able to take on all the Autobots by himself. I could definitely imagine him in this role just by the way he looks. He's also taller than most deluxe class figures, so I'm sure your Autobots will be intimidated by Lockdown. 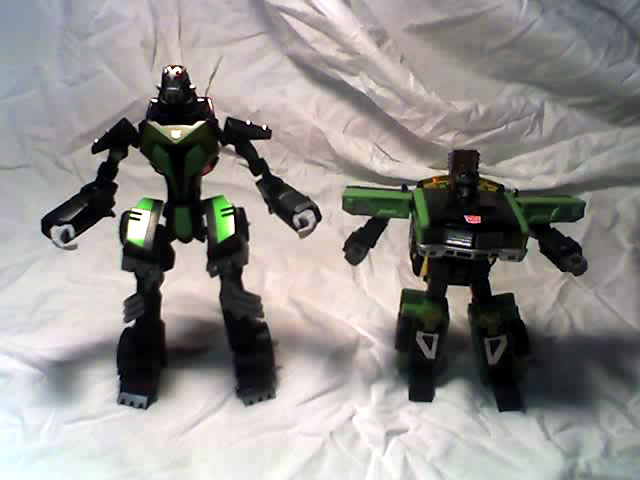 Lockdown's main weapon in this mode is the engine block/double-barreled gun which is mounted on either arm (I handn't figured out how to activate the barrels at the time I took the pic, but I now know that you have to press the unit onto his arm and the barrels flip out). He also has a mean-looking hook that protrudes from above his right hand. Based on released animation pictures of Lockdown, this hook could be a trademark characteristic. 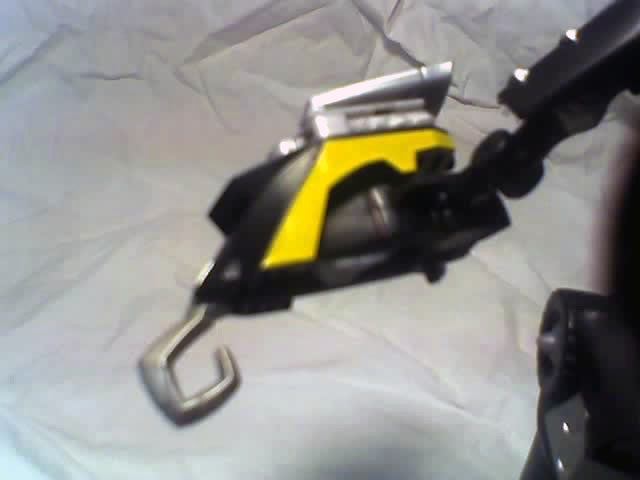 Overall, Lockdown is an excellent Transformers figure, surpassing a number of figures from the Movie line and previous lines. Hopefully this holds true with the rest of the TF: Animated toys. If you're on the fence about the Transformers: Animated toys, I suggest getting Lockdown, he might win you over. If you plan on collecting TF: Animated figures, Lockdown is a must-have. If you don't like TF: Animated at all, get Lockdown anyway, because he's just that cool. Recently, it was revealed that Animated toys will be pushed back to a June/August release. So put $10 aside for when this guy hits shelves; Lockdown's not one to miss. 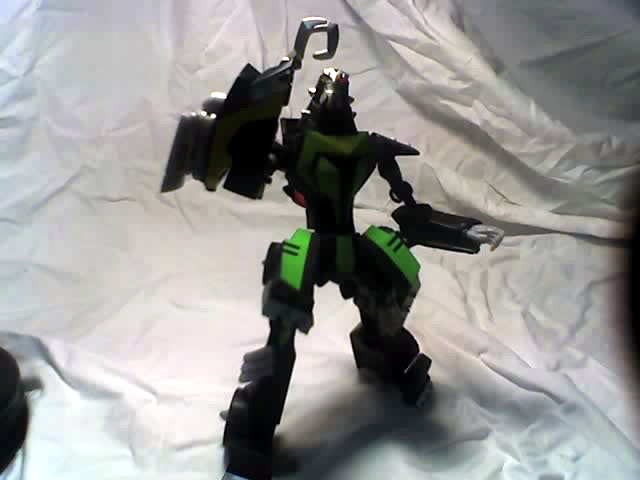 Here is a picture of Lockdown properly transformed. The car parts on his hips fold in above his knees, and his legs extend downward more. You can also see the extended gun barrels. The weapon gimmick works by pushing the weapon down on his right arm only, but the weapon can be attached to either arm. 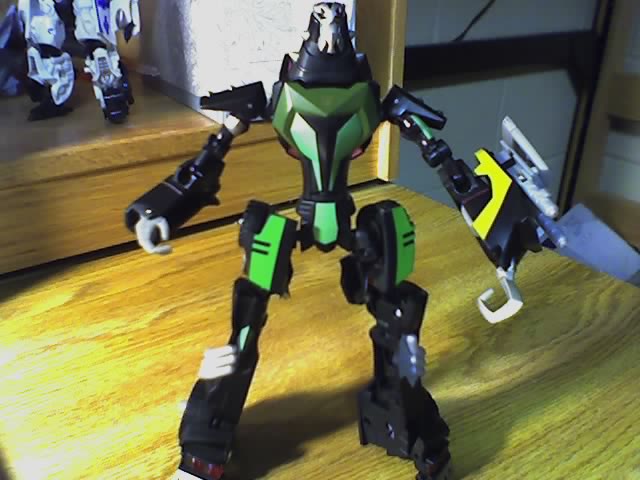 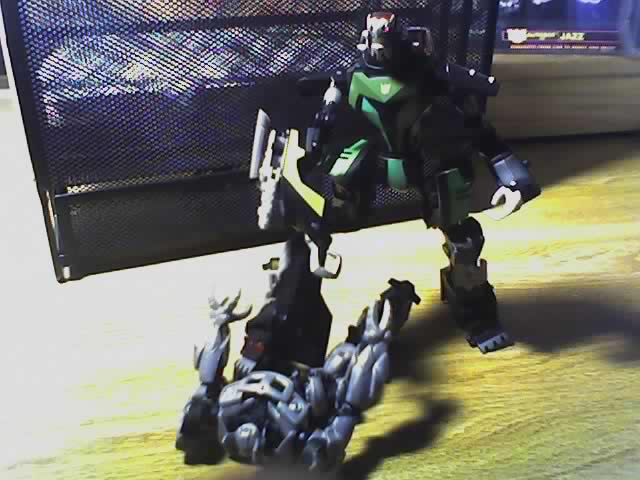 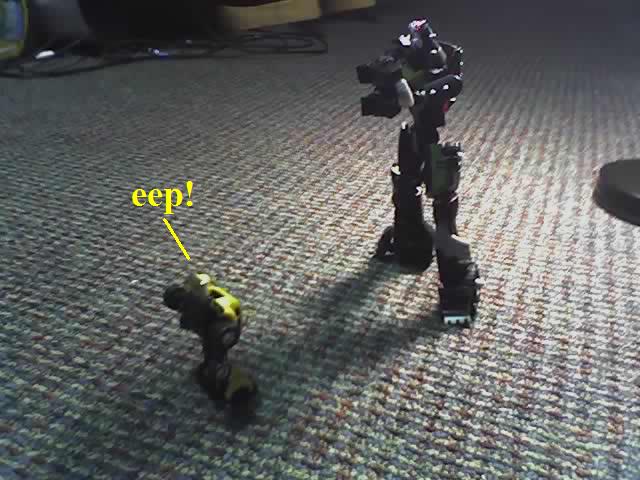