One of the new characters to the TF universe is Lockdown. A bounty hunter without allegiance except to "mods", he'll bring anyone or anything in for a new weapon or upgrade to his system. This review takes a look at the action figure.

"Run all you want. It'll make the chase more fun."

Lockdown could care less about Megatron and his grand goals of universal domination. He's in this game for upgrades, pure and simple, and he wears the Decepticon badge because they're the ones who can get him the systems he wants. For the right price he'll hunt down any target and bring it in - functioning or not. As a bonus, every new target means new trophies for his workshop wall. He enjoys his work, and he's traveled from one end of the universe to the other while doing it, which is why he's got a collection of weapons and functions second to none.


Blaster shuts down most robotic circuitry
Can track a target even across light years
Once a target is locked, he always catches it 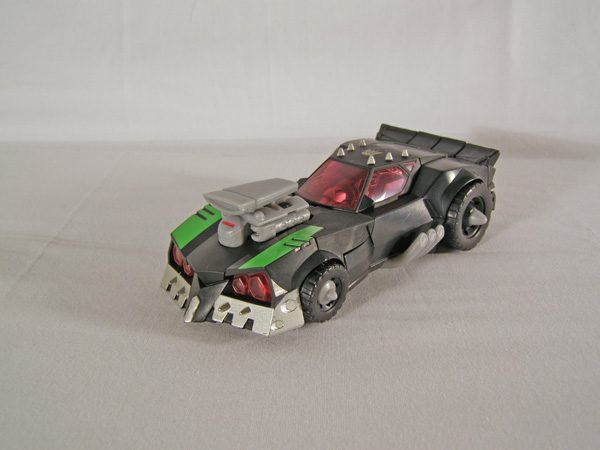 Lockdown takes the form of a modified muscle car for his alt mode. The car looks like a goth metal rocker's dream. It is done in matte black with green accents on the front fenders. The windows, headlights and taillights are done in translucent red plastic. The roof is also studded with 6 pins. He also comes with a serrated front bumper, pinned center caps for his wheels and side pipes. As if those custom bits weren't enough, there's a big engine blower sticking out of the hood. 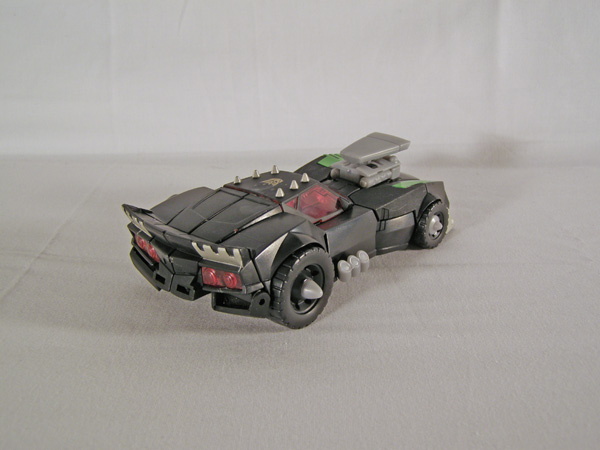 Lockdown is extremely low to the ground, so be careful if rolling him. Also, the matte black does a great job of showing up fingerprints. Besides those minor nuances, this is a very creative alt mode and gives the aura that this bot means business. The only way you could improve the alt mode is by maybe painting the rear windows to match the windscreen. The window panels are there, but are just in matte black.

Lockdown has one of the more interesting transforms. First, pull the rear fenders away from the center of the rear end. This should take the entire sides out just a little. Then, lift the hood section up and remove it from it's pin. Next, take his headlights and flip them down 135 degrees. You can then spin the sides around 180 degrees to form his legs. Pull on the legs to expose his knees. Take the taillight section and pull it back 90 degrees to form his feet.

Now, take the cockpit and swivel it 180 degrees to expose his chest. Then, take the rear section and fold it up 180 degrees. You can now pull his arms down. Rotate his forearms 180 degrees and flip out his hands. Be careful, as the hands don't go out in a complete 180 degree half circle, but only 105 degrees. This is due to the obstruction within the panels. Don't forget to lift up his shoulder plates. Finally, pull down his chest plate so you can flip his head up. Once you replace the shoulder plate, you're pretty much done.

To take it just a bit further, we'll go back to that hood piece you removed earlier. Remove the blower from the hoodpiece. You'll see a hook under the hood, so flip it out. Under the blower, you'll see a small button. Press it, and 2 barrels will spring out. Now, replace the blower on the hoodpiece. Fold up the hand on whichever arm you want to attach this weapon to and clip it to the peg. 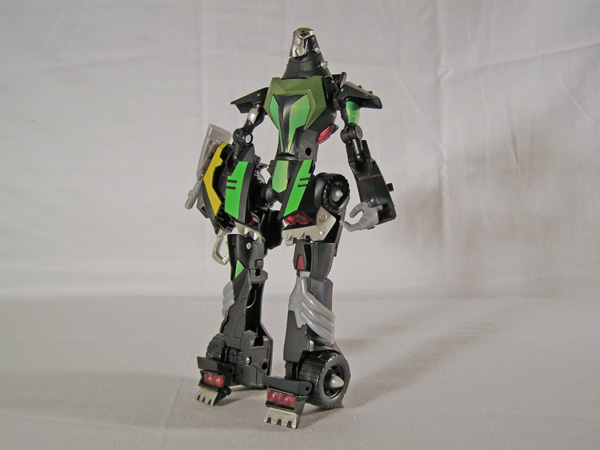 Due to the transformation, Lockdown ends up being one tall dude. Taller than even some of the Voyagers. He has good show accuracy, and the colors are right on in that respect. The face is also well done and accurate. For further enjoyment, he has red piping in the eyes. 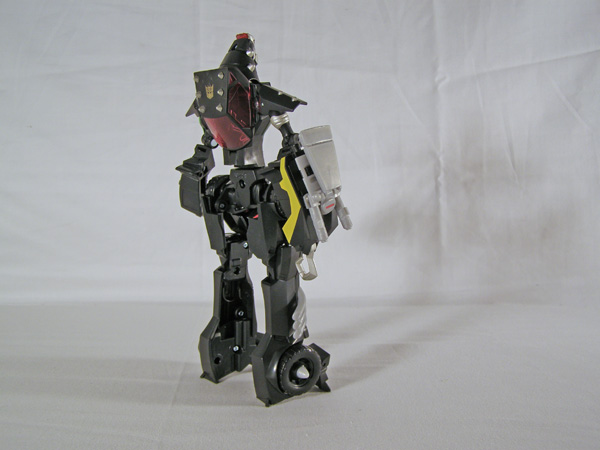 The only complaint I have about this figure is the hands. As mentioned earlier, they don't fold out completely 180 degrees. This is due to a panel that holds the pin which hinges his hand. There's not much that can really be done about it without major modification. One thing to note, the blower assembly can also be used on Ratchet's left arm, as it is actually Ratchet's EMP generator which Lockdown stole long ago. 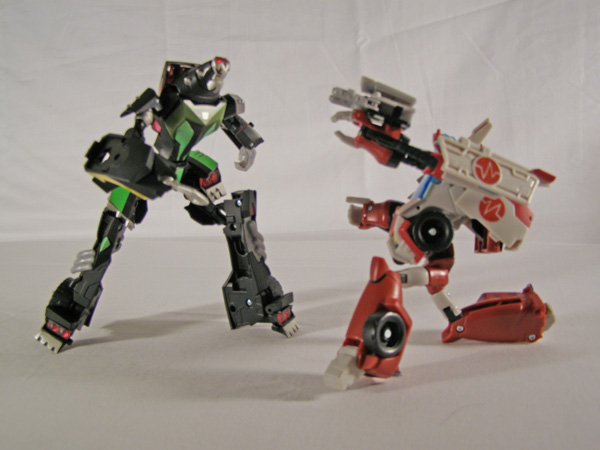 
The legs are a disappointment, with limited posing ability. The arms fare better, but the hands again look out of place.

: Great alt mode. A bit low to the ground, though, and the matte black shows prints.
Robot Mode -

: A big brute, but limits on poseability. Overall -

: Not one you want to burn the barn down trying to find, but nonetheless a decent add to the collection, especially if Ratchet is in your collection.
Size Class: Deluxe
MSRP: $10