Normally, when a line offers several different version of the same character, it's a popular character. Although I wouldn't have pegged Bulkhead as one of the most popular, Hasbro would think otherwise as we now have three versions of him. The Voyager figure seemed somewhat out of scale with the other figures. Hasbro must have figured this out, for we now have a much larger Leader version at our grasp.

It's hard not to like Bulkhead. Despite being huuge and stron, he's the kindest, most gentle of the Autobots, and he always has other people's best interests at heart. He's also a klutz. That's why it's so terrifying when the Headmaster takes over his body. Bulkhead regularly engages in wholesale property damage purely by accident. With the Headmaster in charge of his body, will anyone be able to stop the tide of destruction?


The strongest of the Autobots on Earth
Rarely uses air torpedoes because of accuracy issues
Buzzsaw originally built to slice iron meteors. 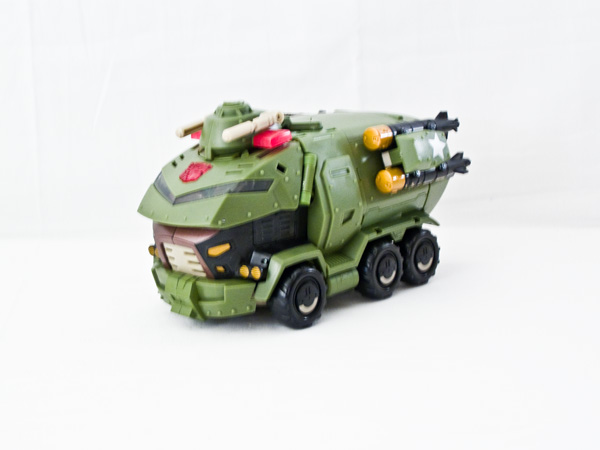 Bulkhead retains his SWAT van alt mode, but with a few mods. For one, while the overall look is the same, the details have been significantly added to. Everything from the grille to the roofline sport heightened detail, as well as much needed fixes (no more sunken roof!). The windscreen, painted black on the Voyager mold, are now clear. The lightbar is also done in a translucent red. 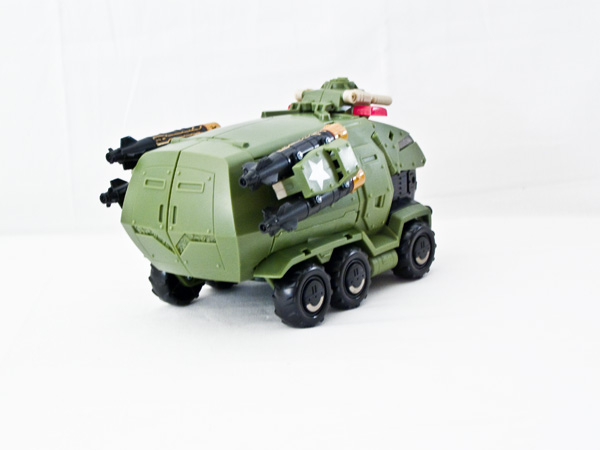 Then there's the weapon upgrades. Between the lightbars now sits a laser turrret packing 2 cannons. Although each cannon has up and down rotation, the turret does not spin. On each of his rear panels, he now sports a pair of air torpedoes. The torpedo base can be rotated 360 degrees and each torpedo is removeable. Finally, if you press the big red Autobot insignia on his roof, his lightbars will blink red and you get a short yelp of the siren. Holding down the button will give a continuous siren and light show.

The transform sequence has a lot of differences versus his Voyager mold. Like the Voyager, you can start by lifting up his rear end. Grab the fuel tanks just behind the cockpit and lift them up. Take hold of his legs on the bottom and flip them out until you also pull the waistline out a bit. This will release a peg that you can lock the waist into. Don't forget to flip out his feet. Fold the rear wheels in, then fold the panel down behind his legs. Release his arms, but don't flip them forward just yet.

Flip the cannon turret back to expose the head (and get a transform sound in the process). Once the turret is off, you can pull the chest up slightly. This will allow the shoulder tabs to properly align and snap in. NOW, while rotating the rear panels 180 degrees, flip the arms around and lock them into the tabs. Spin the torpedo assembly 180 degrees so the warheads face his hands. Slide the rear panel with the wheels up. Fold the roof panel down until it locks into place with the other panel. Close the 2 side panels against his back. Split the rear doors in 2 and spin them until they are 45 degrees above his head. Split the cannon turret in 2 and fold it out 45 degrees. They hide behind the larger rear door overhangs. 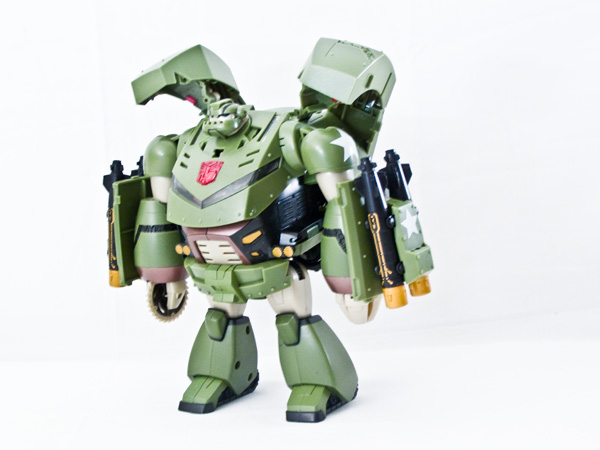 The proportions look MUCH better with the Leader mold. One noticeable difference is that instead of a wrecking ball, he now has a buzzsaw hand on the right hand. This is a permanent fixture and does not come off. On the inside of his hand is a lever. Pressing it forward will spin the buzzsaw around. His left hand has the 3 claws that can be opened and closed with another inward lever. The eyes are not piped, but jeweled in blue. 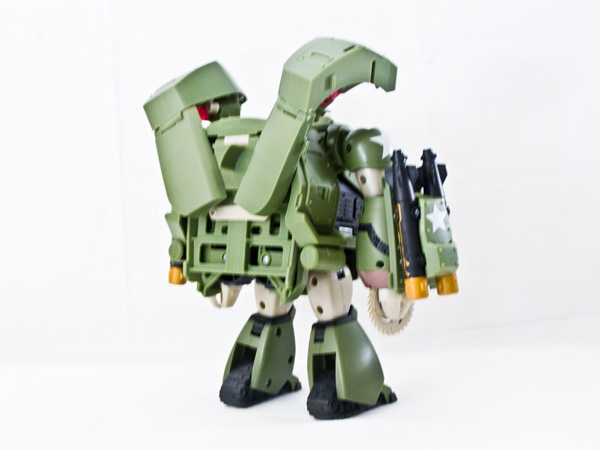 Finally, there is the "chair" mode. You can fold down the roofline as if you were going to transform him back into alt mode. This will form his chair. He sits rather comfortably in it too. Like Megatron, Leader class Bulkhead also talks. By pressing the Autobot insignia on his chest, you can make him say one of three things:

The chest, eyes and shoulders will also blink in yellow. Also, Bill Fagerbakke does the voices. Overall, I have to say for once that I'm impressed with the electronics. Normally, they are dull and don't match up too well. However, they go perfect with Bulkhead. He does have one "hidden" feature, where his accessory comes into play. 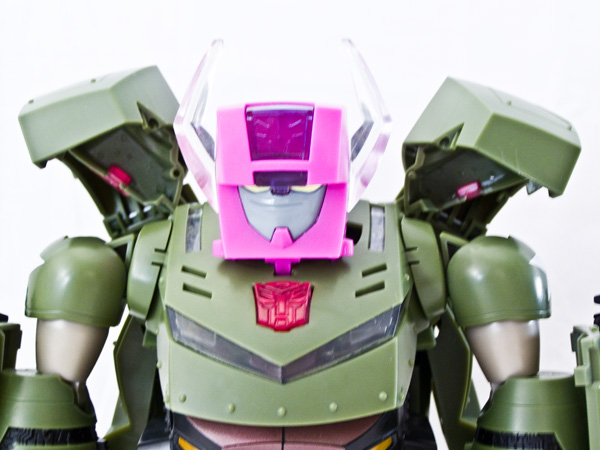 Bulkhead comes packed with Headmaster. It is just a hollow head with the likeness of Henry Masterson's creation. There are 3 tabs on Headmaster that line up to slots on Bulkhead's neck. By plugging Headmaster over Bulkhead's head, you will get the phrase "OWNAGE! TOTAL OWNAGE!". While the chest will blink, there is no piping for Headmaster's eyes. 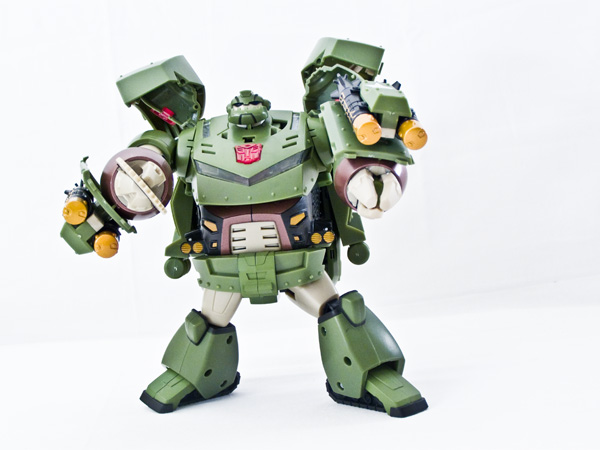 
There are some small snags to his poseability, but overall he has a good setup. Only the head might disappoint, as it's stuck being straight ahead. 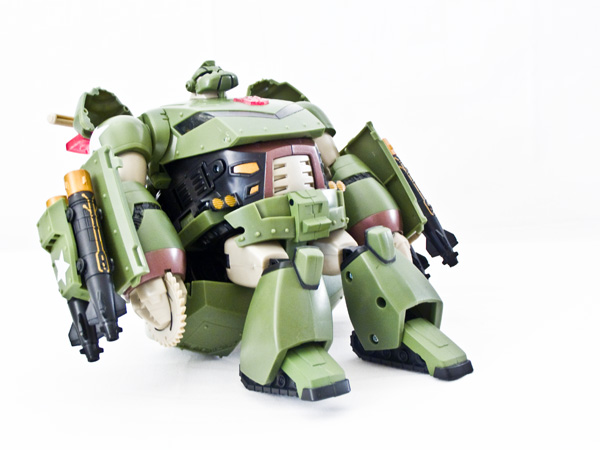 :While seemingly not show accurate, the add-ons definitely heighten his bulk... and playability.
Robot Mode -

:Great just for the ability to correctly scale with the other figures. Very little to fault Overall -

:For those of you who withheld buying the Voyager to get the Leader, you made a wise choice. If you already have the Voyager, trade up!
Size Class: Leader
MSRP: $40